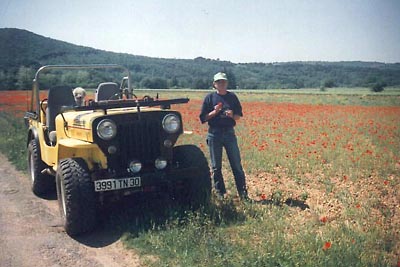 This story started back in 1983 when for my engineering graduation, my parents bought me my first car: a Hotchkiss M201 Jeep with a Peugeot diesel engine (see the photo at the bottom of this page). This car was fine for my tight student budget but was really underpowered for the serious off-roading I began to do in the 90's, like the Trophee Cevenol and an Alps crossing. Many steep grades ended with me standing on the vanishing brakes and waiting for a helping rope. Frustrating!

Reading Jimmy Nylund in Four Wheeler confirmed my idea that a Range Rover V8 in a flatfender was possible, despite all the opinions I heard in France. The Internet was not really existing at that time. I started hunting the right model, not wanting to dismantle my old friend. I first missed a CJ-3A in original state... 10 years later I still wish I had got it. I bought the CJ-3B in December 1989 in Belgium -- it had been used on construction sites and the body was sound but deeply battered. It's an early model with MB-like instruments. 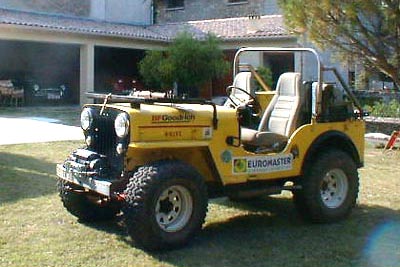 I prepared the Jeep for driving back to Normandy, and It took nearly 8 hours driving to cover the 400 km, but I brought it back. It had an early Mercedes diesel engine that was smoking all it could. After some time driving the Jeep with that engine, I started the modifications. Basically the key is a cut Range Rover bellhousing with a gear box adapter plate welded to it. Yes, Rover aluminium can be welded! One tricky thing is the oil filter colliding with the front pumpkin. Easy to fix if you have an MG parts catalog -- just use the oil pump cover for a V8 MG, and a remote oil filter. I believe it also works with the Dauntless V6.

Custom motor mounts were made from Rover's. Engine and tranny were moved a little right and forward to clear firewall and pedals. Exhaust was made using stainless steel rocket engine pipes (all the work was done at the Ariane space launcher factory in spare time!) Cooling is by a rebuilt CJ radiator (after a broken one). Body lift on hardwood is 2 inches. Seats are Jeep Wrangler, instruments are by Motor Meter, roll bar is SS pipe and is built as an air tank... waiting for ARB. Front brakes were recently upgraded with 4-Wheel Parts drum brakes. Front winch was bought in Oman and brought back with the Wrangler Renegade, and is a 9000 lbs. unit. 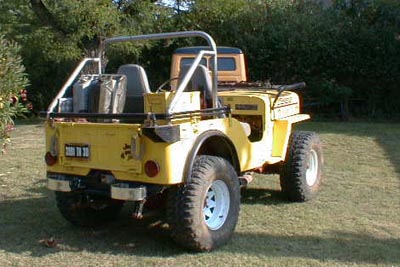 What is great with the V8 apart from availability in France and cheap price for engine and parts is that it is lightweight, giving a very cheap front suspension lift (just put in longer shocks). Rear was modified using WW2 Dodge axles and custom shackles.

I remember reading that Hotchkiss sold all their toolings for the Jeeps to VIASA in Spain, including the long wheel base Code HWL (petrol) and HWLD (diesel). Further investigation conducted by my friend Michel Bersano in France showed that these HWL were fitted with an extra low T-case with a 3.81 to one reduction. This T-case used a modified casing to accomodate the bigger gears. It seems that this new casing was then used on other models but with MB type gearing. Unfortunately we could not locate a complete box, but the hunting goes on. We managed to get the last "kit agricole" from the French Jeep specialist "Boucher GSAA," and my friend is now building a new T-case for my 3B to get a 1 to 3.3 gearing.

As you see, this project (building time 6 months) was based mainly on Jeep family parts, with minimum modification to chassis or brakes, in order to avoid dependability problems. Apart from a blown clutch disk (a new custom-made one replaced it) and a plugged fuel tank outlet (2 years of problems), this car is great and my favorite because I built it.

Now I'm looking to rebuild a vintage CJ-2A or 3A to match my station wagon (see below). I hope I can find the same 3A I missed. -- J-F Lavie

Here are some more photos of Jean-Francois' Rover V8-Powered CJ-3B:

Thanks to Jean-Francois for the story and photos. Since he wrote this in 2001, he's been busy searching out more restorable vintage Jeeps including a 473-VJ Jeepster and his Project Bristol Red, a former Swiss Army CJ-3B. -- Derek Redmond

See also photos of J-F's yellow CJ-3B at play, and on display with more of his growing Jeep collection at European Camp Jeep.

The 3.5-litre Rover V8 from Britain is a more likely conversion for owners in the UK or Europe than in North America, but over here it might also be possible to find the V8 in a scrapped Rover SD1 or a wrecked Range Rover. More information on the engine is available on the web in an article by Mike Jeffreys on putting it into the Triumph TR7. It was actually originally a Buick V8, bought by Rover in the mid-1960s.