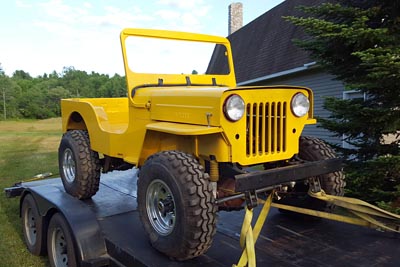 The only original parts now are the frame, grille and hood. Everything else is new/rebuilt. The original engine expired and now it runs a Chevy 4.3 Vortec V6 from an '03 Astro, and an NV4500 5-speed from a '94 GMC. New body from Willys Overland. Tons of other parts. Still not quite done, but almost. It's '73 Corvette yellow, just something I liked. American Racing wheels with 32" TSL Radials. Also has 4 wheel disc brakes and a vintage Warner 8274 winch.


Lance has moved from Maine to Bentonville, Arkansas, and says, "My son and I drove back to Maine last summer and trailered the 3B back here."

He originally sent some photos in 2001, and he was right when he wrote at that time, "Thought you might get a kick out of my '61 in skidder mode." 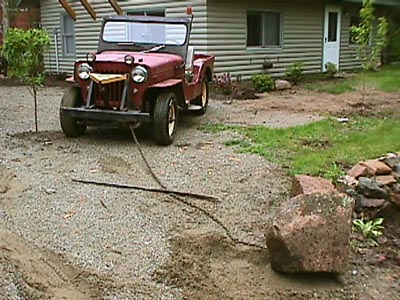 He said, "I had a dozen of these granite blocks way out in the woods but the 3B yanked them out without much trouble. Not sure of the actual weight, but it was all I could do to move them into place by hand after they were hauled out of the woods. Most of them were like icebergs, 15% showing with the rest underground." 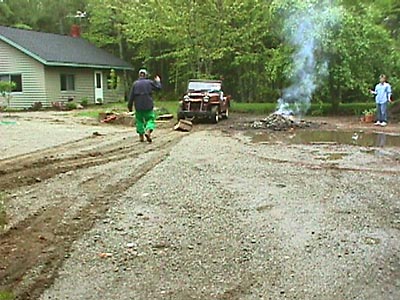 "I have a 2000 GMC 4WD truck but I hated to scratch the paint driving it through the woods. I didn't think the 3B would move them. Turned out that most of them could be extracted without giving it any gas -- just put it in low range and let the clutch out. My neighbor, the guy in the green pants, seemed pretty surprised. He spent most of the winter predicting that the Willys couldn't plow much snow, either, but I had no trouble despite the huge snow amounts." 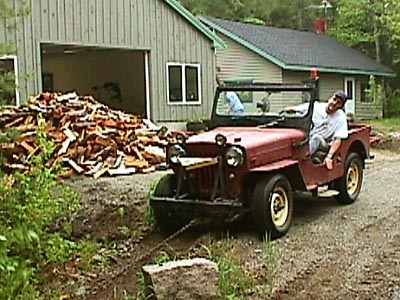 Lance's 3B was purchased from the original owner, with a 6ft. Fisher plow. It only had 28,000 miles on it, but after a lifetime of snowplowing the body was showing a lot of rust. He said, "I'm going to take the Willys apart shortly and I'll update you with pictures as I put it back together."

Thanks to Lance for sending the photos in 2001, and the update 16 years later! -- Derek Redmond