According to previous owners, this 1956 CJ-3B originally served in the motor pool at Los Alamos National Laboratory (LANL), the federal government scientific facility in New Mexico set up in 1942 as the home of the Manhattan Project, developing the first atomic bomb.

The Jeep was previously featured on CJ3B.info as the Desert Bulldog, after it had been painted white by Robert Diaz, its third private owner. When the white paint deteriorated, current owner Todd Marquart decided to return the Jeep to a look more appropriate to its role at LANL. 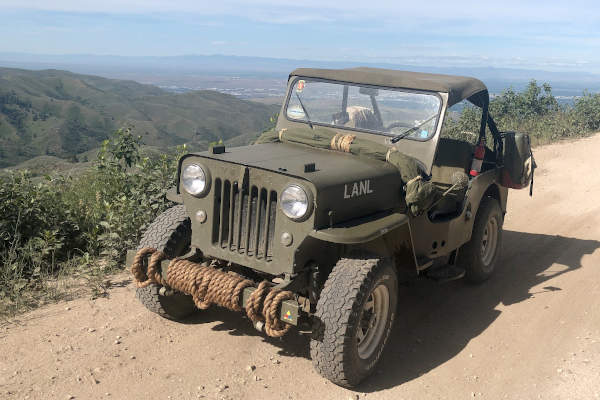 Many government Jeeps tended to be Olive Drab or GSA Gray. Examination of the paint layers (see the underside of the hood, 230K JPEG) suggested this one was originally painted red, but Todd didn't want red, so he decided to go with OD.

The red paint does raise the question of whether the Jeep was perhaps connected with the LANL fire department. It apparently was equipped with a two-way radio, and radio antennas may have been the reason for the two holes cut below the driver's door. 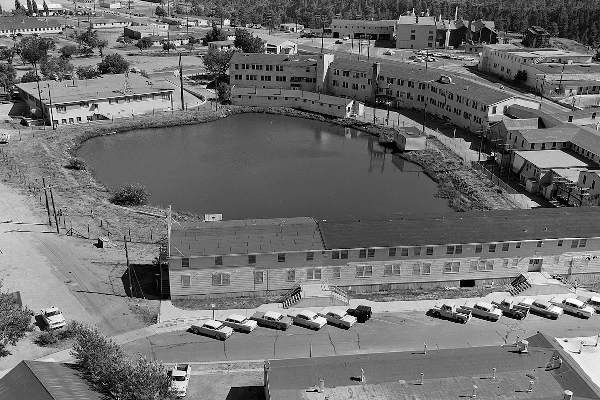 This 1957 photo shows Ashley Pond in the center of the Los Alamos National Laboratory, surrounded on three sides by the Gamma Building, which held offices and laboratories. Is that Todd's Jeep parked in the foreground? We don't know how many Jeeps were running around LANL in 1957, but probably quite a few.

Ashley Pond was actually named for Detroit businessman Ashley Pond, founder of the Los Alamos Ranch School, a boarding school connected with the Boy Scouts. The school's land was purchased by the government for the secret Manhattan Project in 1942. 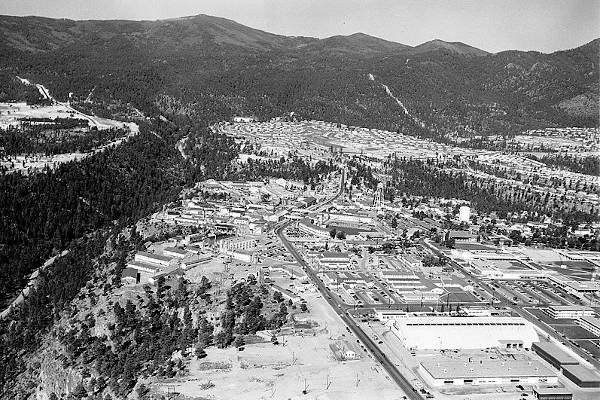 Ashley Pond is also visible in the middle of this wider view of the Los Alamos facility, circa 1950, along with the water tower from which the above photo was taken.

Today, Ashley Pond Park is a downtown landmark in the city of Los Alamos, located beside the Manhattan Project Visitor Center. LANL is now one of the largest science and technology institutions in the world, conducting multidisciplinary research for national security, space exploration, nuclear fusion, renewable energy, medicine, nanotechnology, and supercomputing. (Wikipedia) 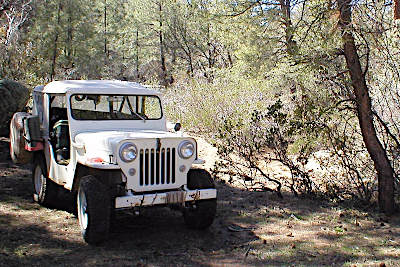 Todd was living in Laveen, Arizona when he bought the white 3B from Robert Diaz in 2000, and he didn't waste any time in showing the former "Desert Bulldog" some new territory. He says, "We used to head up into the mountains about once a month." 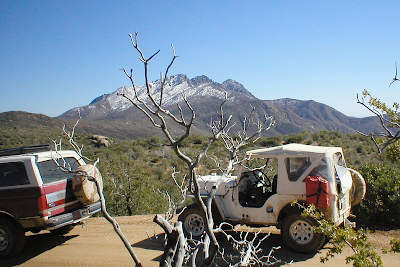 Todd snapped this photo of the Jeep just north of the famous Four Peaks in the Tonto National Forest near Phoenix, and adds, "The truck belonged to Frank Mosna; he was the leader of the 4WD club I used to run with." 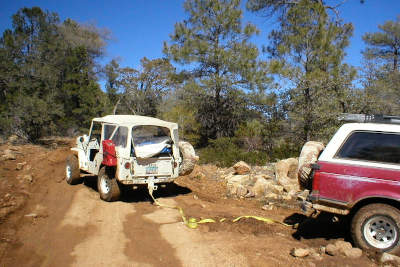 "I like that I had to pull his truck out of being stuck with my little Jeep." 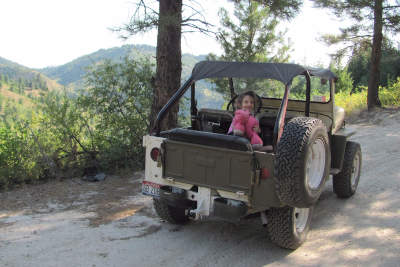 "Here's a transitional photo as I started to repaint her bit by bit. I just could never have her down for too long. It was all done with cans of spray paint from Rapco, so touch ups are easy.

"I am confident that Robert was correct that the original color was red. In fact, that red paint was one of the reasons I decided to re-paint her since it was bleeding through the pearlized white Robert had used, making her covered in pink splotches!" 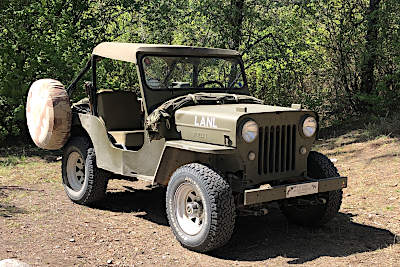 "I want to find five 16" rims and get NDT tires put on her. I actually tried it out by putting the wheels from my M170 ambulance (230K JPEG) on her. It looks way cooler!"

"I have an industrial sewing machine and made the current bikini top from some canvas my wife had bought. I liked how it came out and decided I would like to make my own soft top. Canvas is expensive, but I saw military surplus tents dirt cheap at the army surplus store so I bought a bunch of them. One of them still had the poles and stakes and I just couldn't see cutting it up, so I rolled it up and tied it to the cowl for an emergency shelter. One of my next big projects is to make a canvas half top of my own design." 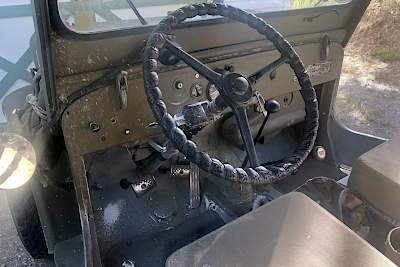 Todd also made shifter boots (140K JPEG) from military canvas. He says, "The rubber ones just don't hold up, so I sewed these together myself. Actually the rubber boot is underneath which helps keep the shape."

In addition to the mystery of the red paint, I was puzzled why there was no large government "nomenclature plate" on the dash, as seen on most military and civilian federal vehicles. I could see only two screw holes beside the Willys information plate.

Todd discovered that a 1954 CJ-3B (60K JPEG) seen on eWillys had this small brass plate in that location. (See also a similar plate on a fire Jeep from an Atomic Energy Commission facility in Kansas City.)

So apparently the vehicles were not supplied through normal government purchasing channels, but were bought directly by LANL. Maybe somebody there liked red, or just needed some vehicles quickly and didn't care about the color. 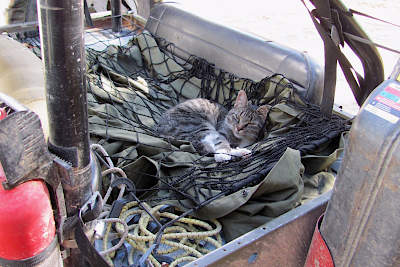 Here's somebody who certainly doesn't care about the color. Todd sent this photo, saying, "Since everyone shows dogs in their Jeeps, I figured I would show my cat, who also likes to sleep in the sun on the top." 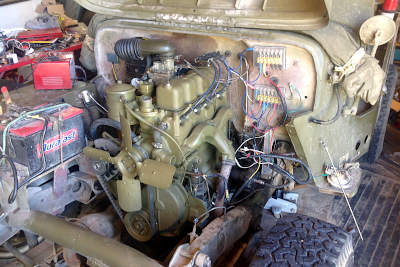 Todd pulled the engine in order to replace the rear main seal. He says, "Since I had it out I went ahead and cleaned and painted the engine. What a job, it was filthy. I just stuck with the same OD I had used for the body. I also took the opportunity to replace the clutch which is when I found the broken springs that had been giving a strange "rattle" every time the clutch was pushed in since the day I got the Jeep. We also checked the bearings and everything looked good in the engine so no need to tear it down any further; she runs strong and gets good mileage." 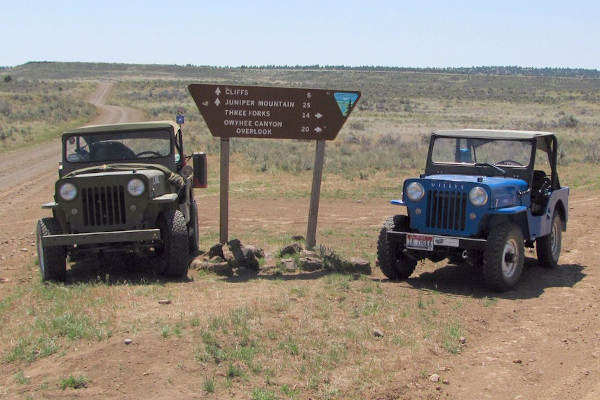 In 2003 Todd moved from Arizona to Boise, Idaho. In 2009 through the old CJ3B.info forum he met Doug Hoffman who had also just moved to Boise with his 1963 CJ-3B. Eventually they started doing some offroad drives, and Todd says, "This shot is from a trip Doug and I took to Three Forks Recreation Site, just over the Oregon border. This is the intersection of Soldier Creek Road and Coyote Point Road." 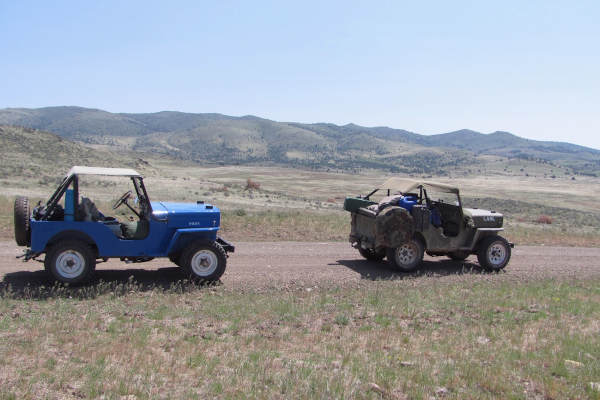 Todd grabbed a photo of a rattlesnake (300K JPEG) in the middle of the road who took a strike at the tires as they rolled by. 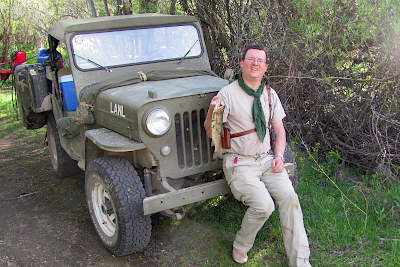 Todd also remembers, "We had good luck fishing and cooked them up for dinner that night on the campfire (380K JPEG)." 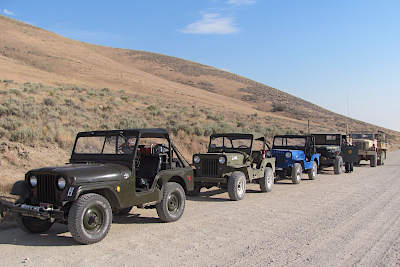 Todd and Doug met several other people with Jeeps and military vehicles, and organized some trips with them. This was a vintage convoy to Silver City, Idaho. In front of the two 3Bs is Jack Boggetti's M38A1. 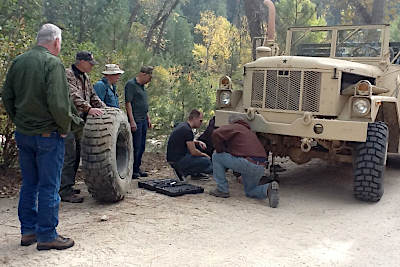 Todd says, "This was our first convoy up to Idaho City. As sometimes happens we ran into a little trouble with the 6x6 getting a flat. Not an easy fix with tires that big." 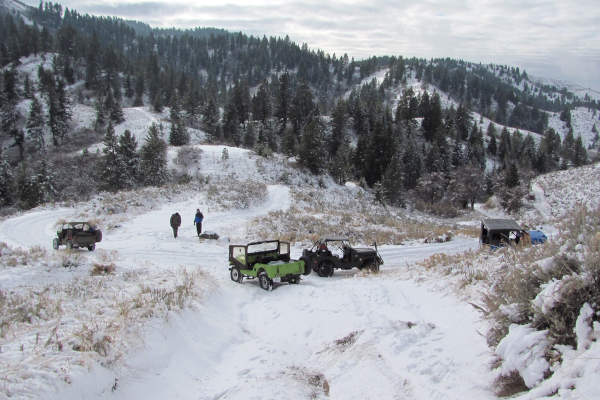 "I wouldn't say I do a lot of winter 4-wheeling. I want to do more once I get my canvas half top completed. (I have a heater installed.) These pictures are probably the first full winter 4-wheeling we had attempted. This particular spot is called Aldape Summit, east of Boise between where I live and where Doug lives." 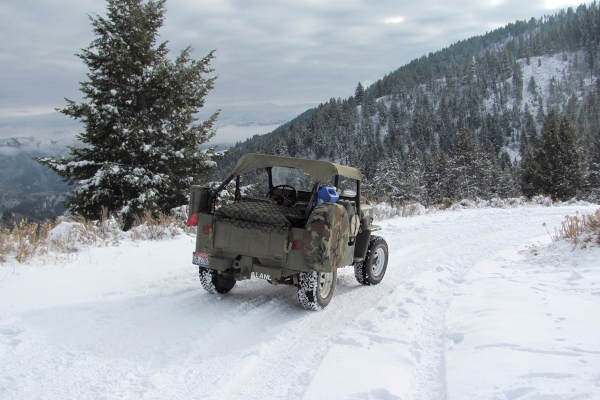 "We didn't get very far; the roads are steep and the the snow was very slick. We turned around pretty quick. I had chains, but considered those for getting out of trouble, not into trouble. We were sliding all over and fortunately nobody went into the ditch! It was pretty cool to try. I think with chains we could have gotten much further."


Thanks to Todd for the photos and information. This is one Jeep that has come a long way from running errands around Los Alamos. -- Derek Redmond