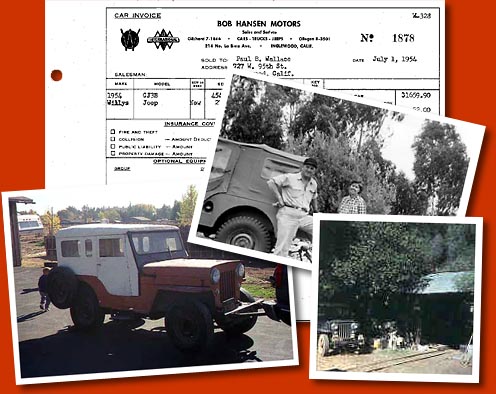 Owner John McClenathen says, "My grandfather Paul Wallace bought this Jeep new in July of 1954 and used it until he passed away. I have been going though my grandfather's papers that were in his shop, and came across the original bill of sale (30K GIF). He paid $1740.00 according to the bill of sale.

"He used to drive it in the summer from Los Angeles to Mariposa (outside of Yosemite) to use at his gold mine. The little photo on the far right was taken in the early 70's at the mine, before its one and only paint job (he painted it to match his 1972 Chevy truck/camper which he used to tow the Jeep camping.)

"I remember one day we were at the mine lengthening the rails for the ore cart dump and we needed to get some straight pieces out of a pile of used rails. They look just like the standard railroad rails but are half the size. I tried to get some pieces out of the pile but couldn't pull them out. My grandpa decided to use the Jeep. He hooked up the chain to one about 30 feet long and off he went. With wheels spinning and dirt flying all over, and the Jeep sliding back and forth, you could no longer see anything. It was like a wild animal tied to a post. After a few minutes of this the Jeep won the battle. It took a long time before all the dust finally settled." 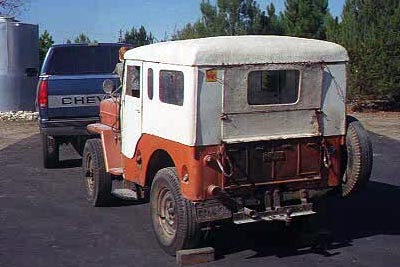 "Grandpa and I were driving to town one time when we came to a long straight stretch in the road. He looked over and asked if I wanted to see how fast we could go. Being a kid the answer was YES. He put it in overdrive and ran that speedo right off the top. To this day I remember that it felt like we were going 200 MPH. I remember talking and laughing about it all the way back to the mine.

"I have been slowly working on the Jeep to get it more mechanically sound again. The body is off and I'm down to fixing the last few leaks/floods. When we cleaned out his shop we also found the original engine." 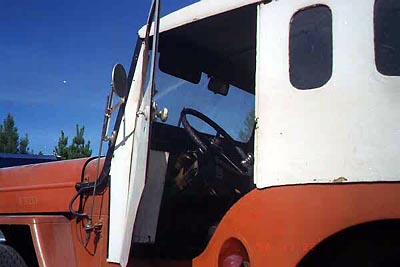 John adds some information about the hardtop: "It's made from fiberglass and he used chicken wire inside the fiberglass. You can see in the interior photo (30K JPEG) that he used the original bows to support the hard top. I remember him making this but don't remember all the details. The doors and rear hatch were made in the late 60's; the doors are made from aircraft aluminum with rivets." 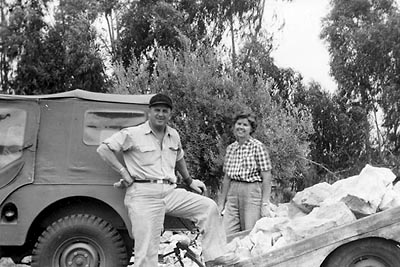 Paul and Eleanor Wallace are seen here with the CJ-3B in Los Angeles in 1955, clearing rocks for the site of the house they completed two years later. Paul is leaning on a homemade cargo box attached to the tailgate, which he built originally for his CJ-2A. See a photo of the box in the late 1940's (40K JPEG) with Paul and some of his students from the Los Angeles Trade-Technical College in the CJ-2A. He apparently later sold the 2A to one of his students.

John comments that "I still have the cargo box. It has a 1500 watt generator mounted in it that was used to run the lights at the mine. He also used the rear gas tank that he made, to fuel the generator."

One more story that John remembers: "We were going down to look at some old mine shafts and we came across a tree in the road. There was no way around, with the road cut into the hill. We tried to roll it and push it but it was too heavy. My grandpa put the Jeep into four-wheel drive; back then you had to take off the free wheeling hubs and put locking hubs on (what a pain -- nice to now only to have to turn a knob.) He turned the Jeep around in the road that wasn't much wider then the Jeep. He hooked a tow chain to the tree and Jeep and we climbed in.

"He put on the power and the wheels started to spin, and then suddenly we were heading up the hill. By the time we stopped we were off the road and on the hill. It felt like we were going to roll over backwards. But that Jeep stayed right there and we were able to back down as easy as we went up. What happened was the tree broke in two, and shot us up the hill. What a ride."

Thanks to John for the photos and stories. The 1955 black & white photo is actually a composite of two pictures, one taken by Paul and one by Eleanor. -- Derek Redmond