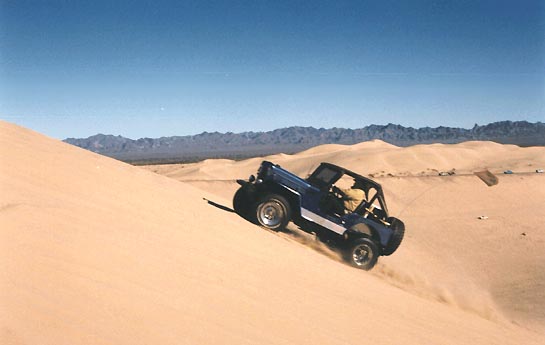 William Mish can put his 1955 CJ-3B head-to-head with just about any hard-core modified Jeep. His Buick V-8 powered build-up has had almost the entire stock drive train replaced, to provide more power for extreme driving. But it continues to be a reminder that the high-hood, flexible-framed Universal Jeep is in many ways a still-unsurpassed design for off-road vehicles. Here's William's description of his Jeep:

"OK -- purists may scowl. My CJ-3B is extremely modified. The engine is a 340 Buick V-8, mated to an SM420 4-speed tranny via an aluminum Buick bellhousing, which houses the McLeod clutch, and the original model 18 transfer case (shift poppet removed for 2Lo capability).

"The front axle is a Scout model 44 with 3/4-ton GM spindles out to facilitate disc brakes, and Warn premium hubs. The rear axle is a full-float Dana 60 shortened on the right side for the offset output of the Spicer 18 t-case. The Jeep also has GM 3/4 ton ARB air lockers. 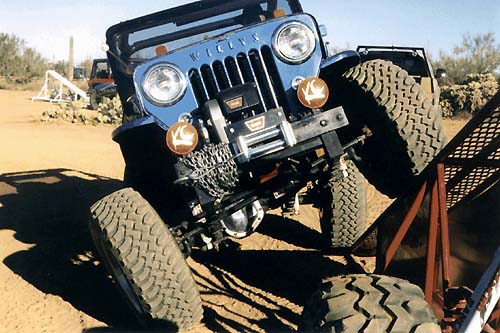 "Suspension mods consist of a front shackle reversal and swing from the center of the frame, and the springs are 2 1/2" Rancho units. Tires are 33 x 12.50 x 16.5 BFG muds mounted on aluminum rims, and I opened up the rear fenderwells to allow better axle articulation.

"This pic is on the ramp at the Arizona State Association of Four Wheel Drive Clubs roundup held in Florence, Arizona every October. My Jeep scored over 1000 on the RTI." 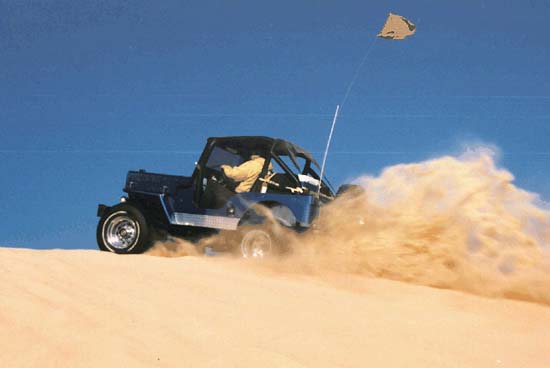 "This photo was taken at the top of Competition Hill in Glamis, California."

"The Jeep took 5 years to build, but it has been a happy experience and is my pride and joy."

Thanks to William for the photos and information on his Jeep. -- Derek Redmond

See also closeup photos and details of the V-8 Jeep.