Here's the great story of a guy tackling his first restoration project, and turning a pile of junk into a very presentable example of a stock Willys CJ-3B. Sounds like there's still a problem or two, so let's hope the readers of the CJ-3B Bulletin Board can help Sam keep his Jeep on the road and the trails for everybody to see. -- Derek Redmond 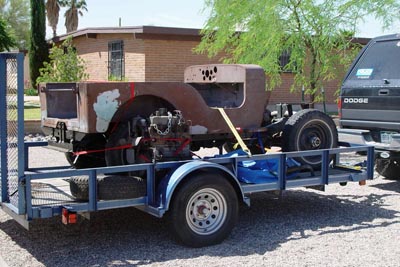 I purchased this 1953 CJ-3B from a fellow in Colorado in April 2002; here's a picture of the Jeep as it was delivered to my home. I unloaded the parts and laid them out in my carport (130K JPEG). Since this was my first restoration and first time seeing the project, I felt a bit overwhelmed and unsure of where to start. 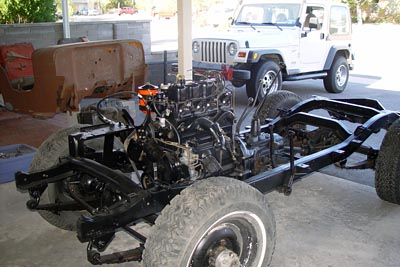 Over the next year I worked on weekends and evenings to do a frame-off restoration. Every time I stumbled, on what or how to do something, I was amazed at how helpful CJ3B.info was, including the Bulletin Board. I first got the frame assembly completed. I had to buy new shocks, tires, tubes, brake parts, exhaust, and various other items. I then installed the drivetrain and got the engine to start. I completed this phase by March 2003. 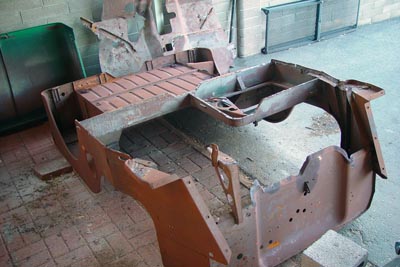 Next was the body work. The body was in terrible shape due to rust and the fact the previous owner has removed the body and sandblasted it, but never repainted at all. There was major floor pan rust and several rust through points on the sides of the Jeep. I removed the floor pan and purchased a replacement over the internet. This was installed at a friend's house (welder) along with replacing the rusted areas on the exterior panels. This rework took some time, but I was fairly happy with the outcome. I then spent some time doing the final feathering and filling to make the panels look fairly smooth. I was not too worried since this is a Jeep! 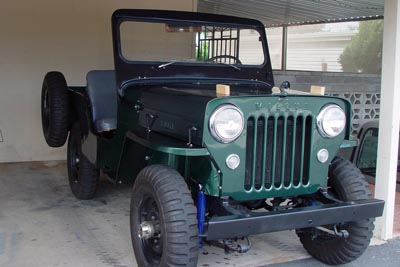 The ultimate plan was to drive the Willys away from the church at my wedding on October 11, 2003. I went to work on the paint job. I set up a friend's garage as a big paint booth and we made our attempt at painting. We had not done this before, but again we took our time and did a decent job. We completed the paint work and reassembly by October 9, 2003. 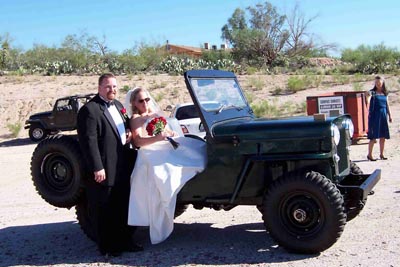 We enjoyed our wedding day and everyone was very suprised by the accomplishment. 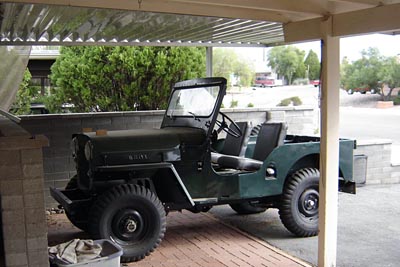 Since that day the Jeep has been taken on a few Sunday drives and spent most of the time in the carport. We have had some major problems with fuel delivery and keeping the vehicle running. I have since replaced the carb, fuel pump, and added a fuel filter. Next I plan to replace the fuel tank, since that is the only remaining original item in the fuel system. Once that is done, I hope it runs like a champ again! -- Sam Nielsen

Thanks to Sam for the story and photos. -- Derek Redmond