Another Trophy for Spud

On Saturday, 22 April 2017, Barry and Karen Ogletree's 1954 CJ-3B named Spud took "Best in Class" at Springfest in Lufkin, Texas, just a month after winning "Best in Show" at Gator Rama in Deridder, Louisiana (with Fred the Stretched 3B taking runner up.) Spud was Barry's first CJ-3B, and in A CJ-3B Named Spud he described the modifications he made to the Jeep. Barry has a lot of fun at car shows, as you will see here. 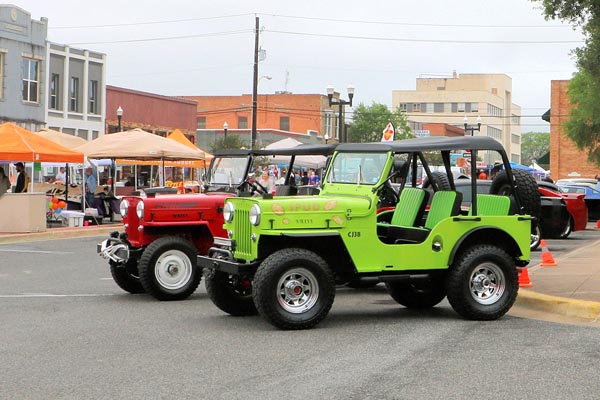 Downtown Lufkin was blocked off for the festival, which has been held for 25 years as the Downtown Hoedown, but got a name change this year to Springfest. There are hundreds of food trucks and vendors, and the car show takes place all around the Court House Square. The Ogletrees like a corner spot so people get a good side view of the Jeeps. 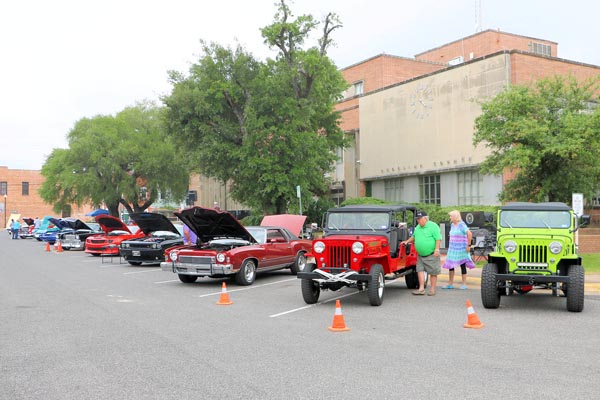 They ended up on the corner right in front of the courthouse. You can see the loudspeakers blasting music in the background, which Barry doesn't like. But he has a long, funny story about the popup tent and chairs he had set up the evening before, to claim some parking spots at the back of the courthouse, away from the music. When he arrived in the morning, with rain threatening, the registration ladies were using his tent and chairs and parking spots, and declined to move! So Barry and Karen made the best of it, and set up in the former registration location at the front. 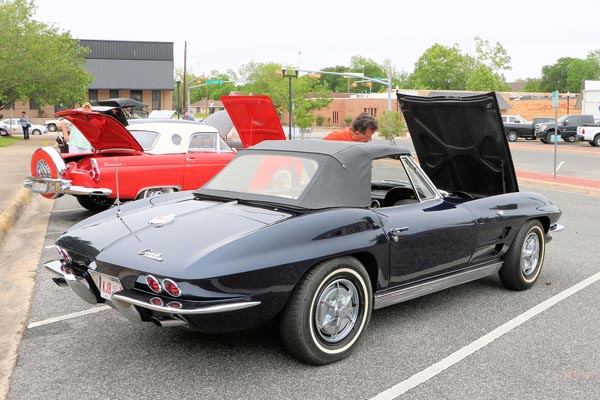 Barry says, "The day started off with a high threat of rain, and it did mist at about 8-9. Then the diehard Lufkin car guys all started coming in and parking. The Lufkin Corvette Club generally do all of the work -- registration, parking, sound, judging and trophy presentation." 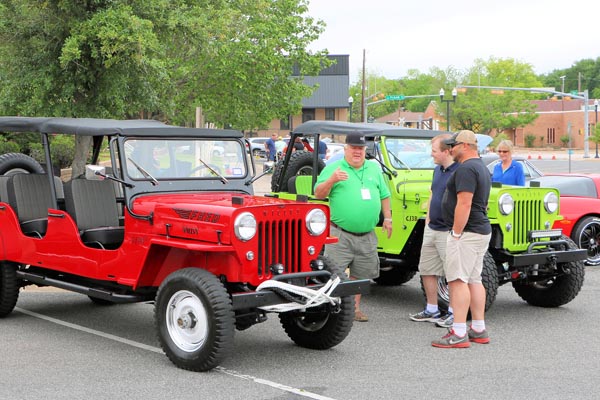 The two high hoods on show together soon attracted plenty of interest, and Barry was kept busy answering questions about both Willys.

He comments, "I have the Jeeps perfectly cleaned and ready to show when we hit the festival gate, but we had to do a complete wipe down after the mist. We had a very good day, as we do not just sit, we work the crowds, and there was a good turnout of people and cars for this event." 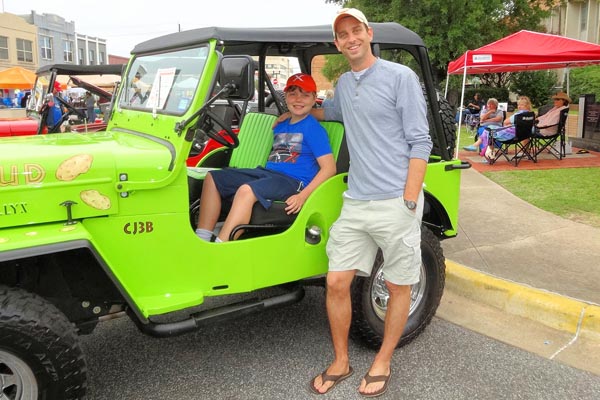 "Everyone here considers it strange, but we will let anyone who wants to, get in, touch, or sit in the Jeeps. Especially the kids, to help them get hooked and interested in Willys. Honestly, I took several hundred cell phone photos during the day, and Karen did also."

Barry took this shot, with Karen finally settled under a popup in the background, with friends John and Laura Shamrock. 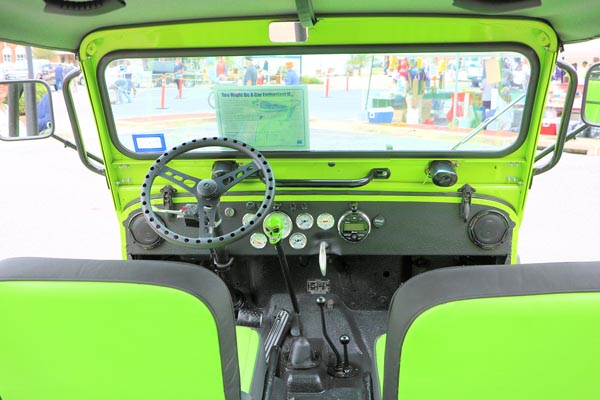 You can see why anybody would want to climb in and check out Spud's impeccable interior.

Barry says, "I have not done any more custom work to Spud since the paint and graphics. But I'm planning to add 3 different gear shift knobs, as people like the shifter knobs on Fred (230K JPEG). Our grandkids like them, that's why they are on my Willys. They get way more attention than I would have ever expected, so, Spud is getting a set of weird creatures in the next few days." 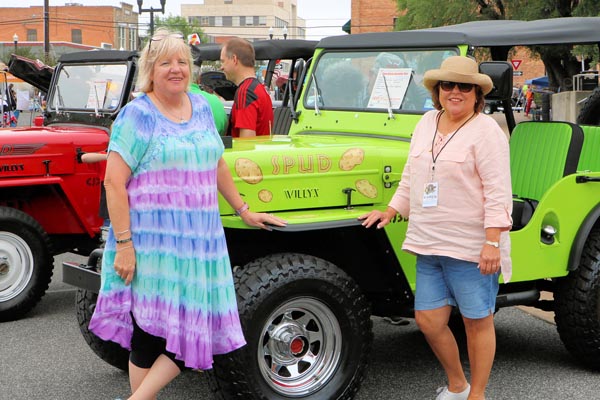 Karen and Laura decided they wanted a photo with Spud to remember the day. Looks like Karen is wearing her name tag from the Willys Reunion -- great recycling idea. 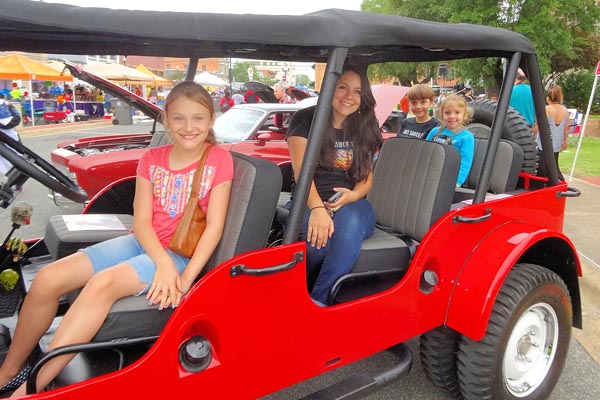 Fred has room for a snapshot of a whole family, and of course his dual rear wheels are another big attraction. 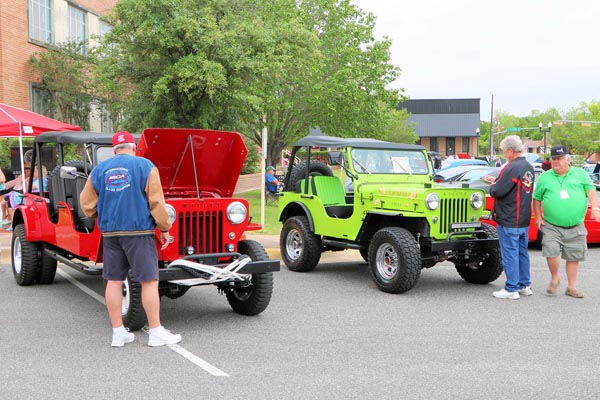 John Shamrock took this photo of Barry keeping an eye on one judge evaluating Spud, while another one has a look under Fred's hood (230K JPEG).

The hood stiffener, and support rod for holding it open, is one of Barry's Hood Fixes. 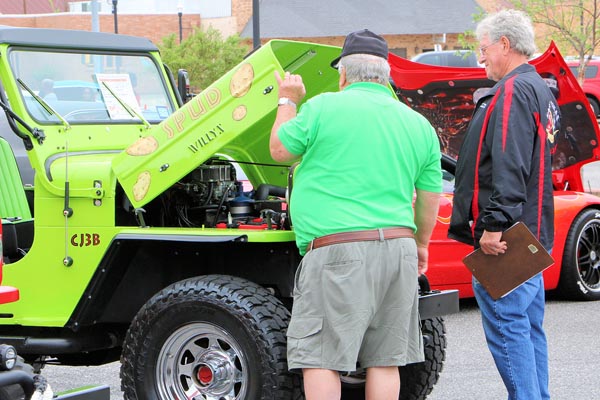 Both of the Willys are running the original F-head engine, and the judges seemed to like the neatly done upgrades to electronic ignition and 2-barrel carbs.

Barry says,"The three judges are very good here. They really take their job seriously. You can always see them coming... clipboards and serious faces. We have to ask the people to move back, as there is always a crowd around the Willys." 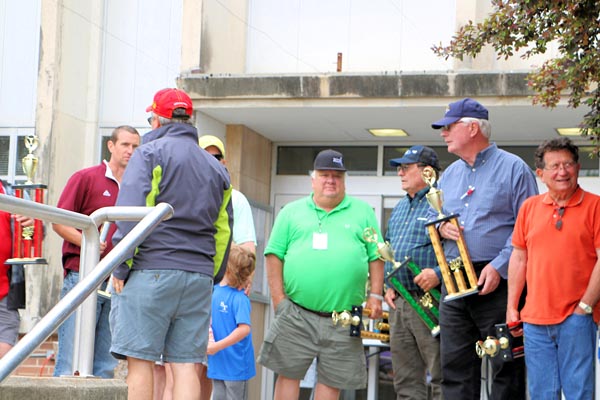 Barry sums the day up: "Fred had, by far, the most action and questions, but when the judging was over, Spud had the win." 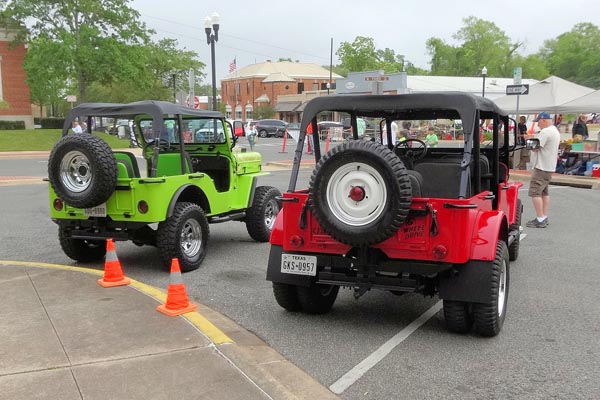 Barry has some more Willys projects in the pipeline, so keep an eye open for those, but there will probably also be lots more chances to see the high hoods on the car show circuit in the summer of 2017.

Thanks to Barry and Karen, and John Shamrock, for taking the photos. -- Derek Redmond