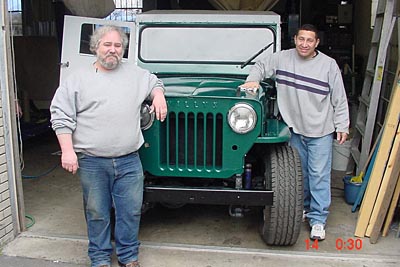 When Frank Porfidio decided to replace the rusty body tub on his 1954 "OB" Jeep (S.N. CJ3BOB5412314) he used the Repli-Tub from Willys-Overland in Toledo, Ohio.

The Repli-Tub is an imported repro tub to which W-O says the following improvements have been made at their shop in Toledo:

Frank sent along some comments on the process of installing his CJ-3B Repli-Tub, saying "I figure after three years of learning stuff from CJ3B.info, it's time for me to contribute something!"

Frank is seen on the left in this photo, pleased with his finished Repli-Tub which is painted in the original Glenwood Green. Below are some more of his photos and comments.

Frank's comments are echoed by past postings made on the CJ-3B Bulletin Board:

Andy Balistreri: "I purchased a Repli-Tub from Willys-Overland. They will sell you a tub but if you want it to fit perfectly they charge you to relocate the holes if they're off. They will also emboss the Willys logo on the hood and tailgate. My tub fit great but it did need some body work since they come very wavy. I filled all the spot weld marks and just went all out. It all depends how much patience you have, and time."

Glenn Smith: "After talking to W-O I had intended to go with the Repli-Tub, but when it came time to order it they were out of bodies and it would have taken a couple of months minimum. The Willys stampings were what I was sold on, and to me were worth the money. Personally I think they charge too much for just drilling the holes in the correct place. They install crush sleeves also, but I'm not sure it's worth the cost. Since the 3B had 2 different dashes the buyer still has to fix that. Anyway, I called Walck's and Omix-Ada had one in stock so I had it in 2 days. Plus Carl had a Willys-stamped tailgate so at least I got that part. I cut out the section of dash with the e-brake, speedo, choke, throttle and steering mount from the old dash, used it as a template to cut out the same section from the new dash, and welded it in place. Of course, if you don't have the old dash to use, that's a bummer. What I'm getting at is the old section has the studs for mounting the speedo, the recess formed for the e-brake, and the proper bend and angle at the bottom for the steering column support bracket. Anyway, with any body kit for the 3B there's still work ahead on the dash..."

Thanks to Frank for the photos. -- Derek Redmond