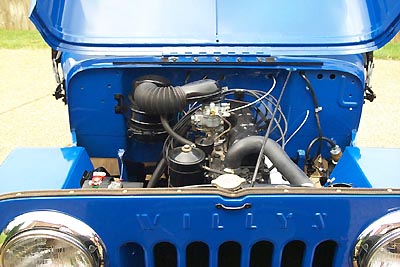 I bought this Jeep in Paducah, Kentucky from a gentleman whose grandfather-in-law (if that is the correct term) bought it new (see the original title, 50K GIF) and used it on a farm in Texas, until it was given to him in the early 1990's. I bought it and brought it back to Murfreesboro, 30 minutes southeast of Nashville. (See a photo of the CJ-3B hitched up to my TJ, 40K JPEG). I basically stripped the whole thing down and sandblasted and/or scraped everything. 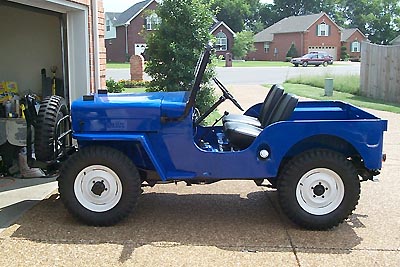 As for the color... that is Middle Tennessee State University Blue Raider blue. It was a custom color mixed here locally to match M.T.S.U.'s colors. My wife and I graduated from there and my wife still teaches there. I painted the wheels, frame, engine, and tranny myself. I had a friend, Robert Brooks paint the body. I had him paint the windshield frame the original black. 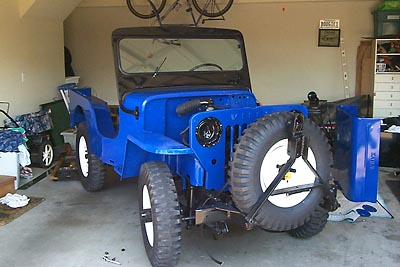 Everything is original except the tub and seats. I stopped working on the Jeep for about a year while I saved up some dough, and I bought my tub from Dan at Rigid Steel Fabrication.

I finally began reassembling it on July 4th, 2002. The Jeep is as stock as I could make it, except for the tow bar and tire holder on the front, but I really liked how that all works and looks. I got the tires from Coker Tire in Chattanooga, TN. 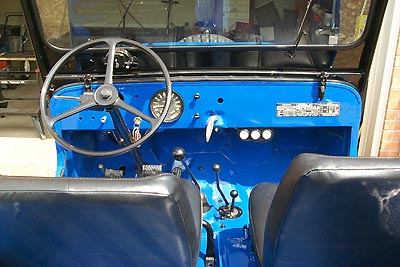 I tried to save everything original I could. I cut the original dash, bow holders, and passenger seat mounts from the original tub. A friend and I welded the components on to the new tub, making it more original. I got the idea from CJ3B.info and it does make all the difference in the appearance.

I installed a 3-gauge cluster -- oil, amp, temp -- that is mounted at the bottom of the dash. The cluster is hinged so it can be hidden under the dash. The wiring is a set that I got from Walck's. It was perfect; every wire was the same length and color, with all the connections you need. 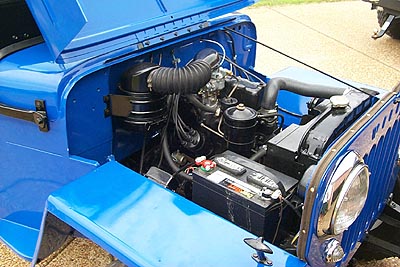 The engine was basically in sound shape; I just replaced plugs, wires, cap and rotor. I put in a new clutch, fork and throwout bearing in the tranny while I had it all apart for cleaning. I also had to rebuild all of the brake components. 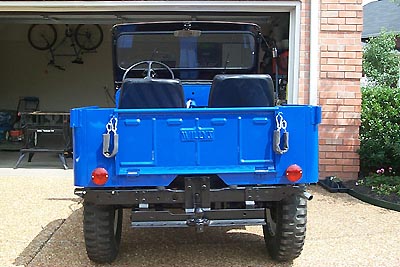 We'll be using the Willys for tailgate parties before the Blue Raider football games. All I have left to do is set the timing to get rid of some backfiring issues and I am done.......Whewwww.

The info I got from CJ3B.info has saved me from making some serious and costly mistakes. This is the best page for the 3B on the planet!

Thanks to Rankine for the story and photos. -- Derek Redmond