Plenty of people like to enter their restored Willys Jeeps in parades (see Everybody Loves a Parade on CJ3B.info), so why not build a Jeep actually designed for parades?

Andy Tally is a Vietnam veteran in Hi-Nella NJ, who had the idea of cloning the famous parade Jeep used by South Vietnamese President Nguyễn Văn Thiệu. 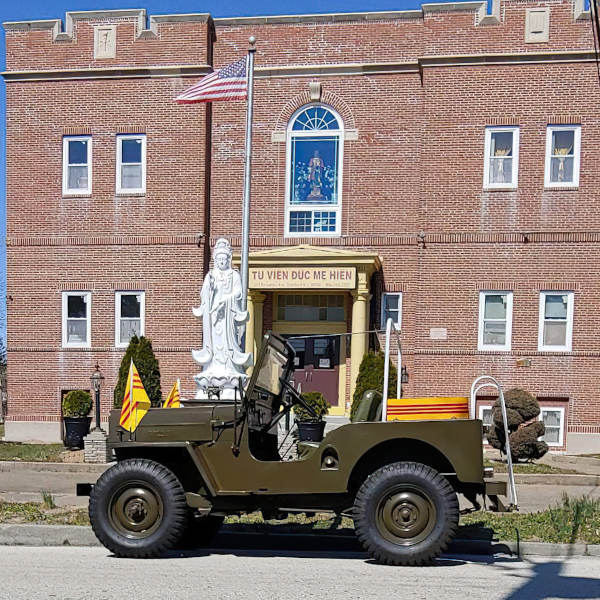 The CJ-3B is decorated with South Vietnamese flags, and has a rear step with handrails for easy entry by VIPs.

When Andy had the Jeep out for the first day of spring 2021, he stopped for a photo in front of a background suggesting Vietnam, the Tu Viện Đức Mẹ Hiền Buddhist temple in Stratford NJ.

In addition to the flags, details indicating a Jeep of the Army of the Republic of Vietnam (ARVN) include the Quan Canh ("Military Police") marking on the windshield, and the yellow bumper flashes with unit numbers.

Andy didn't rub shoulders with President Thieu during his tour in 1968. He says, "I was in the 1st battalion 22nd infantry regiment of the 4th infantry division. I was an infantryman and we spent all our time out along the border with Cambodia and Laos. I never got near any large cities to see any parades. I was never in Saigon until 2018 when I went back.

"I got the idea for this from a picture on CJ3B.info, in the CJ-3B Jeeps in Vietnam section." 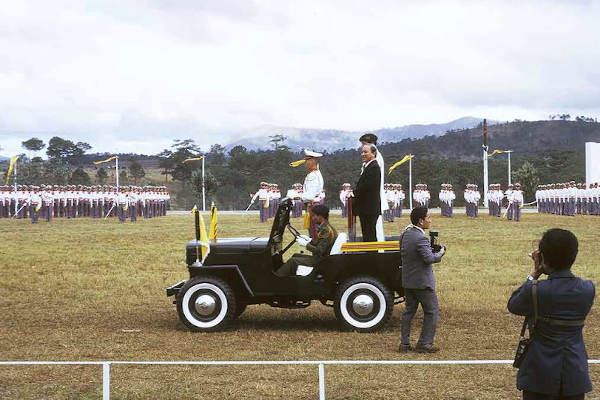 The picture Andy spotted shows Thieu inspecting officer cadets at the Dalat National Military Academy in December 1974. During his military career, Thieu had been commandant of the Academy, but as President he exchanged his uniform for a civilian suit. 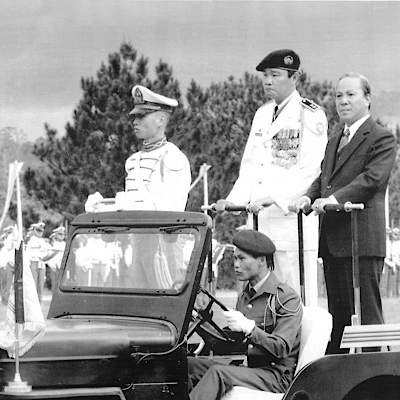 One of the photographers snapped this AP Wirephoto of Thieu (right) during the same event at Dalat in 1974, with the Academy's current commandant (center). At this point, Thieu had been President since 1967, but it would be only four months before he left the country, as North Vietnamese forces closed in on Saigon.

The flag on the fender here is the flag of the President of the Republic of Vietnam as Supreme Commander of the Armed Forces (170K PNG) as seen at the top of this page. The warlike eagle carries the motto "national honor and responsibility." 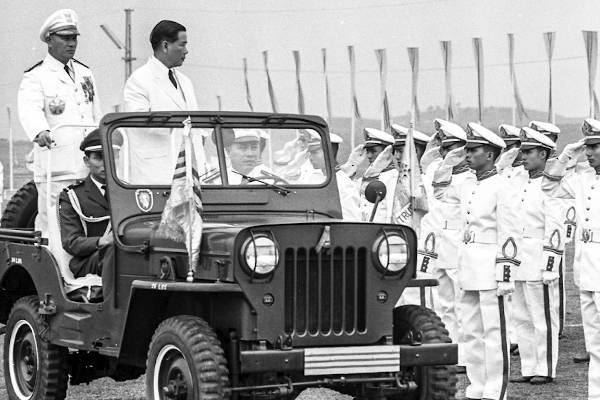 Fourteen years earlier, at Dalat in March, 1963, President Ngô Đình Diệm, (right) had been doing the inspection of the cadets. His Mitsubishi CJ3B-J4 was flying the old (1955-63) President's standard (120K PNG), depicting a bamboo grove with the inscription "duty and sacrifice."

Seven months later, Diem was captured and executed during a military coup. Thieu was promoted to General for his role in the coup, and a new Presidential flag was adopted, with the eagle and swords. 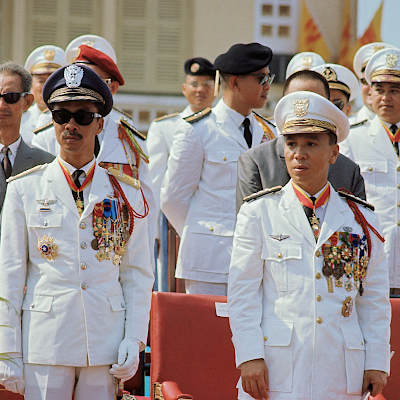 By 1966 General Thieu (right) was Chief of State of the military junta, with his rival Air Marshal Nguyễn Cao Kỳ (left) as Prime Minister. In 1967 elections, Thieu became President, and sidelined Ky supporters from key military and cabinet posts. Ending years of instability, Thieu managed to hold on to power until the end of the war. He then escaped to the UK, and later to Massachusetts, where he died in 2001. (Wikipedia) 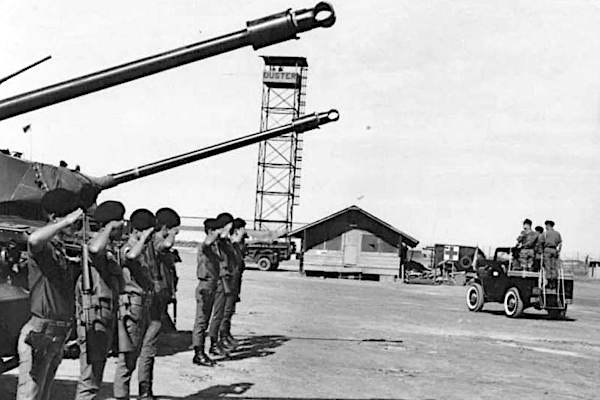 The President was not the only VIP to rate a parade Jeep, and they weren't only seen in big cities. In this photo, a three-star ARVN General visits a base at Duyet Binh sometime in the 1960s to review Vietnamese special forces (see CJ-3B on Parade on CJ3B.info.) 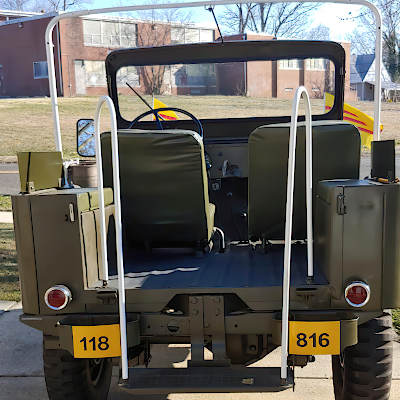 Andy removed the tailgate from his Jeep and replaced it with a detailed reproduction of the rear step and handrails seen in the photos.

And he's serious about keeping this configuration. He says, "Since I didn't use the tailgate it ended up being a bench (120K JPEG) in front of the house." 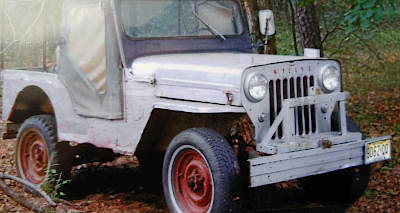 "This is what it looked like when I got it. I bought the Jeep off Craigslist in 2012. It came from a farm in central New Jersey. It was bought new in 1960 by a farmer, from a dealer in Trenton NJ. Sometime later he sold it to his neighbor who also had a farm. I'm the third owner." 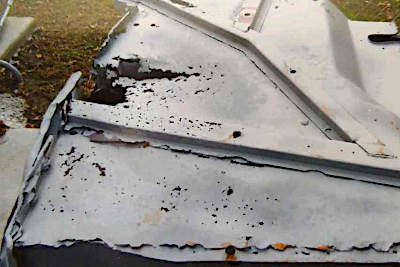 "It ran when I got it but it had no brakes. I don't think it was driven much on the road -- it only had 8,900 miles. But the body was really beat from farm use." 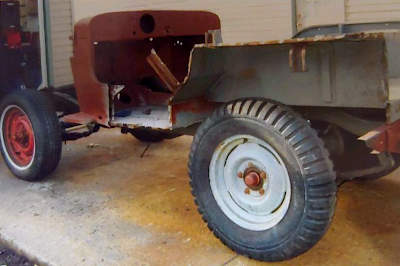 "I ended up replacing the sheet metal on both sides, and some rusted floor pans." 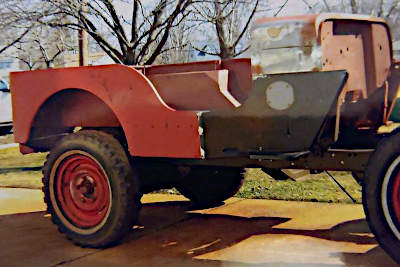 "I bought the side panels from D & L Bensinger in Pennsylvania. All the other panels I made from flat stock. 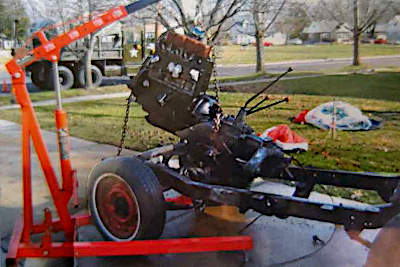 "I also pulled the drivetrain and replaced seals and gaskets while I was at it. Also all new brakes, master and wheel cylinders along with all new lines. It took me about six or seven months to finish." 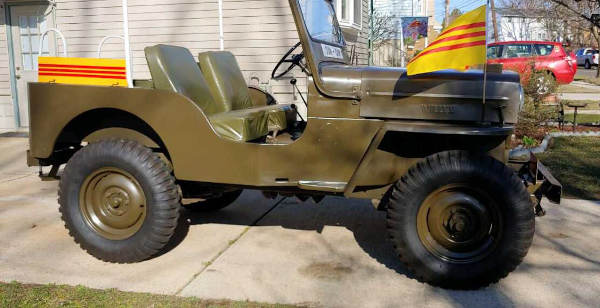 Thanks to Andy Tally for the photos. In case you hadn't guessed, he says he likes oddball Jeeps. One of his others is an M38A1D with Davy Crockett M28 tactical nuclear weapon system (320K JPEG) which has scored 99.3 at two MVPA conventions.