Michael Velez in Fort Smith, Arkansas, told me in early 2019, "I purchased this Jeep as an unfinished project and set out to make it a good performing Willys. It works and performs great, and gets used -- it's seen a fair bit of action. I didn't do everything exactly the way I wanted so it may be going under the knife again soon!" 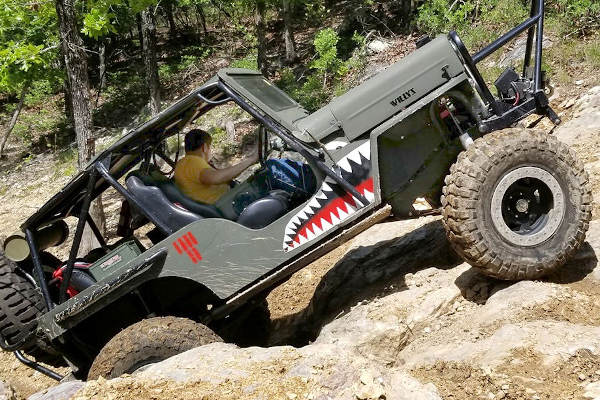 The long-wheelbase rock crawler started as a '54 CJ-3B, but is now sitting on a modified DJ-5 frame. The body is stretched twelve inches over the rear fender wells.

Providing the power is a Chevy 229 3.8L V6 with a Brennan Metcalf Motorcraft 2100 carburetor. It's mated to an SM420 transmission and Dana 20 transfer case with a Teralow 3:15 to 1 gear set and dual shifters. 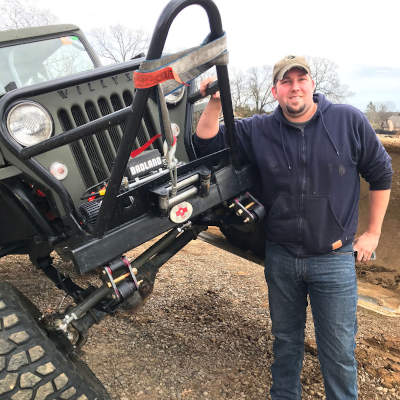 Michael says, "I use the Jeep for stress relief! It's just for rock crawling and spends most of its life in the garage or on the trailer going to play! But when it does come out it definitely gets lots of strange looks. Especially people saying 'You're not going up that trail with that, are you?'"

The front axle is a narrowed Dana 44 with 4:88 gears, Yukon Grizzly locker and chromoly axle shafts. Heavy duty steering components are from Ruffstuff Specialties. See the Jeep with a level stance in a front view (350K JPEG) 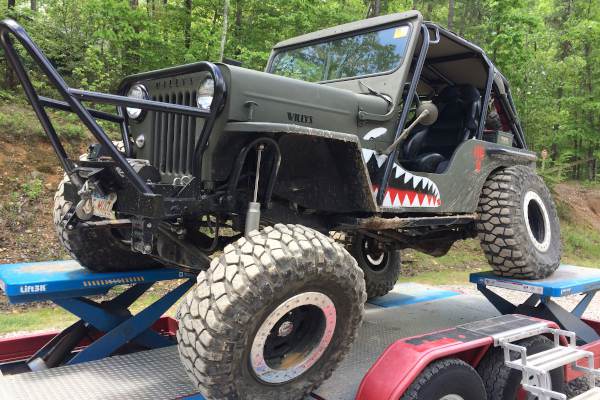 He told me in early 2020, "I just redid some stuff over the winter, all new BDS springs all the way around -- 2.5-inch YJ springs up front and 3-inch XJ springs in the rear. Just have to finish adding my hydro assist and it will be ready for another wheeling season." 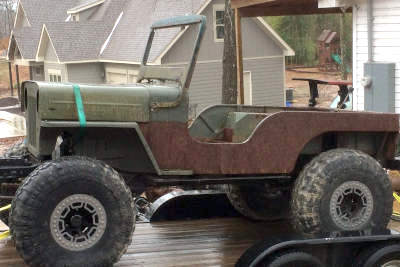 Thinking back to when he bought the Jeep five years ago, Michael said, "I was actually not looking for a CJ-3B. I just knew I wanted to build a Willys Jeep. I had an M38 and was going to build it, when I found out this one was going up for sale. I sold the M38 and went after this one since he had already stretched it and installed the motor, transmission and transfer case.

"I already had my narrowed axles for the other Jeep so I ended up taking a 2-hour trip, racing a sleet storm back home. I had to half-ass throw my axles under it to move it. It was definitely a memorable trip!" 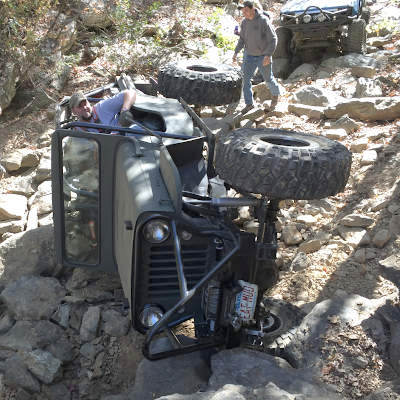 This sideways shot was taken at Poteau Mountain in Oklahoma. Michael comments, "That was actually its 3rd or 4th time out after it had been built, and I was still getting used to some things. We were down in a creek crawl and I was running with a bunch of big buggies on 40s and bigger.

"We came up to this ledge and to get up it you needed to have your driver side climb first. Figured I would give it a try and see how it does, and just as I pulled up my friend yelled at me, "We are going to test your flex!" and well, it didn't flex enough! Before I knew what happened it just gently laid over on its side! No damage other then a little dent on the side rail. Hooked some winches to it and got it flipped back over and I took the easier side!"

Michael has the original invoice, sales contract and some other paperwork from 1954. He says, "Scott King, who owned it before me and and purchased it from the original owners, just happened to mention not too long ago that he had some paperwork for the Jeep. So I asked if he could send it to me, and this is what I got! Needless to say I was like a kid on Christmas morning when I saw this!" 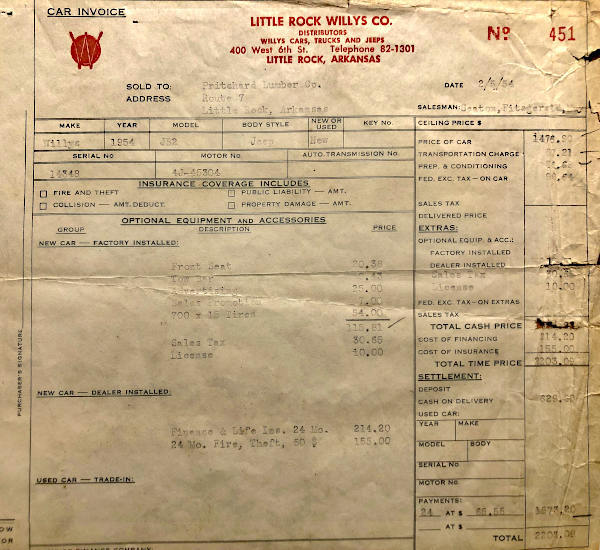 The invoice shows the Jeep was sold by Litle Rock Willys in February 1954, to Pritchard Lumber Co. in Little Rock. The cash price, hidden by a tear in the paper, was $1,833.89. The total price including financing and insurance charges was shown as $2,203.09. (You can compare this with other original sale prices in CJ-3B Pricing and Factory Options on CJ3B.info.)

Optional equipment (see the larger copy of the invoice) included a passenger seat, tow bar and 700x15 tires, and for some reason there are charges for "advertising" and "sales promotion."

Interestingly, the invoice (above) describes the Jeep as a 1954 Willys, model "JB2". I couldn't place that model number, so I looked it up, and discovered that the Republic-Ford JB-2 ("Jet Bomb 2") was the 1944 American copy of the Nazi German V-1 flying bomb. Also known as the "Loon," it was intended for use in a planned U.S. invasion of Japan, but was never actually fired in combat (Wikipedia.)

More than a thousand of the bombs were assembled by Republic Aviation, and Ford built the jet engines. But the really interesting detail is that Republic sub-contracted the airframe manufacturing for the JB-2 to Willys-Overland!   It was one of many other war-effort items in addition to jeeps, built at the Willys factory in Toledo. The location of what Willys called the "Robomb" assembly line (180K JPEG) can be seen in a World War II plan of the plant, in The Parkway Plant From the Air on CJ3B.info.

So Willys did make a JB-2, but I don't think that's what Pritchard Lumber was buying here!   If the "JB2" written here is not just a mistake, I don't know what it means. 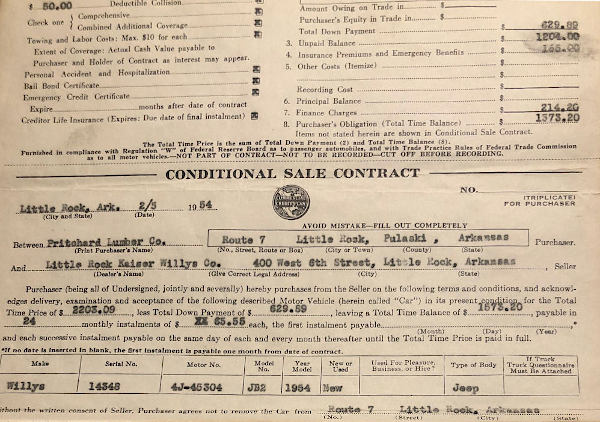 The model number JB2 also appears on the sales contract, but again I don't know why.

The dealer's name is entered on the contract as Little Rock Kaiser Willys Co., so it was probably a Willys dealership which began selling Kaiser automobiles after Kaiser purchased Willys-Overland in 1953.


Thanks to Michael for the documents, photos and information on his project! -- Derek Redmond

For other highly modified builds on CJ3B.info, see: