Most of the high hood Jeeps sold as army surplus in Spain are CJ-3 or CJ-3M models built by VIASA or EBRO (see Military Jeeps in Spain). However, the information sent in Spanish by owner Marcel Vila, identifies this Jeep as a 1955 Willys CJ-3B. It was possibly delivered new as military aid to Spain from the U.S.

Read on for Marcel's story of what has turned into a pretty slick restoration, with some fancy trimmings and one significant mechanical upgrade. 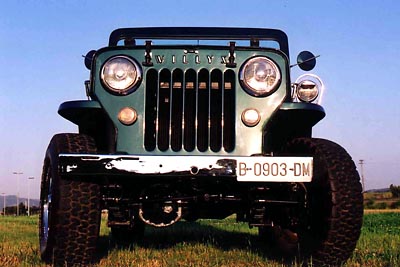 Marcel says: "Unfortunately of the history of my CJ-3B I have very little information. As far as the year of manufacture, I am not sure if it was made in Spain or the U.S.A. -- the number on the frame is 57348 12770. The spare wheel was originally located on the right near the back. On the side of the hood and in the front the letters WILLYS are printed, and nowhere appears the Spanish mark VIASA. As far as the volts I do not know if it was originally 6V or 12V -- when I acquired it, it was 12V." 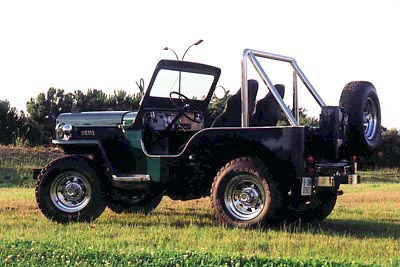 "Its last military service was in Valladolid, where a friend of mine on the way to Madrid stopped to see an auction, and bought it. The Jeep and the motor were delivered in a truck. My friend registered it as a civilian vehicle, and later he replaced the Hurricane motor by a Perkins diesel with a piston displacement of 2,710 cc and maximum power of 71 cv. According to him the original motor consumed too much fuel." 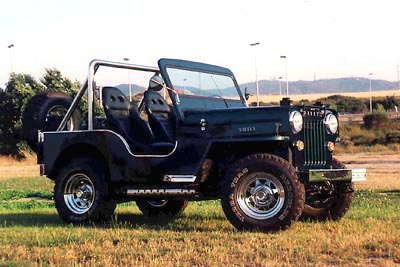 "Years later I acquired the Jeep from him, and verified that with the diesel engine and the original gearbox of three speeds, the maximum speed had remarkably diminished (60-70 Km/h or 37-44 mph). I decided to replace the gearbox with one of four speeds, from a Jeep Toledo SV (100K JPEG) -- a van made in Spain by Willys-VIASA. I kept the transfer case and the Perkins diesel. With this operation we could reach 110 Km/h (68 mph)." 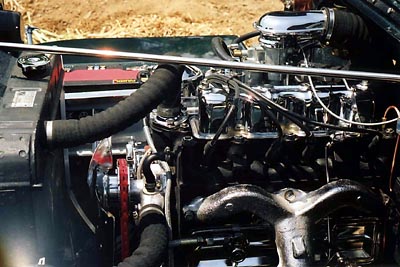 "After a few years I decided to reinstall the original Hurricane motor, which entailed other modifications to the transmission, motor mounts and location of the radiator. The motor is moved several centimeters towards the front. While doing this, with the aid of a mechanic friend, I disassembled the Jeep piece by piece and restored it totally. Later a professional painter gave it the finish that can be seen in the photos. At the moment with its original motor and the box of four speeds, it reaches a speed of 140 Km/h (87 mph) approximately."

Thanks to Marcel for the story and photos. This is a new one to refer to in those discussions on the CJ-3B Bulletin Board about how fast a CJ-3B can/should be driven. -- Derek Redmond