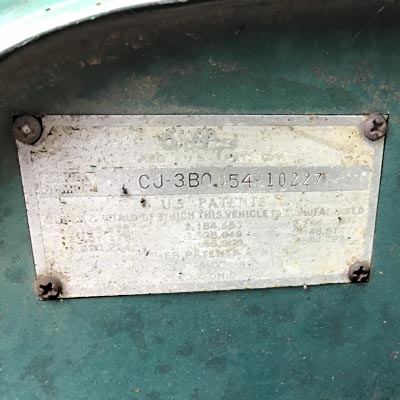 The letters "OB" can stand for Operating Base, Odd Ball, Out of Bounds, Off Broadway, Overactive Bladder and many other things. Some of those other possibilities were raised in the discussion about 1954 CJ-3B "OB" Serial Numbers on CJ3B.info, but no documentation of why those letters were stamped into the serial numbers of the first 2,600 CJ-3B's built in the 1954 model year has been found.

We know of nearly 40 surviving examples out of those 2,600 Jeeps, and looking closely at them has revealed very little that might distinguish them from other 3Bs. But when another OB Jeep shows up, there's always the hope that it might reveal something new. And here's a well preserved early example in North Carolina that is worth taking a close look at. 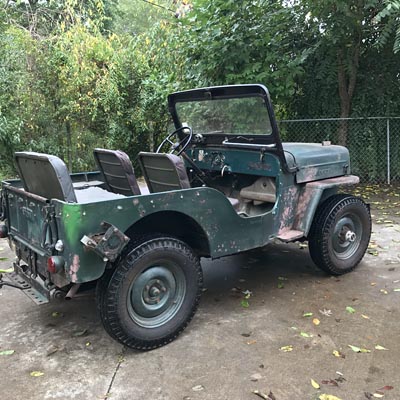 Paul Wells' new Jeep was 227th off the line in the 1954 model year, meaning it was built in August 1953. Paul says, "I live in Hays NC, in the foothills of the Blue Ridge Mountains. I bought this 1954 CJ-3B, serial number CJ-3BOB54-10227 in May 2017. It is in very good original condition other than a very old exterior paint job that is peeling off and that is a little darker that the original green. It has a little rust in the floors and of course behind the spare tire carrier."

It also came with original front and rear seats, and a Harrison heater (100K JPEG) with most of the original paint and "Willys" label intact.

Note: as of spring 2018, the Jeep has been sold to Jeff Thomas in Iowa. 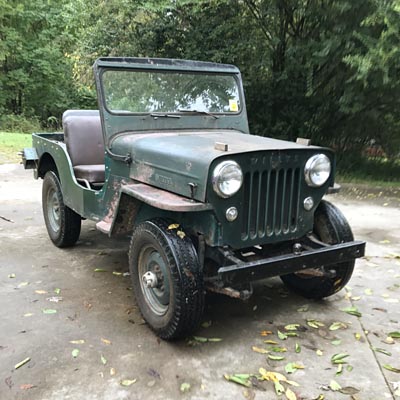 "This Jeep was in the care of an older gentleman for many years before it was given to his friend in about 2004. I bought it from the friend's widow -- it had been stored for about 8 years. The lady told me the Jeep originally was bought for the use of a lumber yard foreman at Broyhill Furniture Company in Lenoir NC." 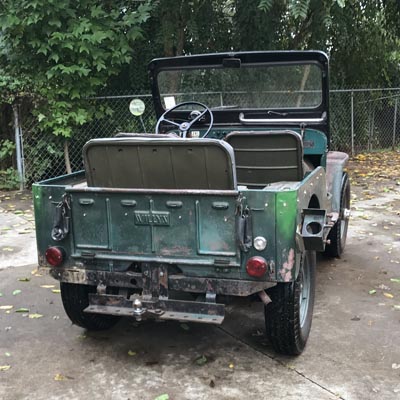 A grab bar has been bolted through the windshield frame on the passenger side, and a set of front parking lights added as back-up lights, possibly by the original Willys dealer.

The tailgate (240K JPEG) has the slight anomaly described in the "Mysteries" section of Tailgate Reading on CJ3B.info: a couple of small cutouts for spare tire mounting bolts are missing. 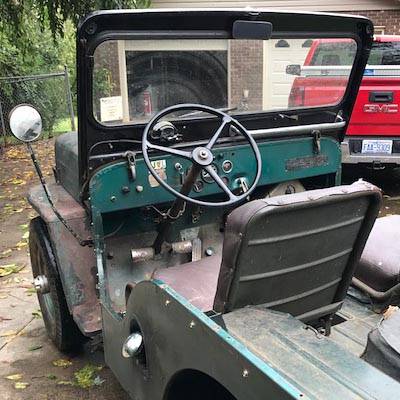 One reason the bodywork and seats are in relatively good condition, is likely the Koenig hardtop (390K JPEG) that was on the Jeep. Paul also speculates that the reason for the long arm on the rear view mirror was the limited view through the hardtop windows. The Jeep clearly has also had a softtop installed at some point. 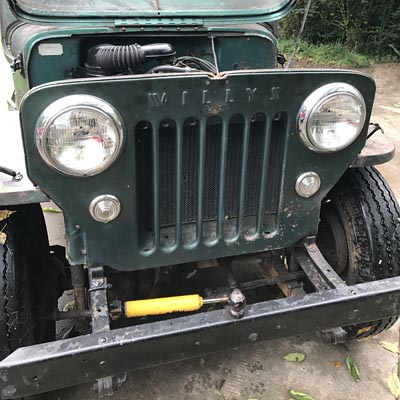 A trailer hitch on the front bumper probably dates from the days when the 3B was working at the lumber yard. It also sports a steering stabilizer, and a couple of holes above the grille where something was previosuly mounted. 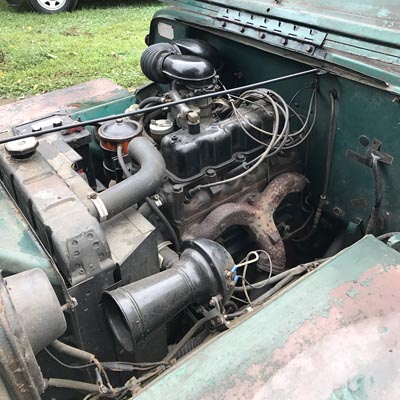 The original horn has been replaced with something similar to the Sparton horn used on Willys MBs. The engine is a factory replacement block with engine number 4FR174105. 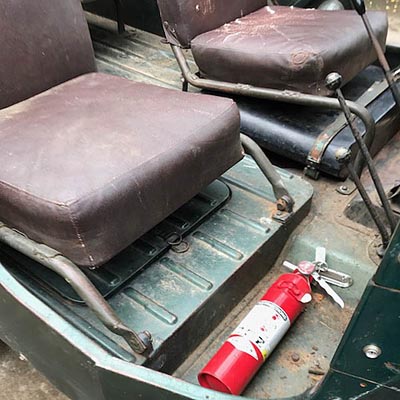 The seats are in pretty good shape, particularly the passenger seat (180K JPEG). The upholstery appears to be original, although the reddish brown material on the front seats is unusual. Paul says, "The screws (170K JPEG), fabric, frames, and springs all look original to me."

A torn seam on the driver's seat back (80K JPEG) reveals the padding underneath. 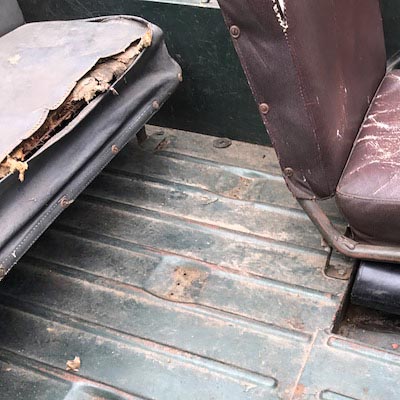 The front seam of the bench seat in the back is split, but it's a good example of the original CJ-3A/3B Rear Seat, as described in Rear Seats: CJ-2A through CJ-5 on CJ3B.info. The front legs hook into metal straps built into the floor, and the back legs fit into spring clips under the floor. See a rear view (150K JPEG). 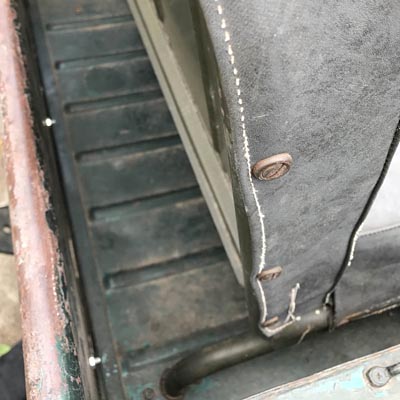 The rear seat has the more typical grey vinyl, and the details look original. See also the front edge and the top edge (100K JPEGs) of the rear seat.

So overall this is a very clean, stock early CJ-3B, with a few extra holes drilled here and there.It could make a stunning restoration, and it confirms what we already know about the OB54 series, but doesn't seem to reveal anything new.

Thanks to Paul Wells for the photos. As of spring 2018, the Jeep has been sold to Jeff Thomas in Iowa. -- Derek Redmond

Note: the "OB54" icon at the top of this page now appears wherever there are photos of OB54 Jeeps on CJ3B.info, and links to the 1954 CJ-3B "OB" Serial Numbers page.

Last updated 26 May 2018 by Derek Redmond redmond@cj3b.info
https://cj3b.info/Owners/Wells.html
All content not credited and previously copyright, is copyright Derek Redmond