The images below are scans of paint chip sheets for Willys vehicles from 1959 to 1965. They are an approximation of the colors used by Willys, and should not be considered a replacement for actual paint chips. Note that it is not always clear which of the colors were used by Willys on the CJ-3B model in particular years. Elsewhere on the web, see chips for most years at AutoColorLibrary.com.

Steering column, brake and clutch pedals, and engine were normally black. Fan shrouds, seat frames and undercarriage were black or apparently sometimes olive drab. The side steps are normally the same as the body and underbody. One gallon of paint is usually enough for painting the body inside and out.

See also How to Match a Paint Color. 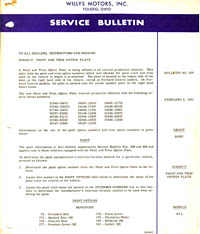 Willys Service Bulletin 505, dated 9 February 1961, announced that a "Paint and Trim Option Plate" would be attached to all current production vehicles, starting with serial number 57348-74870 in the case of the CJ-3B. Thanks to Bill Norris for scanning this.