Jon Paulsen tries out his new tires and body lift. 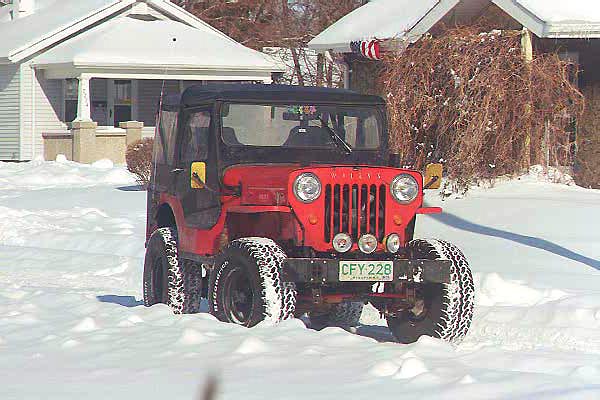 Lafayette, Indiana is "usually in a no-snow belt, because it's 50 miles north of the typical winter jet stream which gets lots of winter precipitation, and 50 miles south of the end of the lake-effect snow," says West Lafayette resident Jon Paulsen. "But I think we got more snow in the two significant storms this year than in the past ten years combined."

Luckily, Paulsen is the owner of one of the many CJ-3B high-hood Jeeps in the state of Indiana. Paulsen's 1958 Jeep has a Buick V-6 engine cooled by an electric BAF (Big Assed Fan, visible in the photo above). The BAF draws 30 amps on high, 15 amps on low, and keeps the heater from getting too comfy cosy in the winter. (It also solves cooling problems with the stock Willys radiator in the summer.) 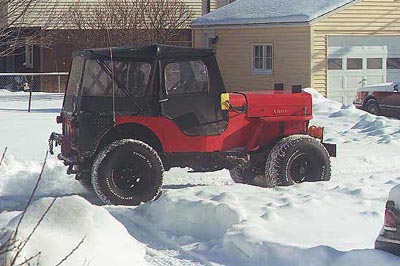 Prominent in this photo are Jon's 33 X 12.5 BFG AT's on 8-inch standard offset rims. He says, "They are a perfect fit and don't rub with steering limits set to near factory spec for a dana 25. You'd be in trouble with a dana 27, unless you adjusted out about 4 degrees or went with a 10-inch rim or a funny-offset 8-incher."

"I installed 2-inch plastic body mount bushings (20K JPEG). I figured 2 inches might be a bit too much, but there were no major hitches. I guess that's about 1 to 1 1/2 inch over the stock size -- my old bushings were about 1/2 inch (what was left of the ones still there). It sure does ride better -- I had a few places where the body was hitting the frame." 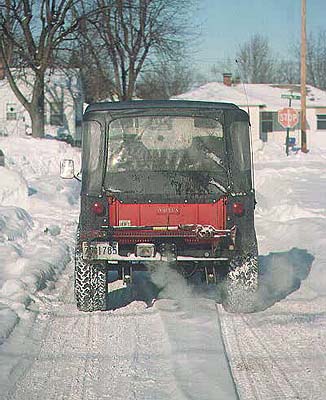 "Just after getting the body lift installed, and one day of test time, we got hit with a good foot of snow. I took the Jeep out for a spin just for fun. It walked right through the 2-foot drift in my driveway. There was such a surplus of traction with the 33" BFG's, that I had to slip the clutch a little to keep it running while it bogged down in the deep stuff.

"Incredibly, while walking through my tracks, I was sinking ankle deep, so I guess the Jeep was floating on the stuff. I'm not too surprised, since I figure there are more PSI's of pressure on the ball of my foot while walking, than under my under-inflated tires."

Jon says that's a little fact he likes to toss at the tree-huggers at work, when they tell him how horrible his Jeep is on the environment.

At least Jon gets to work. When the weather is like this, the CJ-3B is his daily driver.