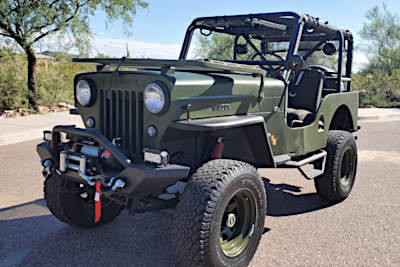 Jeanne in Gold Canyon, Arizona, sent these photos in 2021 of serial number 57348 37245. She says, "It was rescued out of a family member's farm field where it sat for over ten years, unused and forgotten (70K JPEG). It's been in the family since 1968; my family member is the second owner, me being the third." 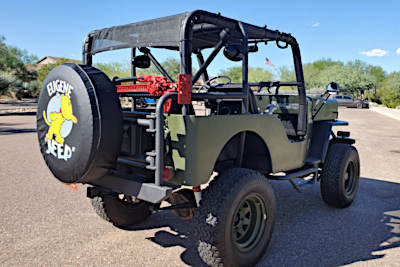 The upgrades include an impressive roll cage integrated with the rear tire carrier, rear bumper and side steps. Also Willys branded seats (120K JPEG) custom made by Arizona Correctional Industries. Jeanne has named her 3B after Popeye's Eugene the Jeep. 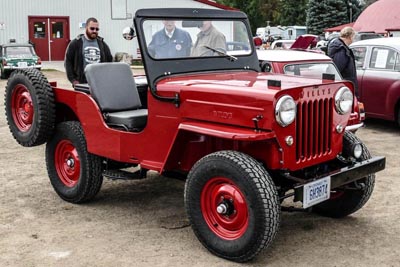 "The old Willys was in tough shape. There were no fenders or hood, no grille or radiator, and there was just enough of the body tub to take some measurements from. The steering column and box were present as were the original, oil-caked transmission/transfer case, but the engine was long gone."

That's how Gary McCourt in Brantford, Ontario described the beginning of his nine-year restoration project in October 2009. And this photo shows the end of the project, in December 2018. 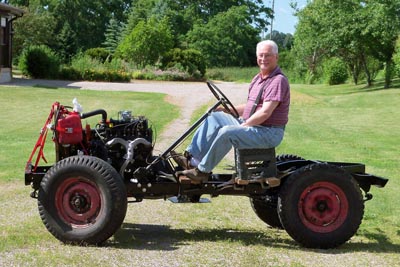 "This photo was taken on July 4th, 2014 -- the day I drove the chassis up and down my driveway for the first time... and a few dozen times after that!" 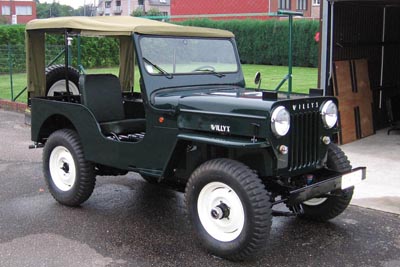 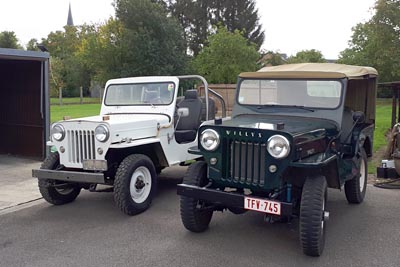 In 2017 Leo had unprecedented news: "I have bought last month on an auction a CJ-3B. At first sight nothing special, but it has serial number 40764 and I had already the one with number 40765."

Two CJ-3Bs with consecutive serial numbers together! And there's no doubt about it; in addition to the serial number plates (250K JPEG) from the importer in Belgium, both Jeeps have the numbers stamped on their frames. 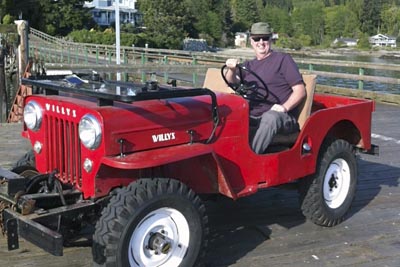 John in British Columbia contacted us to say, "I bought the 1957 CJ-3B from Ben Hildred and plan to continue his restoration after the summer. As you can understand I need to have a little fun driving it through the mountains on the Sunshine Coast this summer."

Previous owner Ben Hildred provided this background: "I live on Saltspring Island in British Columbia, Canada, and I inherited the 1957 CJ-3B from my Dad who purchased it around 1970 from the U.S. Border Patrol. I have restored it (130K JPEG) over the last couple of years keeping everything as original as possible." Ben sold the Jeep in 2013. He said, "It was hard to see the old Jeep go, but I have a lifetime of great memories." 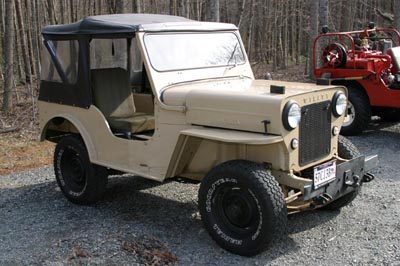 Ed in Charlottesville, Virginia says this Jeep is "supposed to have originally belonged to the Civil Air Patrol. It was painted red as can be seen in the enginecompartment (80K JPEG). It has well-made running boards (40K JPEG) added, and a skid plate on the front protecting the steering and differential. The running boards may have been so that people could easily ride or climb on the Jeep. It has 22,000 original miles."

See the rest of Ed's Jeep collection in Your Dream Garage. 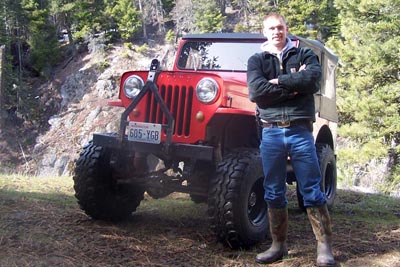 "I live in Orting, Washington, and this is my 1957 CJ-3B. Although the body and running gear are original, the look of this CJ-3B is not. It is lifted with its original springs sprung over the axles. It has 33" Super Swamper tires, but i bought a set of road tires for daily driver use. Dana 44 rear, 25 front, 5:38 gears, open front and rear, Buick 231 V6, T-90 with Spicer 18 and a Warn overdrive, Full roll cage, bucket seats with 5 point harnesses. This Jeep can crawl through the woods, and go 60 on the freeway. This is my second Jeep but now I am hooked on the high hoods. I hope to get one for my girlfriend soon!" 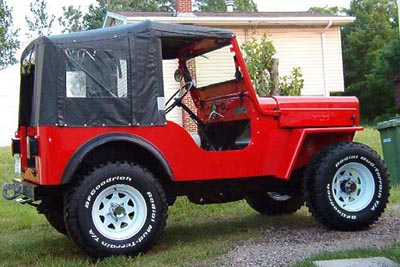 Peter in Nova Scotia says, "My CJ came with a Koenig hardtop on it (90K JPEG) -- I believe this is the reason there is a body to even restore, as it kept the water and snow out and tied the body together. Anyway, I will not be putting it back on as I have no plans of ever letting the truck sit out in bad weather and I have bought a Tigertop soft top.

"It has been quite a while in the building, but with the help of some of my talented friends and my background as a auto tech, its almost finished, just waiting for the tailgate paint to dry then that's it! I took some liberties with the body and design -- it's not 'to spec' as some would have done, but more of a hand-fabricated all-steel (80K JPEG) smooth version. No seams to collect dust and rust, anyway."

More photos of the project: not savin' much..., then starting the tub rebuild, getting the chassis ready, and a bottom view of the steel (80K JPEGs). 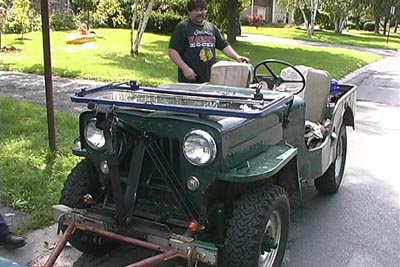 Bill Glasford has been doing a frame-off restoration of a 1963 CJ-3B (50K JPEG) in his garage, and also has this 1957 former snowplow Jeep.

See a photo with the hard top on (50K JPEG). The body is pretty rough, but a touch of class is added by the rear-mounted spare tire with the Willys hubcap (see a rear view photo, 50K JPEG). The oil filter from the F-head engine (70K JPEG) was removed to allow the installation of a Hy-Lo Jeep hydraulic pump (40K JPEG) for the snowplow.

The front bumper is reinforced with these corner braces (60K JPEG) which may be dealer-installed or aftermarket items. 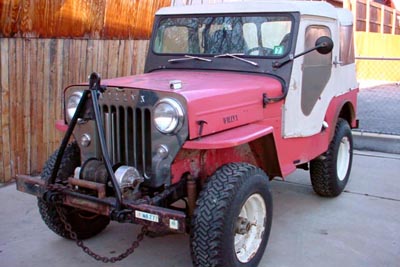 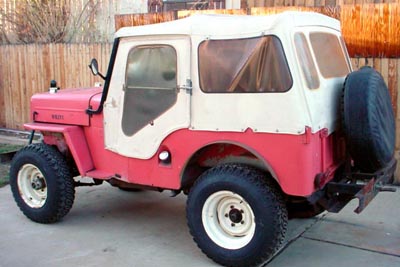 "The Jeep has very little rust (usual spots, spare tire mounting area and behind the tail lights). The engine has manifolds, so the fenders are uncut. Aside from a few drilled holes, the firewall (60K JPEG) was cut for Ford heaters and the dash (60K JPEG) was cut for a radio. The top is a Jeep Whitco and looks restorable. Has a Warn overdrive, Koenig PTO winch (60K JPEG), Hudson steering and 11" brakes. The like-new Norseman Armstrongs are still soft and have held air for over a week!

"I have a complete, rebuildable Buick 225 (fan to the bellhousing). I intend to clean the Jeep up and keep it pretty much the way it is now." 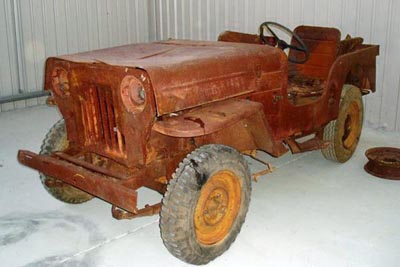 Paul Rundel in Western Australia is planning to clean off the surface rust and use much of the body of this '57 to help restore his 1958 ex-Air Force CJ-3B whose body is in fact "almost non-existent due to rust."

Paul says, "Unfortunately all data plates are missing, but engine number (4J146879) and dash layout (50K JPEG) pinpoints the LHD vehicle to '56-'57 vintage. (As far as I'm aware, all later CJ-3Bs were factory converted to RHD by Willys Australia.)"

He'll also likely be using parts from another body (50K JPEG) which "appears to be of '53-'54 vintage from the multiple instrument dash."

By the way, if you haven't seen it, check out the sad remains of a RHD '58 3B found by Paul on an old sheep station a few years ago, in I've Seen Better Days... on CJ3B.info. 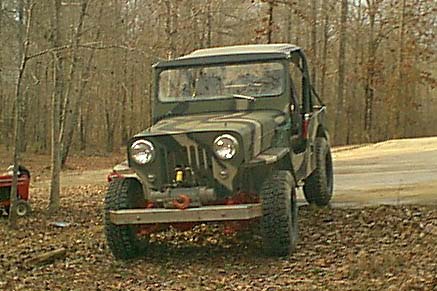 "A good friend of mine had a CJ-7, and I had a Chevy Z71. We went riding one afternoon and the Jeep just went places my Chevy couldn't. Thus a desire for a Jeep starts. I tell my friend I want a Jeep "cheap" -- he wheels and deals a lot. A few weeks later he calls. "I bought you a Jeep." $500. He says it's an older model but it runs and drives."

See more photos of the Camo Jeep, with details of the build-up James is doing on it. 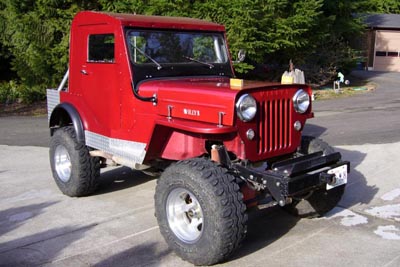 "Between me and my dad we have had four 3B's, and are always looking for a good deal!" 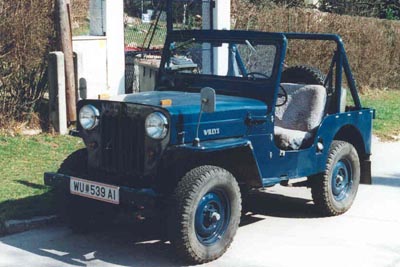 Gerald lives in Austria and is the fourth owner of this 3B imported from Switzerland.

"I have had my CJ-3B for 6 years, and I have had no problems with it. In Austria a CJ-3B is a rare car, and people are very interested when they see us driving our Willys." 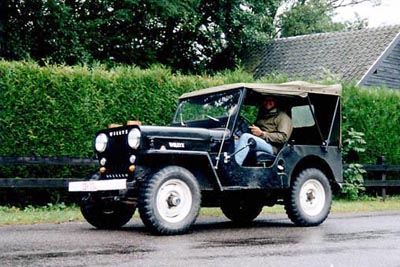 "The vehicle seems to have been imported and registered as new in Belgium in 1957. I bought it 10 years ago, to drive a lot and not to work on. At that time I hardly knew the difference between the battery and the waterpump if you know what I mean. But the previous owner must have been a beast to the vehicle because it turned out to need a rebuild of the engine, brakes, radiator.... So about a year later I decided to rent a workshop, buy a couple of good books about car mechanics and bodywork, and strip the Jeep completely down. The chassis and body were in pretty good shape but mismanaged (there was a 15 mm layer of filler on the hood) so I did the bodywork and painted the whole thing. I gave it a new electric system, exhaust, brakes, etc.

"I was very lucky to find a guy who can supply every Willys part. Some parts are copied especially on his request and drawings, and he sells to the whole of Europe. He makes my CJ-3B cheaper in maintenance than my regular car. He's a wholesaler but because I'm a 10-year client he's still helping me with even the smallest orders. The address is: G. Desmet, Antwerpsesteenweg 455, 9040 GENT (BELGIUM), 00329228 33 66.

"A few years ago I did a holiday trip to Lyon where I had a breakdown because of a broken fuel pump rocker that had damaged the shaft. After getting home on a truck I fitted a brand new Hurricane and rebuilt the gears and transfer case. For the moment, my baby is running great but I have started thinking of doing the bodywork and painting again.

"See also a photo from the right side (60K JPEG) with the top down; Willy was there doing a great job as all-round vehicle at a Scouts camp in the middle of a hot July. Not bad for a 45-year old vehicle...."