Half a Dozen High Hoods 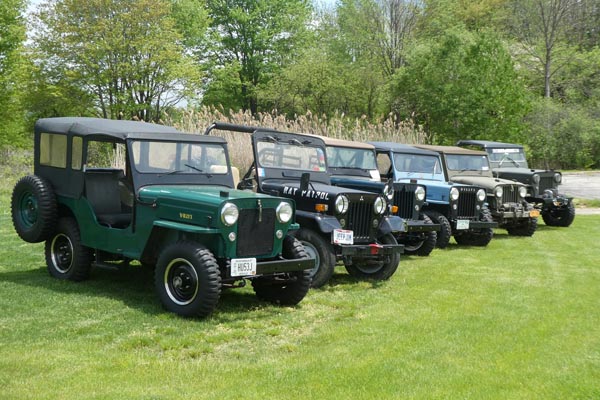 The 2018 Spring Willys Reunion was held on 18-19 May 2018 in Aurora, Ohio. There was an impressive showing of CJ-3Bs, matching last year's record of six high hood Jeeps. I have some great photos and video of the Jeeps posing together (see Part 3) and I'm looking forward to seeing even more CJ-3Bs next year. 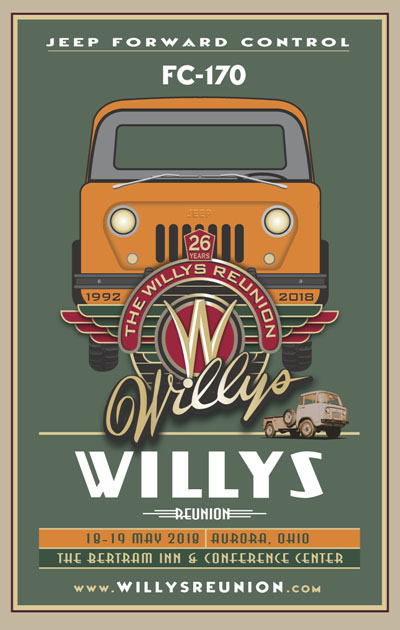 Overall, the turnout for the Reunion was excellent, with maybe 70 Jeeps turning up despite the threatening weather forecast which kept away some last-minute entries. In the end both Friday and Saturday were beautiful, and the rain did not show up until banquet time on Saturday.

Despite the FC-170 being announced as the featured vehicle of this year's Reunion, the Forward Control Jeeps did not turn out in numbers for the event. But late in the day on Friday, one FC-170 did show up, and created some excitement (see Part 2.)

What follows is my diary and my camera roll for the weekend, to give you an idea of the event if you haven't been to a Reunion, or to serve as a reference if you were there. Note that my emphasis is on the CJ-3Bs in attendance! 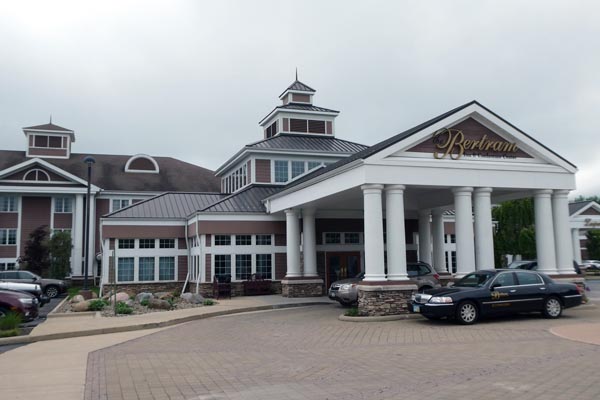 The Bertram Inn in Aurora was a great venue for the event. They may not have known what they were getting into, with over a hundred Willys fans descending on the hotel, but they handled the event well. Most people had rooms in the north wing of the Inn, with windows looking out onto the parking lot filled with Jeeps, and the woods beyond. 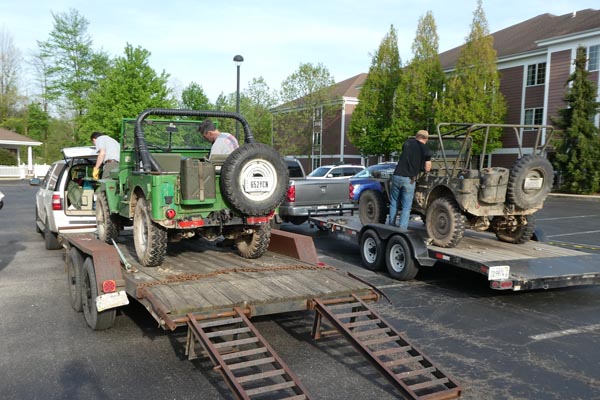 Here you get a good look at Jpet's custom roll cage which doubles as the frame for his canvas top (400K JPEG). 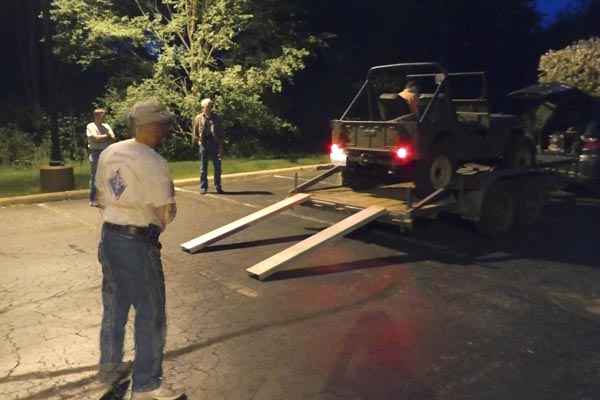 Since the Spring Reunion changed from a 3-day Friday-Saturday-Sunday schedule to a shorter Friday-Saturday schedule a few years ago, more people have elected to arrive on the Thursday, and trailers were still rolling in after dark. 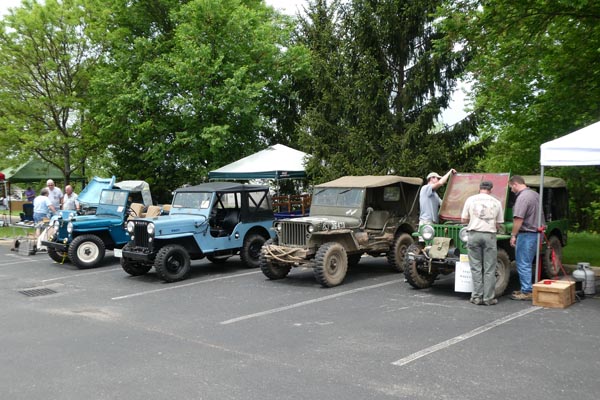 When I got up Friday morning, the mud-splattered 2A and MB had been joined by a trio of bright blue Jeeps, and I immediately recognized William Barrow's CJ-3B out of Pensacola, Florida. 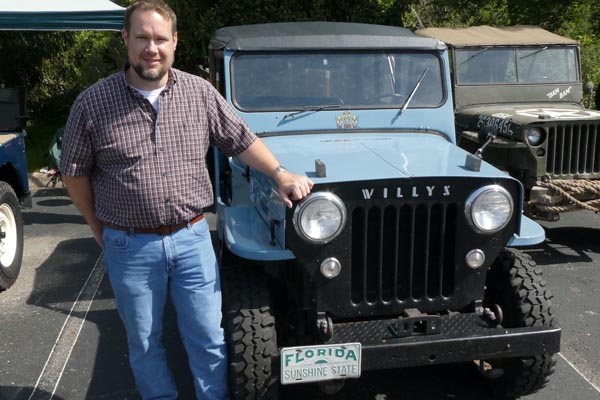 William looked fresh and eager to start talking Jeeps, after a solid two days of driving his 1954 CJ3B-OB up from Florida (for the second year in a row.)

The whole story of William's "3BOB" and his trip to the Reunion is coming soon on CJ3B.info. 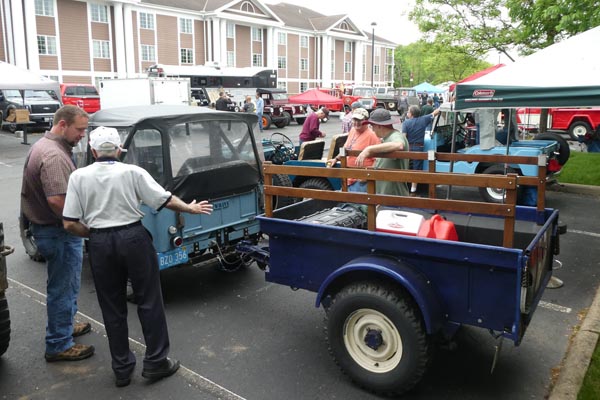 Again this year, William brought his Bantam trailer filled with tools, spare parts and camping gear. The trailer was purchased from Jamie Powers in Texas, who had restored it after buying it from Larry Steed. 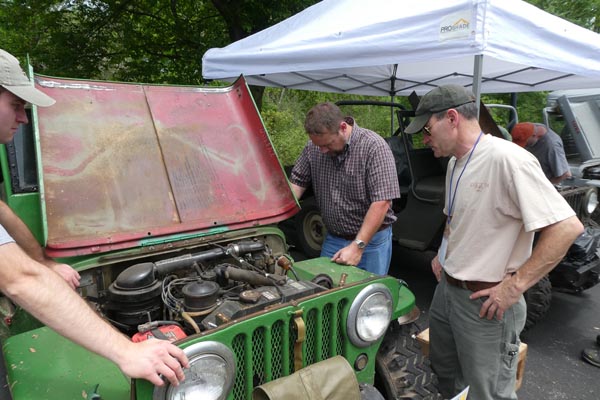 William has been thinking of disc brakes as a worthwhile upgrade for his highway driving, so he took a close look at the spacer plates Bob Stevenot made for the GeoTracker disc conversion on his 2A (220K JPEG). William tried one of his 15-inch wheels (270K JPEG) on the 2A, and found that it wouldn't fit over the brakes. But he has also been thinking of putting 16-inch wheels back on his 3B, so a plan is starting to come together. 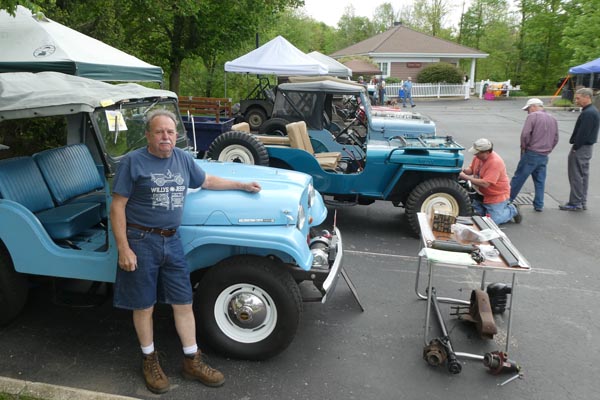 I had a lot to talk to Bob about, since I heard that he has a very low-mileage President Red CJ-3B in his garage. I'm hoping that we'll see it soon on CJ3B.info, and next year at the Reunion! 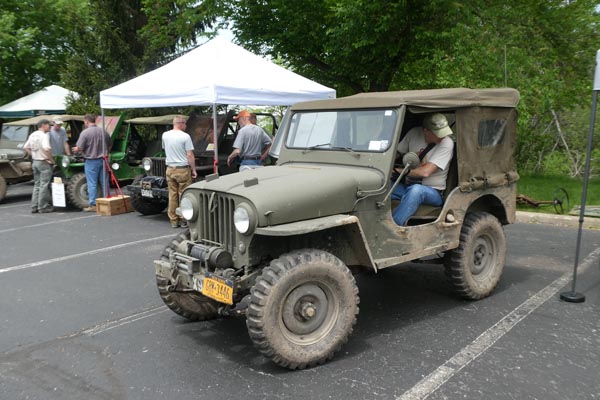 Bob Westerman's X98 clone was also muddy from the previous day's offroading. And since the weather forecast called for rain, he decided to put the doors on (320K JPEG).

Bob's Jeep is a 1953 CJ-3B with bodywork modified to match the Willys X98 prototype from 1950. See the whole story of the Legendary X98 Brought to Life on CJ3B.info. 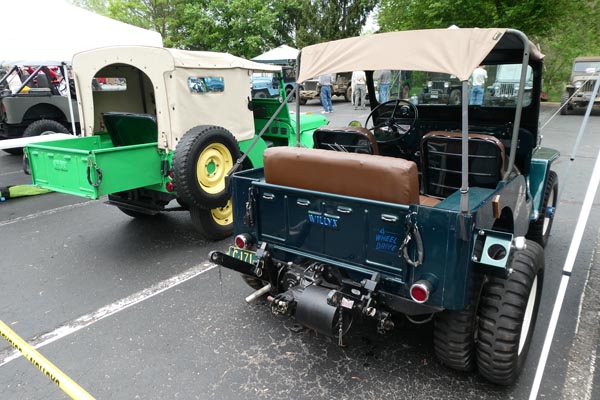 Bob Christy's working Jeep, now sporting dual rear wheels, was there of course, but Bob was off somewhere dealing with all the details of organizing the Reunion.

The green 1946 CJ-2A with the body extension in the background, is also from Ohio and has been in Kathy Heil's family since it was new. 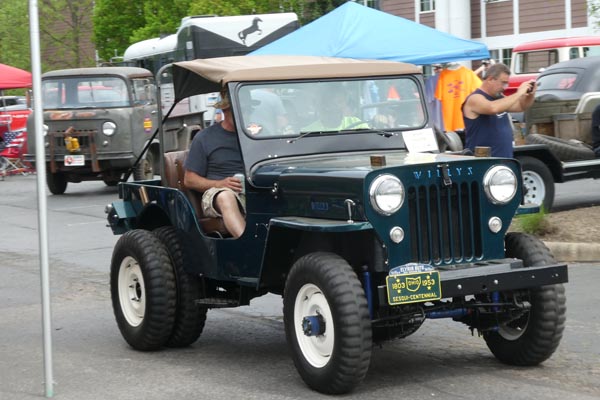 A few minuted later I spotted Bob, in the Jeep with Scott Gilbert, probably on an urgent errand to Wal-Mart to pick up something Mindy needed in the office. 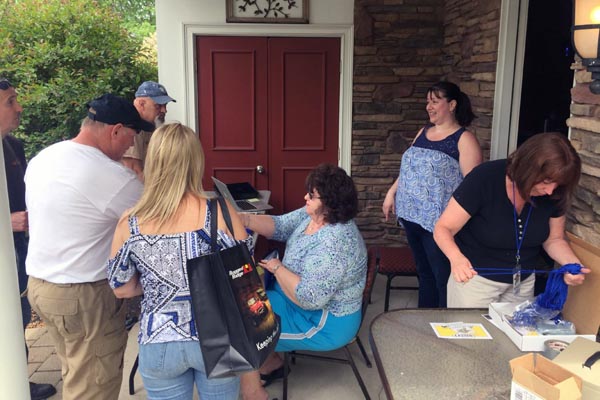 Meanwhile Mindy was busy making name tags, while Sue and Monica handled the registration table. Thanks to Jpet for this photo. 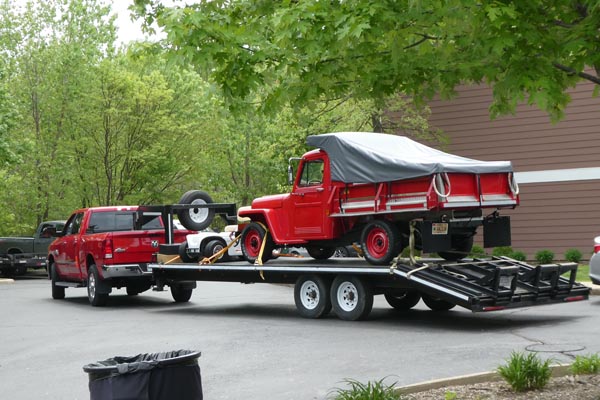 Lots of people were still pulling in to the hotel. Heads turned when Mel and Donna Hochstetler's 1950 dump truck arrived from Indiana. 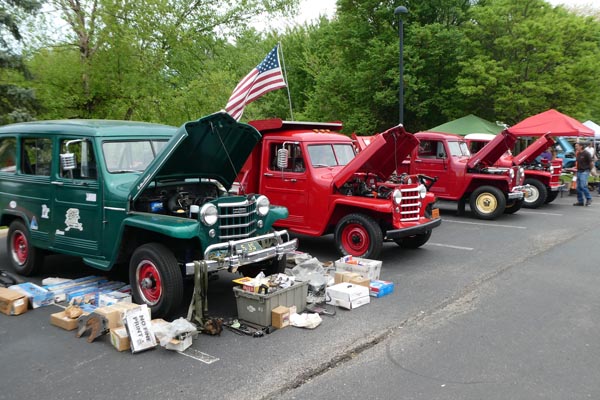 The dump truck found a good spot in the red Jeeps section.

Scott Gilbert's wagon, famous after its brief involvement in the "Alaska or Rust" trip, was probably allowed in this section because of the red wheels... 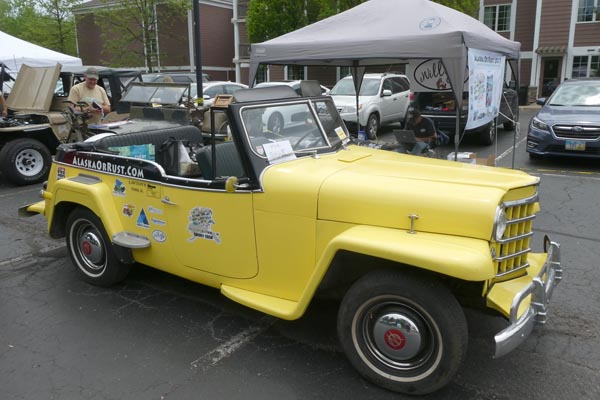 Another "Alaska or Rust" veteran was Russ Lawton's 1951 Jeepster "Charlene", parked with a For Sale sign, in front of the eWillys tent. 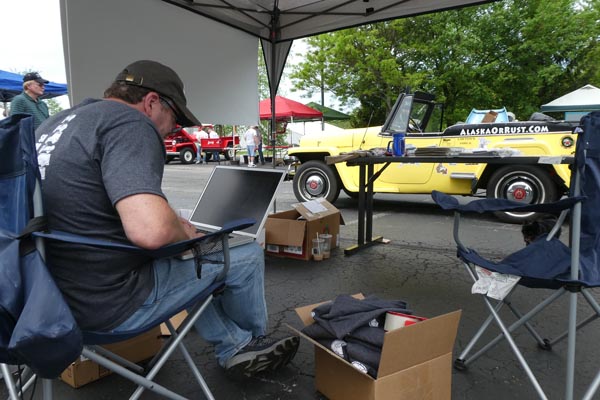 Inside the tent, Dave Eilers was hard at work, on either eWillys.com or his keynote speech scheduled for Saturday night. 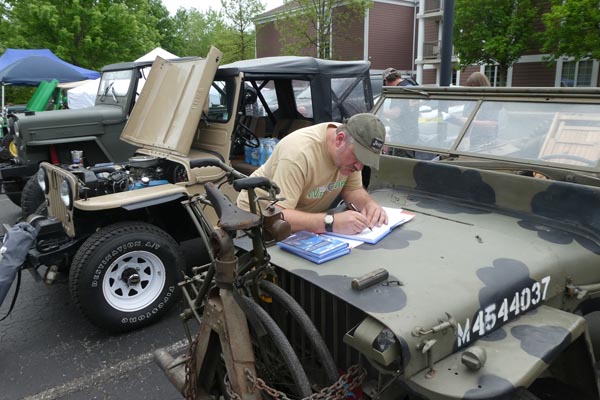 Merlin Hanson was also busy, autographing copies of his Alaska or Rust! book, on the hood of his slat-grille MB, Mortimer. A wonderful touch is the WWII folding airborne bicycle. 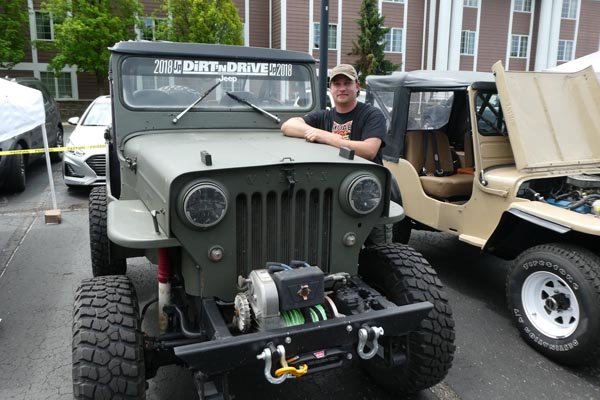 Next along the line, I got a chance to meet Joe Beadenkopf in person, and his wide-track CJ-3B on its 33-inch tires, well known to CJ3B.info readers from his North to Alaska story. 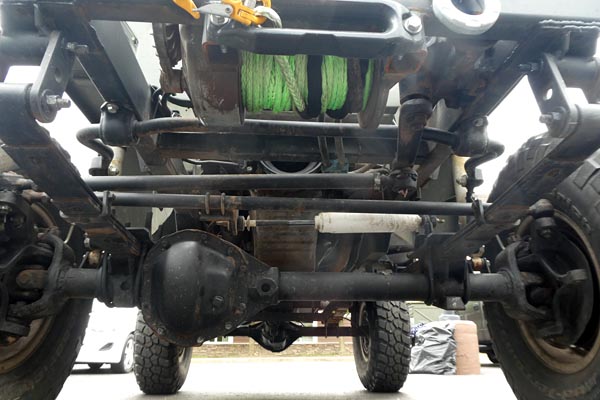 Joe built a custom frame, and the drivetrain includes a five-speed transmission, Dana 44s and 4:10 gearing, behind a Chevy 4.3 V6 (270K JPEG). He built the sway bar because he does a lot of highway driving (including a full day to get here from Maryland.) 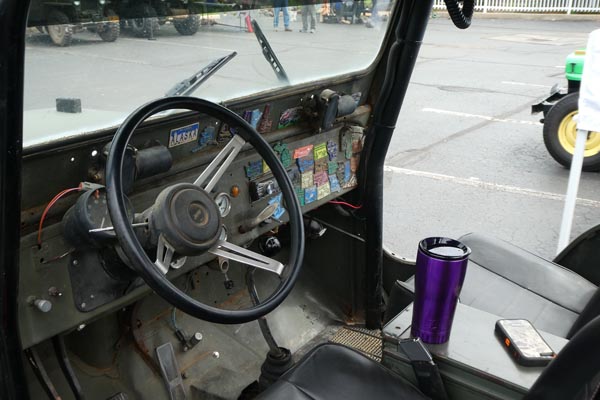 It was cool to see Joe's dash, with the heavy-duty electric wipers which have seen plenty of use, and the souvenir magnets (320K JPEG) he and Emily have collected from most of the 50 states. 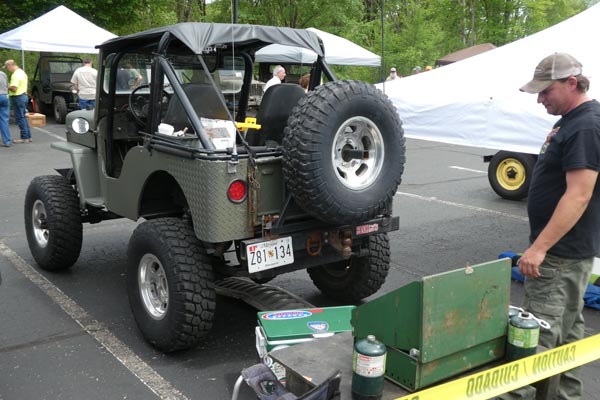 The Three Bee was pulling the same custom pop-up tent trailer seen in North to Alaska, and Joe and Emily immediately set up camp in the parking lot. 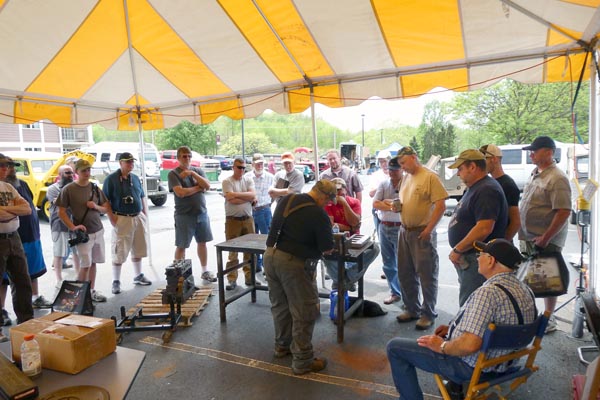 On Thursday, Keith Buckley had erected the big tent in the middle of the parking lot, which was to be headquarters on Saturday for the building of the L-134 engine. Friday morning it saw Rick "Scoutpilot" Pacholski of Old Jeep Carbs LLC rebuilding a fuel pump. There was a good crowd watching the whole process. 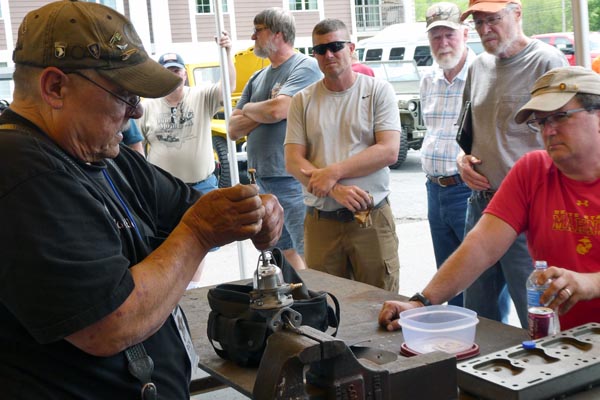 Here Rick reminds everybody that as you get close to the end, remembering to tighten up the pressure holding the glass bowl, is crucial to avoiding leaks. 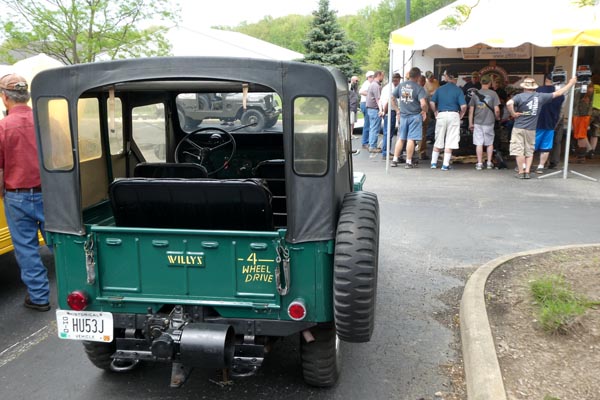 Right across from the crowd in the big tent, sat Dave Streithorst's green 1953 CJ-3B. I had seen this Willys before, but had never met Dave, who lives south of Dayton, Ohio. Turns out Dave has owned it for 35 years, after buying it from the widow of the original owner. 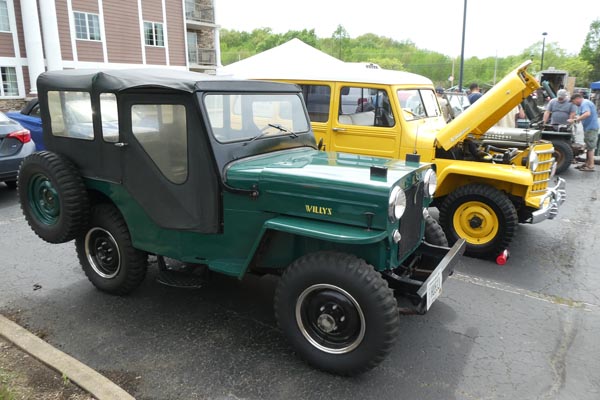 The Jeep had been repainted in the original color in the 1970s, and has a well-preserved Kayline vinyl top, plus an original front chaff screen.

The yellow Station Wagon in the background belongs to the Tedford family from Virginia. 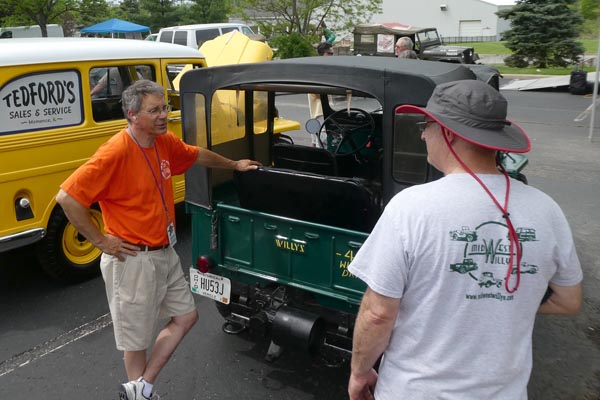 I soon found Dave, and also Rus Curtis who is in the final stages of assembling his 1954 CJ-3B in Alabama. Lots of details to discuss on this '53, including the rear PTO to which Dave has recently added the belt drive pulley. 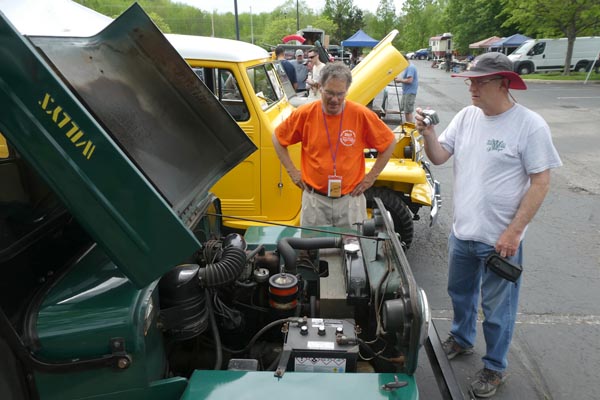 Rus wanted to take some closeup photos of Dave's Jeep; he's showing a great interest these days in things like wiring clips. He's hoping his Jeep will be ready for the Spring Reunion next year. 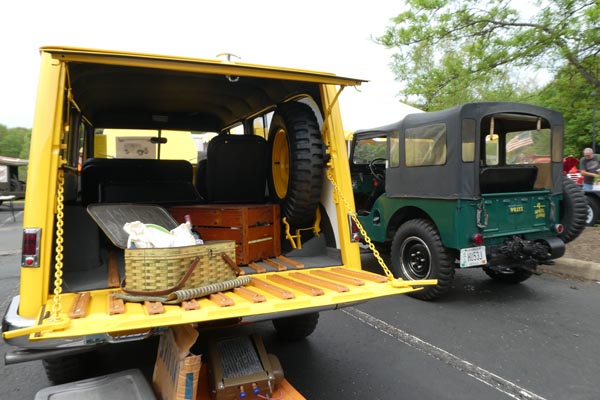 As it was getting close to lunchtime, it was hard to resist the picnic basket laid out on the beautiful tailgate of the Tedford wagon.

But I was about to see some interesting Forward Control trucks pull into the parking lot. Also still to arrive was the last one of this year's six high hoods.


Continue to Part 2: The Forward Controls Pull In.

Thanks to Rus and all of the CJ-3B owners for helping me document the Jeeps. -- Derek Redmond

Last updated 29 May 2018 by Derek Redmond redmond@cj3b.info
https://cj3b.info/Reunion2018.html
All content not credited and previously copyright, is copyright Derek Redmond