The Forward Controls Pull In 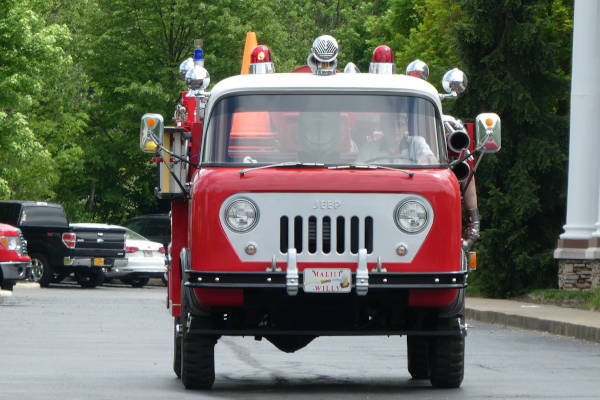 After driving it 100 miles from Pennsylvania, Andy Harvey arrived on Friday afternoon with the only example of this year's featured Jeep on the Spring Reunion poster: the Forward Control FC-170.

I heard a lot of "Look at that!" when people saw Andy's fire engine make its way through the parking lot. 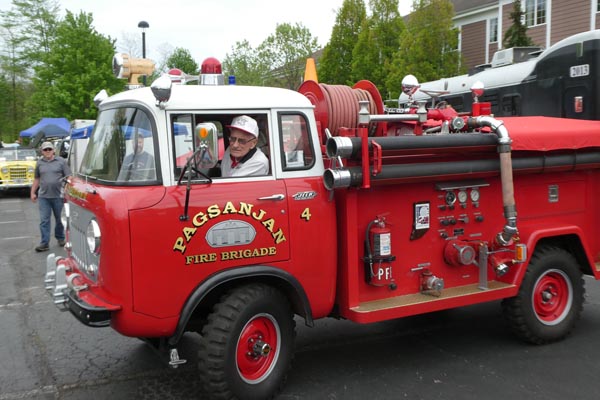 This 1965 truck was the last FC converted by Valley Fire Truck Co. in Bay City, Michigan, and was originally sold to the Wilkes-Barre, Pennsylvania Fire Dept. where it was in service until 1992. It was later repainted, and Andy has re-lettered it for his own "Pagsanjan Fire Brigade," named after a town in the Philippines.

See more history, details and photos of this Valley FC-170 in Wilkes-Barre Pumper 4 on CJ3B.info. 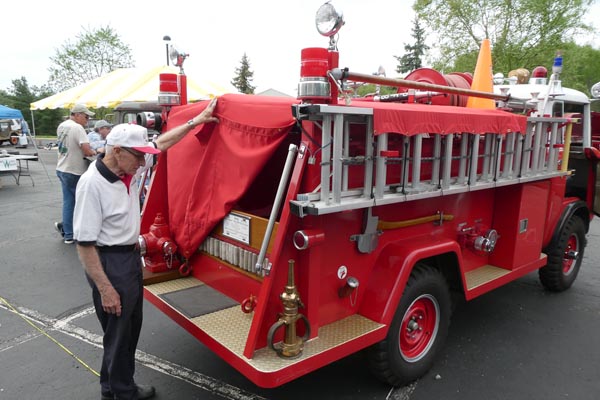 The pumper has plenty of equipment and accessories, including a load of hose in the back, so Andy had a custom cover made to protect it from rain, and he was fully expecting the tarp to be needed this weekend! 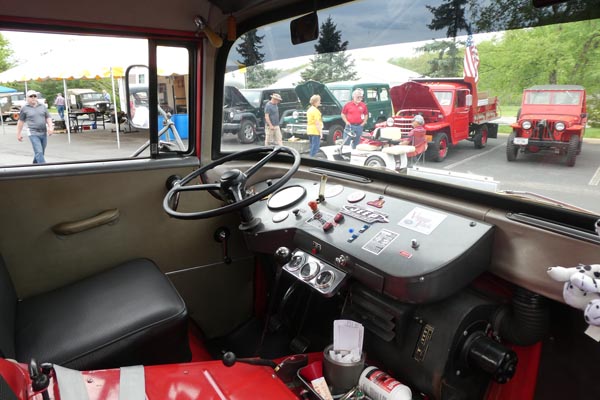 Like the rest of the truck, the Forward Control cab is beautifully restored, and sitting here you can imagine what a perfect piece of fire apparatus it was for navigating through the narrow streets of old Wilkes-Barre.

The plastic pipe sticking out of the dash is a temporary part of Andy's latest project, to build a visible brake fluid reservoir. 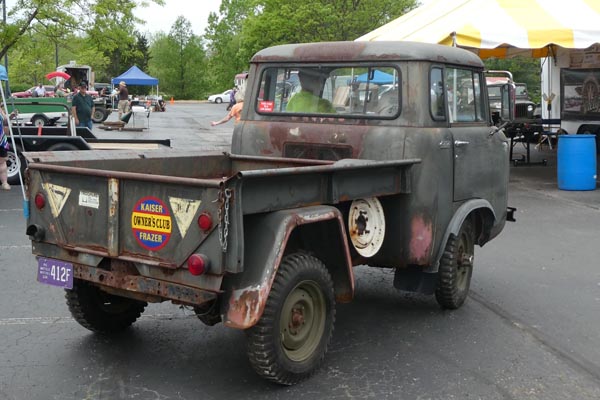 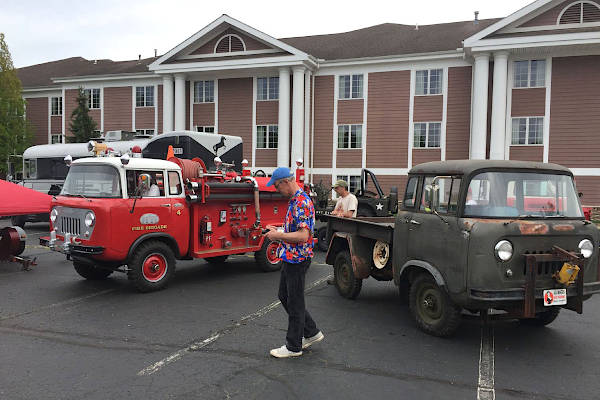 The two Forward Controls made a great pair in the center of the show area, and Jpet got this photo which included me, also busy taking photos. We were not the only ones who got pictures of the fire truck; Norris-Banonis were at the Reunion, and it's a good bet that it will show up in a future edition of their Holy Toledo! calendar. 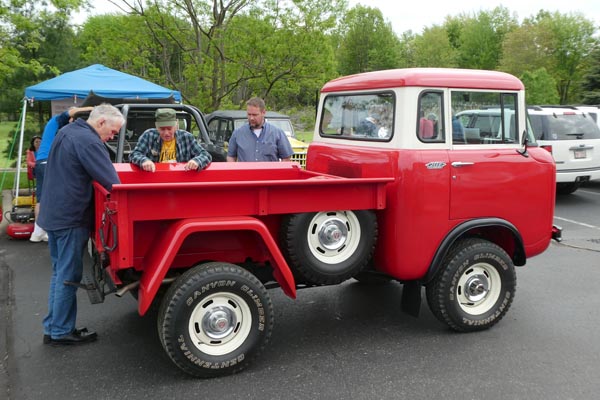 The other FC in attendance was also very impressive -- a nice restoration of a 1962 FC-150 by Mike Thomas (in the hat), who described how he had a sheet metal shop fabricate a pretty convincing reproduction of the rear bed. But the Chevy Rallye style wheels were a good clue that this was not a stock restoration. There were some major mechanical upgrades which grabbed William's attention. 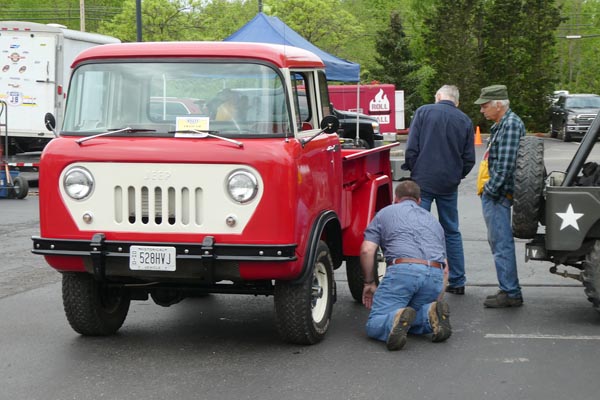 William took a close look, so I'll let him describe the drivetrain: "It was interesting. The F-head was adapted to a Muncie 4-speed car transmission using a Chevy bellhousing and a custom adapter plate. The 4-speed was accompanied by a D18 and Warn overdrive. The overdrive, rather than mechanical or cable shift linkage, employs an electric shift motor from a 2-speed medium-duty truck axle." 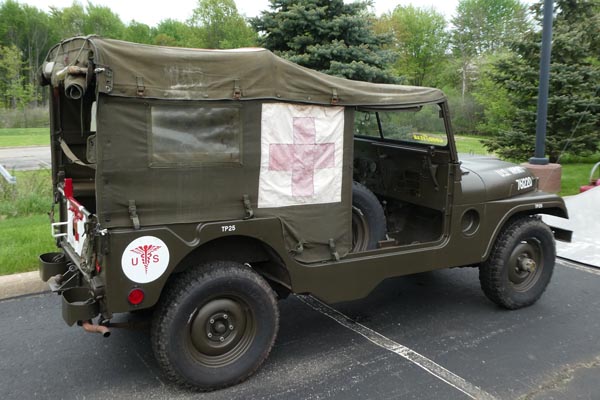 Back on the stock end of things, Keith Buckley's elegant M170 ambulance represented the military Jeeps of the CJ-3B era.

Along with helicopters, this vehicle made a difference in how quickly wounded personnel could get treatment in the Vietnam era -- see also Willys Military Ambulances on CJ3B.info. 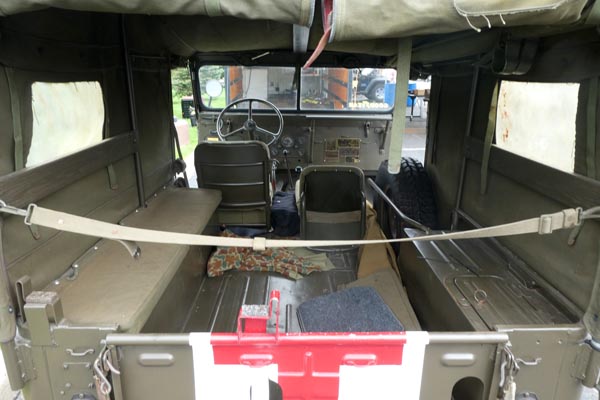 There is a lot of space in the back of the M170 -- it's not surprising that the Marine Corps also wanted to use it as a light troop carrier. 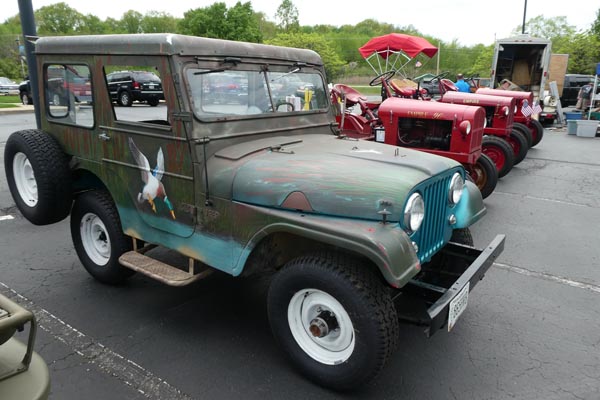 As well as his CJ-3B, Dave Streithorst brought along on his huge trailer this 1965 CJ-5 with a Meyer hardtop (130K JPEG) and an amazing duck pond paint job by the previous owner. It's seen here beside the lineup of Willys-powered Empire tractors. 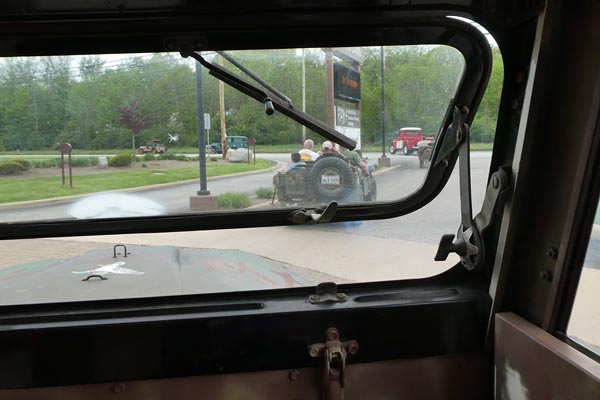 The weather stayed warm and dry, so when I caught a ride with Dave in the CJ-5 to the Friday afternoon picnic, the ventilating windshield was open. Another rare feature of the interior is the near-perfect headliner (200K JPEG) inside the hardtop! 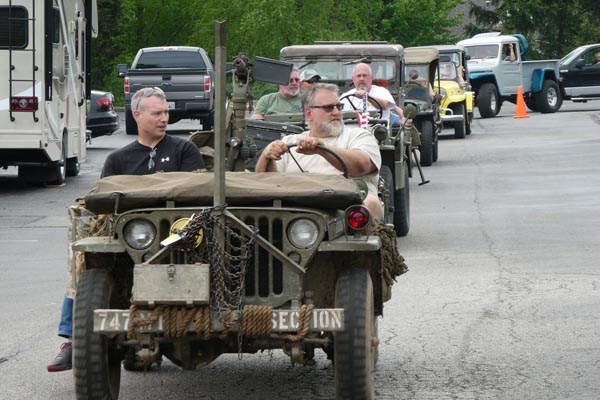 Greg Burke had his brother Tom riding shotgun in his MB. This was another member of the wheeling trip on Thursday, where it had done pretty well in the mud, despite NDT tires with no chains. 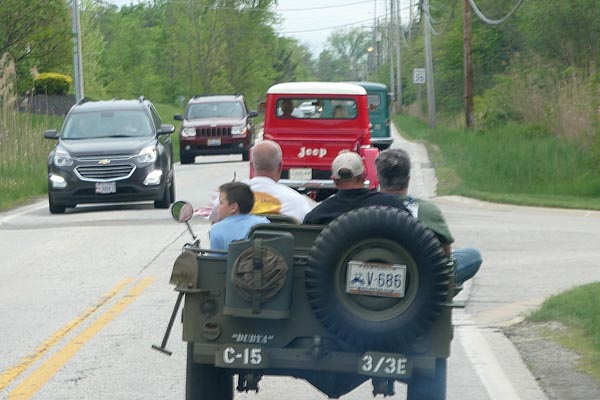 The Willys parade tried to stick together, but it was difficult with lots of Friday afternoon traffic, and some people almost got lost. 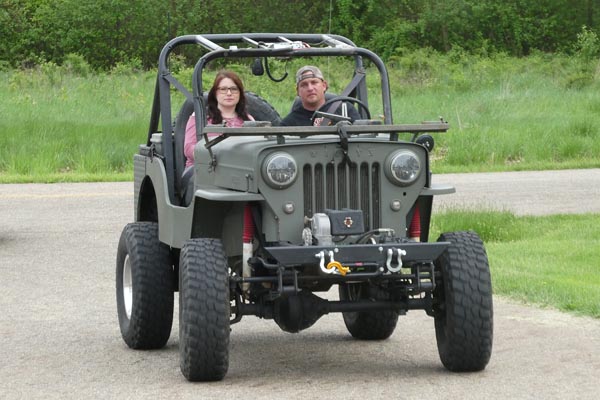 Joe and Emily arrived at the park in the Three Bee and were soon in the lineup for hot dogs (240K JPEG). 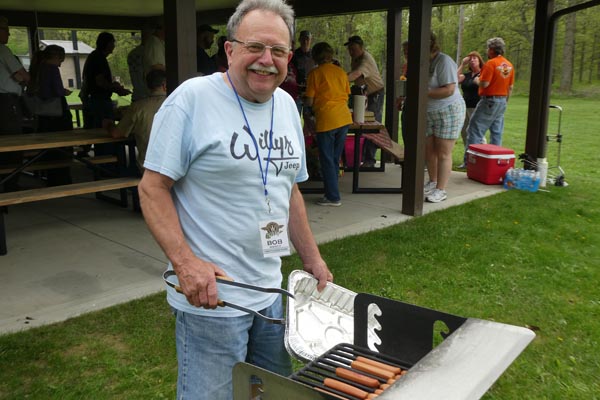 Chef Bob Miksch supervised the Willys wieners on the barbecue. 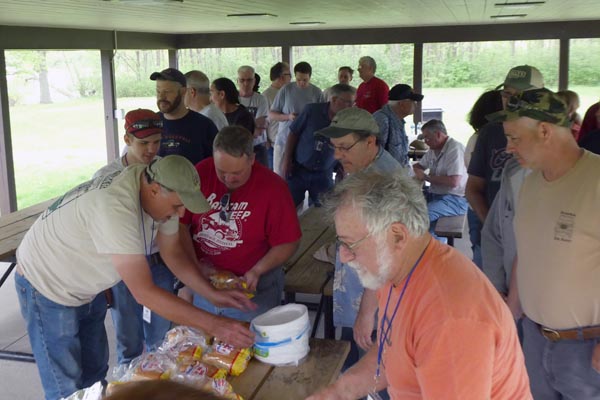 Nothing beats a hot dog cookout after a day outdoors. Everybody then headed back to the hotel for socializing in the lounge or the parking lot. Roseanna and I actually headed down the road to see the Aurora Community Theater's entertaining production of The King and I. 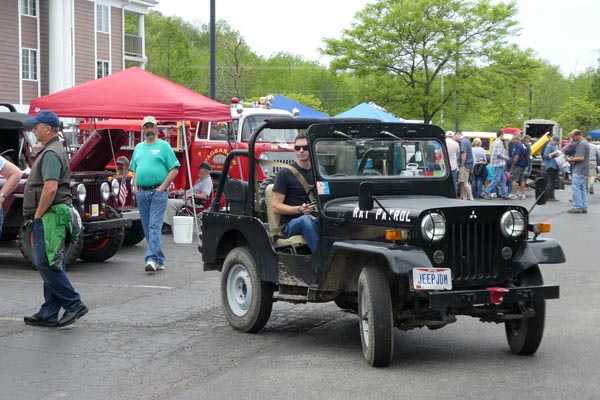 Saturday morning brought another surprise, when we heard the turbo diesel of Emmett Lodge's 1988 Mitsubishi J53, one of the later Japanese high hoods.

I had first met Emmett at the 2016 Bantam Festival in Butler PA, and I had forgotten that he was from Ohio. 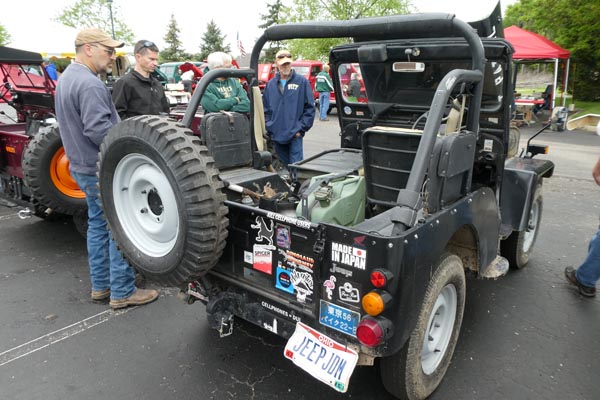 Jpet and Emmett traded some wheeling stories, and we also found out that Emmett is about to get some experience with another overseas licensed Willys descendent, as he has become an early adopter of the Mahindra Roxor utility vehicle. 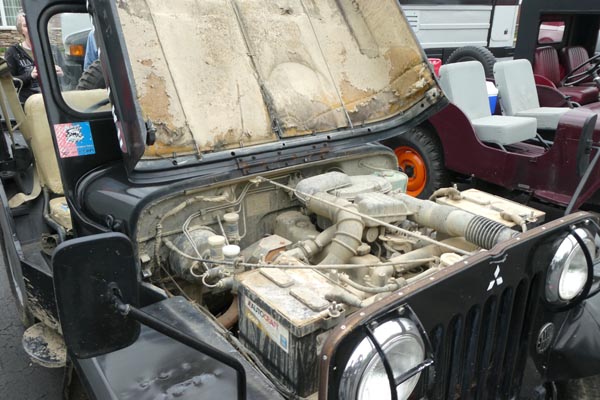 The 2.7-liter 4DR6 turbo diesel showed a few traces of having been offroad recently! 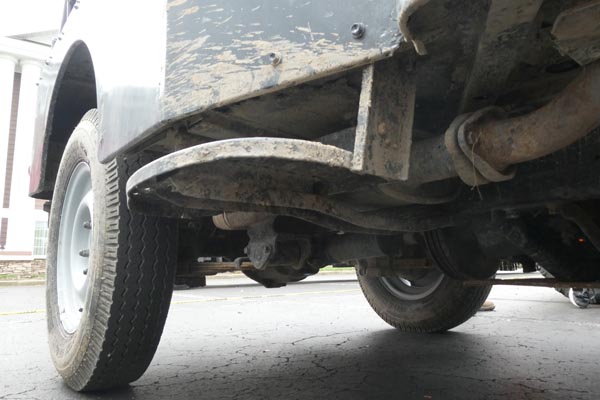 Rus Curtis pointed out a feature of the Mitsi Jeep to me, which somehow I had never noticed. The side steps don't hang down as far as the Willys version, making them much less prone to getting bent. It was a change made by Mitsubishi on their earliest CJ3B-J3 Jeeps in 1953. Rus says he plans on putting similar steps on his '54 Willys. 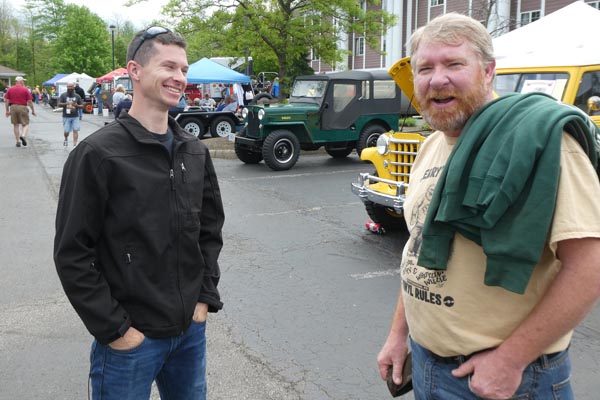 Then who shows up but Gerald Oswald from Butler PA, who has been busy preparing for this year's Bantam Fest, but decided to make a quick visit to the Reunion, even though he didn't have time to bring his '63 3B. 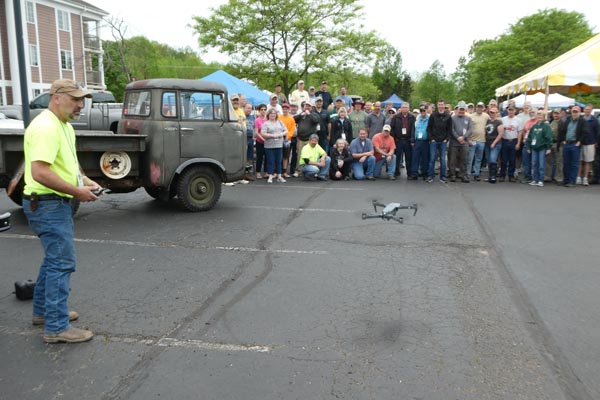 At 11:00 everybody gathered at the big tent for a group photo, and Jpet launched his camera drone. 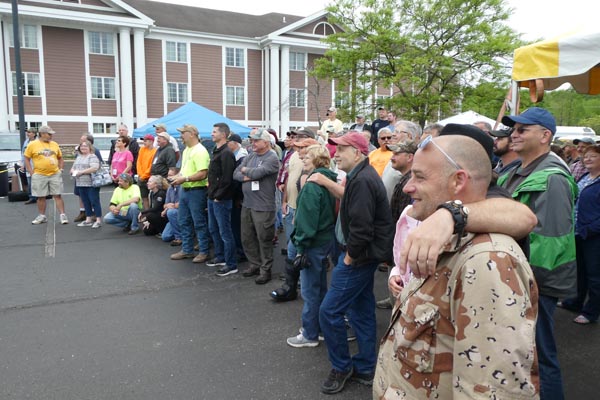 A group photo has been a Reunion tradition for about 10 years now -- I think it actually started at the Fall Reunion in Missouri. 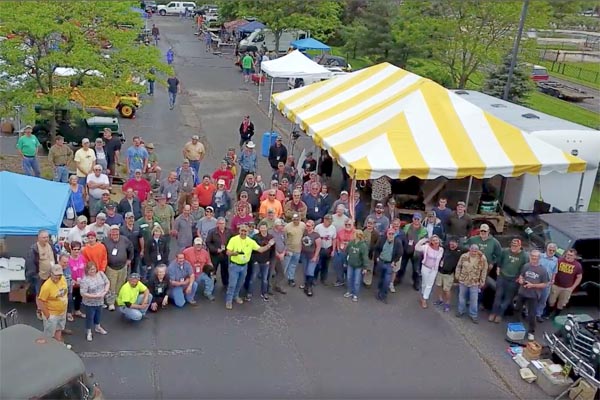 The newest tradition is for Jpet to take a bird's eye photo with his drone "Hawkeye", which can easily capture a big group, and allow the photographer to be in the picture too. 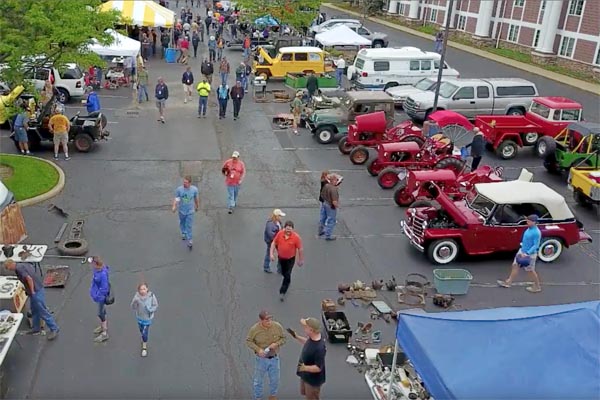 While Hawkeye was flying, Jpet grabbed some shots of the action in the parking lot. Here's another nice Jeepster which I didn't have a chance to look at, next to the Empire tractors. 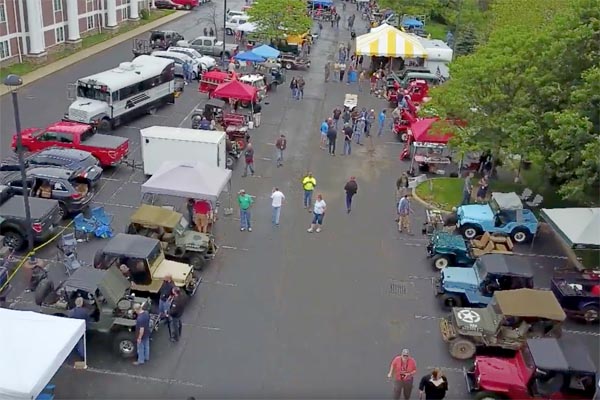 Here we're back near the east end of the parking lot. Looks like a bunch of little toy Jeeps. 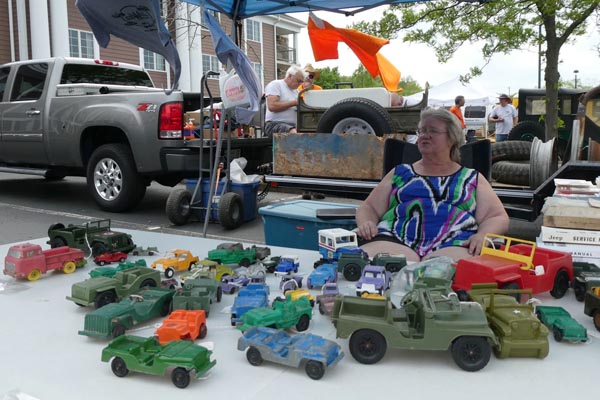 Did someone say toy Jeeps? Jo Sheets had a few at the Midwest Willys table. Harry had a bunch of parts on the trailer, but Jo said they decided they couldn't bring as big a display as they have had at some past Reunions. 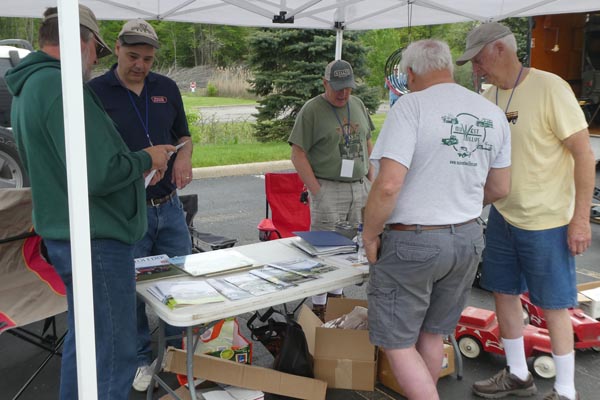 Harry also visited the Norris-Banonis table, where Bill and Kevin were selling calendars and subscriptions to The Dispatcher, as well as making contacts for future photos and articles. 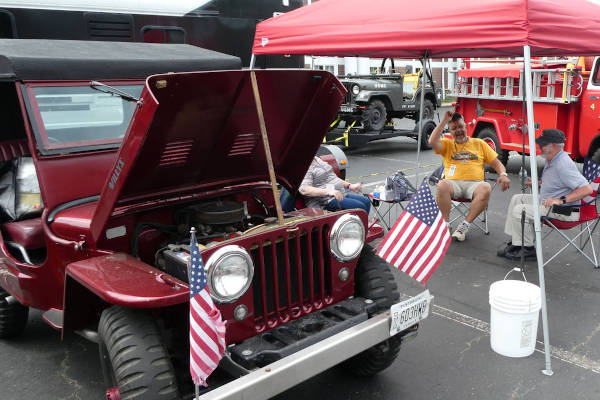 Socializing continued, mostly in the shade as the day warmed up. Here Bob Gallagher relaxes under his tent, between his CJ-3A and the FC-170. Bob was pretty excited earlier when the fire engine pulled in next door to him.


But there were still some important parts of the Reunion coming up. Fortunately the weather would continue fine, for a big group photo (and video!) of the CJ-3Bs, and I would also get some shots of the L134 engine build, and the evening banquet.

Continue to Part 3: The Weather Holds -- or return to to Part 1.

Thanks to Jeff Petrowich for the drone photos. -- Derek Redmond