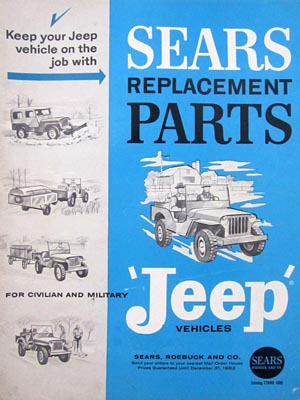 From the 1950s into the 1970's, Sears, Roebuck and Co. in the United States issued a substantial annual catalogue of Replacement Parts for Civilian and Military Jeep Vehicles. This was in addition to a book of Parts for Automobiles, Trucks and Dune Buggies. The Jeep catalogue apparently evolved out of a section of aftermarket parts in the larger Sears catalogue. Gene Rogers notes, "I ordered parts from it often thru the 70's -- it was the best priced source of most parts," and says the final edition was in 1981.

This cover is from the 1962 edition; the previous year had used the same design but with a green background. The drawings on the cover show Jeeps ranging from the MB up to the CJ-3A, but in fact owners of newer models were also taken care of, and like most good Jeep parts suppliers, Sears made sure that the customer knew "How to Identify Your Jeep Vehicle" (30K GIF).

The back cover had the Sears "no down payment" credit terms, as well as the catalogue index (360K JPEG) which almost duplicated the table of contents of the Willys Motors Parts List books. 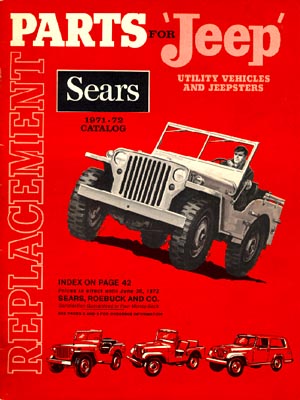 You could pick up the phone and order virtually any small part in your Jeep, or large items from remanufactured engines (80K GIF) to roll bars (80K GIF), and other aftermarket accessories. Most parts bore the Sears or Allstate brand names, although some items were from other companies (usually not mentioned by name.)

Flower power! Here's an aftermarket accessory that provides a good clue to the vintage of the edition of the Sears book seen at left (1971). 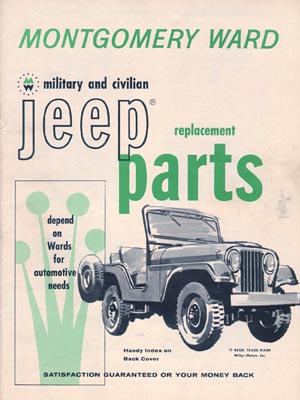 A similar Jeep catalogue was soon issued by the older and more conservative Montgomery Ward & Co., with the slogan "Satisfaction guaranteed or your money back," which the company had coined in 1875 (and which Sears also used on the 1971 cover above.)

The Ward catalogue index (200K JPEG) had exactly the same categories as the Sears index above. However, Ward changed the order of the sections, perhaps to make it look different from the Sears book, but also to put the most likely mail order items, like soft tops, winches and free wheeling hubs, at the top. Page 5 from this 1962 catalogue includes white vinyl soft tops, gasoline heaters, and free-wheeling front hubs (50K GIF). 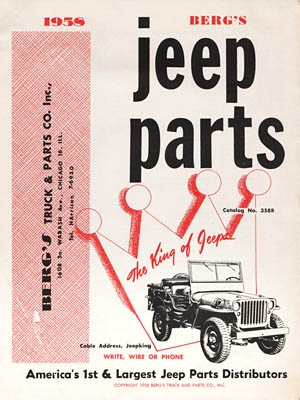 Berg's Truck and Parts Co. in Chicago was owned by Hyman Berg, who styled himself as "The King of Jeeps" and had started his business by selling parts from World War II surplus vehicles. The Berg's catalogue index (240K JPEG) was again the same as the Sears and Willys parts lists, but Berg's also carried an inventory of used parts.

The similarity in the covers suggests that there was some relationship between Berg's and Montgomery Ward, although maybe Ward simply copied the Berg's cover. A later 1966 catalogue cover (40K JPEG) made the Berg's name much more prominent. 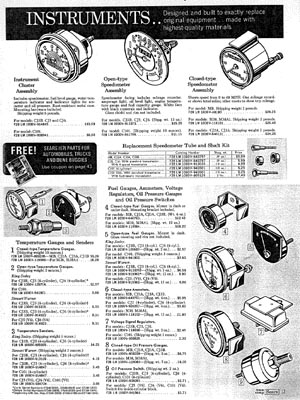 The Sears catalogue had loads of illustrations -- this is the page of dash instruments from the 1971 book. There were also some Willys parts list illustrations used -- see a page of engine parts (260K JPEG).

Included in the electrical section were 24-volt parts for the military M38 and M38A1, although some of them were expensive. Ron Ingram points out that $376.50 for a generator had to hurt, especially in 1971 dollars! 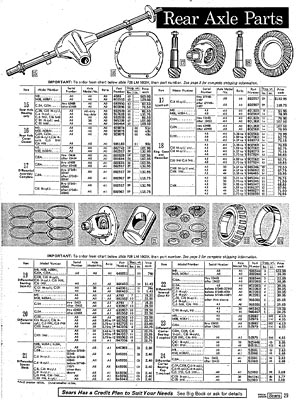 Another page that gives an idea of the complete selection of small parts available, and why it was important to know what Jeep you had, is one of several pages of rear axle parts.

Some of the little parts are less than a dollar. If you have a copy of the catalogue, could you please sit down and add up the cost of building a complete Sears Jeep? 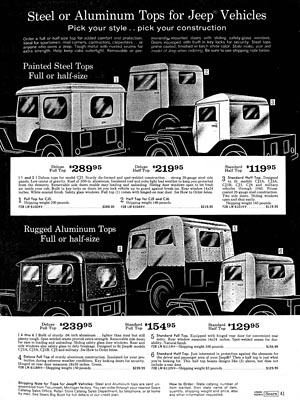 There was also a selection of soft tops (60K GIF). 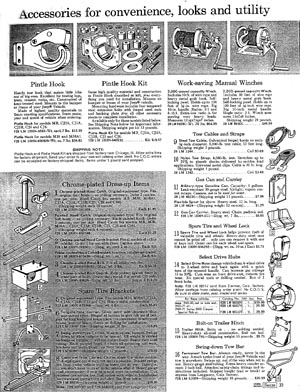 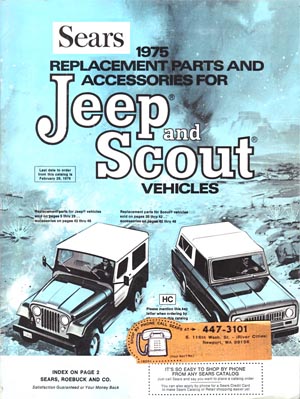 By 1975 the catalogue had added parts for the International Harvester Scout, although the majority of the pages were still devoted to Jeeps. 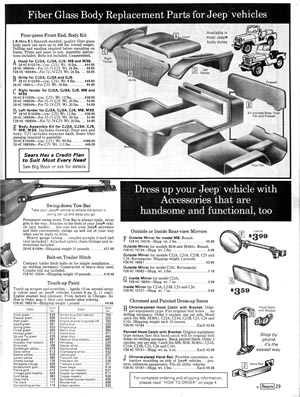 The book now included fiberglass body parts. The note saying, "Available in most Jeep body styles" was code for "No CJ-3Bs." Military front grilles were also not available. 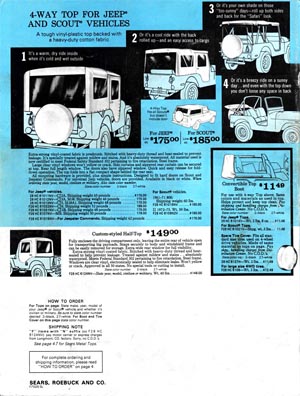 The back cover was devoted to soft tops, which were by then apparently very popular.


Although parts shopping is now often done on the internet, as of 2017 some parts suppliers still publish paper catalogues.