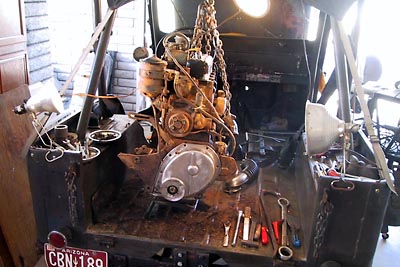 This engine, with engine number 4J51093 stamped on the block above the water pump, is almost certainly the original engine for Chase Myles' 1954 CJ-3B in Phoenix. According to the Surviving CJ-3B Jeeps List, that engine number corresponds to the Jeep's serial number 454GB219746 in a way very similar to the numbers of many other 1954 Jeeps in the Database.

Keith Buckley has done a regression, which is a systematic statistical analysis, of the numbers for all the 1953 Jeeps in the Database. It indicates what engine stampings can be considered original for a given 1953 serial number (VIN), with 95% confidence. This has been plotted on the graph seen below, which allows quick reference.

A similar graph further down this page plots engine and serial numbers for 1963-66 CJ-3Bs from the Database, along with data from plant records.

Keith says, "I got to playing with the owner data and analyzing it. I eliminated known outliers, and anything with a suffix indicating it was an overbore or non-standard bearing. Those "B" suffix engines are always much higher numbers because they were inserted in batches of 100.

"The engine number was commonly 2000-3000 higher than VIN. This makes it easy to determine if the engine in a 3B is suspect."

Barely noticeable in the 1953 plot is a bit of a change in the curve around the middle of the 1953 model year. For the first half, the engine numbers seem to be generally only a couple of hundred higher than the VIN. Then around VIN 21000 there are suddenly several which have engine nos. slightly lower than the VIN, as if the plant was using up old stock. From there on, the engine numbers rise faster, as if the 4J engines are also being put into other models, so that by the end of the year a CJ-3B probably had an engine number more than 3000 higher. Maybe this was the result of the 2,267 stripped chassis 3B's which perhaps went into production in the latter part of the year?

The following are the Jeeps plotted from the Database as of mid-2003. Not included here is the VIN prefix of 453GB2, or the engine number prefix of 4J.

Factory engine number documents found by Keith, show some changes that are harder to spot from the limited number of owner records in the Database, but when you see the two together they correspond pretty closely.

Thanks to Keith Buckley for putting this together. -- Derek Redmond