Some CJ-3Bs carry various numbers stamped into the frame, which appear to be related to the serial number (VIN) as well as perhaps to parts identification.

Reed Cary summarizes what we (don't) know, in a posting on the CWML e-mail list: "Sometime after the Kaiser aquisition of Willys-Overland (and perhaps after the using up of W-O frames) some CJ-3B frames were stamped. The reasons why, when, etc. are still shrouded in history."

"In view that W-O discontinued offering stamped frames when they brought frame manufacture in-house from an outside vendor, the reverse might conceivably have occured at some time early in the Kaiser take-over period; that is to say, the frames were out-sourced and therefore stamped, for some shorter period of time.

"And although this won't tell you which "year model" you have -- as even those were juggled around to suit sales, with new tags offered from the factory to the dealers (at least in W-O times) -- it will offer an indication of the time frame of your vehicle. Restorers, generally, consider that the axles are pretty good indicators of a Jeep's dates, figuring that they are likely the last to be swapped out."

Where to Look for a Serial Number 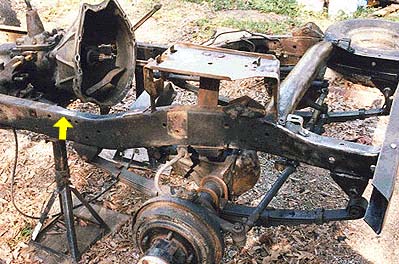 This photo of Jamie Carter's frame indicates the most common location of the stamped numbers shown in the photographs below. They are visible with body on or off, just in front of the edge of the body tub (toe gusset).

On top of the rear of the right frame rail, near the rear spring hanger, is another place to look for the serial number on a CJ-3B 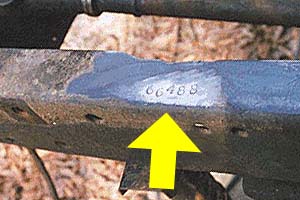 Five stamped numbers approx. 3/8" high. The numbers are close, but not identical, to the last five digits of the VIN. Photo by Jamie Carter. 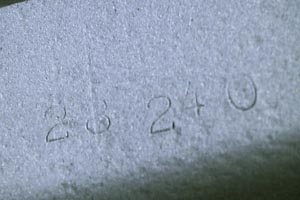 Rus Curtis says, "These are the numbers from my '54 CJ-3B. There was enough crud on the frame that I had toget it blasted before I could easily read the numbers." See also the matching VIN plate on the body (40K JPEG).

1956 CJ-3B: Rob Tate reports that the last five digits of the VIN 57348 26812 are "stamped on the frame above the hanger for the rear spring (actually about four inches in front of it). They are also stamped directly above the rear hanger for the front spring. Both on the passenger side." 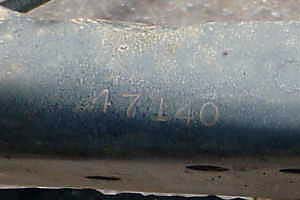 
1961 CJ-3B: Mike Tollett has his VIN 57348 80225 in both places: "During my frame cleaning I found the last five numbers of my serial number on the frame, on the passenger side on top of the frame up near the front axle, and at the rear behind the axle." 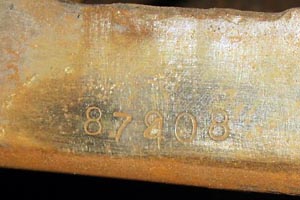 Dirk Thiermann's Jeep in Chile is registered as a 1962 and has a frame stamping consistent with a 1962 VIN of 57348 87408. An interesting feature of this stamping is the 9 in the middle, overstamped with a 4.

Stephen Heape has found what seems to be a very complete set of numbers on his thoroughly sandblasted 1962 frame. He has taken detail photos (50K JPEGs) and describes their locations: "My '62 CJ-3B has '176R' stamped just behind the bumper mount on the right frame rail. Mine also has the number '176L' stamped in the same area of the left rail. These numbers must correspond with the part number for the two frame rails during frame assembly." 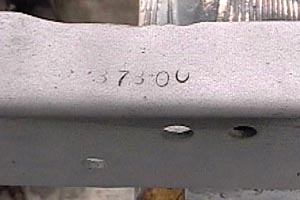 1962 CJ-3B: Stephen says, "The last five digits of my Jeep's serial number (87800) occur in two places on my frame. First, it is stamped about 6 inches behind the rear mounting point of the battery tray. The other place that the number is stamped is just in front of the rear cross member on the top of the right frame rail." 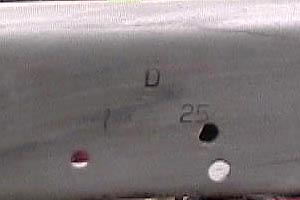 "The next number is 7-D-25 located just in front of the first protruding body mount on the right frame rail." (The significance of this number is unknown. Other examples with different digits are described below.) 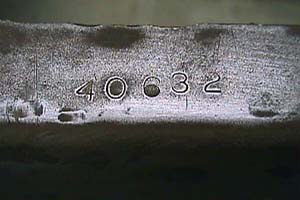 The last five digits of the VIN, lined up with the rear of the rear spring mount. Photo by Paul DuBois. See a photo showing a larger area (30K JPEG).

Nearby on the outside of the frame, just a little bit behind the rear spring mount, are the numbers 4-D-22 arranged in a triangular shape (30K JPEG). 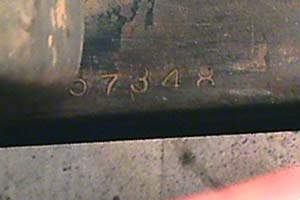 Prefix of the VIN (used on most post-1955 CJ-3Bs). Photo by Paul DuBois. See a photo showing a larger area (40K JPEG) with the body lifted slightly off the frame, revealing no additional numbers before or after 57348.

On the outside of the frame, a few inches further back, are the numbers 1-D-14 arranged in a triangular shape (50K JPEG).

Rene Rodas in Puerto Rico has a 1963 CJ-3B with the VIN on the frame about 18 inches from the battery tray, and the following numbers stamped on the frame in triangular shape: 3-547-12. This is different from the examples above, with "547" rather than "D" at the top. 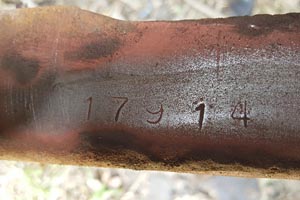 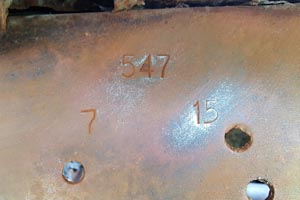 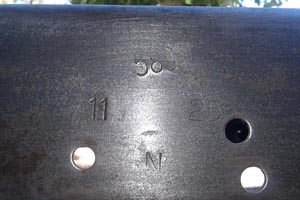 
Engine Number on the Frame 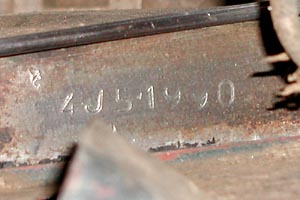 This is the only example we have seen so far where the engine number appears on the frame. The style of the digits is different from the presumably factory-stamped examples above, although the style of the factory stamps is not entirely consistent either. 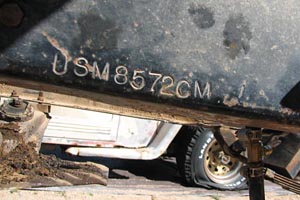 Turk Sierras found this number on his early 1954 CJ-3B, below the driver's door. Possibly a military marking rather than a factory stamping? 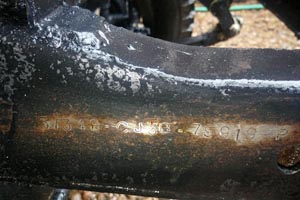 Nidhin Kurian found this stamping "57348-CJ3B-79919-P" on the side (rather than the top) of the frame rail on his 1961 CJ-3B in India. It's not clear whether this unusual stamping was done by Willys or by Mahindra in India when it was assembled. 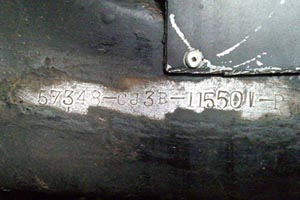 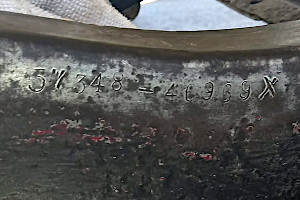 Ray Spudz has a 1958 CJ-3B assembled in Australia and delivered to the Air Force, with the complete serial number on the side of the left rear frame rail.


Thanks to all the contributors. Additional information or photos are welcome. -- Derek Redmond