The Willys-Overland 1945-61 production figures collected by Willys employee Norton Young and transribed by Charlie Weaver in the 1990's, are considered pretty accurate, but do not cover the last six years of CJ-3B production. A new set of Jeep production figures has been located by Keith Buckley, who has compiled the table below showing the CJ-3B data. The original documents were apparently rescued by an anonymous collector, from a document retention room at the Toledo plant which was demolished in 1983. These records cover the years 1960 to mid-1967, and comprise serial numbers and production totals for all models, broken down on a monthly basis. The 1960-61 figures included below correspond exactly to the earlier Norton Young figures.

Each of the serial numbers below would be preceded by the prefix 57348 (before 1963) or 8105 (after 1963). Annual production totals (based on model year) and serial number ranges have been summarized and included on the CJ-3B Serial Numbers and Production Figures page.

Note: the easiest way to date your serial number may be to find its position in our list of Surviving CJ-3B Jeeps.

These figures are somewhat different from the CJ-3B production figures collected by American Motors in 1977. As we have speculated before on CJ3B.info, the discrepancies might be due to some types of production not being included in the AMC figures, or to missing numbers in the series of serial numbers (meaning that the production totals as seen above could be too high). For a summary of CJ-3B VIN's and annual production figures from both sources, see the CJ-3B Serial Numbers and Production Figures page.

A Look at the Documents

The pages that we have available for 1960-63 show the serial numbers in the format seen in the example below, for model 57348 (CJ-3B). A couple of specific CJ-3B VIN's are listed as "Final Old" and "Face Lift". The specific changes represented by these terms are unknown.

After mid-1963, the format of the records changes, showing the months vertically for a given model, as seen below. The two possible prefixes (57348 and 8105) are also shown.

Interesting features of the records include the fact that production in a given month may be as little as one unit (February 1965) or zero (April-May 1965).

For 1963-64, engine numbers in the 3J (L-head) and 4J (F-head) series are also shown. The ranges shown match neatly with the engine numbers found in our list of Surviving CJ-3B Jeeps.

See the complete photocopies of the pages we have available:

At the bottom of the charts is a guide to interpreting the model numbers (the VIN prefixes): 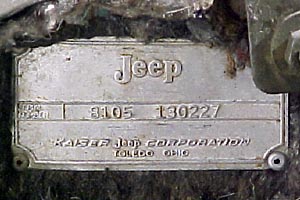 The guide above confirms most of the following information (source unknown) regarding the meaning of the VIN digits, with the exception of a digit indicating engine type. In the case of the CJ-3B serial numbers, the digit indicating LHD or RHD also seems to be missing from the actual VIN's (photo at right by Felipe Santos).

I would be interested in any further information on the source or accuracy of this diagram.

Thanks to Keith Buckley for making these figures available. -- Derek Redmond