More Siblings of the CJ-3B 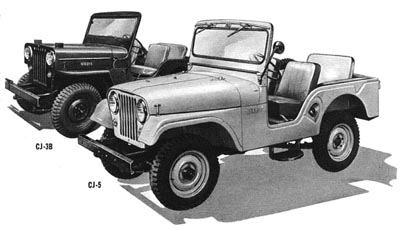 The year 1955 was a big one for Willys Motors (by then part of Kaiser Industries), as they dropped out of the passenger car market, but had more new Jeep models in one year than ever before or since. It marked the end of that brief period in the limelight for the Jeep CJ-3B, the two years when it was the newest Universal Jeep in production.

Willys had produced a few examples of the CJ-5 late in 1954, but now began to turn them out in earnest. Based on the Korean War M38A1, with its rounded-front-fender design, the CJ-5 would become the all-time-classic Jeep, and be produced with only minimal changes for the next 28 years.

The first and last (seventh) slot in the front grille were "squeezed" to accomodate the headlight openings on the CJ-5. The M38A1's smaller headlamps, like those of the WWII Willys MB, had been mounted on a hinged bracket so that they could be swung inwards to illuminate the engine compartment. The civilian CJ-5 used the same grille but had larger fixed headlights and hence had the squeezed first and last slots.

The CJ-3B, in fact, was the only U.S.-made civilian Jeep that didn't have the squeezed grille, until the Wrangler TJ in 1997. The Mahindra CJ-540 Indian-made version of the CJ-5 had smaller headlights without the squeezed grille. 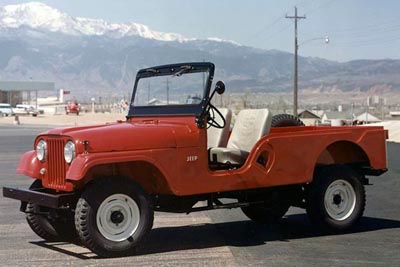 The CJ-6, similar to the CJ-5 but with a longer wheelbase, was advertised as a half-ton, and would carry 7 people or a 1500 pound payload. This advertising photo was taken circa 1962 in Colorado Springs (see Why did they take the Jeep to Colorado? on CJ3B.info.)

See also a right side photo of a 1967 CJ-6 (80K JPEG) restored by Buck Toenges, giving a good look at the extra capacity. 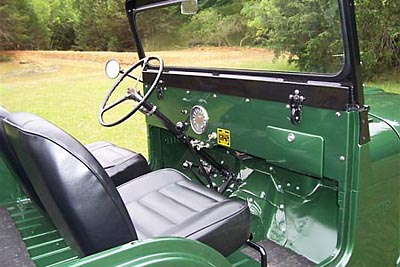 Both models had a new instrument cluster and new and brighter paint, including for the first time the bright President's Red, which would become a favourite Jeep color. Craig Evins' nicely restored 1956 CJ-6 (left) is in Julep Green (see also a front view and the F-head engine, 40K JPEGs). 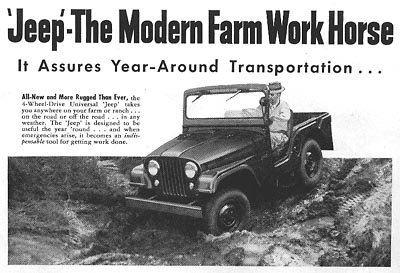 "All-New and More Rugged Than Ever," says this March 1955 ad in Successful Farming magazine (see the complete ad, 250K JPEG).

The Dealer's Merchandising Manual touts the following new features of the CJ-5: 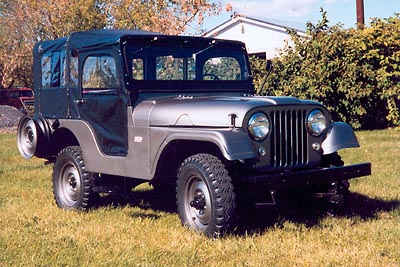 The CJ-5 hood was the same as the M38A1, with a cutout on the right side (60K JPEG) for accommodating a snorkel when the military Jeep needed to be driven in waist-high water, until 1972 when American Motors stretched the frame and hood to fit the straight-six 232 cu.in. engine.

The pre-1972 CJ-5 can also be identified by the lack of reflector/sidemarker lamps in the front fenders, and the battery box (accessible without opening the hood) in the cowl. Bow sockets on the rear of the tub held the supports for the non-folding soft top. The late Joe Caprio's restored 1958 CJ-5 seen here has a Kayline Luxair top (see also a rear view, 100K JPEG). 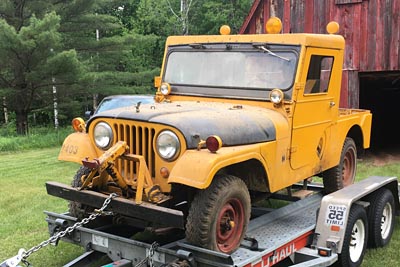 The CJ-5 and 6 had the already-familiar "Hurricane" F-head 4-cylinder engine for the first ten years, with the "Dauntless" V6 available as an option starting in the 1966 model year.

This V6-powered CJ-6 built in November 1965 served as a snowplow for the City of Milwaukee, and was later used at a cabin in northern Wisconsin. The factory V6 is indicated by the "A" in its 8405A serial number prefix (80K JPEG). Photos courtesy Mark Miller. 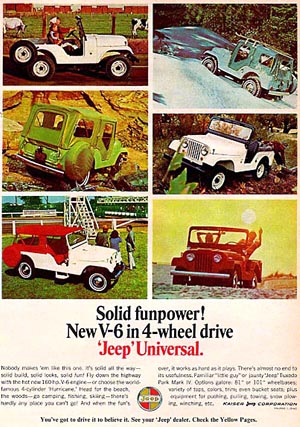 Although the new Jeeps continued to be workhorses, this 1966 ad stressed recreation and colorful options. It was a big change from earlier Willys advertising aimed at farmers and industry, but it still used the Jeep Universal name, which would soon disappear.

The ad includes the Tuxedo Park models (70K JPEG) which were optional packages starting in 1961, and had their own CJ-5A and CJ-6A designations from 1964-68. 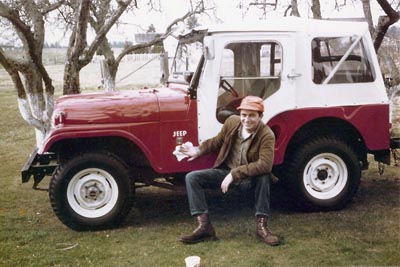 Folding vinyl Whitco tops became the standard soft top in the 1960s, along with 15-inch wheels. Dick Williams' 1968 CJ-5 in Washington state is seen here when new; note that the wheels have hubcap lugs. 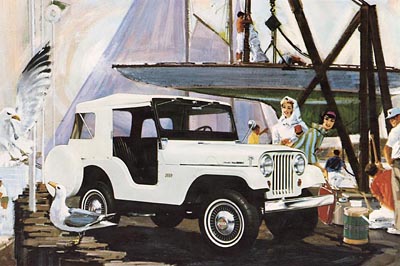 But the only CJs that came with hubcaps and whitewalls standard were the CJ-5A and CJ-6A, known as the Tuxedo Park Mark IV. In addition to the extra chrome and special paint and vinyl colors, their features included column shift transmission and single-lever transfer case.