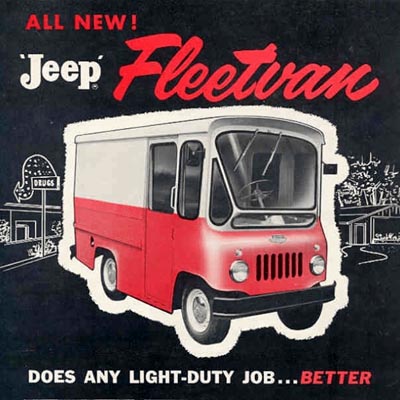 People have been known to suggest that turning the CJ-3A into the CJ-3B by enlarging the hood in order to fit the F-head Hurricane engine inside, resulted in a Jeep that was, shall we say, ugly. Apparently this opinion was not uncommon even among those who worked in the Jeep factory at the time.

But practicality was more important than looks to Jeep designers -- witness the Forward Control Jeep trucks. And perhaps the least attractive Jeeps of all were the ones which resulted when they beefed up the two-wheel drive DJ-3A Dispatcher with a Hurricane engine and some additional cargo space, to create the Fleetvan FJ-3 and the slightly longer FJ-3A (left).

When you see a photo of a Fleetvan, you tend to think it looks something like the big FedEx delivery trucks of today. But it was really a mini-van, and this illustration by Hubert Cossard shows that little more than bodywork (and steering and seats moved up to clear the F-head engine) differentiated the FJ from the DJ Dispatcher. 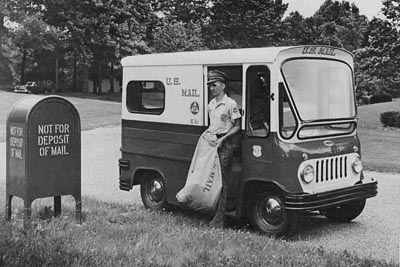 The Fleetvan was produced first as the FJ-3 right-hand-drive postal delivery vehicle. The FJ-3 was only 135 inches long but was rated for a 1000 pound payload. The Fleetvan mated the F-head 4-cylinder engine with either the T-90 or an optional Borg-Warner automatic transmission.

This photo apparently shows an early version, probably built in 1960, and tested by the U.S. Post Office as experimental vehicle X35. It has the traditional Jeep radiator guard with seven vertical slots. 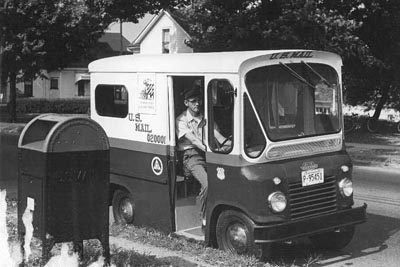 The production FJ-3 is identifiable by its horizontal grille slots. See a brochure for the postal FJ-3 (60K JPEG). Also from the brochure, see the specifications for the FJ-3 (30K GIF). 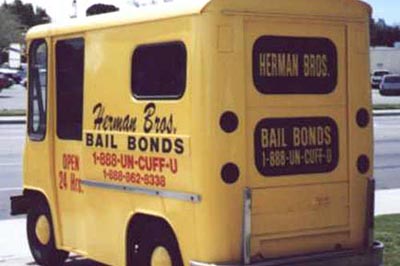 Reagan Woolf photographed this LHD FJ-3 serving as a billboard (40K JPEG) in Lancaster, California. He reports that on the back door, a manufacturer's name is embossed on the sheet metal: "Highway Products Inc., Kent Ohio." 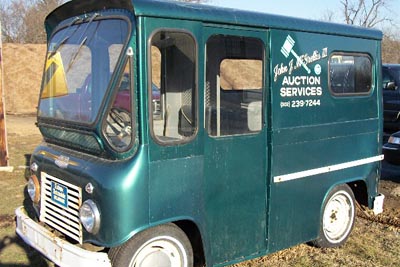 Not all RHD Fleetvans were sold to the Post Office. Jim Teal photographed this one in 2011, and said, "It was purchased new by an oil burner service company in Wilmington, Delaware and the second owner is currently an auctioneer. The oil serviceman wanted right hand drive because he worked in the city and it was easier and safer to work out of the curb side of his service truck."

This FJ was missing one of its distinctive hubcaps (80K JPEG). 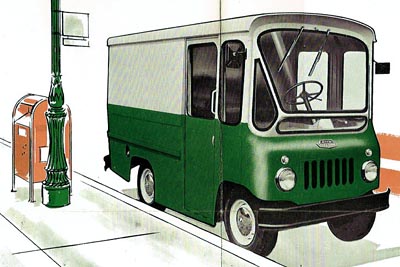 Nineteen inches longer than the FJ-3, the FJ-3A returned to the vertical grille slots which made it look a bit more like a Jeep. See the full brochure for the FJ-3A (450K JPEG), and FJ-3A specifications (15K GIF).

It's not entirely clear which paint schemes were used on the FJ's. For the 1961-62 Willys paint sheet listing two-tone paint combinations, see Paint Samples 1959-65. 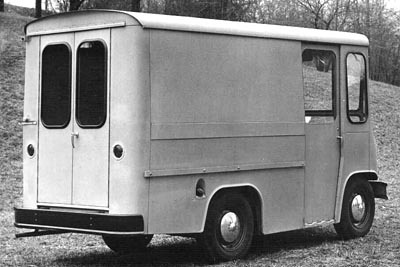 The FJ-3A had a major rear overhang, with an overall length of 154 inches on an 81-inch wheelbase (and don't forget it was cab-over-engine.) Its payload was still 1000 pounds.

A set of photos in the "Images in Time" collection at the Toledo Lucas County Public Library captures details of an FJ-3A. There's no licence plate and the pictures are posed like factory photos, but the truck is clearly already well-used, with the paint damaged and the front badge missing (see a front left photo, 120K JPEG). 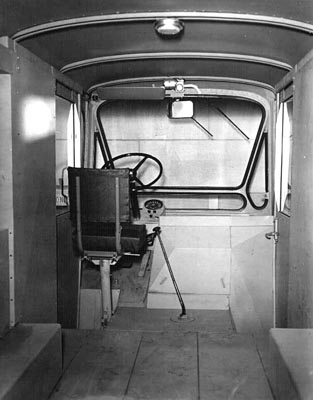 This interior photo shows the long transmission stick and the motor for the two wipers. See also details of the front entry (50K JPEG) including the swing-forward driver's seat and a close look at a hubcap.

The Fleetvan boasts 170 cubic feet of cargo space, but in case you're still thinking of the it as a big vehicle, see it in comparison with the Wagoneer in Willys brochure 6217 (90K GIF). 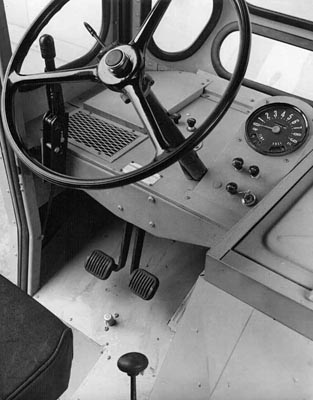 The FJ dashboard features the standard Jeep instrument cluster, and a hand brake not found on any other Jeep.

Lots of glass means good sightlines for maneuvering and parking -- Fleetvan advertising claims the dirver can see the road surface three feet in front of the vehicle. 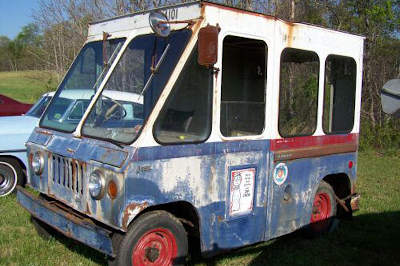 The U.S. Post Office was the Fleetvan's only real success, which led to some follow-ups. The larger FJ-6 Fleetvan was supposedly built on a CJ-6 chassis. Factory records show 3,886 produced during the 1965-66 model year, followed by 3,073 of the slightly modified FJ-6A in 1966.

The Fleetvan was also certainly an influence on the design of the Studebaker Zip Van (300K JPEG) in 1963. Studebaker sold over 4,000 of those to the Post Office before going out of business in 1964.

The forward control cab was dropped for the FJ-8 (3/4 ton) and FJ-9 (1 ton) postal vans built in the 1970s by Jeep's new government vehicle branch, AM General.

See The DJ-5 Dispatchers for information on other two-wheel drive postal Jeeps, and The Jeep "Economy Delivery" for a larger Willys delivery van.