Another "Sibling of the CJ-3B"

According to the New York Times of 21 June 2002, the Museum of Modern Art (MOMA) in New York recently purchased a 1952 Willys M38A1 for their permanent collection of significant vehicles, describing it as the best jeep ever built.

They didn't always have that opinion. Back in 1951 MOMA had an exhibition of what they considered to be eight examples of excellent automobile design -- Mercedes, Cisitalia, Bentley, Talbot, Jeep, Cord, MG, and Lincoln Continental -- and the Jeep in the exhibition (200K JPEG) was a flatfender 1951 M38. Shortly afterwards, the Director of Architecture and Design at MOMA was asked to comment on the newly designed M38A1, for an article in the Standard Fact Book of 1953 Cars, and was quoted as saying: "A typical case of styling -- and ugly styling at that -- ruining a good, clear example of machine art. It is the usual case of bloating used to make cars look bigger by adding unnecessary curves." 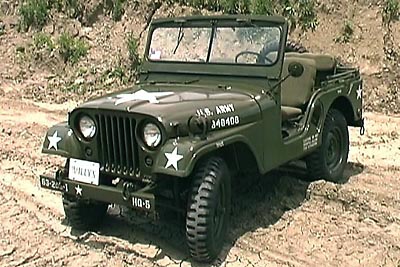 That new Jeep no longer appears bloated in 2002. But as the first significant styling change to the Jeep since World War II, it raised a few eyebrows fifty years ago. The new front-end styling was in fact a result of Willys' answer to the Army's request for a more powerful Jeep. The bodywork had to be changed to squeeze the larger F-head engine into a Universal Jeep for the first time.

The Willys model MD was the successor to its MC military version of the CJ-3A (50K JPEG). The MC had been dubbed the M38 by the U.S. military, and they considered the new MD to be an upgrade of the same vehicle, so it became the M38A1. 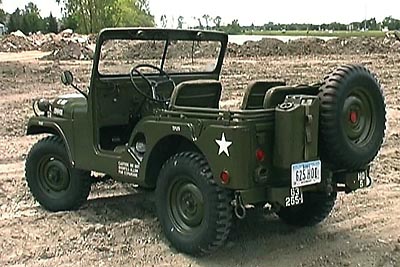 The example seen here, serial number 3576, was manufactured in January 1953 and was restored by Mike Peters of Oshkosh, Wisconsin. These 1952-53 models are considered the "early" version of the M38A1. Distinguishing features include the hinged front grille for easier engine and transmission removal, 8 thumb screws securing the cover of the cowl-mounted battery box, and a short front bumper. Other standard items on all the A1's include a heavy-duty frame, reverse front spring shackles, and 24-volt electrical system.

The Jeep Goes to War -- Again 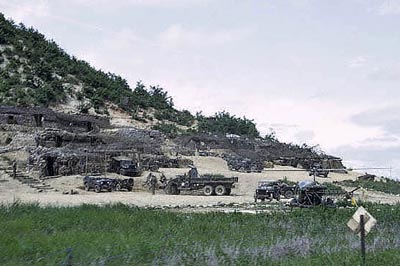 Many of the more than 50,000 A1's built in those first two years, went straight to the war in Korea, where large numbers of Willys MB's built during World War II and reconditioned in Japan, were still in service.

This 1953 photo from the battlefront in Korea shows vehicles including both an MB (right) and an MD (left), as well as a medical evacuation chopper in the right foreground. (Check out the larger copy, 70K JPEG). Freeman Bradford, who took the photo, comments that "the new, just-manufactured Jeeps seemed to have a tendency to not get past the rear supply areas. The old jeeps were tough, capable vehicles that got the job done on the rough, dirt/mud roads in Korea in 1952-1953. You could count on them working to get you where you were going -- and back."

The photo was taken at the 3rd Battalion Command Post of the 3rd Infantry, which was the immediate support for Outpost Harry, one of the most strategic and heavily-attacked U.S. positions of the war. It is part of a remarkable collection of recollections and photographs by members of the Outpost Harry Survivors Association. 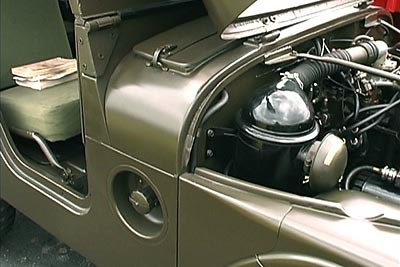 M38A1s built in 1954 and later can be identified by a simpler single strap holding the battery box cover. This photo of a 1954 M38A1 owned by John and Elaine Cheney of North Baltimore, Ohio, also shows the A1's distinctive external electrical connection on the cowl.

A shovel, mounted outside the body on earlier military Jeeps, is found under the hood of the A1 (60K JPEG). See also a photo of the interior of the Cheneys' restoration including radio, first aid kit and carbine (60K JPEG).

Total production of the M38A1 was over 100,000. Contracts with the U.S. Army ended in 1957, but the Marine Corps didn't place its last order until 1964, and production for export continued well after that. 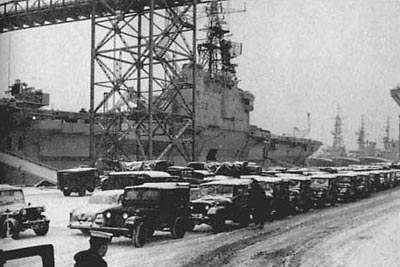 Canada has a strong connection with the M38A1. Over 1,000 of the original A1's were built by Ford in Canada in 1953 for delivery to the Canadian military, and designated M38A1 CDN.

By 1967 the Canadian Forces were still happy enough with their A1's to order 800 more (referred to as M38A1 CDN2) from the Kaiser Jeep plant in Windsor, Ontario. A group of Canadian A1's are seen here in Halifax in January 1970, awaiting transport overseas on the aircraft carrier Bonaventure. (DND Canada photo) 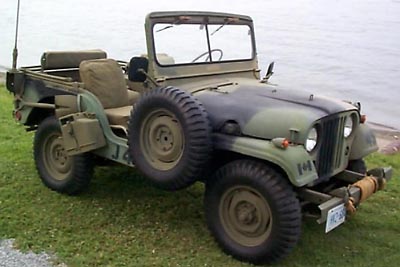 The CDN Jeeps were seen painted white (50K JPEG) in many spots around the world, as part of the Canadian contingent of United Nations peacekeeping operations. (See a Tonka Jeep repainted as a Canadian UN M38A1 on CJ3B.info.)

The biggest surprise in the story of the Canadian M38A1s was another batch of approximately 500, ordered in 1970-71. They were built in Toledo this time, since the Canadian factory had closed in 1969. The new M38A1 CDN3 (left) had updated features such as windshield washers, self-adjusting brakes, and M151-style air filter. Apparently many of the CDN2's were also upgraded to the same specs at that time.

Wayne Scott's 1970 M38A1 CDN3 (above) originally carried a mounted 106mm recoilless rifle, accounting for the spare tire moved from the rear to the side to provide clearance. See also a left side photo (40K JPEG) and rear view photo (40K JPEG) with the soft top in place.

This Jeep would have been delivered with a gap in the windshield, as seen on an unrestored example (40K JPEG) bought by Harold Folkestad. The gap would allow the barrel of the gun to rest horizontally, as in an illustration of a Skybow plastic model kit (40K JPEG) of the U.S. Army and Marines' recoilless rifle model known as the M38A1C. (The Skybow kit is surprisingly one of the few toy Jeeps based on the M38A1.) 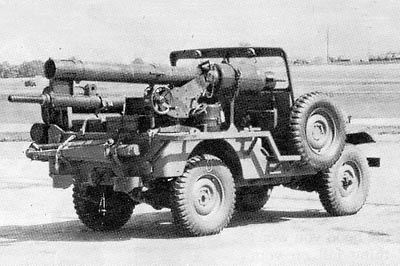 A limited-edition big brother to the M38A1C recoilless rifle version, was the M38A1D, equipped with the Davy Crockett tactical nuclear cannon. It saw only brief service with the U.S. military in the early 1960s, before somebody thought better of having Jeeps carrying nuclear weapons. (Photo from the Aberdeen Proving Ground.) 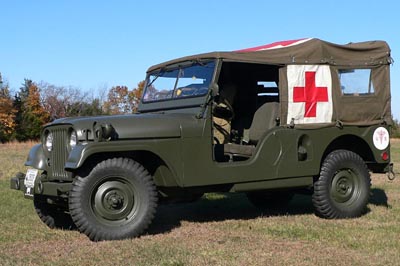 The other major variation based on the M38A1 was the long-wheelbase M170, used primarily as a front-line ambulance. Approximately 4,000 may have been built from 1954-64; see more details in Willys Military Ambulances on CJ3B.info. (Photo by Gary Keating.)

See also an M170 converted for use as a brushfire truck (90K JPEG) by the West Point Fire Department in Ohio. The spare tire on the M170 was moved to provide clearance for stretchers at the rear end, but instead of being mounted on the cowl it was put just inside an enlarged passenger door opening. (Photo by Bob Christy.)

So -- given that styling changes to Jeeps since the MD have been pretty minimal (except for the high-hood CJ-3B!) and that mechanical changes have been either compromises for civilian use, or incorporations of new non-Jeep technology -- perhaps you could indeed say at least that the M38A1 was the ultimate development of the original jeep design.

Refer to New Universal Jeep Designs, 1949-53 for a discussion of why the A1's new sheet metal did not appear on a civilian Jeep for another two years. Also on CJ3B.info see NEKAF M38A1 Jeeps in the Netherlands, and Elvis Presley's M38A1 in Germany.

Elsewhere on the web, see the M38A1 Restoration Site.