Development of the Willys
Jeep Surrey

The story of the original pink DJ-3A Jeeps at Las Brisas resort in Acapulco, is told in Surrey Gala Jeep Origins on CJ3B.info. But there's more to the story than Willys simply taking that idea and selling it to other resorts. The company was certainly aware of other experiments with pink vehicles and fringed tops. 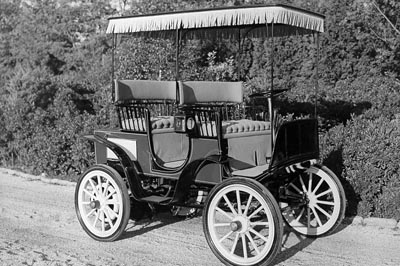 The concept of the "surrey with the fringe on top", made famous in the song from the 1943 musical Oklahoma, originated with the horse-drawn, flat-bottomed carriages built in the county of Surrey, England. They became popular in North America in the late 19th century, and by 1903 the idea was adapted to a horseless carriage in this "Electric Surrey" built by the Columbia Automobile Company in Hartford, Connecticut. 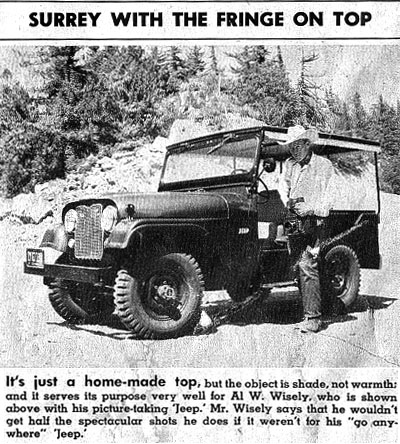 Perhaps the first documented example of a surrey-style Jeep was this CJ-5, featured in the corporate publication Willys News in February 1956. The caption doesn't record where owner Al Wiseley lived, but his hat and the spectacular scenery he was photographing suggest that it was in the western U.S.

Glenn Byron sent this clipping, and comments, "Here is proof that Willys had a surrey in mind long before they used it officially, at least 3 years before the Gala/Surrey introduction. Why it took them so long to get the product going is anybody's guess." 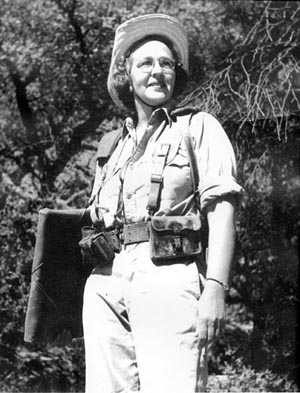 An even earlier Jeep with fringe attracted some attention in Arizona in 1948, but as far as we know there is no surviving photo. Geologist Beth Boyd of Prescott AZ told CJ3B.info the story of Dr. Medora Krieger (left) who started doing field work in central Arizona for the United States Geological Survey in 1947, a very unusual job for a woman at the time.

Medora Krieger drove her government-issued jeep (likely a war surplus MB) out from Reston, Virgina and at one point was pulled over by police, who assumed that the vehicle was stolen since it was being driven by a woman. Before her next Arizona field season, in 1948, Medora's colleagues decided to pull a prank on her and decorated the jeep with pink tassels and fringe, so that there would be no doubt it had been issued to a woman.

(Photo of Medora Krieger c. 1950, is courtesy of Katherine Pessin.) 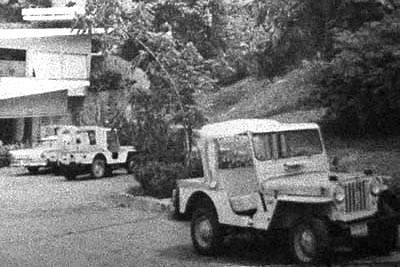 Eventually Louis Yocich of Willys Export told his boss in Toledo about the fleet of pink and white Dispatchers purchased by Las Brisas in Acapulco. Perhaps he took this photo, which Willys used in the 1959 advertising booklet Jeep Gala Rental Plan Guide. The color illustrations in that booklet were artist's sketches in various combinations of rose, yellow, white, pink and blue, so clearly the decisions about paint and fabric for the new model weren't made until the last minute. 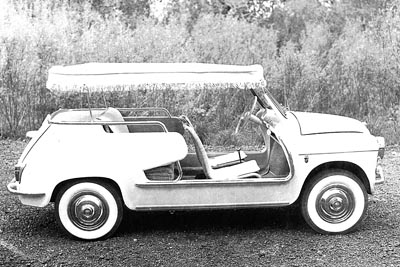 Even after Willys put the pink Jeep idea from Las Brisas together with whatever fringed Jeeps they had run across, they didn't rush into anything. Willys Engineering photographed this Fiat Jolly 600 on 20 May 1959 (on Orcas Island in Washington state, acccording to the caption.) Cool Beach Cars.com describes the West Coast popularity of the expensive little car, originally designed in 1957 to be carried on the yacht belonging to Gianni Agnelli, Chairman of Fiat. The "Jolly" at least convinced Willys that there could be a market for a whimsical, fringed vehicle, and may have influenced their choice of the name "Gala" for the new DJ-3A package. 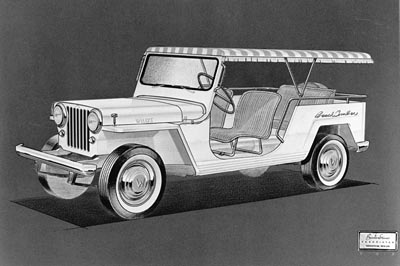 Not surprisingly, Willys got influential designer Brooks Stevens, whose previous work had included the Forward Control Jeep, to make some suggestions. His "Beach Comber" concept apparently dates from 1957, so it's not clear whether he had already seen the Fiat Jolly, but the seats, railings and low, wide door openings are certainly similar. 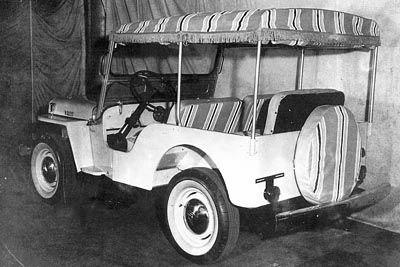 Willys experimented with several solid and two-tone paint schemes for their Gala, as well as different fabrics for the roof. It's unfortunate these factory photos are in black and white.

Coral Mist pink was apparently the number one choice; the caption on this photo reads, "Gala DJ-3A Coral and Gray Standard, 3/4 View, Curtains up. Willys Motors Engineering No. 15824-11, 2-18-59." In addition to three-tone striping on the fabric, this prototype has darker paint (gray?) on the windshield, black steering wheel and rear seat back, and small hubcaps. 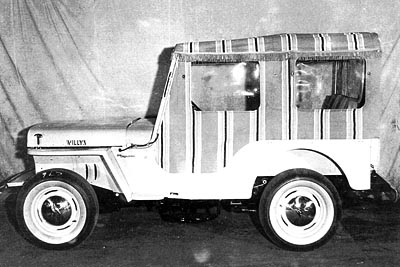 A side view of the "Coral and Gray Standard" was the next photo taken on the same day in February 1959, with side curtains installed which appear to be longer than the body. The darker windshield also seems to have been replaced with one painted the same pink as the body. Judging from the hubcap positions, the Jeep was not moved while those changes were made. 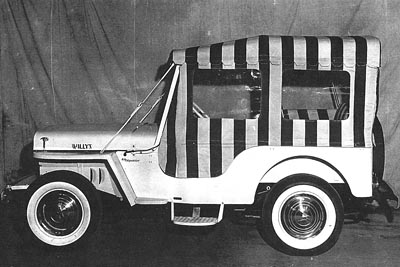 A photo labelled "Green and White Deluxe" shows that Willys wasn't even sure about the fringe; this roof has a sculpted edge on the fabric instead. It's hard to tell which parts of the paint and fabric were light green and which were white. This "deluxe" version has larger chrome hubcaps, windshield straps and painted steering wheel, but no grab handles on the windshield. The top support bows can be seen leaning forward at an angle. 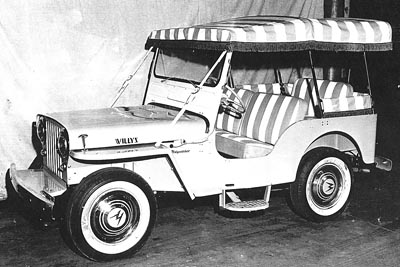 A "Turquoise and White Deluxe" version returns to a fringed top. The fabric stripes appear to be white, while the body looks like all one color. The hubcaps are painted, perhaps the same turquoise.

The top bows are the diagonal ones, screwed to the body rather than sitting in the standard bow pockets. This feature was eventually discarded, but did appear on an early production example photographed for a news story in Hawaii: "New Jeep Galas Bring Rosy Hue to Islands' U-Drive Car Business" (120K JPEG). 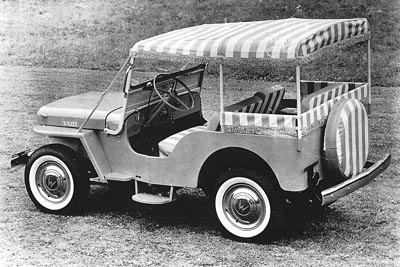 This is the final Tropical Rose/Coral Mist color scheme (but with darker rather than lighter steering wheel, and standard red paint on the hubcaps.) This a black and white print from the same photo shoot that produced the full color shots of all three final paint schemes (120K JPEG). Perhaps one day color prints of the prototypes above will also turn up. 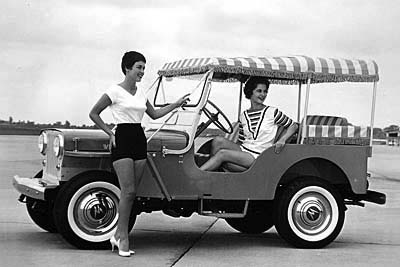 A black & white 8x10 glossy (130K JPEG) of models Jan Kalmbach and Ladonna Shanke, taken at the Toledo Municipal Airport but pretending to be at some tropical resort, was quite successful in generating press coverage. 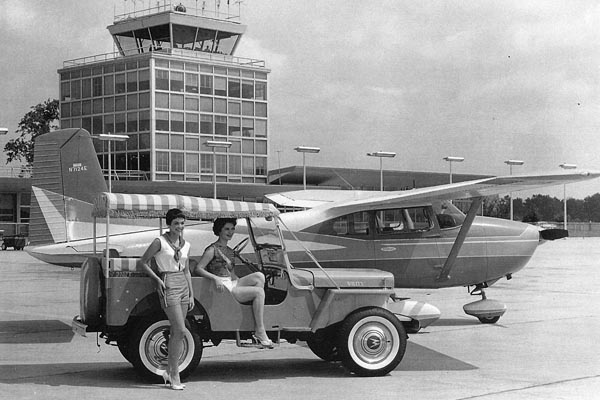 This pose is slightly different from the famous colorful Surrey postcard (290K JPEG). This angle is more effective in color than black and white, because the blue Cessna makes the pink Jeep stand out better, but photos to accompany press releases in the 1950s were still normally in black and white.

The Cessna 182 in the photo (N7124E) was also brand new, built in 1959. It was involved in an accident in Delaware OH in 1965, when a student pilot made a bounced landing and crashed into a parked aircraft causing substantial damage to it. As of 2012, it is still in service, currently registered to a company in Georgia. 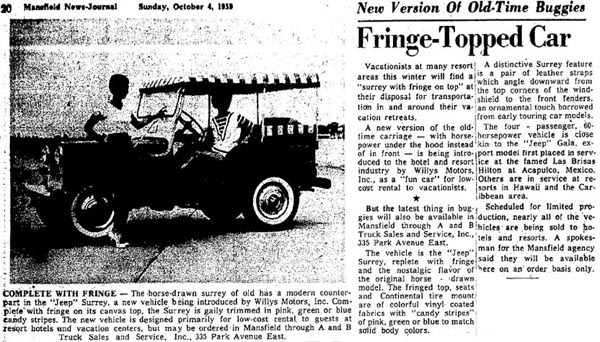 This example is from the Mansfield, Ohio News-Journal of 4 October 1959. See also the Toledo Blade of 16 September (100K JPEG).

Willys decided to use the name "Surrey" for domestic sales, probably wanting to capitalize on the familiarity of that old line, "surrey with the fringe on top."

Thanks to Colin Peabody, Bruce Agan, Ron Szymanski, Glenn Byron and Alden Jewell for many of these photos. Thanks to Bruce Duffie for the Columbia Electric Surrey photo. -- Derek Redmond