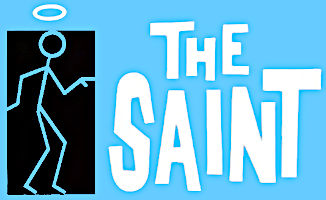 (plus some interesting Willys MBs)

The Saint was a British mystery thriller television series starring Roger Moore, which originally aired in the UK between 1962 and 1969, and the US between 1967 and 1969. It was based on the character Simon Templar, created by Leslie Charteris in novels written starting in the the 1920s. Roger Moore was reportedly offered the movie role of James Bond at least twice during the run of the series, but due to his television commitments had to turn it down until after The Saint ended its run. (Wikipedia)

Federico Cavedo spotted a Cerulean Blue DJ-3A Jeep Gala (known as a Jeep Surrey in the U.S.) in a 1967 episode of The Saint, and then I happened to notice that Jeeps pop up in a number of the episodes from that 1966-67 season. 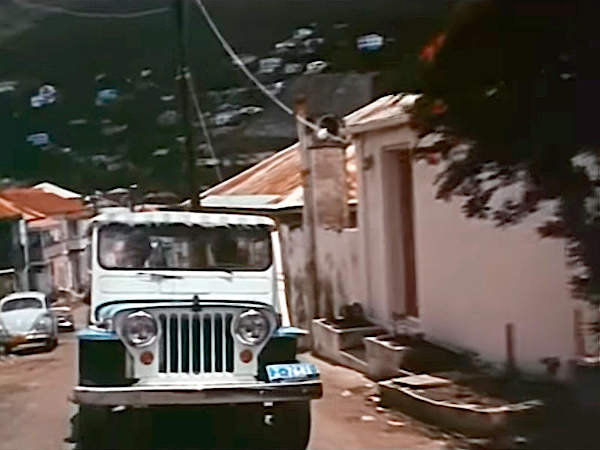 For this episode originally aired in the UK on 7 April 1967, Bamore Productions (owned by Robert S. Baker and Roger Moore) sent a camera crew to the Virgin Islands for some location footage including the blue and white Gala driving around with two figures representing Moore and guest star Sue Lloyd.

This shot was obviously taken on the same street in St. Thomas as the parade of Galas (40K JPEG) in the opening sequence of the 1962 film When the Girls Take Over. 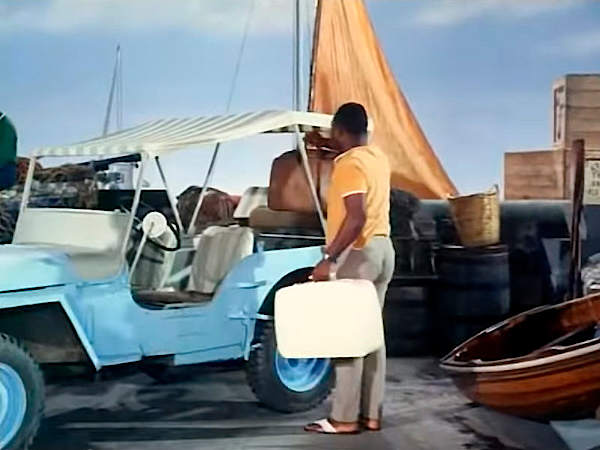 But like most episodes of the The Saint, this one was shot mainly at Elstree Studios near London. And in England in the 1960s, just about the only Jeeps to be found were the World War II surplus variety, so the props department had one painted to match the Gala rented in the Virgin Islands. They even made striped slipcovers for the backs of the seats. 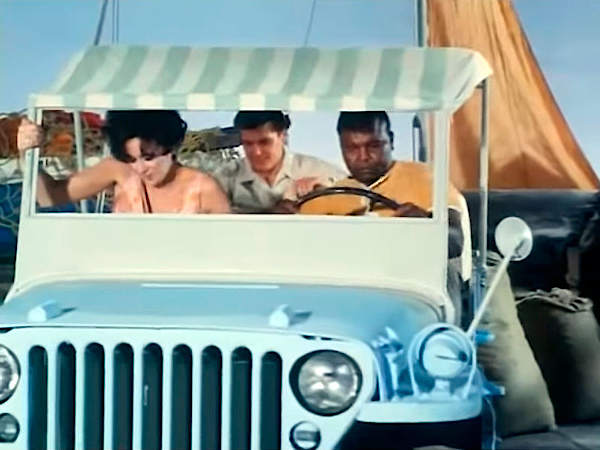 The painters, however, missed the fact that the radiator guard should be white, not blue.

Director Leslie Norman, who directed most of these 1967 episodes of the show, does the best job he can in integrating the studio scenes with the location footage. 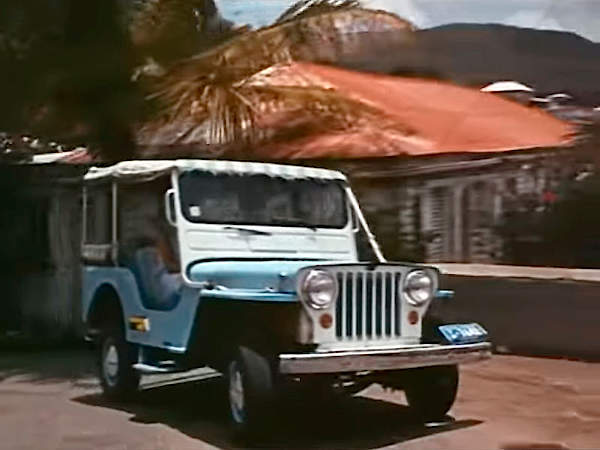 The plot involves Simon Templar flying to a Caribbean island to meet an old friend, who is promptly killed by a poison dart before he can reveal the details about a hidden fortune.

The Saint then teams up with a journalist to investigate a reclusive scientist working on a vaccine to make humanity immune to all disease. He naturally turns out to be connected to the hidden gold. 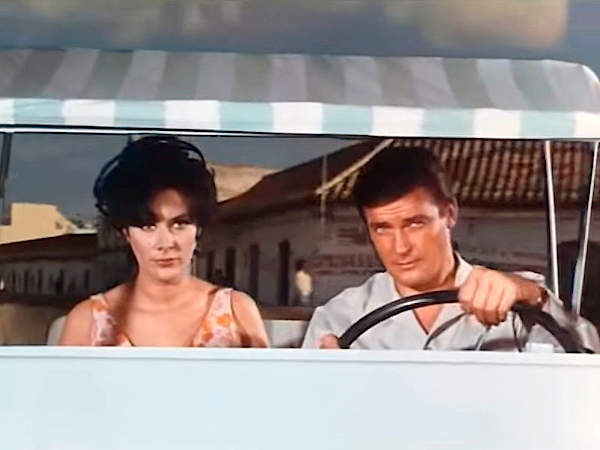 The close shots of Simon and the journalist Marla (Sue Lloyd) driving the Jeep, were done in the studio, with early blue screen technology. 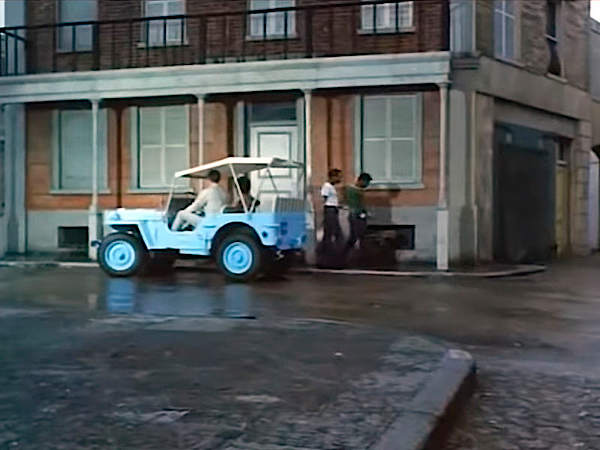 Before they find answers to their questions about the scientist and the gold, more people are killed, and Simon is almost done in by a poisonous snake planted in his room (which happened again to Roger Moore in Live and Let Die, his first of seven movies as James Bond.)

According to Burl Barer's book The Saint: A Complete History, original novelist Leslie Charteris did not like this script, written by Leigh Vance with a lot of similarities to Dr. No (1962). 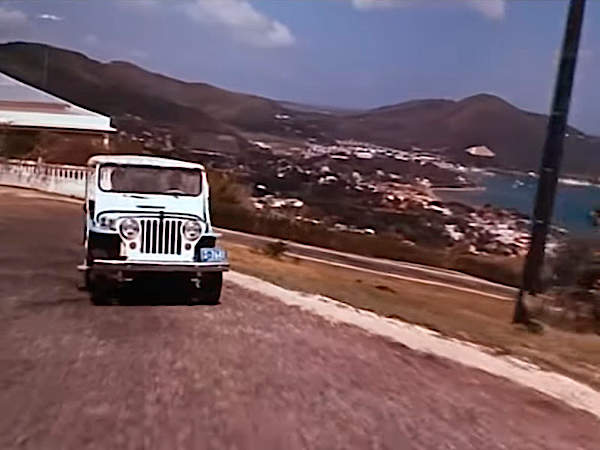 This shot of the real Jeep Gala, on Mafolie Hill overlooking St. Thomas in the Virgin Islands, recalls an almost identical shot (except for the number of Jeeps) in When the Girls Take Over from 1962. 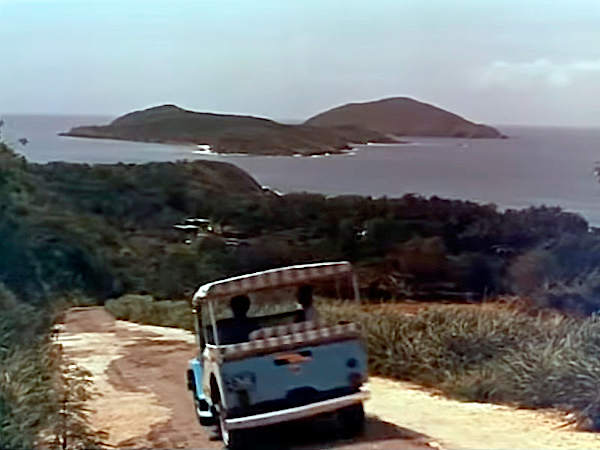 Our last look at the Gala in "Island of Chance" is when the not-very-convincing stand-ins drive it down to where The Saint believes the gold is hidden. 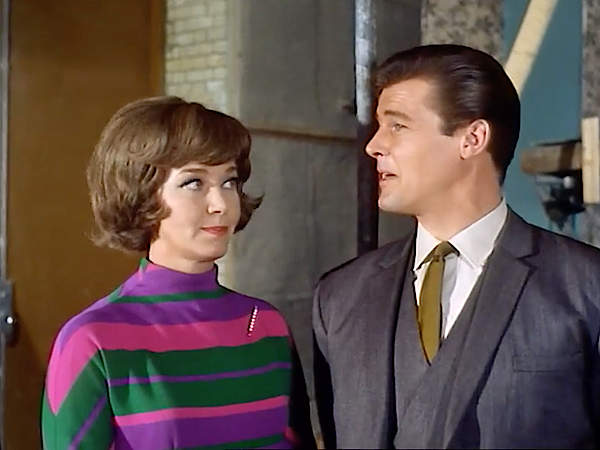 The previous episode of The Saint, 24 March 1967, had also featured a Jeep in a fairly central role in the story, set mainly at a movie studio in Rome.

And it guest-starred Lois Maxwell as Beth, a movie publicist. Maxwell had already been appearing as "Miss Moneypenny" in the James Bond films, and six years later she would be acting again with her longtime friend Roger Moore as 007, in Live and Let Die. 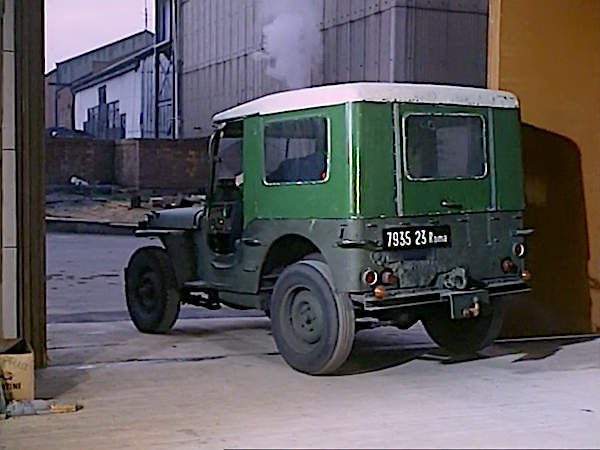 Our first look at this Jeep, as it backs into the film studio, reveals grab handles, tool indents below the door, and the lack of a tailgate, indicating a Willys MB with a steel hardtop added. 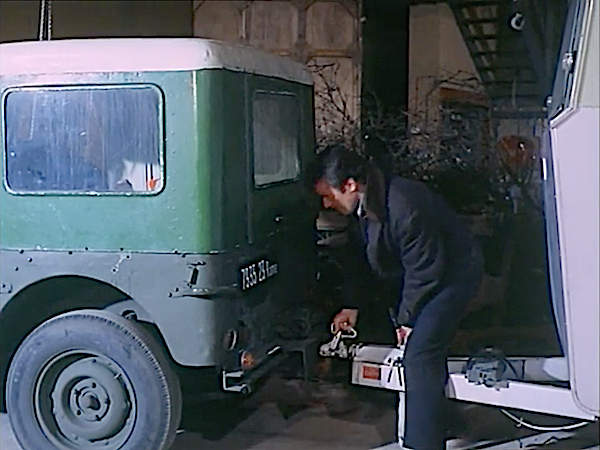 The plot revolves around temperamental movie star Serena Harris being kidnapped from the set of the production "Samson and Delilah." One gang member hitches the Jeep to Serena's dressing room trailer, then holds her at gunpoint inside. 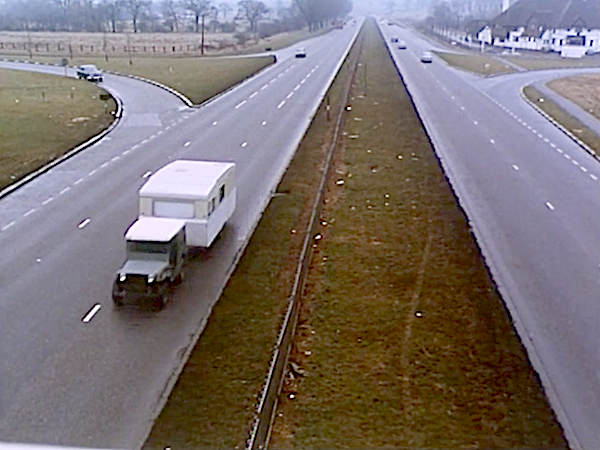 The kidnappers hit the motorway with the trailer, and in this shot we can see for the first time that the Willys has large civilian headlights. That's odd. Italy is known for weird headlights on the CJ-5, but not on an MB. 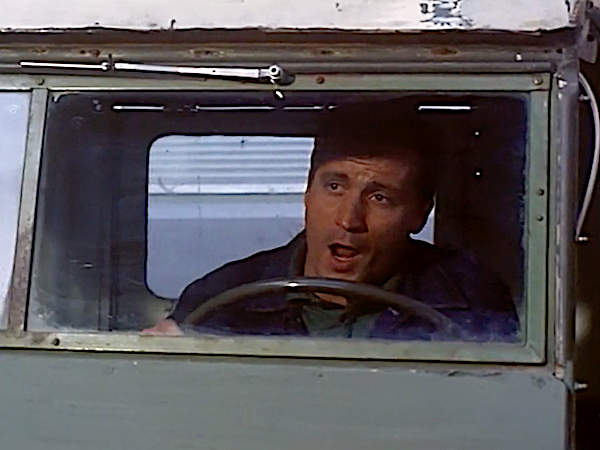 The getaway driver sings opera in Italian as he drives. No blue screen is necessary for the closeup -- the trailer fills the background, and somebody just bounces the Jeep around. 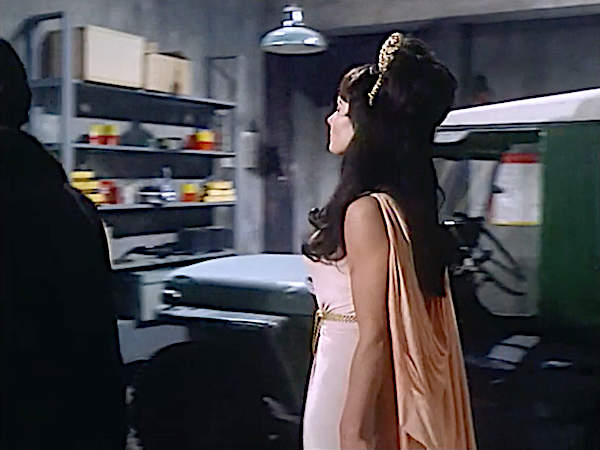 The gang locks Serena up in a room at their hideaway. The Saint manages to locate her, but also has to figure out whether the motive is the ransom money -- or is the whole scheme just a publicity stunt? 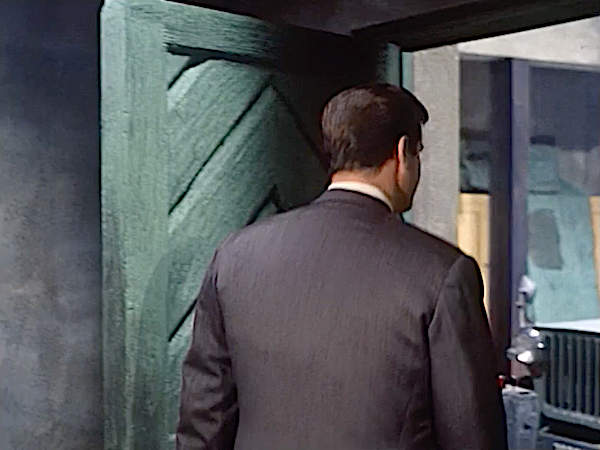 We eventually get a momentary glimpse of the front of the Willys, and in this freeze frame it becomes clear that somebody gave the MB a bug-eyed look by sticking big headlights on the front. One mystery solved, one to go. 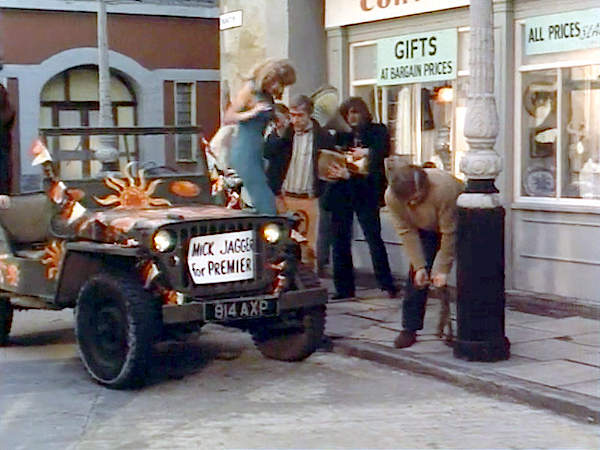 The episode from 19 May 1967 has a convoluted plot involving The Saint being framed for the mysterious murder of a popular young sculptor. There's also a jeepful of party-loving hippies who have an interesting method of locking their vehicle, with a chain around the lamp post. 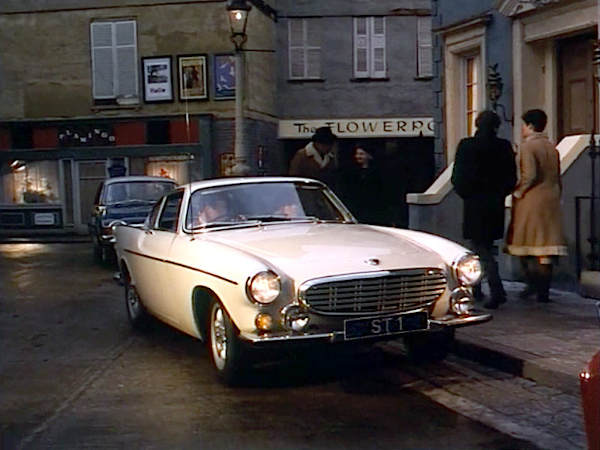 Reportedly the producers had asked Jaguar in 1962 to provide an XKE for Simon Templar to drive in their new show, but the company turned them down. (consumerguide.com)

Their next choice was the Volvo P1800, the Swedish firm's new sports car, and Roger Moore made it famous, with license plate ST1. 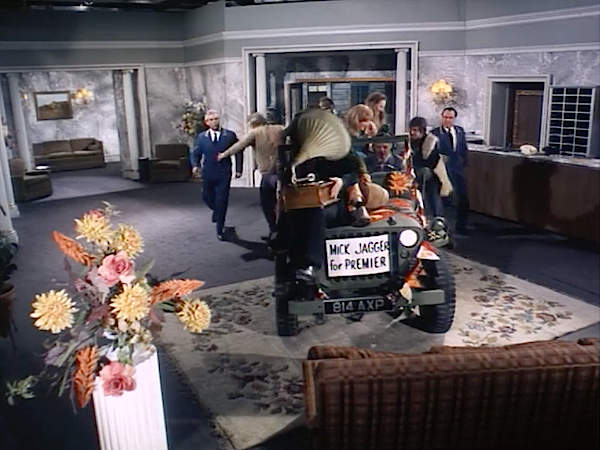 Simon later makes good use of the hippies and their MB, by driving it into an apartment lobby as a distraction.

The Saint generally had impressive exterior and interior sets built at Elstree Studios, but occasionally if you look closely you can see that the top of the set is visible. 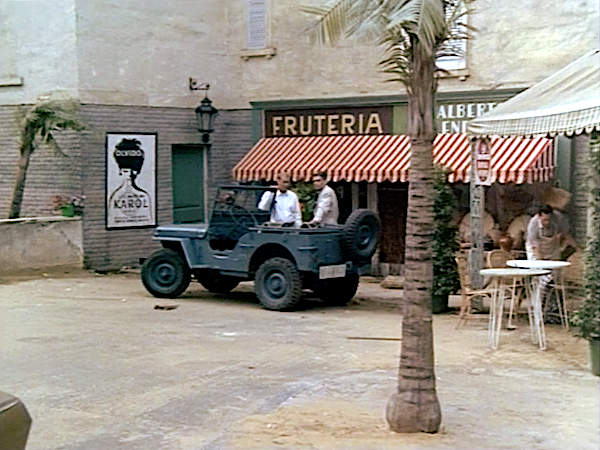 In the 16 December 1966 show, The Saint finds himself in Lima, Peru, and in the middle of an attempt by two men to kidnap Henry Coleman, a wealthy mine owner. He discovers that Coleman is a ruthless Nazi who fled to Peru after WWII, and the kidnappers are Israeli agents trying to bring him to justice.

The two characters here are Coleman's henchmen, stalking Simon in their Willys. 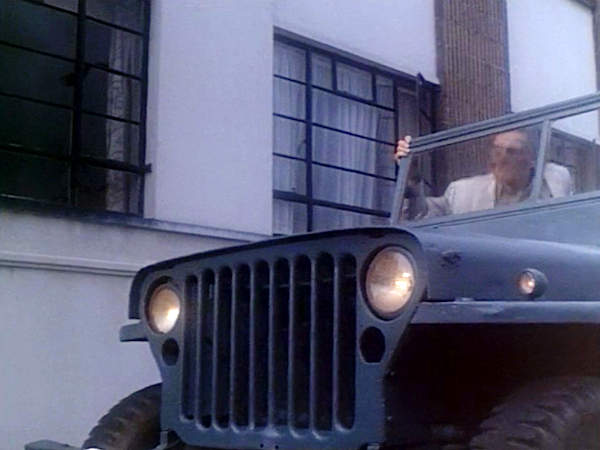 Surprisingly, all the MBs in these various episodes appear to actually be different vehicles.

This low angle is probably the most dramatic jeep shot of the season. It also makes the missing hood latch pretty obvious. 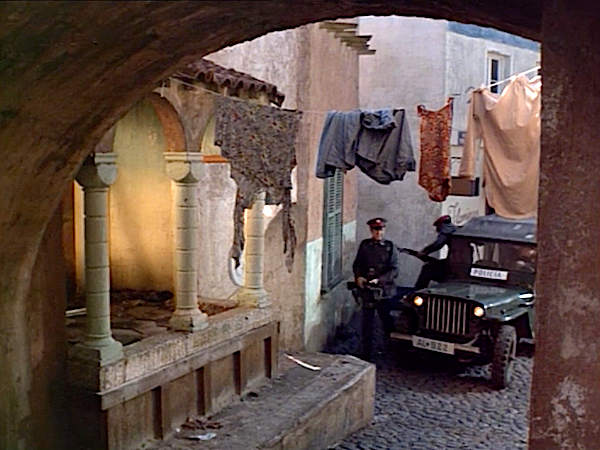 This action-filled episode which premiered early in the season, on 21 October 1966, includes tear gas, a firing squad, and a beautiful assassin.

Shortly after arriving in the fictional small Latin American country of San Pablo, Simon is drawn into a revolution against the corrupt president. This of course means the police are after him, and sometimes they show up in this MB. 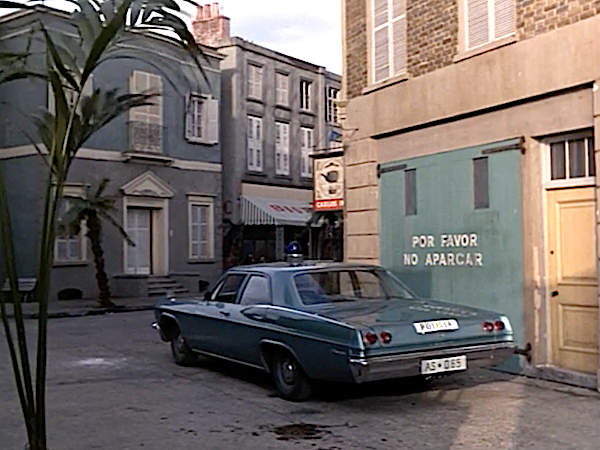 More often though, they are driving this 1965 Biscayne. And like cops everywhere, they don't have much respect for "No Parking" signs.

Thanks to Federico Cavedo for spotting the Gala in Episode 25. I have seen one brief appearance of a Willys MB in an early black & white episode of the The Saint, but that's the only one I know of other than all these Jeeps in Season 5. There must have been a Jeep lover in the props department that year. -- Derek Redmond

See more Surrey Jeeps in the Movies on CJ3B.info.