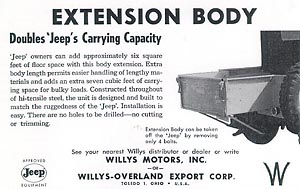 These add-on body extensions, designed to accept the Jeep's original taligate, ranged in length from about a foot to 30 inches (75cm). They were made by several manufacturers, including both Koenig and Newgren (who also made agricultural implements for Jeeps), and were available through Willys dealers.

See a larger copy of this catalogue picture (100K JPEG) from the late-1950s Jeep Specialized Vehicles and Equipment catalogue. 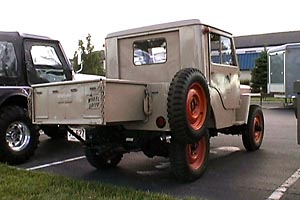 This 1946 CJ-2A with hardtop halfcab and rear body extension belongs to Don Dill of Ohio, and was on display at the 2002 Spring Midwest Willys Reunion in Toledo. See also a left side photo (30K JPEG) and a detailed low angle photo (50K JPEG) showing the supports for the extension, bolted to the drawbar. 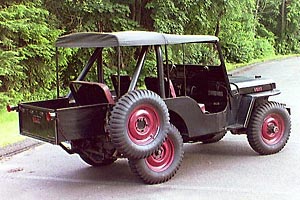 Gary Keating's CJ-3A has an extension box manufactured by Jones and Laughton -- the name is engraved along the edge of the tailgate area. Gary says he installed taillights on the box because the lights on the Jeep are pretty hard to see under there. 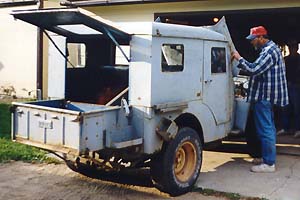 Dean Thiem found this 1953 CJ-3B which had spent most of its life in Arizona. See Story of a Long-Box Willys for photos of his rebuilding of the Jeep and the box. A brass plate on the extender says, "Body extender for Jeep made by Koenig Iron Works, Houston, Texas."

"We lived in Tucson, AZ during the early 1950s and our house was actually in the county rather than in the city limits. The Arizona Daily Star and the Tucson Citizen newspapers were delivered to each house by drivers in blue CJ-3B Jeeps with canvas half tops, open at the rear and no doors, and all of them had bed extenders for the load of papers. I remember well the sound of the Jeeps being revved and going through the gears as the drivers threw the papers into each yard at 'warp' speed. I waited every day to watch our guy come down the dirt street in his speeding Jeep and a cloud of dust. Those Jeeps would have been sold by Ed Galloway Motors on W. Drachman Street in Tucson. The dealership is still in operation by Mr. Galloway's step son, as Steve Christy Chrysler-Jeep, at a new location in east Tucson.

"At the time, my dad drove a '51 Willys 2WD station wagon that we had cometo Arizona in from Illinois, so Jeeps were already a way of life. I camehome from the hospital after I was born in England in 1944 in a MilitaryPolice Jeep. My dad was Provost Marshal for southern England at thetime. When he got out of the service in '46, he returned to Illinois andcouldn't buy a new car so he bought a new '46 CJ-2A from Clyde MartinMotors in Galesburg, IL and then later he bought the station wagon fromClyde Martin as well. To pay for the CJ-2A, Dad equipped it with fieldweights and on weekends, he plowed fields for the local farmers. Afterhe bought the station wagon, he sold Forney Arc welders out of it tolocal farmers in Illinois and also in Arizona after we moved here. Hetook the rear seats out and could put 4 to 6 new welders in boxes in theback." 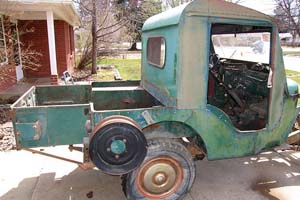 This 1953 Jeep being restored by Jason Duteil in Colorado, belonged to the Telluride Volunteer Fire Department, so the body extender may have been used as a hose bed.

The idea for a steel box that could be added to the rear of a Jeep to increase the cargo area, goes back at least to 1946, when Julius A. Negin amd Ludwig J. Gaspar Jr. applied for a patent on a "body attachment for Jeeps" (right). See their full set of drawings (20K GIF) which are on file at the United States Patent and Trademark Office. Patent No. 2,556,101 was finally granted to them in 1951, but it's not clear which if any of the commercially available versions were based directly on this design. 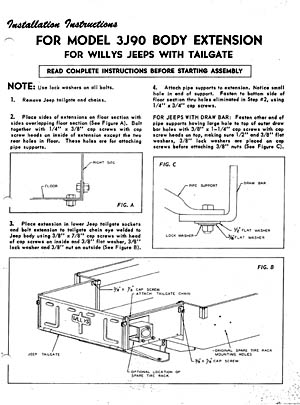 Koenig Iron Works of Houston TX continued producing their Model 3J90 extension at least into the 1960s. Here is their installation instruction sheet for "Willeys" Jeeps, courtesy of Karl Russell.

See a larger copy of Page 1 (100K JPG) showing the simple installation, and the new location for the spare tire mount. See also Page 2 (70K JPEG) for a parts list and for installation on a Jeep with no drawbar.

A post-1959 Koenig hardtop brochure (110K JPEG) includes a photo and description of their body extension on the back page. It states that the item is shipped with a primer coat.

See also a 1955 Price Bulletin (80K JPEG) from Kaiser-Willys of Canada, giving a suggested retail price of $45.86 for the Koenig Body Extension. 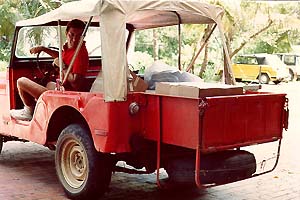 A photo taken by Tom Fredericks in St. Croix in 1985 shows a CJ-5 with a bed extension which is likely home made, including a different type of spare tire mount.