Here are some questions and answers from the CJ-3B Bulletin Board, dealing with the Husky or Warn overdrive units installed in some CJ-3Bs.

How to Use the OD 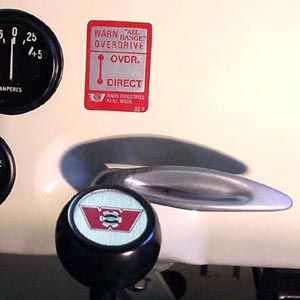 Mike: "I just bought a '62 CJ-3B that has three levers on the transfer case. I know about the standard two levers but was baffled about the third one. So I crawled under and low and behold, a Husky Overdrive. I've never seen one and don't know a thing about it. It was made in Colorado. It's mounted right to the back of the transfer case in line with the trans tail shaft. Any info would be greatly appreciated as I have no clue how to use it."

Steve Perialis: "The OD is not hard to use. The long third lever is used to change each gear to a higher speed (ratio). Example: Start in 1st gear, clutch in, push OD lever FORWARD, clutch out, then you will be in a higher speed 1st gear. Clutch in, shift into 2nd gear with the OD lever still FORWARD and you will be in the higher level 2nd gear. Need to down shift? Clutch in, pull OD lever BACK, and you will now be in normal 2nd gear. Many folks leave the OD in FORWARD position ALL the time in city and highway driving. Basically you now have a SIX-speed transmission."

How to remove an OD from a Dana 18 transfer case

Herm Tilford sent these important instructions on removing an OD without damaging it: 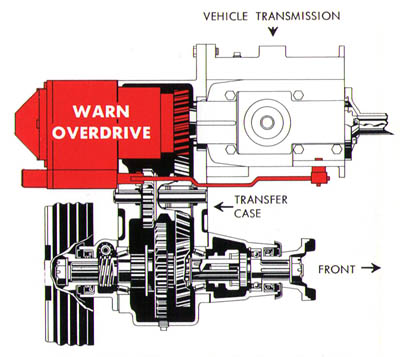 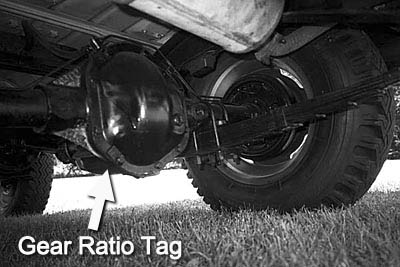 Oldtime commented on the effectiveness of an overdrive with different gear ratios in the axles. (See Axle Advice on CJ3B.info for more on gear ratios.)

"Here in the Ozarks we have a few steep grades along the interstate system. The standard 3B will be hard pressed to maintain 55 MPH when traveling up steep interstate grades at Wide Open Throttle (W.O.T.) The absolute best gearing for a 134-powered Willys is 5.38 FDR with 25% O.D. I also tested a strong running 3B with 4.88 FDR and 25% O.D. but the HP was insufficient. The 3B actually runs faster on flat to uphill grades with 5.38 and 25% O.D.

"The 4.27 FDR is only a compromise ratio for those without O.D. units.

"Note: the T90A transmission has a lower 1st and 2nd gear than does the T90C. Amounts to approximately 10% difference or just enough to notice it. The lowered 1st gear effects what I call the 'Start Off Ratio'. With T90 C its easier to 'Start Off' in second gear if performing a rolling stop. Rolling stops are usefull when you don't have a synchronized 'Start Off' gear."

Brian asked: "Will overdrives from early (1960s) CJ-5s fit a '61 3B? I know there are different spline counts, but is there any way of knowing what fits what without a tear down? There are two OD's for sale in my area and am trying to go the easiest/quickest route."

Hubbard's Halfcabs: "You need to match two things. They will all be 29 tooth ('56 on up), but you also need to make sure you get the right spline count. You need a 6 spline; the only CJ-5s that don't have a 6 spline output on their model 18 transfer cases are the ones with the V6 (T-14a three speed transmissions) which started in late '66, so obviously any CJ-5 before that will be a 29x6. The Warn tag will tell you the spline count or you can just look down the barrel of the overdrive and count the splines, 6 or 10. I'm about 95% sure there were no other transmissions behind the V6 in CJ-5s; can anyone else confirm this?"

William Barrow: "The spline count and tooth count you are looking for is indeed a 29 or 26-tooth gear with 6 splines. You will have to verify the tooth count for your transfer case. My 3B is a '54 model, which should have had the 26-tooth gear, but when I tore it down for a V6 swap (big mistake, don't do it if you haven't already) I found it to have a 29-tooth gear and the large hole t-case.

Evan: "Since you never know if your transmission has been swapped out the best thing to do is to physically get under the Jeep, remove the cover where the overdrive would go, and look in the back of the TC where the main gear is and count the teeth. That's what I had to do and found I need a 29-tooth OD on my 54 Willys."

Eric Lawson: "You can also measure the diameter of the cluster gear countershaft. It sticks out about 1/4-inch out of the middle of the back of the transfer case. When looking under the Jeep from the back end, this shaft is held in place with a metal tab. The metal tab is held in place with a bolt. If the countershaft measures 7/8 inch it means 27-tooth gear; 1-1/8" meands 26-tooth gear; 1-1/4" means 29-tooth gear. If you have a caliper, this will save you the 'enjoyment' of the smell of gear lube."

Steve: "Just got a line on a Husky OD unit that is going to be available soon. Supposed to be out of a Jeep, of unknown vintage, but the setup has the long trans input shaft on the T-90. I've been told that the long shaft is from an L-226 vehicle. My question is this: When was the changeover from the 26 to the 29-tooth transfer case made? Can gears simply be swapped out in the transfer case to make the 'wrong' OD unit work in the 'right' transfer case? Or is this more trouble than it is worth? Any help at all would be appreciated."

Karl Russell: "I don't know the date for the 26 to 29-tooth change at the factory. The info used to be posted at the Advance Adapters website, but it doesn't include the serial numbers anymore. It is possible the transfer case has been swapped around in the meantime anyway, so it is not ironclad. You can swap the gear sets between a 26 and 29-tooth transfer case. It would have to be all the gears, not just the adjacent intermediate gear. Rebuilding the T18 transfer case is not hard, but "a quicker method would be to swap the overdrive planetary assembly for one with the correct tooth count. Contact Herm Tilford at Herm The Overdrive Guy. Herm is about the only source I know of for Husky OD parts. He can be a bit hard to reach, so leave a message and don't be alarmed if it takes a few days to hear back from him. I'll vouch he is one of the nicest guys you'll ever meet in this hobby and he could probably set you up with the planetary you'd need. His prices are very reasonable."

Dave: "Yes, in 1955 the transfer cases were changed to the 1-1/4" shaft, and the tooth count changed. But don't go by that because the gear sets are interchangeable between the 1-1/8" and 1-1/4" cases. You should always count the teeth on the transfer case input gear if you are not sure."

Herm Tilford: "All that is necessary to convert the 26 to a 29 tooth overdrive is to replace the barrel gear in either a Husky or a Warn overdrive. I have many of the parts for both units (Herm The Overdrive Guy)."

Jim: "I just purchased a Warn Overdrive still attached to a model 18 transfer case with the T90 transmission shaft sticking out. I took the 5 bolts out of the OD and removed the unit, then took the square snap ring off. The cluster gear still seems tight to the end of the transmission shaft and I don't want to force anything without advice."

Dave: "After you remove the snap ring inside there is a locking tab that needs to be removed. A magnet will pull it out. Then you will see a star shape in the center; this is a locknut you need to remove. A 1/2" extension works perfectly. You are probably going to have to put the shaft in a vice to hold it because that nut is usually pretty tight (110 ft lbs.) After you get that nut off, your shaft should slide right out." 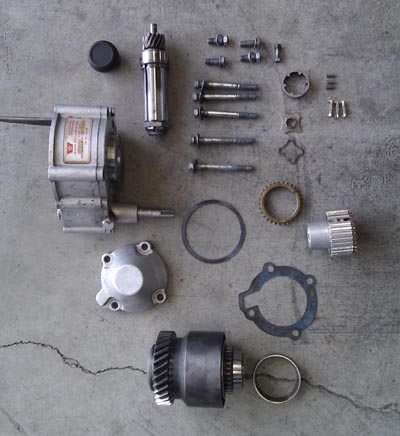 "There are two screws or two roll pins that are attached on the gear side that need to be removed carefully, and a large snap ring on the other side. Then take the two parts apart and look at the surfaces and see if there is any side play to the spyder gears. If all looks good then replacing the bearings and o-rings and gaskets would be a good idea.

"I sadly keep getting OD's for repair that are heavily damaged and the buyer got stuck with it because he didn't know what to look for. The worst was a "rebuilt" OD that was nothing more than washed in a solvent tank and was damaged badly and was the wrong spline count and the buyer had no recourse.

"If you don't know, ask someone. If a seller tells you that something has been rebuilt, ask him what he did and what the condition of the gears was. Ask whether he does this a lot, or is this the first one that he has done. Just ask questions to see if this person is informed. Be careful. And if I was buying something expensive I would talk to the person on the phone rather than the Internet."

Thanks to all the contributors, and Jaime Gomis and John Hubbard for photos. -- Derek Redmond

Elsewhere on the web, see the Warn Overdrive Manual on the Willys Jeep Trucks website, and Herm The Overdrive Guy.