Pinto Turbo in a CJ-3B 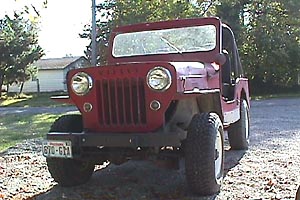 Once the F-head in my '53 3B blew, I knew that it was time to modify the old girl. Of course I wanted more power, I just didn't have the money to do a V8 conversion. What with all of the drivetrain upgrades that would be needed, I'd have to completely rebuild the Jeep from the ground up.

That's when my brother suggested a Ford Pinto motor. I have a friend in California with a Pinto-powered M38A1, and parts are easy to find, so I thought "Why not?" Then one day while talking cars with an old guy at the local watering hole, I mentioned that I was thinking of the Pinto conversion for my Jeep, and he says there is an engine at his shop just a couple of blocks away, and to come over the next Saturday and check it out.

Well, when I got there I found a 2.0L Pinto motor with a turbocharger attached to it. The owner said it ran real strong but probably needed a ring job because it smoked a little. Needless to say, I was sold on it -- small, but with POWER. 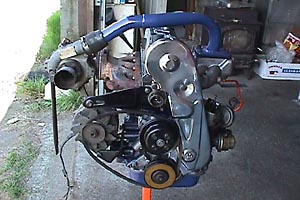 I took the motor home, put it on a stand, and proceeded to take it apart. After removing the head I discovered some major scarring in the number 3 cylinder (broken ring), and knew that a trip to the motor rebuilder was in order. Instead of rebuilding that block, I opted to call it a core and purchased a short-block bored 0.030.

The cylinder head was taken to the guys at Progressive Automotive and they performed their Stage-3 headwork to it. A Delta Camshafts r.v. cam was installed at that time as well. The owner of Progressive Automotive estimated that the machine work that they had done on the cylinder head normally fetched between 185-200 horsepower, but with the addition of the turbocharger I should expect between 250-280 horsepower (the boost rate of the turbo is still unknown). 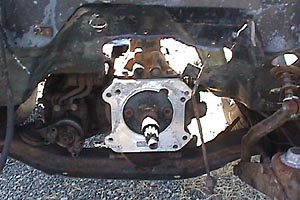 I searched all of the adapter manufacturers for the elusive Pinto adapter, only to find that nobody was making them anymore. I talked with Eric at Novak adapters, and he was nice enough to send me pictures of the adapters that they used to manufacture. Armed with those pictures and the Internet, I eventually found an adapter in North Dakota. Since that time, Eric has told me that due to popular demand, Novak Adapters are going to re-introduce the adapter kit. This is the adapter bolted to the T90. 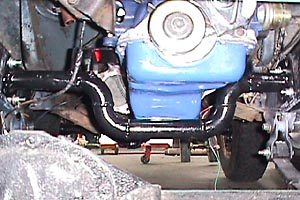 Bolting the engine and bellhousing to the T90 transmission was relatively simple. Attaching the motor to the frame was my next obstacle. I had to manufacture motor mounts. We call this a Vega mount, in reference to the old 70's-era V8 Vega. I used 1-1/2" weldable steamer fittings for the corners, and 1-1/2" black pipe. The whole assembly is bolted to the frame with 7/16" bolts. 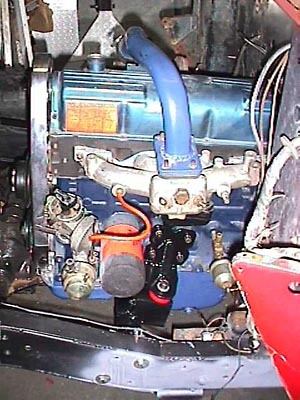 The tabs were bolted to the engine, the Vega-mount was bolted to the frame, and then the motor-mounts were fitted and tack welded in place. After a few minor adjustments the finish welds were performed, and the final installation was complete.

This is the left side of the engine. See also a closer view of the right side motor mount (80K JPEG). The clutch linkage had to be modified slightly to work with the Pinto clutch assembly, but nothing major. The throttle linkage had to be changed of course, so now I'm in the process of installing a swing pedal system. 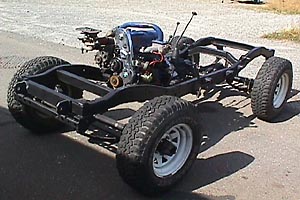 While the frame was exposed I decided it was time to make those necessary modifications and reinforcements. First was a shackle reversal. I also opted to use a Rancho 2-1/2" lift, and CJ-5 springs in the front. Using the CJ-5 springs moved the front axle forward approximately an inch. See a photo of the front springs (50K JPEG). The top and bottom frame-rails were strapped with 3/16 x 1-1/2" steel, welded in 4 to 6-inch beads that alternated left-right-top-bottom. This welding pattern kept the frame straight. 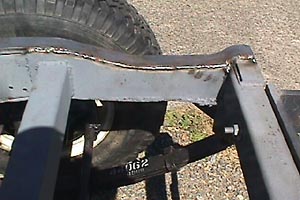 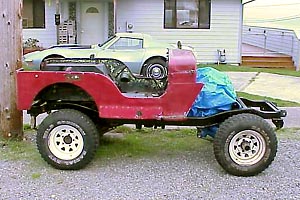 Next was the manufacturing of a body lift. Not being a fan of puck-lifts, I built a sub-frame out of 2" box tubing. See a close photo of the body lift (70K JPEG).

The 36" Swampers should fit now.

At about the point that the motor was installed I happened upon the ever-popular "parts Jeep." Now the old girl has a flanged D44 rear and an open-knuckle D30 front, and Saginaw steering. If only the tub were in as good shape as the rest of her. Soon...

Thanks to Tom for his great photos and description of the project. -- Derek Redmond