The Coca-Cola Company was founded in 1886, and is the world's leading manufacturer, marketer, and distributor of nonalcoholic beverage concentrates and syrups, used to produce more than 300 beverage brands. The corporate headquarters are in Atlanta, with local operations in over 200 countries around the world. This may be older and more popular than the Jeep! However, even the Coca-Cola Company has a Jeep (toy) on its web pages! (Go to the "Games & Toys" section at the Coca-Cola Store.) 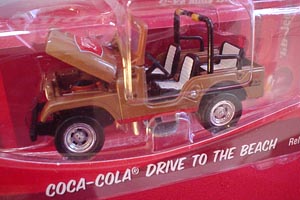 Johnny Lightning included a version of its excellent CJ-5 model in a series of Coca-Cola licenced vehicles in 2006. The Jeep is in an unusual bronze finish with the slogan "Coke adds life to summer" in very small text.

See also the elaborate "Have a Coke and a smile" packaging (120K JPEG). 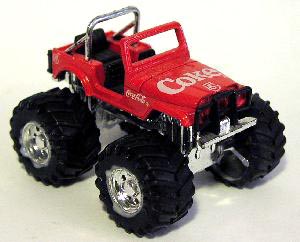 This is a Coke CJ-7 with large lifted tires from Hartoy. It is 2-3/4 inches long, made in China by Hartoy Inc., 1988. The hood opens to revel a red engine, and the grille is slatted although it is not easily visible through the grille guard. 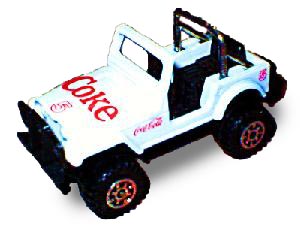 The Hartoy casting also came in white with regular tires, in the "4x4 Power" series, made in China and dated 1988. It has a slatted grille and the number '5' on the hood and rear quarter panels just like the red lifted version. 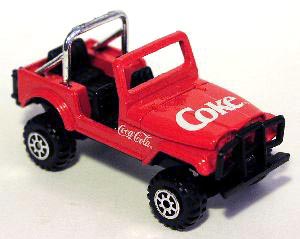 A very similar casting but with a crosshatched grille and small tires, was released by Edocar (see the two red Jeeps side by side, 30K JPEG.)

This Edocar Jeep was part of a Coke playset (50K JPEG.) 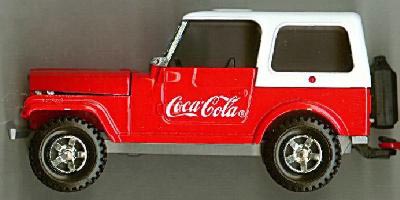 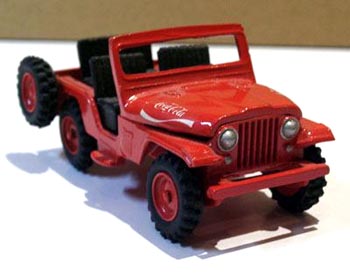 This Minimac 1:43 scale CJ-5 made in Brazil by Minibrindes in the 1980's, is one of the most unusual of these Coke Jeeps. It has the distinctive squared-off rear wheel opening of the Brazilian CJ-5, manufactured from 1967 to 1983 by Ford of Brazil. A left rear view (50K JPEG) provides a good look at the casting details and the Coca-Cola logo. See Latin American Jeep Toys for more versions of the Minibrindes CJ-5. 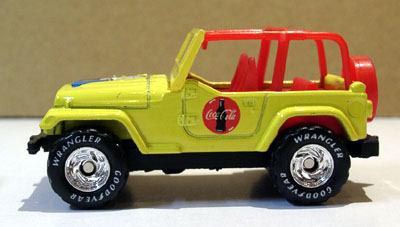 Matchbox has released a couple of Coke versions of its new TJ casting. This yellow Coke 1998 TJ with Goodyear rubber tires appeared in 2000, part of a Collectibles series of Coke vehicles. See the rear view with the tire cover (20K JPEG) and the original packaging display (40K JPEG.) 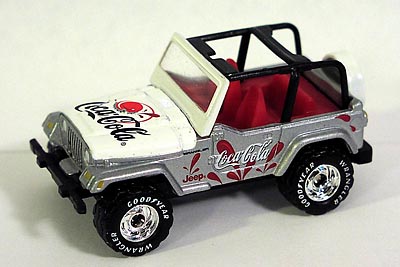 This Coke Wrangler was issued in 2002, a silver and white TJ with "Coca-Cola" graphics and also Goodyear rubber tires. It was part of the Matchbox 50th Anniversary Collectibles series of Coke vehicles. See a rear view (70K JPEG) and the original display (35K JPEG.) 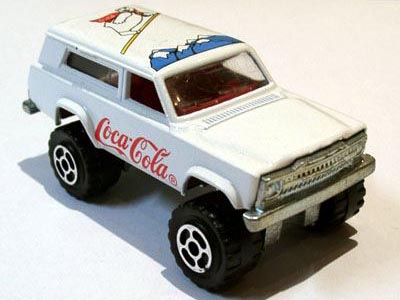 Majorette had an early Coke Jeep based on its SJ Cherokee casting. This had the traditional Coca-Cola snow bear graphics. It is a later-style "no dog" version of the 1:64 #236 casting with the "Made in..." stamped area on the base blanked out (see Majorette Diecast Cherokees on CJ3B.info.) 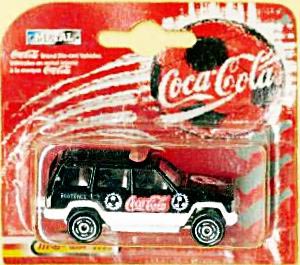 The excellent and long-lived Majorette XJ Cherokee casting was recently issued in the European market as a Coke Soccer Jeep. The full "Coca-Cola" name is now found more often than the short form "Coke," and possibly is the only version of the name currently being licenced. 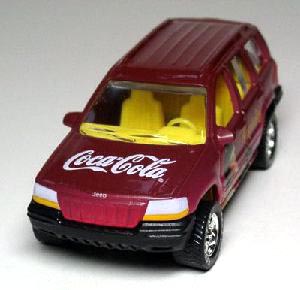 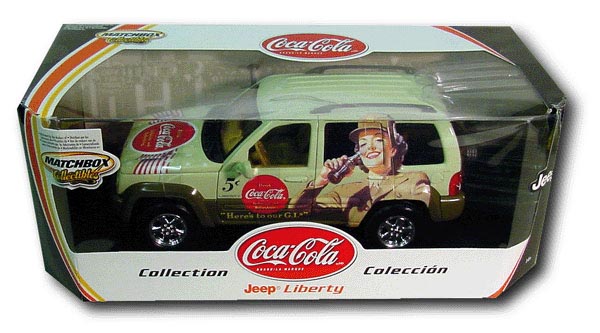 A 2003 adition to the Coke Collectibles series is a light green Jeep Liberty with deluxe graphics applied. 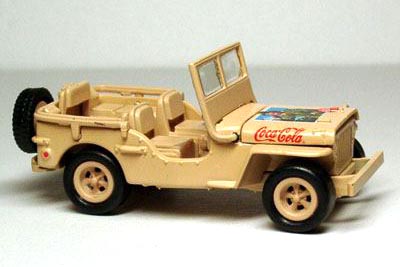 Strangely enough, the 2003 Johnny Lightning (Playing Mantis) Willys MB, #12 in the "Coca-Cola Calendar Girl" series, features the same illustration seen on the MBX Liberty above. The source of the picture is seen on the original packaging (30K JPEG) -- a reproduction of a WWII-era calendar. 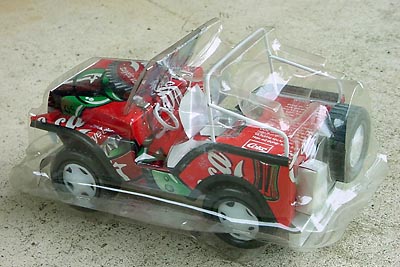 Perhaps the ultimate Coke toy Jeep: Ed Wilson photographed this model apparently made in Vietnam. The body is cut from Coke cans with a "tab and slot" construction; the windshield is soldered on. Wheel wells and the rear portion of the tub have split plastic tubing over the edges. The tires and wheels are molded plastic on push-on metal axles, and the steering wheel is fashioned from coated wire.

The large number of Coca-Cola memorabilia collectors has made Coke toys a popular merchandising connection. After an MB, what's next in Coke Jeep Toys? -- Mike Albright

Thanks to Toshimi Ohashi for pictures from his Diecast Models Collection. -- Derek Redmond