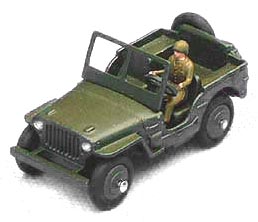 While researching these articles, I frequently found myself imagining how I would respond if someone less appreciative of diecast collecting should ask how it is possible that I, a grown man of senior age, should spend valuable time, energy and money on toys. In my defense I imagined I would probably bluster and try to say something witty to bring humor into the situation, like, "It's the child in me who has not outgrown his Dinkys!" After my initial embarrassment had worn off, I would then say, "Do you have a hobby that greatly interests you?" If I found that we could engage one another on even ground, I would explain that I have a small specialist collection of early diecast jeeps of Dinky manufacture. I would try to make my accuser a bit incredulous by impressing that these toys are not made anymore, and in good condition they can command high prices. Some in my collection are more than 60 years old. They represent an era that has gone for good, and afford great pleasure in bringing back memories of a childhood long elapsed. And then there is the story behind these "toys", which as a matter of certain fact are toys no more...

While production of Dinky toys proceeded at the plant in Binns Road, England, a branch of that firm also established itself in Bobigny, on the outskirts of Paris, France. In 1946 it became the alternative location where Dinky jeep toys were produced; c'est une fabrication Meccano. Copying the idea of the British Meccano committee who modeled the famous wartime Willys MB and its look-alike, the Ford GPW, the French tooled up for the toy jeep which was also to be the first French post-war Dinky issue. The British firm introduced their 153A during 1946 to 1948, while at the same time the French introduced their model 24M in slightly larger scale. 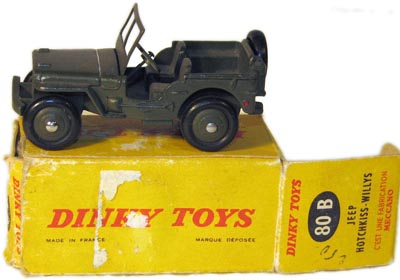 The first French model of the jeep in similar scale to the 153A, the 80B (right) only arrived in 1958. The French plant shut down by 1972, while the British operation struggled on until 1980.

I first saw a French Dinky Jeep militaire Willys "in the flesh" while visiting Bazil Kriel, of Bloemfontein, South Africa, and viewing his splendid collection of military diecasts. There I came to understand the subtle differences between the British and French modeled versions in 1:48 scale, of the famous American army jeep.

Immediately apparent was that the British model 153A had a very slightly raised bonnet centre, while that of the French 80B was about as flat as a tabletop. And tabletop it was designed to be in the real thing, as its spaciousness became a boon to army officers planning their next strategic move and wanting to spread out their maps on its ample surface for careful study. Why exactly the Willys MB is more accurately modeled by the French Dinkys in this respect is still open to argument.

When I, continually hampered by my meager budget, at last got hold of my own French Dinky jeep identical to the 80B, but with driver figure nicely modeled in plastic, I was elated. Finally I was able to compare my early British 153A, produced in 1947, with this, its French counterpart. What initially might appear to the unaccustomed eye to be two identical toy jeeps, soon proved quite different in more than a few respects, although some differences are subtle indeed.

In table form, the differing features can be compared with one another as follows:

The fact that there are differences in the number and positioning of the ejector marks assist in confirming that the two models are different castings altogether.

There is a basic fact that I have read many times, that in the evolution of Dinky tyres, patterned ones are later in the chain than smooth ones. I was on the point of reporting that the early French model 80B/BP indeed has smooth tyres, when I finally just managed to discern that the tyres are very lightly patterned. This indistinct patterning must be noted; it's not as if some French youngster had put mileage on them by covering vast distances with his toy (!), but they simply were produced less deeply patterned. Later French Dinky jeeps came out with strongly patterned tyres. To confuse matters, children during play would soon "change tyres", and bigger youngsters would try to enhance their models by fitting patterned tyres in lieu of smooth ones; but it should be of worth to the serious collector to know which types of tyres the models originally came out with.

There were a number of French jeep models brought out by the Bobigny plant:

The three jeep models acting as platforms for the missile launcher, recoilless gun and wrecker equipment are all the same in appearance, differing from the preceding 80B/BP models only in their concave wheels, folding windscreen and hefty trailer hitch. Only the wrecker model is painted a color (red) differing from the army green/olive drab the others are decked with.

For a time (up to 1959) both the British and French plants used the original catalogue numbering system of one, two and three digits followed in most cases by a letter, as in the designation 153A (British) and 80B (French). French Dinky Toys changed to an all-numeral system during 1959, and the 800 numbers were reserved for, amongst others, the French military vehicle models. Eventually the numbering system crumpled under the weight of success and 4-digit numbering came in, as in the wrecker jeep. 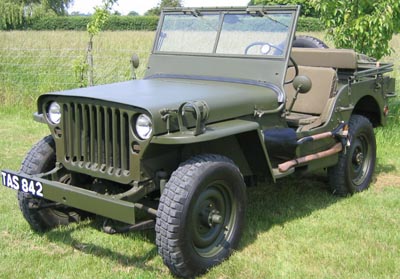 In 1956 the French firm of Hotchkiss began manufacturing M201 jeeps under license. Nearly 28 000 units based on the Willys MB design were produced for the French government between 1957 and 1966. They were built from the same plans and with the same tools as the Willys MB, so there is very great similarity indeed. The American Army jeep was fitted with tyres having a non-directional military tread pattern, also called bar grip pattern, and the Hotchkiss was fitted likewise, but later the pattern was changed to a brick tread pattern, as shown in the photo.

Photographic evidence shows that most Hotchkiss jeeps served in standard form, but some were indeed used as weapons carriers.

As the model 828 demonstrates, one of the weapons was a missile launcher. The first French army jeeps to carry an anti-tank system were fitted with the wire-guided Aérospatiale SS10 surface-to-surface missile from about 1963. (See diagram.)

In flight, the 15 kg missiles are steered with the help of guidance wires from the operator's station. Guiding a missile to its target was very demanding and required a high level of skill and concentration. The 5 kg warhead detonates on impact. Use of the SS10 was phased out in that same year, 1963, so jeeps carrying the SS10 were soon refitted with improved missiles. 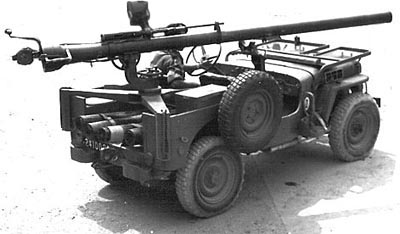 The model 829 is representative of an M201 sporting an M-40 recoilless rifle of 106 mm caliber, with barrel 3-1/2 meters long and a base nearly 2 meters wide. The jeep's rear panel was cut out and the body tub strengthened at several points, to accommodate the additional weight and stress of firing the weapon. Also, the spare wheel and jerry can were moved to the side. These modifications, however, are not to be seen in either of the weapon-carrying Dinky jeep models.

The principle of the M-40 recoilless rifle is quite simple. The artillery type shell has a rifled band, which fits in the rifled barrel of the gun. This causes the shell to spin upon firing, ensuring good stability in flight. The case is perforated so that, while some of the gas pressure forces the shell forwards, some of the pressure exits through the rear of the breech. Not all of the charge is therefore used to propel the shell forwards, and some, escaping backwards, lessens the recoil considerably. The side effect, however, is that both the velocity and range of the weapon is rather less than that of a conventional gun.


Wrecker conversions of war surplus Hotchkiss jeeps, as represented by the model 1412, were common in France, as were firefighting conversions (see WWII Jeeps as Fire Engines on CJ3B.info.)

Coming to the conclusion of my latest quest for information about these wheeled antiques both miniature and actual, I find that I have once again fueled my enthusiasm and heightened my enjoyment as a collector of Dinky jeep toys. I hope our readers, be they collectors of toys or of actual militaria, will share this enjoyment as they read here.

My two grandsons have left with their parents who are now working overseas, and so I have since welcomed a young neighborhood friend or two to visit and view my existing jeeps and now also this French newcomer. But it is a "look & listen" agreement: no playing with these venerable oldies!

Thanks to Johan for this detailed examination of the third major group of Dinky Toy Jeeps. Thanks to Ron Cobb for the M201 photo, Andy's Military Jeep Pages for the M-40 photo, and Hotchkiss M201 for the SS10 drawing. -- Derek Redmond

Return to the index of the Toy Jeeps Pages.