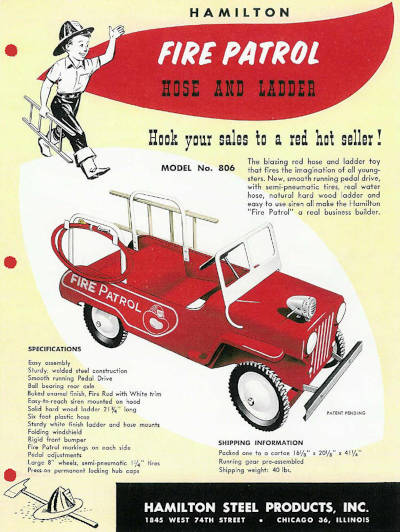 This full-page ad for the Fire Patrol pedal Jeep from Hamilton encourages retailers to "Hook your sales to a red-hot seller!" Dimensions of the body are given as approximately 20x41" (51x104cm) with a weight of 40 pounds (18kg).

Like most of the other brands, Hamilton did not advertise their fire truck as a Jeep, possibly trying to avoid issues with licensing the name.

Surprisingly, the Hamilton Fire Patrol is the only pedal fire Jeep that came with both a ladder and a hose designed to connect to a garden hose, offering more fun than the pair of little ladders found on most of the other Jeeps. 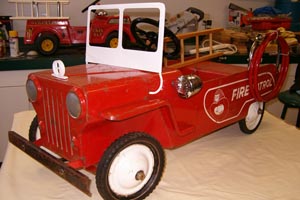 The description of the toy's features in the ad above includes "easy-to-reach siren mounted on hood," but this Hamilton belonging to Len Dunn mounts the siren in an much-easier-to-reach spot on the side, and puts a Hamilton logo ornament on the hood. 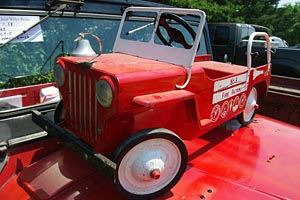 Another Hamilton photographed by Jacy Marquette at the 2012 Great Willys Picnic has a bell instead of the siren, and revised graphics on the side including pump gauges. 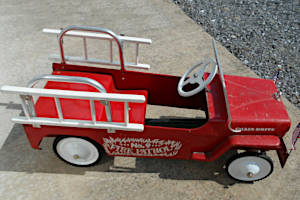 This later example has yet another graphic on the side, and has chain drive replacing the original oscillating pedal drive. 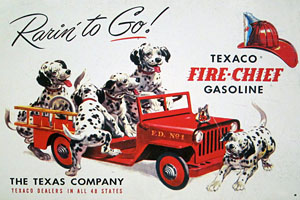 The Hamilton Fire Patrol Jeep was probably the inspiration for this famous ad for Texaco "Fire Chief" gasoline. 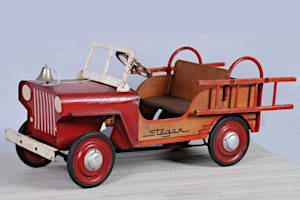 The Steger Jeeps, manufactured in Chicago, are unique for their wood sides and back attached to a steel front end. Their fire version had grab handles and ladders on both sides, and an overall length of 42 inches (107 cm). 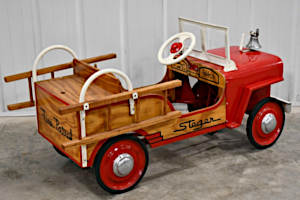 Steger also used the "Fire Patrol" name, stencilled on the back. An earlier example (170K JPEG) has different lettering, and lacks the dashboard graphics. 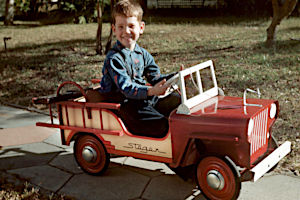 This 1949 slide shows a Jeep that looks brand new except for the missing bell. Do you think this young lad's parents removed it? Photo courtesy ElectroSpark on Flickr. 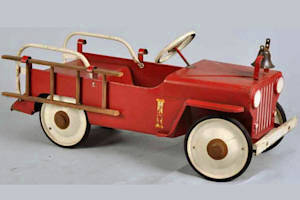 The unique feature of the Jeep fire truck from Sherwood Toys of Walden NY is the rear step, useful for a rear-facing passenger. This early example has a "Fire Truck" decal (70K JPEG) on the side, and does not appear to have had a windshield. 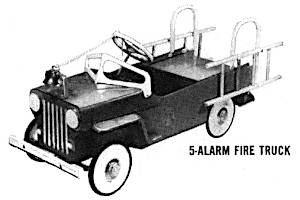 By 1952 a distinctive V-shaped windshield had been added to the fire truck. Not very Jeep-like, but again the toy company may have thought it would reduce the chances of Willys Motors demanding a licensing fee. 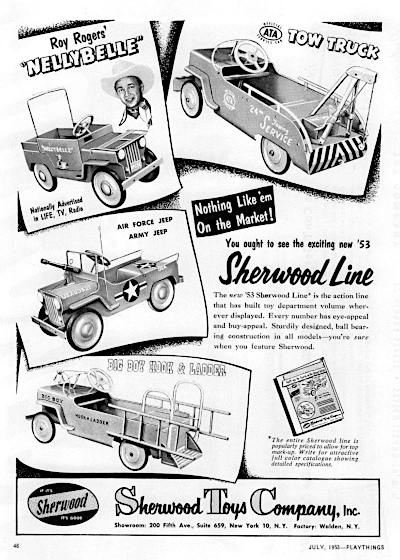 For 1953, Sherwood adopted the name "Big Boy Hook & Ladder" and for some reason changed the windshield on this and their tow truck to a more fragile design. These windshields differentiated the Sherwood Jeeps from similar Hamilton models.

Despite the motto "Nothing Like 'em On the Market" seen in this ad, Sherwood's Army and Air Force Jeeps appear to be virtually identical to the Hamilton versions. The machine gun and radio aerial are the only apparent differences. 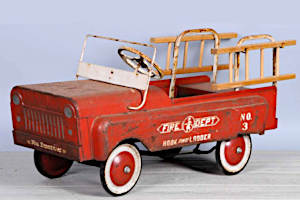 The Garton "Hook and Ladder" truck doesn't look anything like a Jeep, with the exception of the front grille and windshield, but it's the same vehicle that came in Air Force and Army Jeep versions. 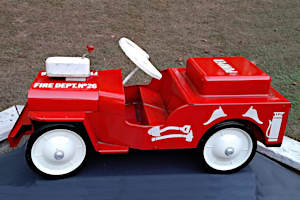 The Structo is not quite a pedal car, at only 25-1/2" (62cm) long and with no pedals! It's one of the Toddler Riding Toy Jeeps, but the nice Fire Dept. version probably deserves to be included here. Of note is the original siren on the hood, which is usually missing. One mystery is why Structo didn't make it look like a siren instead of a loaf of bread! Thanks to Tom Traylor for the photo. 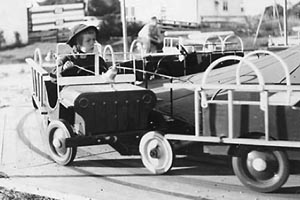 This photo, apparently from the 1950s, shows a carousel of Jeep fire engines based on the Junior-Pro pedal-drive Jeep. It's not clear whether the ladders and bells were added to the red Junior-Pros just for this ride, or whether the company may have actually built some as fire engines. See also another photo (50K JPEG). 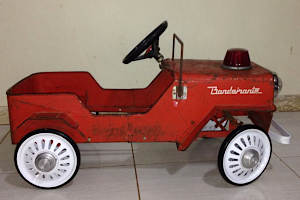 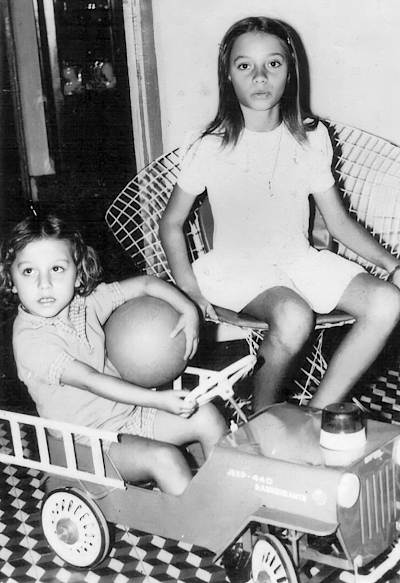 This archival photo courtesy of Gilene Alves de Oliveira shows a Banderainte with a pair of ladders that appear to be for decorative purposes only.

As of 2021, reproductions of the Banderainte pedal Jeep produced by Garagem Pedal Car in Brazil include a Bombeiros version (70K JPEG). 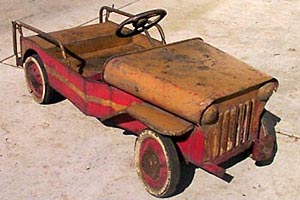 This unidentified toy has a longer hood than most, and a grille stamped outward instead of inward. See also a bottom view (20K JPEG) showing the pedal drive.

Jérôme Stevens in France sent a picture of another pedal fire Jeep (60K JPEG) of unknown manufacture. It has a rubber hose reel in the back, and the body has four sockets that appear to be designed for an overhead ladder rack, which would probably make it the most realistic of the pedal-car Fire Jeeps. 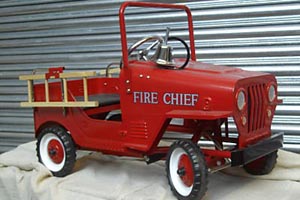 This brand-new pedal car, possibly made in China, was being sold on eBay.uk in early 2009. Chris Kistell sent some photos, saying "It is surpringly good quality for the price. Unfortunately it came in a plain cardboard box and has no manufacturers stamp. The assembly instruction sheet gives no clue as to where it originates from either. There was an advertising flyer (100K JPEG) included in the box." 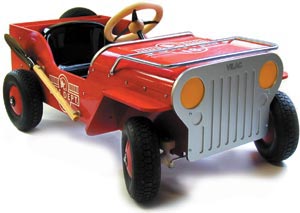 This all-wood flatfender is another recent product, built until about 2004 by Vilac, a French company which makes a wide range of wooden toys. Jerome Stevens found it selling for about 400 Euros in late 2003. The fire Jeep version is complete with shovel. 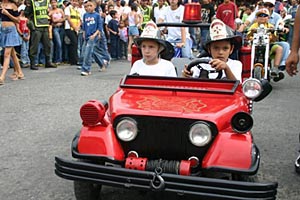 Well, it's not pedal-powered, but it's the most deluxe toy fire Jeep I've run across so I thought we should pass along this photo from a 2006 parade in Calarcá, Colombia. See more photos from the Yipao Festival in Calarcá on CJ3B.info. 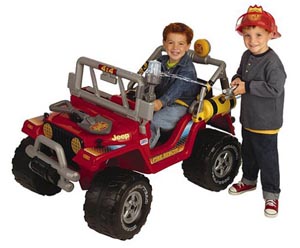 In 2003, Fisher-Price was offering a Power Wheels Fire Rescue Jeep -- a version of their popular battery-powered riding toy including light, siren, shovel and water pump.