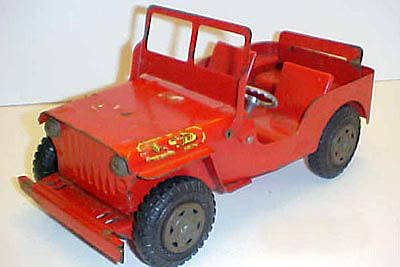 Louis Marx & Co. had been producing its big, metal CJ-2A toy since the 1940's, and all it took to turn the toy into a fire department vehicle was to paint the windshield red and apply the "V.F.D." lettering that was used on most of the fire engines produced by Marx over the years. See also a rear view photo (40K JPEG) of the CJ-2A.

Marx also sold their Willys pickup with the same V.F.D. markings. But at least in this case they also added a red light to make it a bit more convincing. 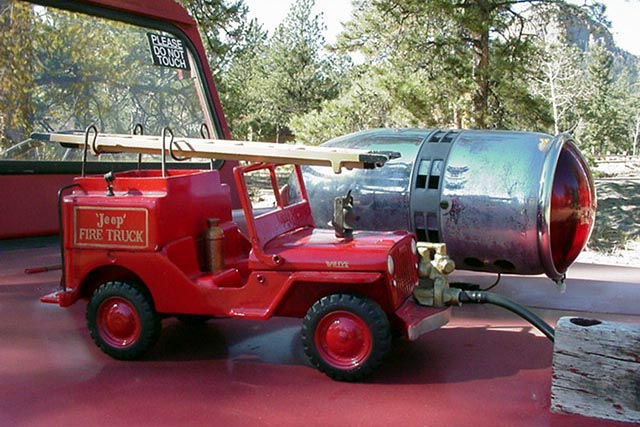 One of the Jeep toys most prized by collectors is this CJ-2A Jeep Fire Truck, from the Al-Toys series cast in aluminum by Toledo Brass in the late 1940's. With realistic extended front and rear bumpers it's nearly a foot long, slightly larger than the Tonka Jeep Pumper produced in the 1960s.

This is probably the most detailed of the Al-Toys, with a front pump, ladder rack, handrail, spotlight, fire extinguisher, and bell all added to the basic body. In addition to the ladder and the suction hose which can attach to the pump, the toy came with accessories including a roll of hose for the hose bed, and a shovel. The photo is courtesy of Jim Marski's Historic Civilian Jeeps Collection.

There is a nice Al-Toy Jeep Fire Truck (110K JPEG) in the collection of the Chrysler Museum in Michigan. See also a mint example in an Al-Toy Jeep Collection. 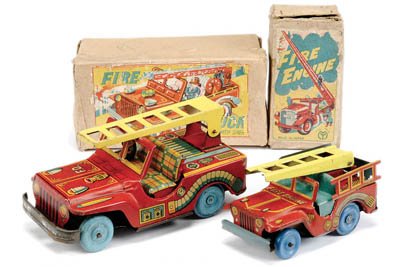 These tinplate fire engines from Japan are smaller -- approximately 4 and 6 inches long. Details such as the siren and the suction hose mounted on the side, are nice examples of Tinplate Lithography on Jeep Toys. And check out the plaid seats in the larger of the two. 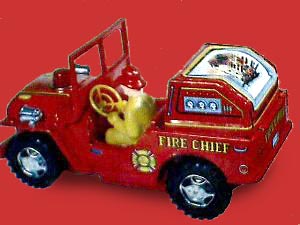 This "Fire Chief" tinplate Jeep appears to be a version of the "T.V. Police Jeep" made in Taiwan by Kuang Hui, a large (9 in. long) toy with an elaborate rear console which includes a lighted "TV screen". The screen displays changing pictures, and the toy also makes a siren sound. (See the police version on the Police Jeep Toys page.) 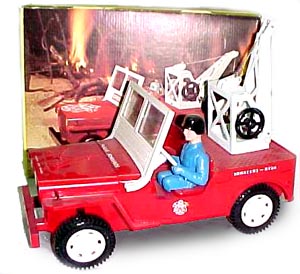 This "Bomberos" (fire department) Jeep from Spain is a recycling by Rico of their Jeep tow truck toy, which was also sold as a military version in camouflage, as well as a yellow "Popcross" wrecker. Thanks to Juan Manuel Yeste Cortes for the photo.

Like many of the fire Jeeps seen here, this is more a fanciful toy than a model that reflects a real prototype. I hope that some of the manufacturers will take a look at the full-size Fire Service Jeeps on CJ3B.info, and get inspired. 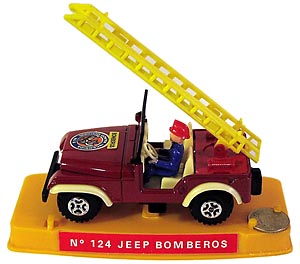 Also from Spain is this Jeep Bomberos made by Guisval, who also have a yellow Renegade and a military version in their line. Comes with a one-peseta coin (dated 1975) in the package for scale; the toy is about 4 inches (10 cm) long. 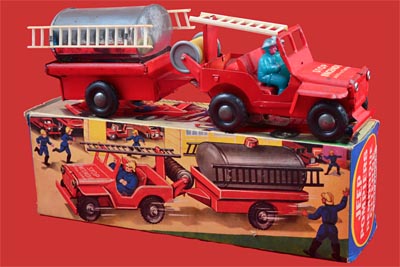 In a similar scale, this 1950 Joyax tinplate set from France totals about 10 inches (25 cm) long with trailer. See also Early Jeep Toys Made in France for more examples of Les Jeep Pompiers. 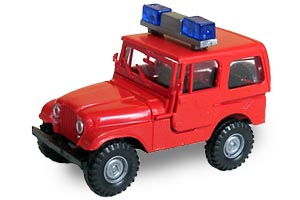 The smallest fire Jeep toy I know of is this version of Roco's HO-scale CJ-5 from Austria. 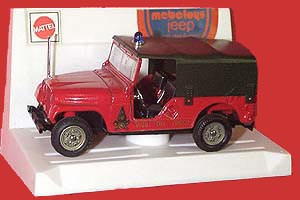 "Vigil del Fuoco" is a 1/43 diecast produced by Mebetoys of Italy in 1974. Mebetoys produced diecasts beginning in 1966, and became a subsiduary of Mattel in 1970.

This photo was taken by Jarek Skonieczny, who comments that the model seems to be largely based on the M170 as opposed to the more common CJ-6. There are military blackout lights in the rear, and a pick and a shovel where the tailgate would be on a CJ-6. The split windshield has vacuum wipers on the top, but the front blackout light and the larger passenger-side door opening of the M170 are missing.

Jarek also says, "It would be interesting to see how the blue emergency light holds up on the soft top, while driving over some rough terrain to put out brush fires."

See also a photo by J-C Guerry of a Carabinieri (Italian police) version of the Mebetoys model (60K JPEG). 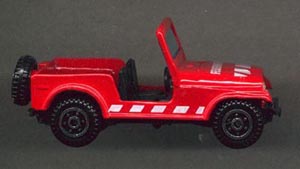 "Feuerwehr" is printed on the hood of this 1/64 CJ-7, apparently a Made in China toy destined for sale in Germany, and photographed by Mike Albright.

A similar Jeep is included in a dollar-store Fire Vehicles Playset (100K JPEG). 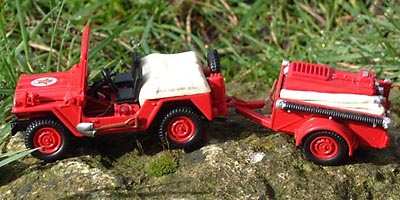 Pete Pearson photographed this Corgi Limited Edition 1:43 scale M151 fire tender and water trailer, on the way to a brushfire call. The model carries a Texaco star on the hood (40K JPEG), but is it likely that an M151 MUTT was used by an oil company as a fire fighting vehicle? The M151s retired by the U.S. military were considered unsafe for civilian on-road use, and many were cut in half in an effort to prevent such use. 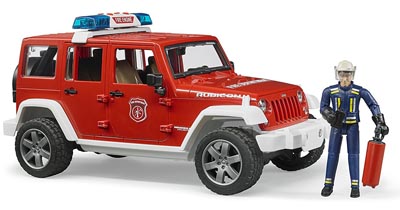 In a big 1/16 scale, this JK Unlimited is manufactured by the family firm Bruder Toys in Germany. Their plastic toys combine realism and durability, which is probably why they are priced at over US$50 in 2018. 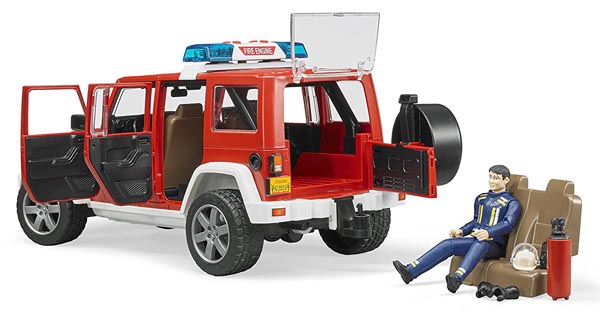 The Jeep has opening doors and removable roof, as well as buttons on the light bar for sound effects. Plus an Arizona plate!

Maisto released a brushfire version of their plastic 1/18-scale Rubicon TJ in 2005.

The Maisto Rubicon was sold in yellow as well as red. Details include opening hood and a chainsaw in the rear. 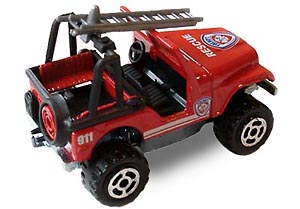 As of 2002, Majorette, the French company now merged with Solido, has a Fire Rescue version of their reliable 1/56 CJ-5 casting. It's created by means of adding a plastic ladder clipped to the roll bar, and a paint job similar to that recently put on the Majorette SJ Cherokee. 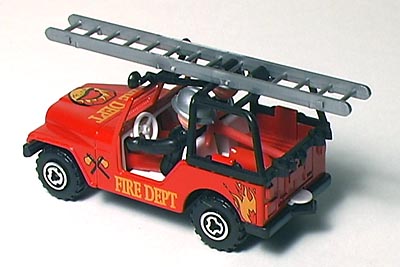 Majorette released a "Fire Dept." version of their larger CJ-5 in 1998. Marked as 1/46 scale, it appears by rough measurement to be closer to 1/36. Manufactured in Thailand, it comes in a set with two plastic figures. 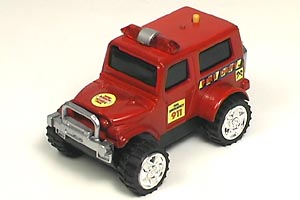 A recent toy made in China has a working flasher and siren, activated by the yellow button on the roof. It's also available in a police version (70K JPEG). 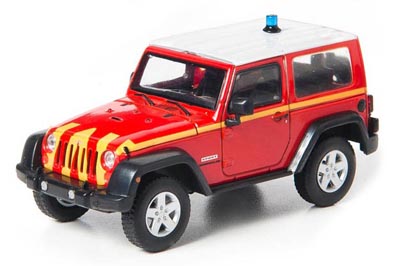 GreenLight Collectibles started doing Wranglers in 2011 and as of 2021 are turning them out faster than ever, along with a variety of other Jeeps. This French Fire Dept. Jeep is one of their first, a 1/43 model from 2012. 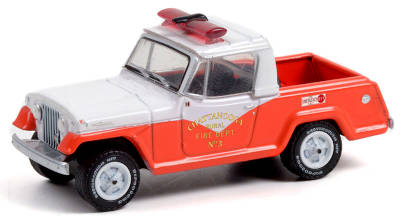 GreenLight's newest as of late 2021 is a good use of their 1/64-scale Jeepster Commando casting, which has appeared in a variety of forms including the famous Hurst Commando (50K JPEG). 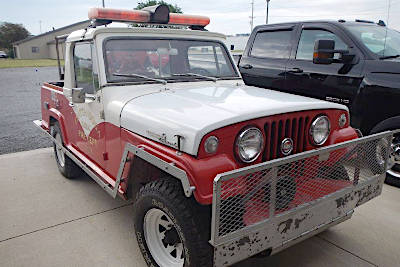 As is frequently the case, GreenLight based their model on a actual prototype they found on the web, and Chattanooga Rural Fire Dept. No.3 is an unusual one; in fact it's the only fire service Commando I know of.

The model has the correct graphics and light bar, but unfortunately GreenLight painted the front grille the wrong color, at least according to their pre-release photo. 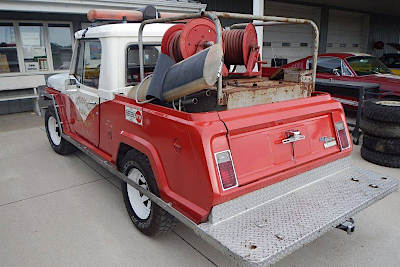 They also decided to do without the brush guard, the rear step, and the water tank and booster reels in the back.

The 1:1 Jeepster was for sale online as of late 2021, complete with the water tank skid unit in the back. It has the 225 V6 Jeep Dauntless engine, and shows 6,630 miles on the odometer.


Thanks to Jpzank at Flickr for the Marx Willys pickup, also Mike Albright, Toshimi Ohashi, and all the other photographers. -- Derek Redmond