Tinplate Lithography on Jeep Toys: How It's Done

Lithography ("drawing on stone"): an old printing process based on chemical reactions between oil and water.

It was discovered in 1798 that if limestone was ground perfectly flat and drawn upon with a grease-based crayon, and the stone was then treated with an acidic gum arabic solution, the open parts of the stone would attract and hold water, while the greasy areas of the stone repel the water. If an oil-based ink were rolled over the damp stone the ink would transfer to the greasy areas only leaving the damp areas free of ink. When run through a press the ink transfers to the paper. This creates very accurate prints. It was, and still is one of the best means of creating accurate editions of art prints. However there is one small problem -- the stones can weigh up to a ton or more. In addition, they don't really print too well on a perfectly flat non-absorbant surface like tin.

In the late 19th century it was discovered that very thin metal plates could be substituted for the stones, and since they only weighed a few pounds or even less, they were easy to handle and no storage problem. Although commercial printers no longer used stones, the term "lithograph" stuck. With the lightweight metal plates, high-speed presses could be used, and they did beautiful work on paper. But printing on very hard flat surfaces like tin was still an unsatisfactory process. 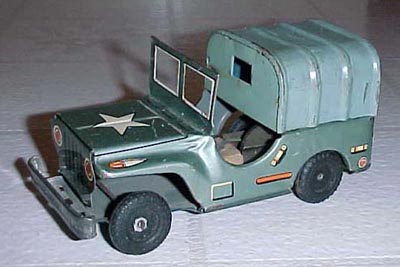 In the early 20th century several American printers figured out how to do it. If the printer rolls a very large rubber roller over the printing plate the image transfers beautifully to the rubber surface. If the roller is then rolled over paper, cardboard, tin, or even glass the image "offsets" (transfers) from the roller to the paper or tin beautifully. The transfer of ink from the plate to the rubber roller and then to the paper or tin is called "offset lithography". This is what is used on tin litho toys.

After the Second World War the Japanese had an excess of mechanical skills, hand skills and time. Some of the greatest tinplate lithography was done in post-war Japan.

One of my tinplate lithographed Jeeps has 8 colors in close to perfect registration. This is enormously labor intensive and I'm sure that many used even more colors. These were produced at the same time that Marx Jeeps and later Tonkas were produced in one or two colors with sometimes a decal or two for spots of additional color. 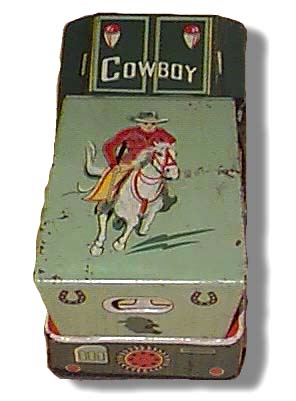 Printing hundreds and thousands of items in more than one color demands absolute uniformity of size, shape, thickness, and smoothness of the surface to be printed. In the case of tin lithography the tin is treated exactly like paper. It must be cut to exact dimensions. Each color demands that the paper or tin go through the press again (for that particular color). Some tin litho toys went through the press many times. It was a lot of work, but we are talking about very low cost post-war Japanese labor. And that's why they could do such great work so much cheaper than American manufacturers.

If there is the slightest lack of uniformity of material or miscalculation on the part of the printer or designer it will mean that registration is bad. Registration (each color being where it is supposed to be) is the key to color printing. It has been suggested (see Japanese Tinplate Jeep Toys) that tin cans were recycled to create some of the marvelous tin litho toys, but it would be next to impossible to use recycled tin cans and still maintain the accurate color registration found on lithographed tinplate toys. 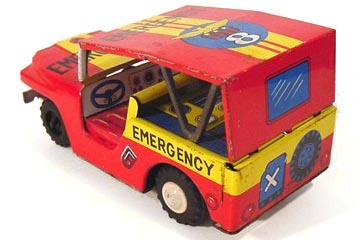 There is an alternative theory which I think makes more sense. More than likely the company which printed and manufactured the tin cans is the same one which manufactured the toys. In printing there is always an overrun and in multi-color work the overrun can be large, to compensate for spoilage. It would not be unlikely that in manufacturing tin cans there could be a lot of imperfect printing on sheet tin (discovered before the can shapes were stamped out). This would normally be sold for scrap and melted down.

But the tin Jeeps (and other toys) gave the manufacturer an opportunity to use this otherwise almost useless material for profitable manufacturing. Using the reverse side of the printed sheets the manufacturer could lithograph the colors in accurate registration just as he did in making cans. In essence the tin was as close to free as you can get and was already in the shop. In addition the machinery for manufacturing toys was already in place.

Another interesting aspect of tinplate toys is that very little is known about the manufacturers and often the manufacturer is not named on the toy. This is the era when (the story goes) a manufacturing town in Japan changed its name to Usa to be able to label their products "MADE IN USA".

Thanks to Bart McNeil for this information, and thanks to Mike Boyink for the "covered wagon" Army Jeep photo. -- Derek Redmond