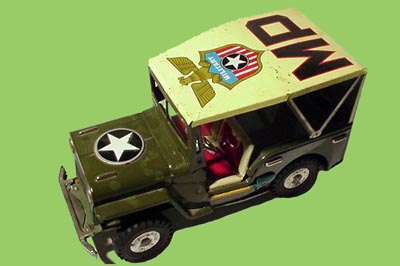 I'm sure there were lots of U.S. Army jeeps around in postwar Japan, but it doesn't seem likely the colorful tops on some of the lithographed tinplate from Japan were based on real prototypes. 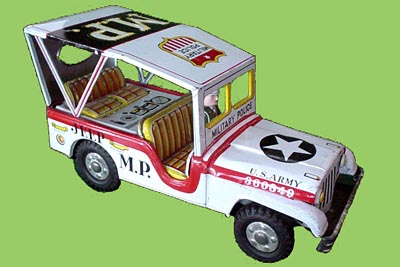 Another nice Japanese example. This 9-inch long tinplate M.P. jeep is marked "Made in Japan" on the rear, with a small drawing of a bunny head. As is often the case with these friction-motor toys, the back seat is filled with printed-on electronic gadgets. 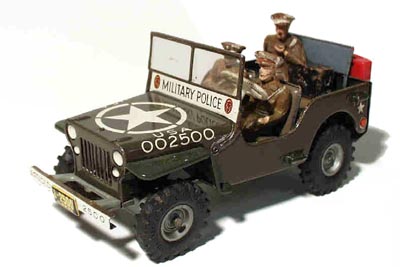 This MP Jeep manufactured by Arnold of West Germany in the 1950s, is one of many German tinplate Jeep toys catalogued by Franz-Gerd Haas in his book Tin Toy Jeep. 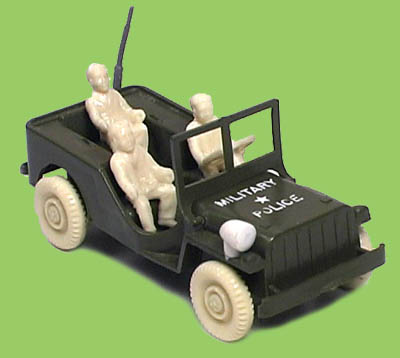 This plastic Military Police jeep is an interesting toy for several reasons. It's a mid-1950s product of Thomas Toys, but is basically a reissue of one of their first toys made ten years earlier, and based not on the Willys MB but on the Bantam BRC40. Thomas also molded it in red, and possibly other colors, still with the Military Police markings and siren. Some included figures wearing military helmets, but some used these slightly eerie white civvy figures. Possibly aliens, or at least alien-chasing government men? See more details on Thomas Toys on the Bantam Jeep Toys page. 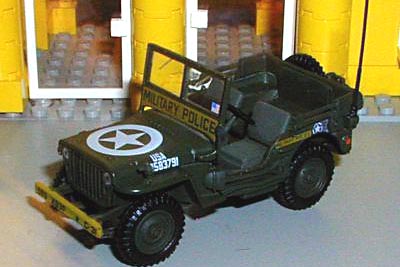 This is a Victoria diecast -- R003, "Jeep Willys, Military Police". 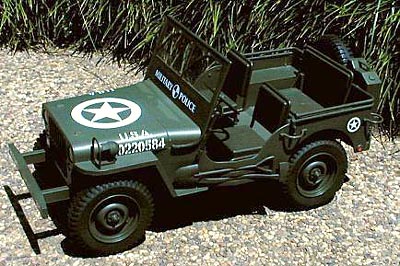 The Soldiers Of The World (SOTW) Jeeps are plastic, but are big -- 21 inches long (54 cm), with excellent details. This is the MP version in the 1:6 scale series.

See a rear view with the dashboard details (70K JPEG). See also the Navy Shore Patrol version (30K JPEG) from the Deluxe Edition series, which is gray-blue with a matching canvas top. 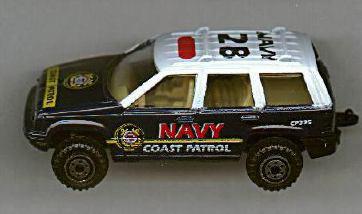 This small China-made Grand Cherokee is a "Navy Coast Patrol" vehicle. Is there any prototype basis at all for this toy? 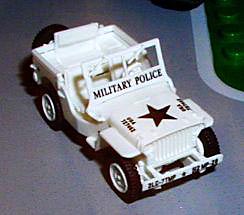 At the very small end of the size spectrum, but still incredibly detailed, is this HO scale (1:87) Roco Minitanks model #632. It is approximately 1-1/4 inches long (3.5 cm). The hood opens to reveal a detailed flathead engine. See the model in the original package (30K JPEG). 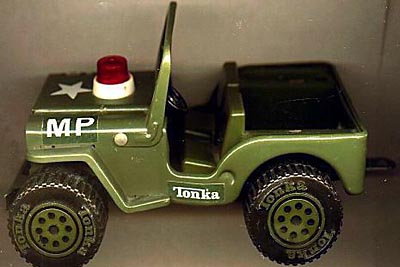 This Military Police flatfender is one of the Mini-Tonkas. It is approximately 6 inches long (15 cm), and has a really interesting feature: unlike the other Tonkas, this one has a 'fixed' windshield that can't be folded down.It was obviously made this way so that the red emergency light on the hood would not get damaged. See it in comparison to two other military Mini-Tonkas (50K JPEG). 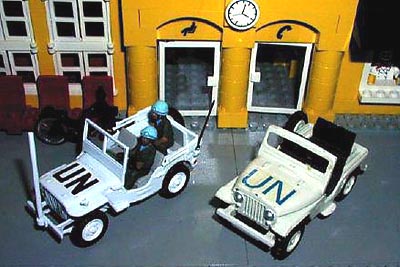 United Nations peacekeeping Jeeps probably qualify as military police vehicles. On the left here is Victoria release R023, "Jeep Willys, United Nations, Lebanon 1978." The vehicle, used by French troops, would probably have actually been a Hotchkiss M201, rather than a Willys MB.

On the right is the UN version of MiniMac's 1/43 "Jeep Ford, Made in Brazil." Brazilian police and military observers have been involved in UN missions including El Salvador in the early 1990's. See a larger photo (40K JPEG) revealing the squared rear fenders of the Jeeps built by Ford of Brazil.

Thanks to Jarek Skonieczny and to Mike Albright for this latest page based largely on his collection of Jeep toys. -- Derek Redmond