Majorette's 1:60 scale (Matchbox size) model of the Jeep Cherokee Sport is manufactured in Thailand for the French firm, and has been sold under two model numbers. 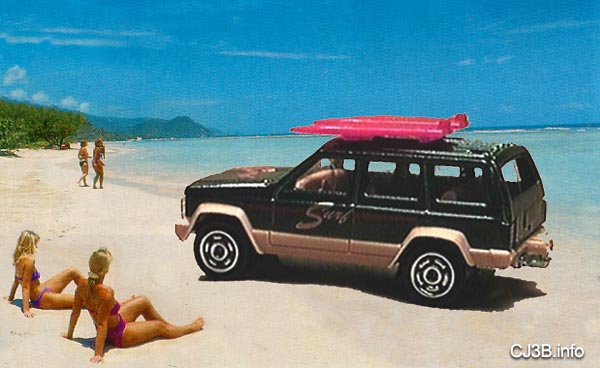 Model #224 has a working rear lift gate and two plastic surfboards on the roof, and comes in black or dark metallic green (in the photo) as well as some less common variations (80K JPEG) including a bright green one (50K JPEG) from a Japanese "Digimon" set. 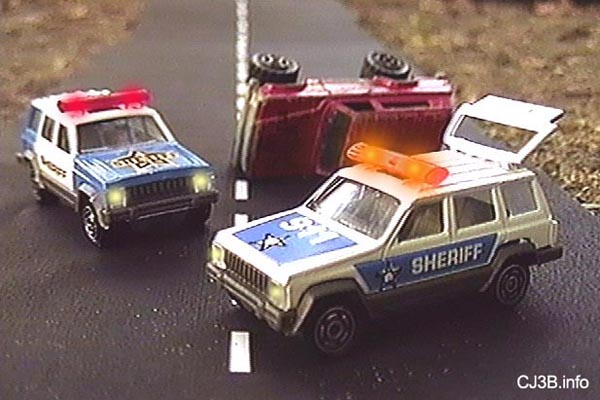 Model #285 has emergency lights in place of the surfboards, and three different "Sheriff" paint schemes. In this photo, the deputies have arrived to find that "Mad Bull" has rolled his lifted SJ -- maybe this explains what happened to the dog (see below).

The "Sheriff 911" version has also been released in a "Rescue Force" package (40K JPEG) with two plastic figures (and a red light-bar replacing the amber one). The military "Squad Forces" series has a camo version (15K JPEG.) 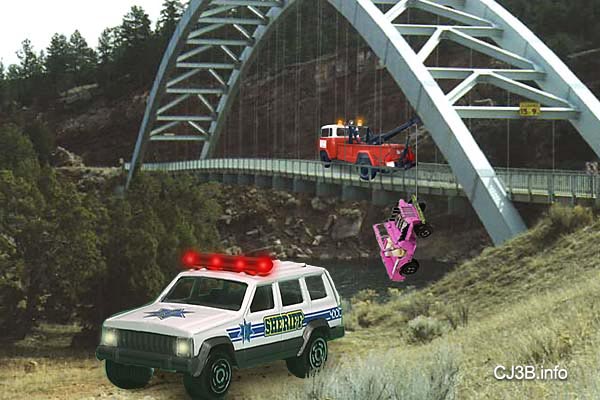 There was also a third Sheriff paint scheme for #285. CJ3B.info took an action photo of the new Sheriff supervising the recovery of a Matchbox Hot Rod Jeep.

This Majorette model represents the earlier-style Cherokee, known (along with the similar Wagoneer and truck) as the "Full-Size Jeep". The early versions of this model (#236), made in France, had a dog in the back. Later versions have only the dog's bed, and raised blanks where the dog's feet and tail used to be.

The early "dog" casting has much more de-tail (no dog pun really intended) on the body, and has amber windows and a plastic tail-gate matching the paint. This can be identified as a 1977-78 "S" Cherokee by the round headlights and the small round badge behind the side windows. 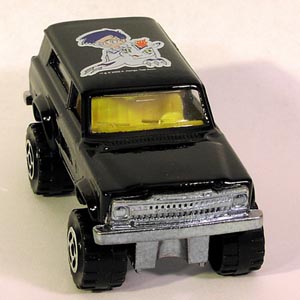 The same body was used with oversized wheels, in various colors and with various decals added (100K JPEG) including Coca-Cola and Digimon (seen here in black). It has clear windows, the same tailgate but in black plastic (35K JPEG), and no dog. Duncan McInnis has identified a version with both the dog and the oversized wheels (10K JPEG.)

This more recent version is made in Thailand, has most body detailing obliterated, and a bar added across the front grille. The license plate molded into the tailgate is the same (267 JE69), but there is no vehicle identification on the bottom other than "No. 236", whereas the earlier version was labelled "Cherokee 4x4". Bill Kelsey of the International Full-Size Jeep Association, says "This last version has been so deliberately altered that one has to wonder if there was some sort of legal problem with continuing to produce the Cherokee." 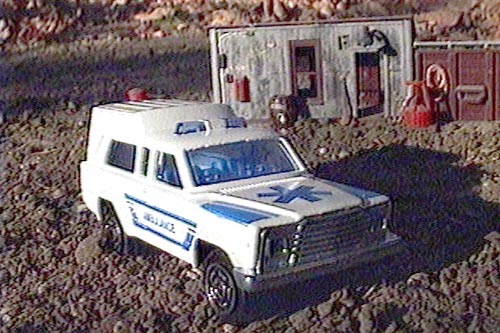 Majorette also produced a variant of the Cherokee modified into a 4x4 Ambulance with opening rear doors (#269). This version has the highly detailed body (40K JPEG), normal rather than over-sized wheels, and a modified rear. Oddly, it has the grille (and rectangular headlights) first used on the Cherokees and other full-sized Jeeps in 1979, but which Majorette appears to have never used on the other Cherokee (#236) vehicles.

The ambulance includes a detailed plastic stretcher and patient inside the opening rear doors.

I don't know what prototype might be represented by this model with its extended roof. See a couple of possibilities in Jeep Ambulances on CJ3B.info.


Duncan McInnis has compiled a list of eight known variations (30K JPEG) of the graphics on this model: