The Roy Rogers Show on NBC-TV from 1951 to 1957 featured Roy's sidekick Pat Brady with his Jeep "Nellybelle". The popular cowboy show and the movies that preceded it inspired extensive merchandising of toys and clothing, including a few Jeep toys that have become real collector's items. See The Original Nellybelle for more details on the series and the original Jeep. 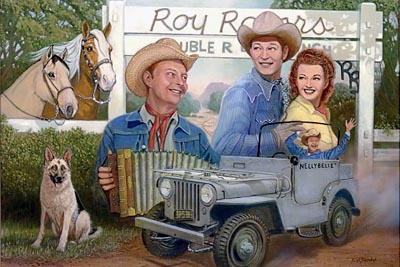 This picture is an acrylic painting titled "Roy and His Pals" by Sean Sullivan. Rick Morris told us that it was also sold as a postcard at the Roy Rogers and Dale Evans Museum. The original was listed, along with Nellybelle, among the items to be sold at an auction in New York in July 2010 after the closing of the museum. The painting sold for $10,625. 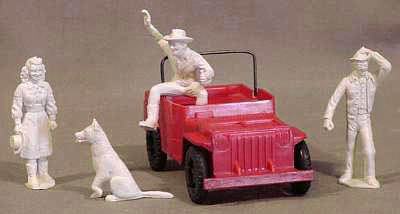 To make a convincing Nellybelle toy, you couldn't just slap her name on a standard toy Jeep. She had unique bodywork which gave the impression of armor around the cowl and doors, and side storage compartments in the rear.

Marx had a plastic version (approx. 1:32 scale) which included the extended bodywork and also the support bow for the canvas soft top, always in place on the real Nellybelle even though she never seemed to be wearing her soft top. 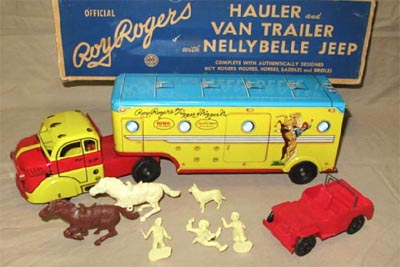 The plastic Jeep appeared in Marx playsets including the Roy Rogers Ranch (above) and this horse hauler set. I wasn't sure if this one had any basis in reality, although I knew Roy and Trigger did make live appearances at rodeos around the country. 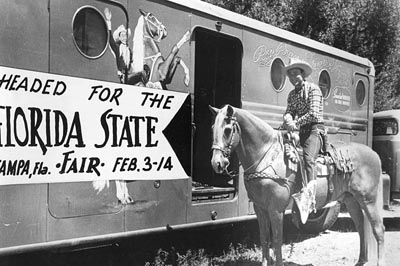 Terrence Kiefler answered my question: "I was a huge Roy Rogers fan back in the '50's and this is a photo indicating that Roy did in fact have a hauler and trailer that he used to take Trigger to various events held across the country. Unfortunately I never had a chance to attend one of them." 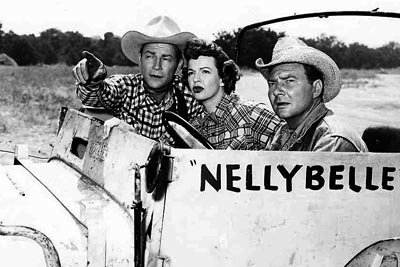 This NBC publicity still of Roy, Dale and Pat was released to the press in 1952 to promote their upcoming live appearance at a rodeo in New York's Madison Square Garden. The caption claimed Roy was pointing out a road direction as they headed East in Pat's trusty Jeep! 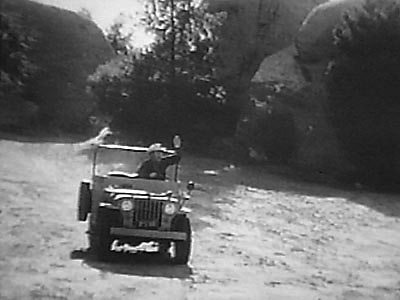 Since the TV show was in black & white, the colour of Nellybelle was not obvious to most of us, and it's not surprising toymakers might want to take some liberties with her grey paint job. She was in fact a "colorful" cantankerous character on the show, always likely to be losing her brakes on a steep hill, or refusing to start when her services were required. 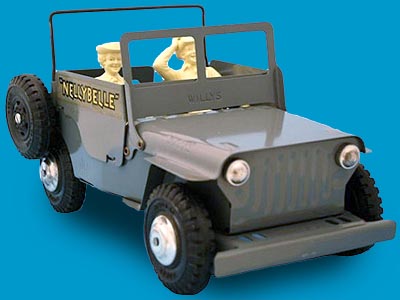 The Roy Rogers edition of the large pressed-steel Marx Jeep not only has an accurate paint job, but also the correct bodywork, spare tire, folding windshield and removable top bow. In a nice touch, the plastic Pat Brady figure is holding on to his hat while "Queen of the West" Dale Evans holds on, gritting her teeth.

And the hood opened to reveal a pretty good likeness of the flathead engine (100K JPEG). 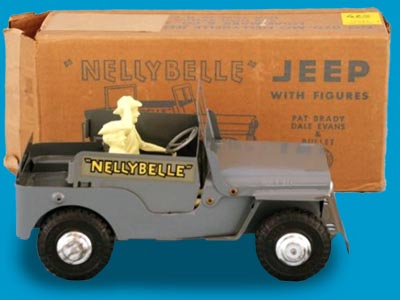 The big Marx Nellybelle also has a California license plate on the rear (70K JPEG) and the gun slot in the front armor plate behind the windshield. To get the true Nellybelle spirit though, the windshield should be kept folded down.

The Marx steel Jeep was 11-3/4 inches long and 5 inches wide. For more details on other versions of the toy, see Precursors of the Tonka Jeep on CJ3B.info. 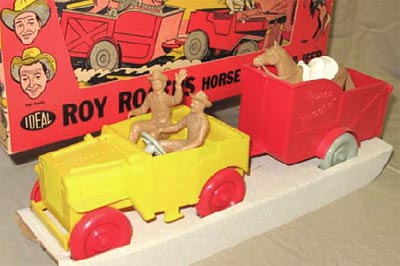 A plastic playset from Ideal also includes character figures, as well as a red trailer with Roy's horse Trigger. The Jeep comes in various color schemes including grey, yellow and red. Including the trailer, the set measures approximately 15 inches long by 3-1/2 inches wide. 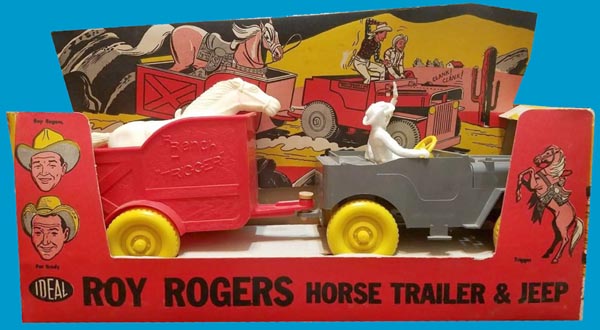 The Ideal version was clearly modelled on a CJ-3B, and the box for the horse trailer set has a great illustration (170K JPEG) of a cantankerous high hood Nellybelle. 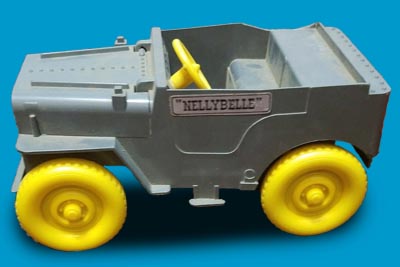 The "Nellybelle" stickers on the sides are often missing now, but reproduction decals are available.

Ideal also included the Jeep in a "Rodeo" set and a "Chuck Wagon" set (below) which is about 22 inches long overall and includes a variety of small plastic accessories (260K JPEG). See also the cardboard box for the set (260K JPEG). 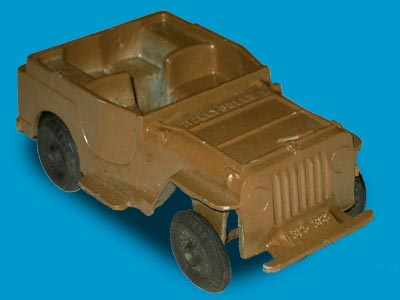 A small (approx. 1:43) diecast metal Nellybelle from Stuart Mfg. of Cincinatti was a simple toy, again in a high-hood configuration. It was originally part of a Roy Rogers playset created for Post Cereals by C.F. Block & Associates of Chicago, and the Jeep may actually have been produced by Tootsietoy in Chicago. The plastic figures and the Jeep were then sold to Stuart who added them to their own line of cowboy toys. 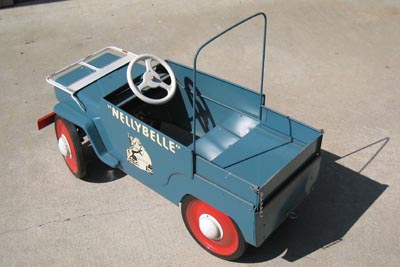 David Wiley points out that "The cut-out behind the windshield (200K JPEG) was there so Pat Brady or Roy could shoot their pistol through it. I was only 5 or 6 years old I believe and maybe someone told me that's what it was for. To me that was an important part of the authentic models. I had a pedal car replica in the mid 1950s which may have come from Sears-Roebuck, I'm not sure." 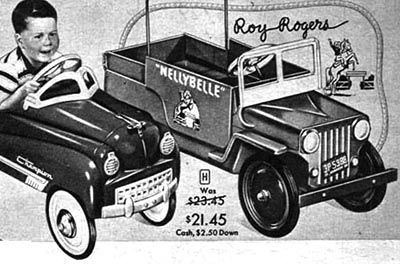 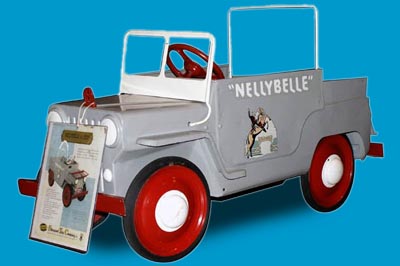 Nellybelle pedal cars were manufactured by both Sherwood Toys and Hamilton Steel Products, and produced in the correct grey as well as blue. Aside from a maker's decal on the rear (120K JPEG), the Hamilton version can be identified by the plastic "H" hood ornament. The Hamilton seen here is displayed with a Sherwood advertisement. 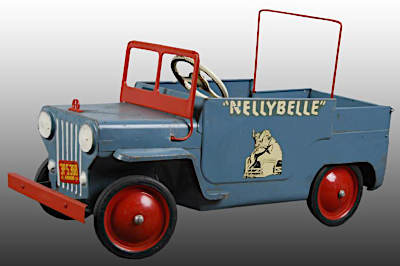 Original color schemes also included red windshields. Decals provided Nellybelle's name, plus a drawing (130K JPEG) of Roy on Trigger, which was a smart use of the space on the large, prototypical doors. Repro decals are available for restorations. Some of the original decals were in color (90K JPEG). 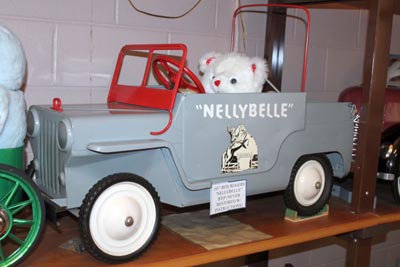 An unrestored gray and red version is displayed at the Sieverling Antique Car and Pedal Car Museum in Ephrata, Pennsylvania. Photo courtesy of PAMustang.org. 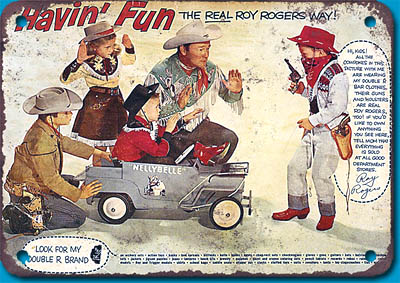 This "Double R Brand" advertisement features the pedal Jeep, along with clothes and toy guns, but also includes a lengthy list in small print of merchandise from other manufacturers, including archery sets, guitars, jigsaw puzzles and stuffed toys.

Some of the Nellybelle toys represented her as having a high hood, similar to the model CJ-3B, released by Willys early in the run of the TV show.

The cutout Nellybelle below, from a set in Gary Keating's collection, also is clearly a 3B. The set includes characters, horses and accessories, but Gary doesn't have the original packaging to identify the manufacturer. It may be from the Post cereals promotion (see Win a Willys Jeep from Post Cereals). Nelleybelle lapel pins (40K JPEG) given away by Post also show a green high-hood Jeep. 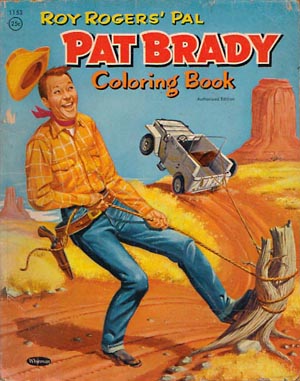 Although Roy Rogers was seen driving a CJ-3B in the Post cereals promotion, Nellybelle on the screen was always a CJ-2A. The cover of Gary's 1956 Pat Brady coloring book shown here has a pretty accurate 2A illustration as well. Gary says there are lots of Nellybelle pictures to color inside, along with other scenes from the ranch.

See The Original Nellybelle for more details on the series and the original Jeep.