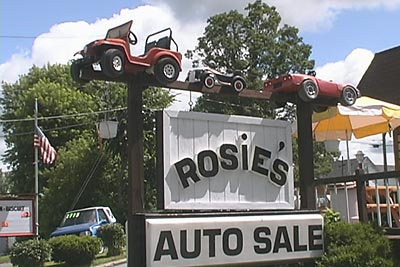 The "Power Wheels" battery-powered Jeeps became a phenomenal success in the 1990's. They're expensive enough that you might expect to find them on a used car lot, but this photo from Watertown, NY shows creative use of one to advertise full-size vehicles for sale. They've been available in various different models; see a page from the 1996 catalogue (40K JPEG) and the 2002 catalogue (80K JPEG). New in late 2002 was the Limited Edition (70K JPEG) and in 2003 the Fire Rescue Jeep (70K JPEG) with light, siren, shovel and water pump. 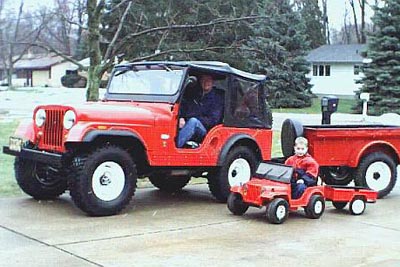 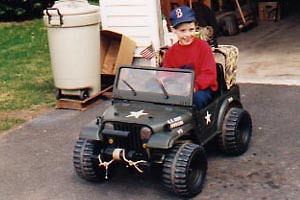 Gary Keating bought a couple of used PowerWheels Jeeps at a tag sale, and painted them to match his M38. They have been enjoyed by various young friends and relatives. See also a closer side view photo (40K JPEG). 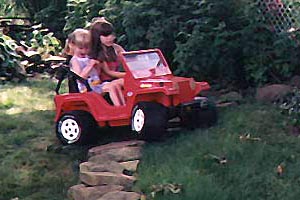 Randy Brown took this photo of some Power Wheels off-road action. This kind of performance requires a Jeep and battery in top shape. If you need parts or batteries for electric ride-on toys, see Kids Wheels on the web. 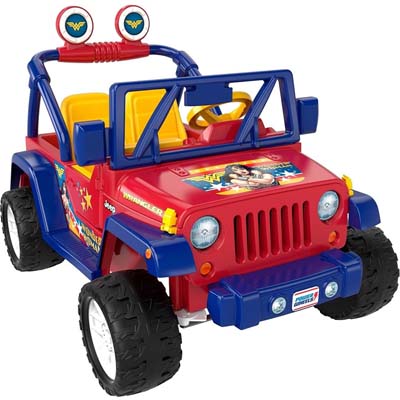 As of 2018, the Power Wheels lineup still has a number of Wranglers, and Fisher-Price has apparently noticed that girls still love the little Jeeps. Their catalogue includes Barbie and Disney models, and another recent movie tie-in was this Wonder Woman version. 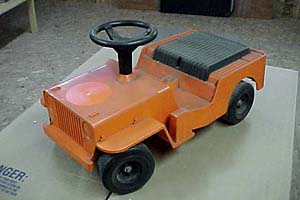 PowerWheels didn't invent the battery-powered Jeep concept. This battery-driven "Eldon Poweride" dates from the 1970's, and used to have a round sticker on the hood that said "Jungle Jeep." Owner Mike Boyink has had it since he was 4 or 5 years old, and says, "I think it was too small; by the time a kid is old enough to control something like this they'd be a little big for it."

See more details and photos of the Eldon Poweride Jungle Jeep on CJ3B.info. 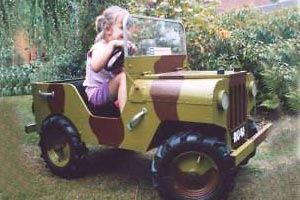 Richard Shepherd spotted this kit offered on the web by "Real Life Toys" in England. Specifications from their website: "Power is provided by a powerful 12/24 volt 180 watt air-cooled, continuous rated, reversible, permanent magnet DC motor, driving through a 25:1 ratio gearbox. The models will run on a 12v battery at a speed of around 2 to 6 mph depending on the size of the load. Final drive is by chain to one rear wheel. Forward and reverse are selected electrically via a three-position switch.

"Fabricated Parts - The other main parts can be either made in your workshop from the simple working drawings supplied or purchased from our comprehensive price list." 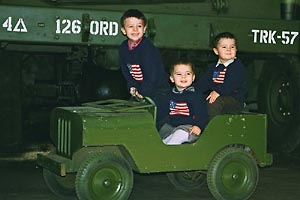 Jérôme Stevens photographed his sons in what also appears to be a Jeep from "Real Life", which he bought at the 2002 Beltring military vehicles show in the UK. It's very similar to the above photo, although missing the headlights and the Agrijeep-style tires. See a larger copy of the photo (60K JPEG.) 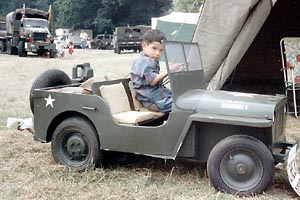 Peter Clarke reports that his father-in-law built this detailed half-scale jeep from scratch for his grandchildren, based on the 1942 Ford GPW (50K JPEG) which Peter restored and owned from 1985-95. He says, "I still have this and it lives on display at Bletchley Park, the famous wartime Station X code-breaking centre. It runs on a 12v car battery which lasts for about 30 minutes -- but that's long enough when you are chasing after an eight year old to make sure he doesn't run into anything! It used to have reverse gear but kids kept slamming it into reverse when travelling forwards, and breaking the drive shaft. Now we've rigged it for forward motion only." 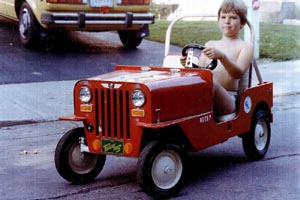 Jean-Yves Morin of Montreal writes, "I was born in 1941 and as a kid after World War II I dreamed of a Jeep to suit my size. Then I found in Popular Mechanics a plan for an electric youngster's Jeep powered by a car starter driving an hydraulic turret motor from an army tank. 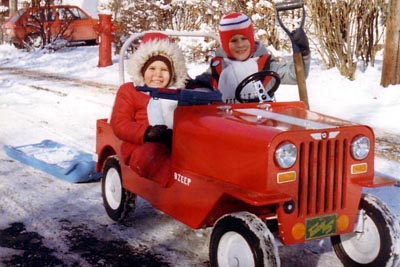 "More than 20 years ago I finally built this electric DZEEP for my two sons. The motor was a VW Beetle generator fed through a step resistor bank. This set-up consumed too much power so I intend to replace it eventually with an electronic power chopper of some kind."