Dispatcher Details:
How to Date Your Tonka Flatfender

by Doug Gagnon and Derek Redmond 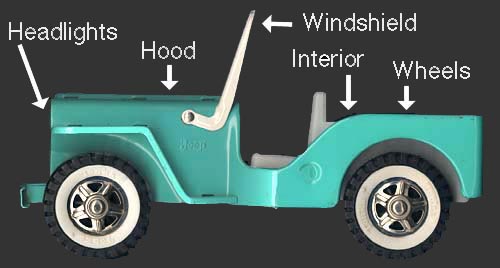 When Tonka first released its pressed-steel flat-fender Jeep toy in 1962, one version was sold as the "Dispatcher". The real Jeep Dispatcher was the 2-wheel drive DJ-3A. Perhaps the DJ was indeed Tonka's prototype -- they also offered the Jeep in a popular surrey-top version based on the DJ-3A Surrey Gala, and all Tonka Jeeps initially had white windshield frames, a Surrey feature. We have noted elsewhere that the Tonka's 9 3/4" (245mm) body more closely resembles the CJ-3B (see Tonka Jeeps Are CJ-3Bs), but two full-size Surreys were purchased by Tonka Toys (see The Original Tonka Surreys.)

Tonka Jeeps are popular today with collectors, partly because throughout the 1960s, Tonka built the Jeep in a wide range of versions and colors. But it also continued to produce some of the original versions for years. So how do you tell when you have found a very early Tonka? 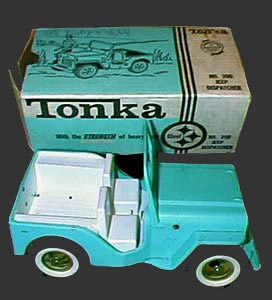 Comparing the two Dispatchers seen here, reveals several detail differences including hubcaps, windshield and hood. What do those differences indicate? The information on this page describes what to look for to estimate the age of a Tonka flat-fender. It can also help you identify inconsistencies that may indicate an unusual variation or an inaccurate restoration. (The picture at the top of the page is actually a Dispatcher produced in Toronto, Canada, where early-style bodies were still used with later-style wheels. See "Tonka Canada" at the bottom of this page.)

Collecting Toy Cars and Trucks (Second Edition) by Richard O'Brien, lists the Tonka Jeep as being first produced in 1962, in the following models, all with white windshields (or in the case of the Surrey, light pink): 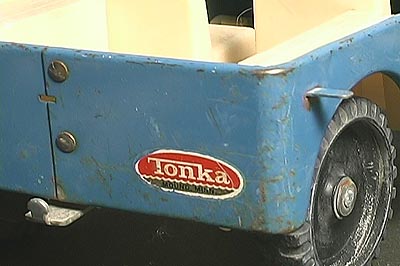 Only the very early Tonkas had the spare tire mount on the side like the real CJ-3B. These probably proved to easy to lose, so the mount was removed leaving only the small slot in the body. Some models then had a spare mounted through the similar slot in the center rear, and eventually the side slot itself disappeared. 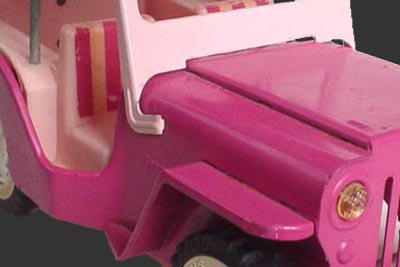 Another indication of a 1962 Tonka is a windshield frame held in place by twisted tabs, a feature soon changed to the more common riveted windshield. These windshields, like the spare tires, are often missing today.

Was the Jeep actually introduced prior to 1962? There are unrestored examples around that have smooth plastic headlights. Pre-'62 Tonka Toys had smooth headlights, and this was changed in '62 to headlights with a faceted surface. But 1962 was also the year Tonka changed the wording in its oval logo to "Tonka", above a wavy line. Prior to this it read "Tonka Toys", and we haven't seen the old logo used on a Jeep.

Note: headlights that protrude rather than being recessed into the body, are a feature of the later 1965 body style (see below).

In 1963 the #249 Universal version was dropped, and two new models (apparently the first Tonka Jeeps with body-color windshields) were added: 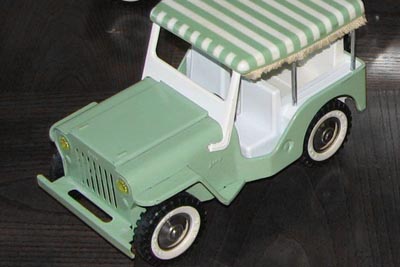 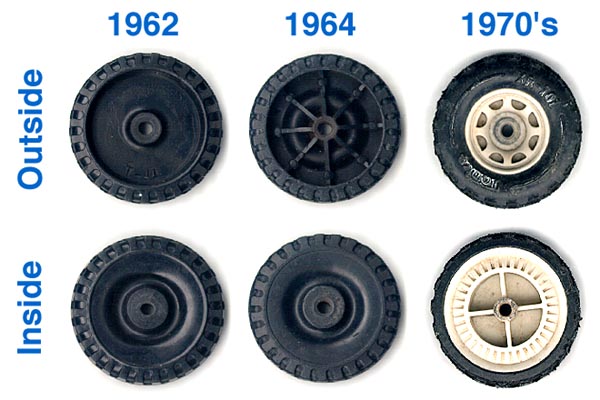 Solid chrome hubcaps appear to have been generally replaced by spoked chrome hubcaps by 1963, although they appeared on the Dispatcher until 1965 (see a 1965 Look Book catalogue page, 40K JPEG). Both types of hubcaps were held in place by white plastic whitewall rings recessed in the outside of the black wheels. The wheels/tires were 15mm (5/8-inch) wide and 590mm (2 1/4-inch) diameter through most of the sixties. The original wheels were made from a heavy bakelite-type material, and were replaced with the lighter-weight "TX-500 lifetime tires" molded in black plastic, in 1964-65.

There are also examples of military Jeeps with no whitewall rings, although most Tonka toys after 1959 had whitewalls. Military flat fenders also appeared later with the 70's-style 30mm (1 1/4-inch) wheels without hubcaps.

Wider tires (25mm, or 1-inch), with a slighty larger diameter (620mm, or 2 1/2-inch), also with whitewalls and hubcaps, appeared briefly in the late 1960s, and the Dune Buggy version came with monster tires. 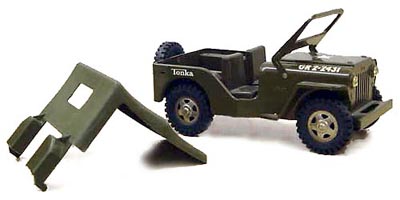 In 1964 Tonka introduced more variations on the basic Jeep:

Significant changes in the construction of the flat-fender body occurred during the course of 1965. Windshields painted in the body color rather than white became standard, the steel bodies changed from three-piece to single-piece construction, and some details of the plastic interior were also modified. These changes were apparently phased in, so examples from the period exist with different combinations of the new characteristics.

1962: The original Tonka 9 3/4" steel bodies had been composed of a central grille/hood/dashboard piece and two separate side pieces. These side pieces were joined to the slightly raised central hood panel by three tabs on each side, and riveted together at the rear of the body.

1965: The new bodies were stamped from a single piece, so there are no seams in the hood, although the piece is still riveted together at the rear. The sides are flush with the grille, rather than protruding in front of it.

Other detail changes on the new stamping include headlights that protrude from the body (see photos above), windshields that are flat across the front rather than having a recessed center panel, and a slight circular indentation in the body where the inside of the front wheel meets the inner fender. 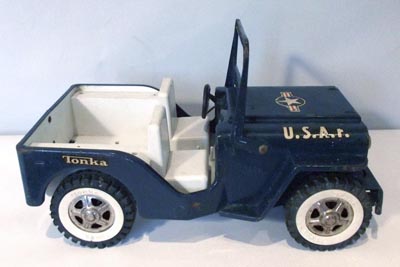 Note: A late 1965 "Look Book" showed the wrecker with black windshield, and snowplow added. The 1966 catalog showed the same lineup.

The pre-1965 front fenders are held in place by three tabs, two on the top and one on the little "running board." The two top tabs are rectangular with rounded corners, twisted upwards, and the bottom one is level with the top of the fender and has a small gouge in it.

On the 1965 and later models, the fender size and shape is exactly the same but the two top tabs are smaller and rounded and are also closer together; the holes to insert the tabs were also changed to receive the new tabs. Because of this change, the fenders from the older Jeeps won't fit the newer Jeeps and vice versa.

There are some fenders which fit both the older and later body styles, with three identical tabs, the same type that are on the bottom of the fender and all level. These pop off fairly easily and apparently were used only briefly.

At some point in the mid '60's, Tonka began twisting the bottom tab of the front fender upwards, to keep it from popping out. 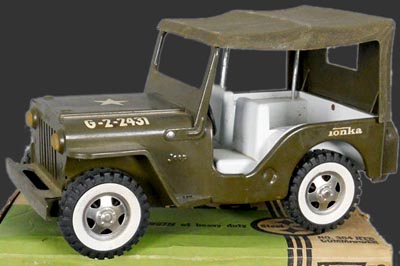 In the 1967/68 catalog, the Police Jeep was dropped, but otherwise the lineup remained the same.

The US Army "Jeep Commander" was standardized to the same white plastic interior and whitewall tires as the civilian and Air Force versions.

Up to 1967, Tonka had been putting a small washer on one end of each axle, with the end of the axle flattened to retain the washer and wheel. This arrangement was replaced in 1968 by the use of an axle cap, which required making the axle a little longer. Neither the disc hubcaps nor the original spoked hubcaps were deep enough to fit over the cap, so they would no longer pop into place in the wheel. Newer, deeper hubcaps recognizable by the ridge running down the center of each spoke, were the result. 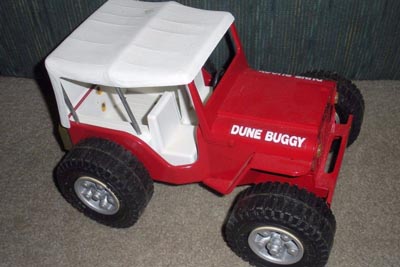 The 1969 "Look Book" saw the introduction of two new models, and new numbers for all models.

In 1970 the Air Force Jeep was dropped, and the Runabout was replaced with the Jeepster Runabout, one of four models based on the new Jeepster Commando vehicle (see Other Tonka Jeeps).

In the 1971 catalogue, the Life Guard Jeep was dropped, the Dispatcher was shown for the first time in lime green paint (with wider wheels), and the Wrecker was shown in blue with orange equipment (and wider wheels) like the version which apparently was made in Canada a couple of years earlier.

It should be noted that Jeeps using the original three-piece bodies were produced in Canada perhaps as late as 1968. Many of these Toronto-built Tonkas also use the older peened axle ends with washer, but have the newer, deeper hubcaps, which aren't necessary for the washer/peened system. Apparently Toronto was using some new parts shipped from the United States, on bodies stamped using the tooling for the old three-piece assembly. The Canadian bodies do have the circular indentation added inside the front wheel, and have "Made in Canada" stamped in small letters on the windshield.

This results in some unusual variations, including the Jeep at the top of this page, with 1963-style body and 1968-style hubcaps. See Canadian Tonka Toy Jeeps for more photos.

Note: The stamping of the "Jeep" logo on the bodies varies in sharpness, and the plastic Tonka interiors also varied somewhat over the years, with diffferences in the plastic, in the axle holes, and in the details of the rear bed. We haven't yet associated particular dates with these variations.

Thanks to Doug Gagnon for much of the information for this page. Further comments or corrections are welcomed. -- Derek Redmond