Tonka Toys were first produced in 1946 by Mound Metalcraft Incorporated, of Minnesota. The name Tonka was taken from nearby Lake Minnetonka. Their first construction vehicles were introduced at the New York toy show in 1947, and the company added many other pressed-steel toy trucks (and Jeeps) to its line during the 1950s and 60's. 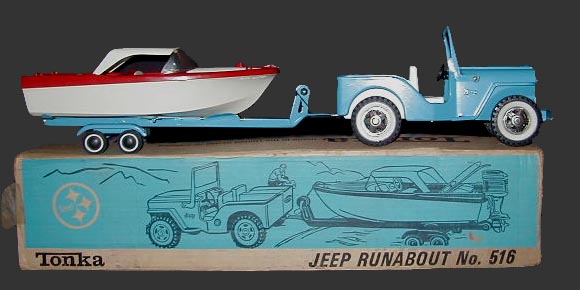 The first Tonka Jeep, a ten-inch-long flatfender, made its debut in 1962 in several versions. Its basic design, in steel with plastic interior, seems to have incorporated features of the CJ-3B Jeep Universal and the DJ-3A Jeep Dispatcher, and was sold under both of those names, as well as the Jeep Runabout (above) and the Jeep Surrey (100K JPEG). 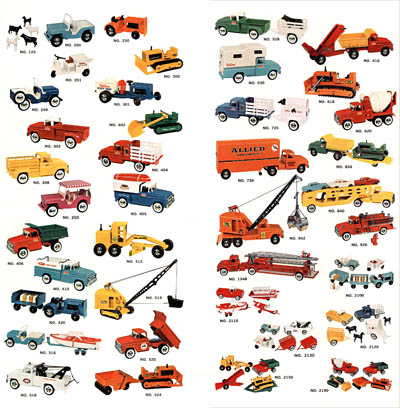 This catalogue image shows the 1962 Tonka line, with the four Jeeps, plus a couple of sets incorporating Jeeps (the No. 2100 Airport Service set and the No. 2150 Super Service wrecker set.)

The flatfender was a hit and was sold in many variations for more than a decade -- see Dispatcher Details: How to Date Your Tonka Flat-Fender. 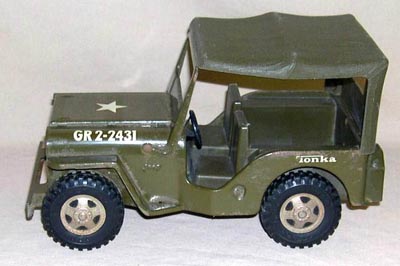 Tonka produced a U.S. Army "Military Jeep Universal" version starting in 1963. The "Jeep Commander" introduced the following year had a plastic canopy. The hood number GR2-2431 is said to have been the Tonka company's phone number in Mound, Minnesota; there was indeed a GReenwood telephone exchange in the area.

For some reason, the hood number was shortened after 1965 to G-2-2431 as seen on a later Jeep Commander (30K JPEG) with white interior and whitewall tires. 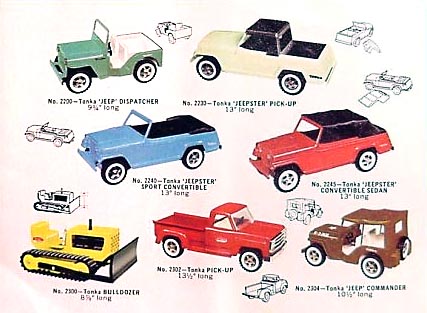 The Tonka Jeepsters, based on the 1967-73 Commando, were larger -- about 12 inches long. This 1970 catalogue page shows several configurations. See Other Tonka Jeeps for more Jeepster photos.

Mike Boyink says: "I've found the best place to buy the older Tonkas is at toy shows and not the antique shops. I found one for $20, and there were a few to be had in that price range. It's not mint, some rust here and there, but it cleaned up pretty well and to me the somewhat rough shape adds to its appeal somehow. Of course after I got it home and showed my parents what I bought, my mom told me she had kept the one from when I was a kid....  Any variations on the toy such as the ambulances, wreckers and fire Jeeps did fetch a much higher price, anywhere from $80 up." 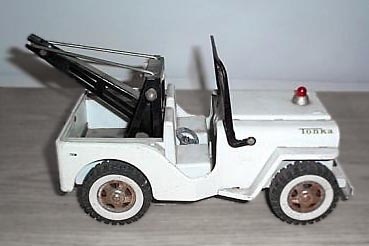 Here's the white wrecker. See a rear view (20K JPEG) showing the "AA" decal. Later wreckers are blue and orange, including most of the ones made in Canada.

An unusual version is the U.S. Army wrecker (35K JPEG). Does anyone have more information on this model? It was possibly part of a set. Photo by Jenni Hypes.

Perhaps the most collectable variation is the Fire Pumper. 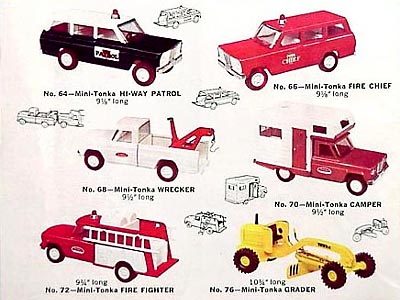 Other emergency vehicles including Police, Fire Chief and Rescue Ambulance, are among a number of Jeep Wagoneer toys produced by Tonka in their smaller Mini-Tonka series, as seen in this 1967 catalogue page. A 1967 advertisement (120K JPEG) from the Milwaukee Journal shows a price of $1.79. See also the Emergency Service Jeep Toys page.

In addition to the camper, wrecker and fire truck, Mini-Tonka versions of the Gladiator pickup included a dump truck, cement mixer and a horse trailer set. See Mini-Tonka Does the Full-Size-Jeep. 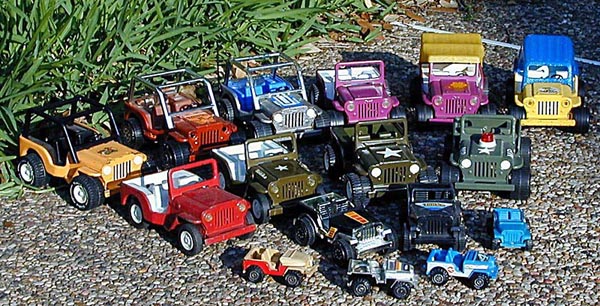 The U.S.-made Mini-Tonka Jeeps also include a six-inch version of the Universal flat-fender, sold in both a stock configuration and a modified version with a plastic roll cage, obviously designed for sandbox racing. This photo by Mike Albright also includes some smaller, less-detailed plastic and toys produced in Mexico, Japan and Hong Kong under the Tonka name.


More Mini-Tonkas: a green fishing version on the Gone Fishing page, and the Coleman Camping Set on the Jeeps in Playsets page. 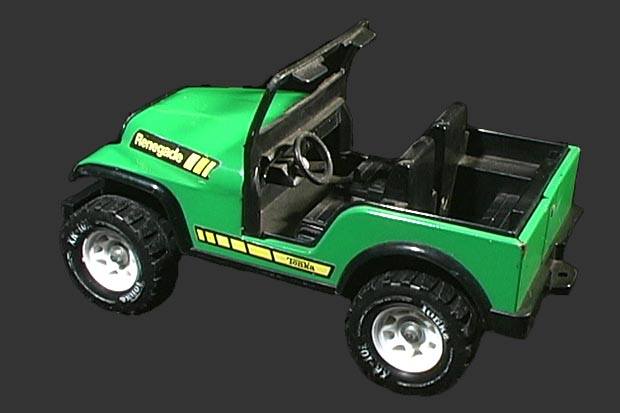 There is a newer ten-inch Tonka Jeep, introduced in the late 1970's and based on the CJ-5. It has a plastic frame, grille and windshield, as well as interior -- only the tub, hood and fenders are steel. It's also found with a plastic hardtop and in other variations. 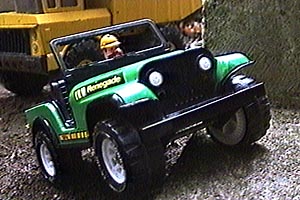 Note: the driver in this action photo from a construction site, doesn't come with the Tonka.

Thanks to Terri Key for the photo of the Runabout with the Clipper Boat, Dan Fedorko for his Jeep Commander, and Butch Cudahy, Bill Kelsey, Mike Albright and Jarek Skonieczny for Mini-Tonka photos. -- Derek Redmond