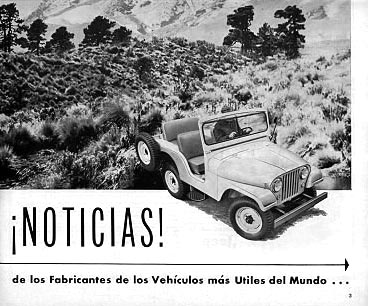 In the 6 December 1954 issue, Willys-Overland Export Corporation announced "News! From the maker of the World's Most Useful Vehicles...."

The news was the introduction of the CJ-5, which apparently soon became the most popular Universal Jeep in South America, unlike many other overseas markets which continued to import and manufacture primarily the CJ-3B.

The following page (50K JPEG) shouts "NEW -- the best Jeep ever built by Willys!" and includes a nice photo of a CJ-5 on a steep hill. And another page (50K JPEG) with several CJ-5 photos including plowing a field, says "Now! Willys offers a complete Jeep. Tougher than ever!". 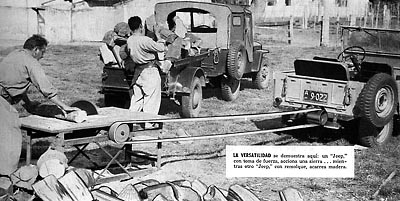 An advertising feature from 11 October 1954 makes use of this old photo showing a pair of CJ-2As cutting and pulling firewood. A drawing made from this photo had been used in a 1948 advertisement (see below).

The feature continues on page 6 (100K JPEG) with photos including the "Camiôn" and "Vagoneta" (Willys truck and wagon), and the headquarters of Ambrois y Compañia, the Willys distributor in Montevideo, Uruguay.

Another interesting older photo, of a Jeep "cleaning an aqueduct," appears on page 7 (100K JPEG), with text celebrating the Jeep as a major method of transportation in Uruguay. 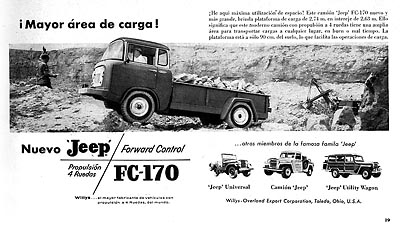 This ad, one of a series in the 4 November 1957 issue of LIFE, advertises "Lots of room for cargo!" in the "new and larger" Forward Control FC-170. Other pages in the same issue carry photos of the truck at work on the farm (Traction for the job!, 70K JPEG) and on a construction site (It goes anywhere!, 70K JPEG).

The CJ-3B does not even appear among the other Jeep vehicles at the bottom of the ad. 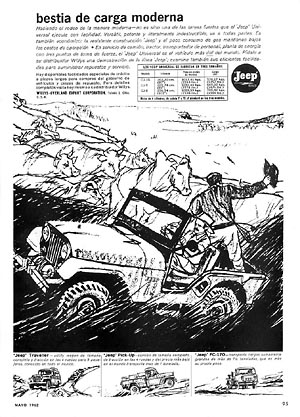 The advertisement at left is from the May 1962 issue of Mecanica Popular, the Spanish-language edition of Popular Mechanics distributed throughout South and Central America from its editorial offices in Florida. This ad for the Universal Jeep does mention the CJ-3B as well as the CJ-5 and CJ-6. It includes an unusual Jeep logo with the words "Kaiser-Willys Motors".

The export division, still known as Willys-Overland Export Corporation, presumably intended the ad to boost sales of vehicles built in the U.S. and exported to countires such as Colombia, but it would also have benefited licenced Jeep manufacturers IKA of Argentina and Willys Mexicana.

The drawings for this ad (see a larger copy, 250K JPEG) and for the other ads below, appear to have been done specifically for the South American market, and the design style is different from Willys' English-language advertising. But some of the text (translated here into English) has a familiar sound:

Modern beast of burden. Roundup the modern way -- only one of the big jobs that the Universal Jeep executes with ease. Versatile, powerful and literally indestructible, it goes everywhere. It is also economical: the rugged Jeep construction and the low gasoline consumption keep operation costs low. In the role of a truck, tractor, transporter of personnel, or energy plant with three power take-off points, the Universal Jeep is the world's most useful vehicle. Hurry to your Willys distributor for a demonstration of the Jeep line; also examine his efficient facilities for spare parts and service. There is special long-term credit available for government purchases of of vehicles and spare parts. For complete details visit your Willys distributor today.

At the bottom of the ad are small illustrations of the FC-170 truck, Willys pick-up, and "Traveller" station wagon. 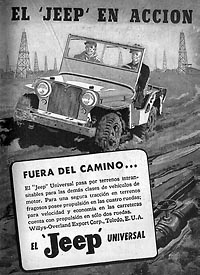 An earlier series of ads in the Spanish-language Selecciones del Reader's Digest in the late 1940's show that Willys-Overland was already working hard to promote exports, which were becoming a major part of Jeep sales. This example dates from the April 1947 issue:

The Jeep in action.

Off road... The Universal Jeep passes through land impassable for most motor vehicles. For safe off-road traction it has four-wheel drive; for speed and economy the station wagon is available in two-wheel drive. 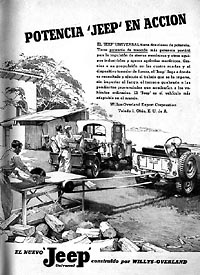 The Universal Jeep has two types of power. It has not only power of traction but also portable power for industrial and agricultural equipment. Thanks to its four-wheel drive and power take-off, the Jeep arrives where it is needed and executes the work that needs to be done, without concern for mud, uneven terrain or steep slopes that stop ordinary vehicles. The Jeep is the world's most adaptable vehicle. 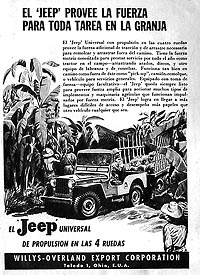 A CJ-3A at work on a banana plantation is featured in this ad from November 1949:

The Jeep provides power for all kinds of jobs on the farm.

The Universal Jeep with four-wheel drive provides the necessary traction and power for towing off-road. It has the driving force needed to serve as a tractor in a the field -- dragging plows, discs, and other farm equipment. It also works as a pick-up truck, tow truck, or general service vehicle. Equipped with power take-off, the Jeep is always ready to drive many types of agricultural implements that require power. The Jeep arrives at places too difficult for any other vehicle.

Luis Mariano Paz, who found the ads in a used book store in Argentina, comments that "These advertisements demonstrate how the economic development of Latin America did not take advantage of the opportunity to grow due to reduced competition from European and other nations that were recovering from World War II."

Thanks to Luis for sending the ads. -- Derek Redmond

See also Willys Ads for Mexico and ads in Spanish for VAM Jeeps in Mexico. Also ads in Portuguese for Jeeps in Brasil.