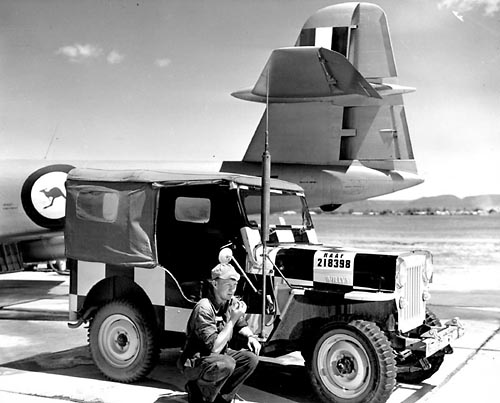 This remarkable set of photos, which was published here on CJ3B.info for perhaps the first time anywhere, shows a CJ-3B Jeep Universal in use by the Royal Australian Air Force as a runway traffic control vehicle. With the Jeep featured prominently, the photos appear to have been taken for promotional use by Willys Motors Australia.

Former RAAF Reservist Ian Hall, who has restored a retired RAAF Jeep, comments that they "could be official RAAF photos as it would be unusual for civilian photos to be taken on a Defence base, particularly on a runway area." Either way, this first photo did find its way into the December 1960 edition of Jeep News (400K JPEG) from Willys Australia.

The photo shows that the Jeep is right-hand-drive and radio-equipped, and features an airman posed as if talking on the radio. (The pose recalls a scene in the 1956 movie Julie.)

The aircraft in the background of the photo above is a British-built Gloster Meteor jet fighter. An earlier version of the Meteor was the only Allied jet fighter to see combat in World War II, and actually intercepted some of the V1 flying bombs launched by Germany into Britain. Meteors entered regular service with the Royal Australian Air Force in 1951 with a true "baptism of fire" when they were taken into action by 77 Squadron in Korea, against the Mig-15.

Alf Blume in Denmark sent us a 1954 photo (160K JPEG) of a Royal Danish Air Force Willys MB in front of the Meteors of 723 Squadron at Aalborg AFB. 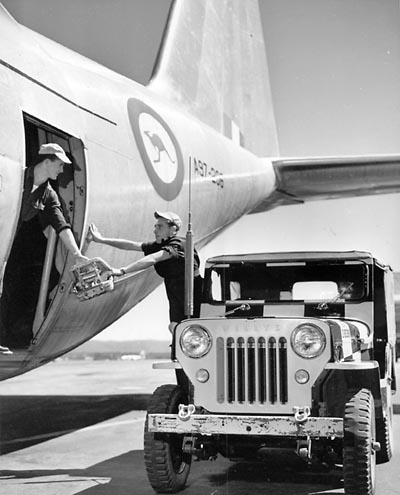 All the aircraft in these pictures have been given the new RAAF Roundel on their fuselage. Formally adopted in 1956, it consists of a red kangaroo in motion, surrounded by a royal blue circle. When the Royal Australian Air Force was formed in 1921 it adopted the existing red, white and blue Roundel of Britain's RAF (seen under the wing of the Hercules in the photo below) to identify its aircraft. However during World War II the inner red circle was removed when an 11 Squadron Catalina was mistaken for a Japanese plane by a U.S. Navy Wildcat.

These photos were taken after Willys Australia began assembling CJ-3Bs in Australia in 1958. Vaughn Becker found the photos, and says, "They have what appears to be a serial number on the back of them, e.g. 1/24578-60. Maybe the 60 is the year but that is a pure guess."

It's a logical guess, as the second photo clearly shows that the Jeep is not brand new, with significant wear on the tires and the front bumper, and one windshield wiper drooping. The only obvious modification to the Jeep aside from the radio and the paint job, is a set of lifting rings on the bumper. 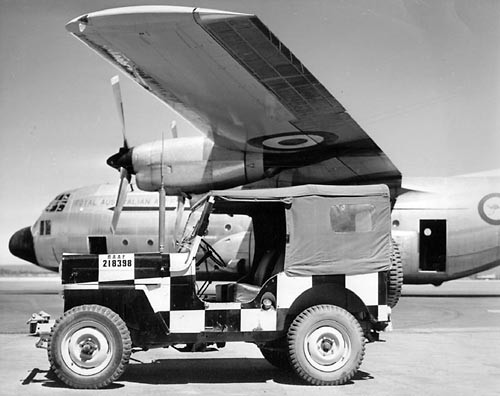 The Hercules in RAAF livery is another factor that clearly dates the photos to post-1958. According to a history of the Royal Australian Air Force, the RAAF bought its first twelve C-130A's in 1958, making it the first overseas customer for the Hercules, built by Lockheed in the U.S. Those original C-130A's were withdrawn from use in 1978, being replaced by 12 C-130H's. Twelve C-13OE's had also been delivered starting in 1966, and as of 2004 new 130J's have now replaced the 130E's. 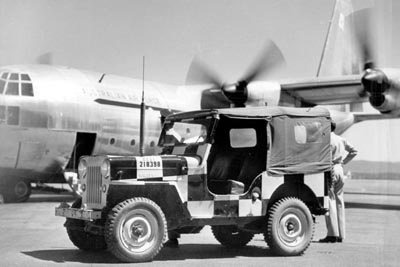 So the Jeep and the Herc probably arrived new at this base at about the same time. The large base known as RAAF Amberley, near Brisbane where the Willys factory was located, is probably where this photo session took place. Ian Hall says, "the other possibility is RAAF Richmond west of Sydney, where the Hercules Squadrons are based, but from the background I would guess Amberley."

Ian also mentions that RAAF modifications included putting the spare wheel on the rear. Most of the Jeeps would have been painted a blue-grey, but the checkerboard pattern on this example was yellow and black. The soft top was apparently the original grey canvas. 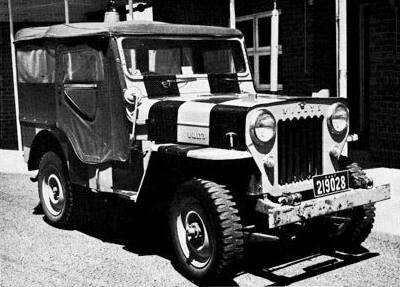 This photo is taken from an RAAF sheet of specs for the Truck, Utility, 1/4 ton, Air Traffic Control (150K JPEG). The sheet gives basic specs for the Willys Model CJ-3B (1959) and lists the following modifications: lamp revolving red, two-way radio, and illuminated "Follow Me" sign. It doesn't mention the checkerboard paint.

The example in the photo has paint slightly different from the Amberley photos -- black grille slats rather than yellow. It also appears to have its radio antenna on the left side, and a revolving light on the left rear corner. None of the photos show the "Follow Me" sign.

(One of these 1958 models may be the Jeep being examined by officers in a photo taken at the Willys plant in Brisbane; see "A Visit From the RAAF" in Building 27 on CJ3B.info.) 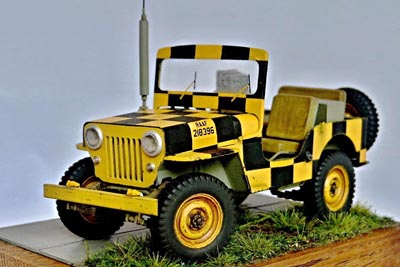 MMK Models in the Czech Republic produced a 1/35-scale Model Kit in 2016, based on the Amberley photos. There are a few minor inaccuracies including an incorrect hood number, but it's a nicely detailed model. See M606 Model Kit by MMK in the "Toy Jeeps Pages" of CJ3B.info. 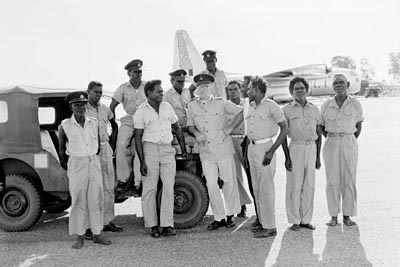 According to records in the National Library of Australia Digital Collections, this photo found by Mick Broomfield dates from 1 May 1962. Apparently taken at an air base, it's part of a series of photos of Catholic Missions in the Northern Territory, taken by John Mulligan (1927-1996). It shows Father Frank Flynn surrounded by a group of aboriginal men, with a CJ-3B which is possibly another RAAF Jeep.

Ian Hall comments that, "According to his biography, Frank Flynn (1906 - 2000) was not only a priest but also an eye specialist and had a lot to do with the treatment of the eye disease trachoma common in the Northern Territory.

"During WW II a series of RAAF bases were built leading south from Darwin along the highway. The photo could be at any one of these, but my guess is Darwin as Flynn was based there. In 1962 he was the Catholic Church Administrator in Darwin as well as Chaplain and Ophthalmologist to the RAAF with the rank of Wing Commander.

"Flynn appears to have the correct RAAF officer's summer uniform which was beige during the 1960s. I am doubtful that the aboriginal gentlemen are official RAAF members -- the uniforms vary and some have no shoes. More likely to be police, government patrol officers or Catholic Mission personnel.

"The CJ-3B is likely RAAF but it is hard to tell. The front wheel appears to be a combat rim as per MB Jeeps. During the 1960s and 1970s the RAAF purchased their own vehicles and did not use the Land Rovers as used by the Australian Army. I recall during my national service training in the RAAF in 1972 seeing a training film featuring a RAAF CJ-3B and an International Scout." 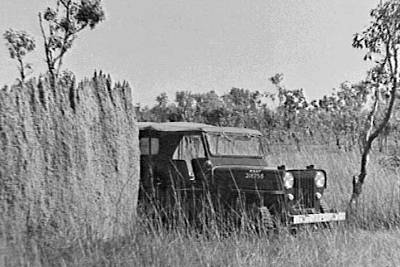 Another photo from the Northern Territory dates from 1959, when this CJ-3B with hood number 218758 and apparently painted in RAAF blue, would have been brand new. The picture showing the Jeep parked beside a large termite mound was taken by Ron Melton, possibly at Darwin or alternatively Base Tindall, approximately 320km southeast of Darwin. Both bases were established during the Second World War.

The photo was found by Mick Brooklands at Library & Archives NT, and is under CC 4.0. 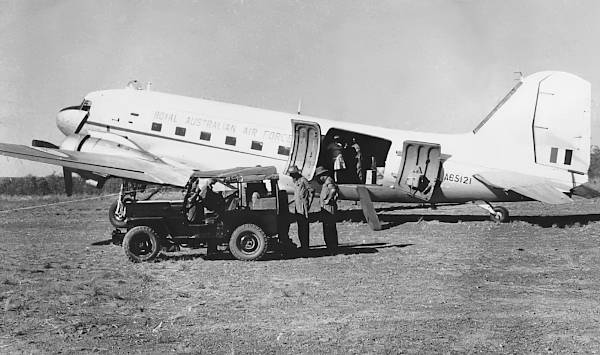 This CJ-3B is seen with a Douglas C-47B Dakota, RAAF serial number A65121. According to RAAF Serialled Aircraft, the C-47 was delivered in July 1945 to No. 36 Squadron, a strategic transport squadron involved at the time in the New Guinea and Bougainville campaigns (Wikipedia). The photo was taken in 1970, probably at RAAF Base East Sale in Victoria, as the Dakota was being prepared for transfer to Indonesia as a navigation trainer.

Thanks to Mick Broomfield. 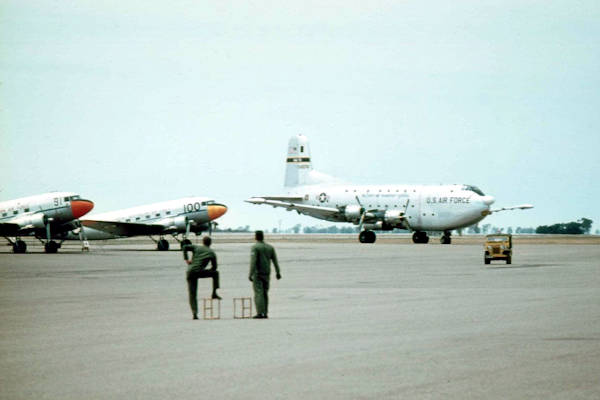 Two more Dakotas keep an eye on their younger cousin from Douglas Aircraft, a Military Air Transport Service C-124 Globemaster II, arriving at East Sale on a warm day around the same time period. The "Follow Me" Jeep coming across the tarmac has its ventilating windscreen cracked open. This 3B appears to be painted all yellow, with its red beacon mounted to the top of the windscreen.

See also an RAAF CJ-6 Jeep (100K JPEG) carrying officers on parade. It appears to be a dark blue. Don Glindemann comments, "This Jeep was at RSTT Wagga (RAAF School of Technical Training) and used by the Air Officer Commanding to inspect the troops on the parade ground. It was only ever used once while I was there for two and a half years. Someone scored a very low mileage unit at the end of its career."

Return to CJ-3B and M606 Military Jeeps or to Jeeps in Australia.