Colombia, 1965:
First Vehicle on the Farm 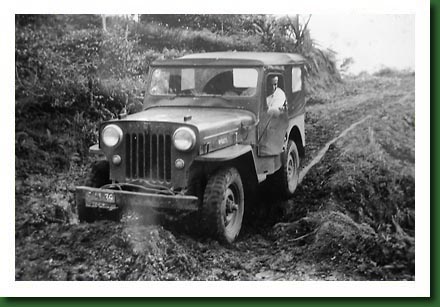 La Flecha Farms, about two hours by car south of Bogota, Colombia, near the small town of Mesitas del Colegio, was for a century accessible only on horseback. After leaving your vehicle just outside town, it was a rough ride of an hour and a half by horse or mule up into the hills.

These remarkable photos sent by Sergio Arango show the day when all that changed -- the day his Uncle German, then 24 years old, arrived at La Flecha in his 1954 Willys CJ-3B. 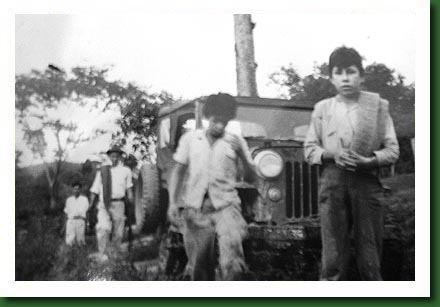 Everybody came for a look at the Willys, and the camera attracted some attention too.

The photographer got a wider shot (60K JPEG) showing the surrounding hills, and a low angle front view (60K JPEG) revealing the air horn on the front right fender of the Willys -- probably useful for moving mules out of the way on the trail. 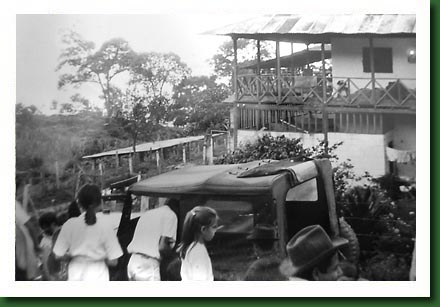 All the kids got a good look at the Jeep when German pulled right up to his friends' 100-year-old farmhouse. There's also another view of the house (60K JPEG) which shows the same little guy from the picture above, still staring at the camera. 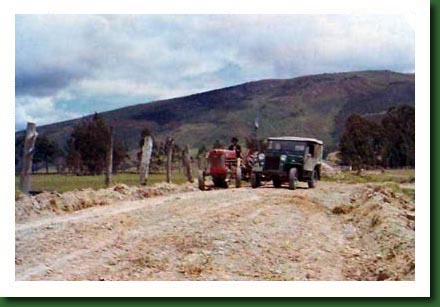 German owned the '54 for a few more years after that big day. This photo was taken on the Arango family farm north of Bogota, when Sergio Arango was a small boy. It's almost the exact same location where over forty years later, Sergio photographed his own CJ-3B (50K JPEG).

Young Sergio and his brother had a Land Rover pedal car (50K JPEG), but he says, "I liked more my Uncle German's Jeep, seen here at my father's house. I remember it was very pretty, emerald green, always very dirty with a canvas top and very hard to get in -- I was only four years old. My uncle would warm up the Jeep while he was taking his breakfast every morning. I think that's why I wanted a CJ-3B." 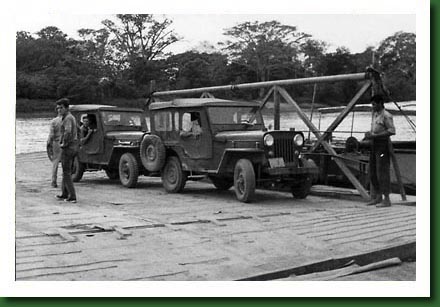 German had a few more adventures in the Willys. These two photos were taken on a trip through the jungle about six hours east of Bogota in 1966. His Jeep crossed the Meta River on a wooden ferry along with another 3B -- his is the one with the air horn still on the fender. 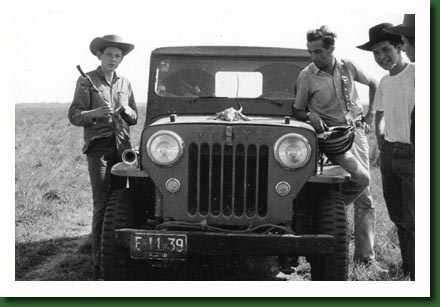 A little closer to Bogota, near the city of Villavicencio, German posed for a photo wearing his "carriel" over his shoulder, and letting a small alligator bask on the warm hood of the Willys.

He sold the Jeep after a bit of a crash off a bridge in 1968, but he's still alive and enjoying his nephew Sergio's CJ-3B (see Willys on the Farm in Colombia).

Thanks to Sergio for sending the old photos. -- Derek Redmond

Return to Jeeps in Colombia or the index of Unusual Photos on CJ3B.info.

Last updated 4 May 2006 by Derek Redmond redmond@cj3b.info
https://cj3b.info/World/Colombia1965.html
All content not credited and previously copyright, is copyright Derek Redmond