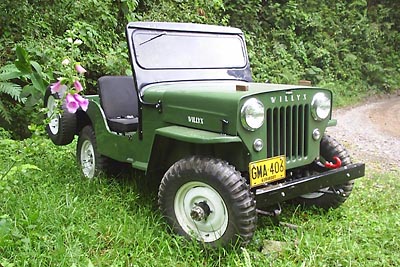 "On December 22, 1954 the Jeep was imported to Colombia by Leonidas Lara e Hijos, the company which imported many of the Jeeps that are working now in the coffee area in the country. It served as their manager's Jeep in Girardot, a small city near Bogotá, going into service on June 28, 1955." 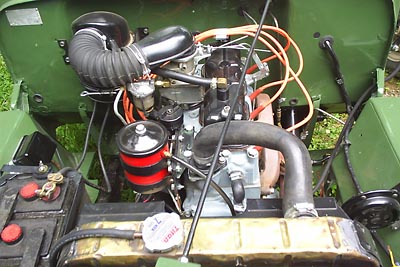 The engine compartment is very clean and original, although Miguel chose to paint the block grey rather than black. See also a left side photo (70K JPEG) of the engine during reassembly. 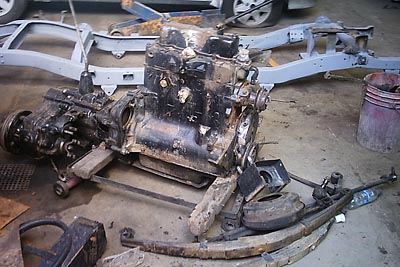 Here the frame has been reconditioned, and the engine is ready for rebuilding. See also the tub being sanded (80K JPEG).

Miguel notes, "This CJ-3B was also used by mechanics from Leonidas Lara e Hijos. One of them was a Mr. Jaramillo (he became the second owner in September 1971) and he used to repair the engines of those big Caterpillar machines. The Jeep was the vehicle used to transport the heavy engines from the field to the shop, so the chassis was reinforced with steel plates to avoid the damage caused by those weights." 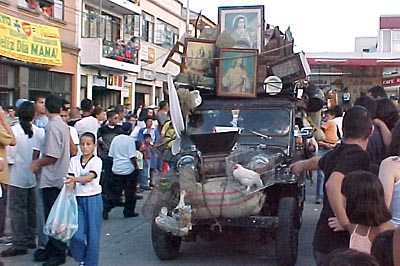 The ability of Willys Jeeps to carry loads beyond those for which they were really designed, is much-admired in Colombia. The working Jeeps of the coffee producers show their prowess by carrying huge loads in annual parades like this one at the Yipao festival in Sevilla, just across the mountains to the west of Girardot. A toy Jeep loaded with possessions (60K JPEG) is a popular souvenir at the festival. 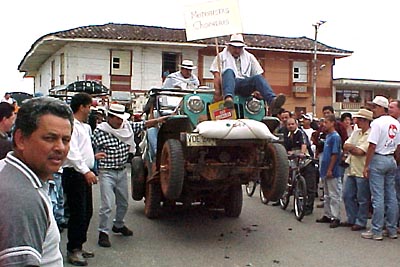 Farmers compete to show how much their Willys can carry, and piling enough bags of coffee beans on the back to raise the front wheels off the ground, as these "motoristas" in Sevilla are doing, is a popular stunt. And a restuarant north of Bogotá has a heavily loaded Willys embedded in its front wall (100K JPEG).

See also more parade photos from nearby Armenia, in Yipao: The Willys Festivals of Colombia. 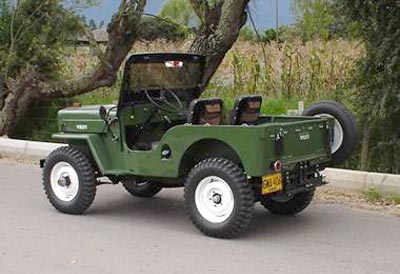 This is one Willys that's likely to have things a lot easier now in its retirement, after some 91,000 kilometers on the odometer (70K JPEG). Miguel says, "I restored it last year; it took 4 months and very hard work but finally it has changed to what I call my 'new old Jeep.' And my Jeep is now a member of Willys Colombia."

Thanks to Miguel for his photos, and to Hernan Castro for the restaurant photo. -- Derek Redmond

Also on CJ3B.info, see the CJ-3B which was right in front of Miguel's Jeep on the assembly line in Toledo in 1954: Willys Alberto Sevillano.

Return to CJ-3B Owners and Photos.