Here's a rare look at some rare high-hood Jeeps, in use by the French army during 1957-58 in Algeria, which had been a French colony for over a century. A guerrila war of independence by the National Liberation Front (FLN) had begun in 1955, and by 1962 the Algerian War would result in the death of 25,000 French soldiers and hundreds of thousands of Algerians. (See Algerian War at Wikipedia.) It could be called France's Vietnam War, except that France had already been driven out of Vietnam in 1954. The Armée de Terre ("land army") wasn't in the mood for a military defeat by another colony. The war is still widely studied as an example of strategy in insurgent warfare.

In 1957 the French thought that trying to win the "hearts and minds" of Algerians might be a good strategy, and this was the subject of a short propaganda film called Képi Bleu ("Blue Caps") produced by the Service Cinématographique des Armées. 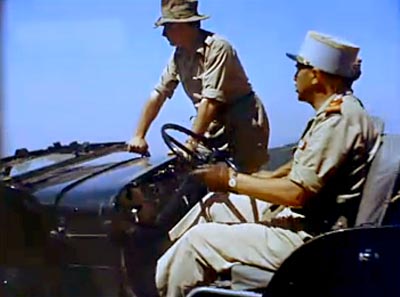 Wikipedia describes the role of the French blue cap officers: "The French army took an important role in local Algerian administration through the Section Administrative Spécialisée (SAS), created in 1955. The SAS mission was to establish contact with the Muslim population and weaken nationalist influence in the rural areas by asserting the 'French presence' there. SAS officers -- called 'képis bleus' (blue caps) -- also recruited and trained bands of loyal Muslim irregulars, known as harkis. Armed with shotguns and using guerrilla tactics similar to those of the FLN, the harkis, who eventually numbered about 180,000 volunteers... were an ideal instrument of counterinsurgency warfare." 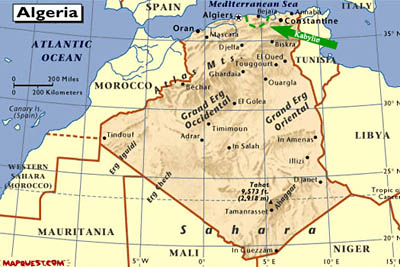 The film Képi Bleu was shot in the capital city of Algiers, and in the Kabylie region to the east of the capital (green arrow on the map.) Kabylie stretches about 100 miles along the Mediterranean coast and about 50 miles inland. The mountainous region had been the last stronghold against French colonization in the 19th century. The history of French repression in the area, and the rough terrain, made Kabylie a key region in the Algerian War, and several historic leaders of the FLN came from the area. 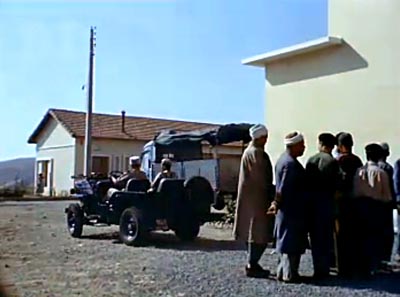 The film shows a blue cap SAS officer heading out to a rural village in his black Jeep. It's a nice example of the JH-101, a version of the CJ-3B built by the French company Hotchkiss under licence from the Kaiser Corporation. 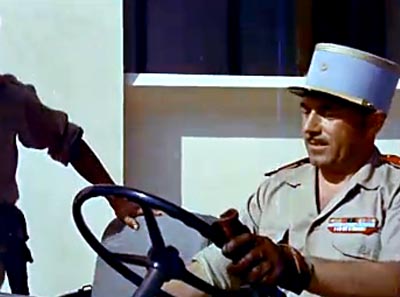 The narration says the blue caps "represent France," even in the most remote parts of Algeria. They "lead the army" with a peacekeeping mission to fraternize and reconnect with the people, and to revive the reconstruction of schools, roads and stadiums using local workers. 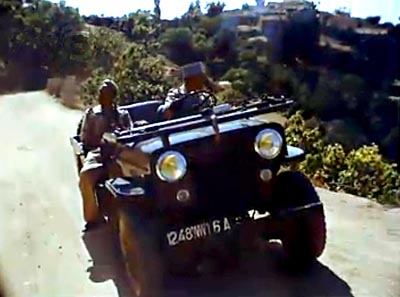 There are some great shots of the blue cap officer and his Algerian adjutant in the JH-101 on mountainous country roads.

Hotchkiss Jeep built very few of its JH-101 version of the CJ-3B, concentrating instead on its updated M201 version of the Willys MB (see Jeeps in France on CJ3B.info.) About 3,500 of the high-hoods were produced between 1954 and 1960. Other than the fact that many actually had the old L-head "Go Devil" engine also used by Hotchkiss in the M201, the JH-101 had only minor differences from the Willys 3B. 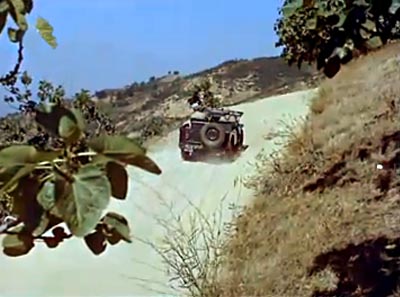 The film goes on to say that sometimes regular visits to the villages are an opportunity to bring a nurse or doctor who provide routine care to residents. "Optimistic and dynamic," and popular with most of the population, these officers are sometimes threatened with death by rebels and must be protected. In this conflict between the devastating rebel bands and the desire of France to modernize Algeria, the action of the blue caps "strengthens the link" between the Algerians and the state.

The prolonged war of independence, with brutality and heavy casualties on both sides, had a profound effect on French society. Frustrated by the lack of political support, the French army in Algeria seized power there in May 1958 and threatened to invade France itself and remove the government. This triggered the rise to power of former military hero Charles de Gaulle, who then held a referendum on a new constitution, under which Algeria would be less tightly controlled.

A LIFE magazine article on the referendum published on 29 September 1958 didn't include any of the photos below by Loomis Dean, but Federico Cavedo spotted the Jeeps in them, in the LIFE archive at LIFE.com. 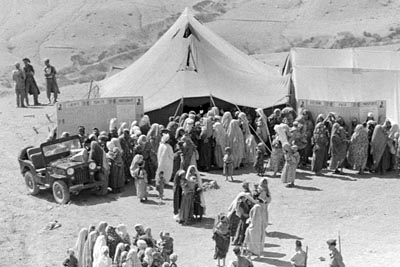 This shot shows what may be another blue cap JH-101, parked outside a polling station where a crowd of Algerian women and children are gathered under the watchful eye of a couple of French soldiers,. According to Wikipedia, "The FLN mounted a desperate campaign of terror to intimidate Muslims into boycotting the referendum. Despite threats of reprisal, however, 80 percent of the Muslim electorate turned out to vote, and of these 96 percent approved the constitution." 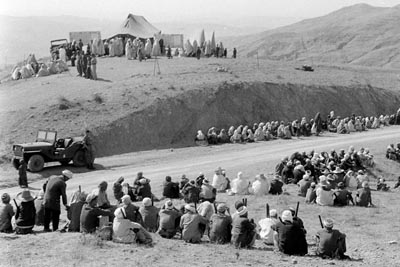 In the background of this photo is the same tent and Jeep seen above, but many Jeep fans are going to do a double take when they see the other high-hood vehicle parked on the road: "What the heck is that?"

See the larger copy of the photo (180K JPEG) for a closer look at an interesting footnote in Jeep history: the Delahaye VLRD (Voiture Légère de Reconnaissance Delahaye or "Vehicle, Light Reconnaissance, Delahaye.") 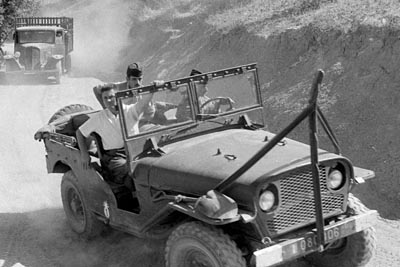 A better view of another Delahaye, equipped with a booby-trap-wire cutter, identifies it as the 1953 version of the VLRD.

It would be easy to dismiss the VLRD as an overseas knockoff of the Willys CJ-3B, except for the fact that it was designed in 1948, and had adjustable independent torsion bar suspension, 4-speed synchromesh transmission, differential locks, aluminium engine, and 24-volt electrical system. Reportedly 9,623 of the Delahaye "jeeps" were produced, but very few survive. 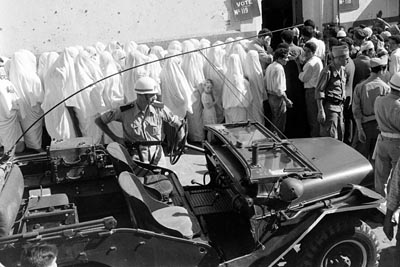 Delahaye got the contract to develop a new jeep for the French army in 1947. Their prototype "Delta" was tested, revised and finally adopted by the army in 1951 as the VLRD. However, its sophisticated design and a lack of adequate maintenance in the field led to breakdowns, and a lack of driver training on the diff locks led to accidents. The 1953 model had changes including a new differential control system, but problems remained, and a new 1954 prototype was rejected by the army. Hotchkiss bought the Delahaye company, and the army ordered their M201 instead. See more details on the Delahaye Jeep Story at Andy Carter's French Military Jeep Site.

The fact that the blue cap in the Képi Bleu film drives a black JH-101 instead of an olive drab M201 or VLRD, suggests that the army was perhaps trying to distance their blue cap SAS officers from the nasty image that the French army may have had in some parts of Algeria. 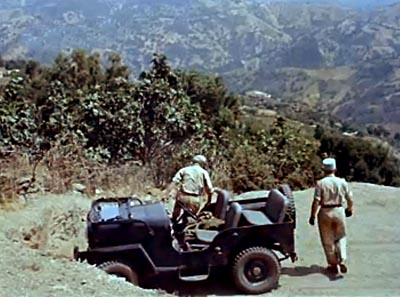 Today, Gouraya National Park and Djurdjura National Park are located within the Kabylie region, and when you see the scenery in the film it's not hard to understand why.

Here the blue cap walks down to a village nestled on the hillside below the road. 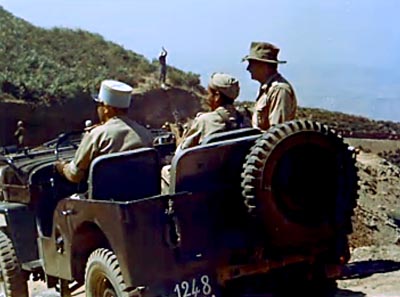 The rear-mount spare was typical on the Hotchkiss Jeeps. Other details visible on the JH-101 here include a marker light on the left side behind the driver's door, and a rotary switch on the dash. 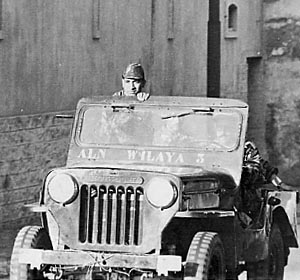 This photo from the Borgé and Viasnoff book La jeep en 300 histoires et 150 photos shows a JH-101 captured and put into service by the ALN (military wing of the National Liberation Front, FLN) who continued to fight the French until full independence was finally granted in 1962.

The inscription "ALN WILAYA 3" on the windshield has nothing to do with "Willys"; the term refers to the 7 command divisions of the ALN. The bumper still shows French white markings, and in fact the crew are also wearing French "Leopard" camo fatigues and "Bigeard" caps (named for paratrooper Colonel Bigeard, one of the French heroes of Dien Bien Phu in Vietnam, and a commander in Algeria.)


Thanks to Federico Cavedo for finding the film, and the photos from the LIFE archive at LIFE.com. -- Derek Redmond

Return to M606 Military Jeeps or to CJ-3Bs in History.

See more Jeeps in France and more Jeeps Around the World on CJ3B.info.