For many years, the only real evidence I had come across regarding the possible assembly of CJ-3B Jeeps in Israel, was the fact that in Iceland, 3B's are known as "Israel Jeeps", pronounced as "Israelsyeppi" in Icelandic.(1) It remained a mystery why Iceland might have imported Willys Jeeps from such an unlikely source. And if it was true, why had we never seen any photos of 3B's in Israel? 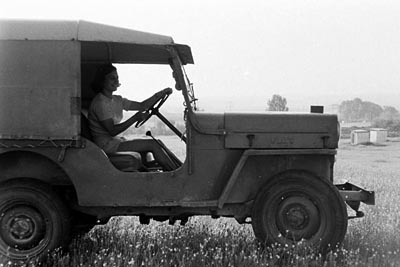 Federico Cavedo then found a 1959 LIFE magazine photo shoot featuring Yaël Dayan, daughter of Israeli General Moshe Dayan, driving a Willys CJ-3B (see Jeep Spirit on CJ3B.info.) It shows an interesting Jeep, with some unusual details including locking hubs on the rear. But it certainly wasn't enough to convince me that Israel had produced enough 3B's to be exporting them.

Well, I have now started to piece together from several sources (see footnotes and acknowledgements at the bottom) the story of the origins of Israel's Jeep factory, and what happened to the thousands of Jeeps it produced over a period of nearly 30 years. 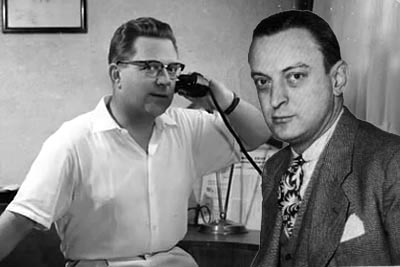 The Kaiser-Frazer automobile plant built in the Netherlands in 1947-48(2) was one of the first major overseas deals negotiated by Kaiser vice president Hickman Price (on the right in this composite photo). Price was then heading for Greece to explore establishing a factory there. But he met first with American-Israeli businessman Efraim Ilin (left), who had watched Henry Ford announce that Ford vehicles would be built in the brand new nation of Israel, only to back down when threatened with an Arab boycott. Like Ford, Efraim Ilin knew not only that Israel would need a lot of vehicles, but also that the young country badly needed industry to train its workforce and produce goods for export.(3) 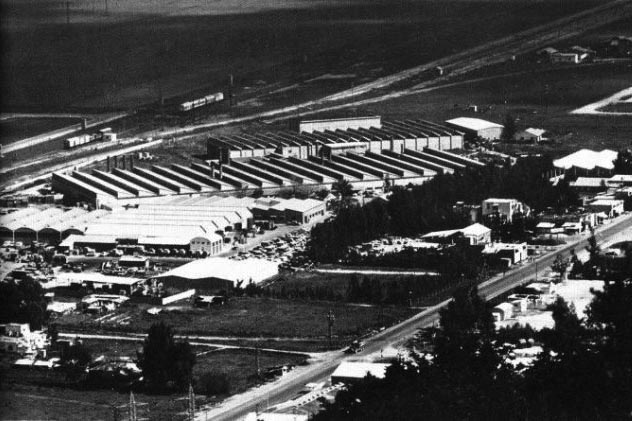 Ilin and Price swiftly came to a deal, and the result was the massive Kaiser-Ilin Industries automobile plant built in Haifa in 1951 (right). Ilin would go on to have disagreements with the Israeli government, and eventually sell his interest in the company, but he was a major force in developing the country's economy.(4)

Meanwhile, Hickman Price became president of Willys Overland Export Corp. in 1952, and vice president of Willys Motors in 1954 (180K JPEG). He established other overseas operations including Willys of Brazil. Price was also an influential political figure and a supporter of John F. Kennedy, for whom he provided advice on Latin American relations. He served as Assistant Secretary of Commerce from 1961-63. (5)
The Kaiser-Ilin plant started to build Jeeps in 1953, shortly after the parent company Kaiser acquired Willys-Overland. Estimates based on government records suggest in fact that over 2,100 CJ-3Bs were assembled there, mainly between 1953-55. But understanding the desperate need for exports to pay for imports, even including fish from Iceland, helps to explain why all or most of those Jeeps were apparently sold to other countries. It's not clear exactly how much local content was included in the Israel Jeeps, but it must have been substantial in order to make the process profitable. It included painting, assembly, tires, battery and upholstery, and thus stimulated a number of other industries.(6) 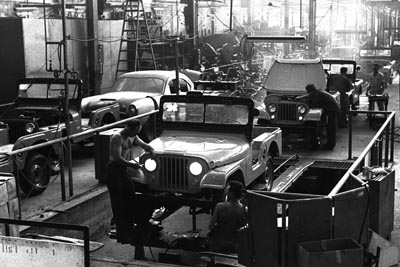 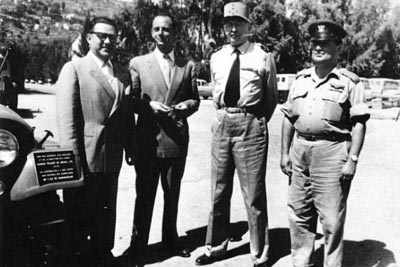 Efraim Ilin (left) is seen here circa 1957, apparently announcing Jeep deals with civilian and military representatives from various countries, including a French military officer. France has been listed among Kaiser-Ilin's customers, although it would seem surprising that they were in the market for Jeeps, since the French Army typically ordered Jeeps from its domestic licensed manufacturer, Hotchkiss. 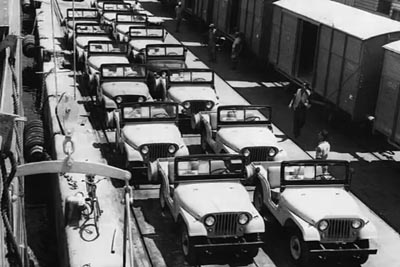 This photo shows an order of Israel-built CJ-5 Jeeps at dockside in Haifa, ready for loading. In addition to France and Iceland, countries listed by Ilin as automobile customers included Argentina, Brazil, Colombia, Turkey, Sweden, Finland and South Africa.(7) They may not all have been Jeep sales, but a photo dated 1968 does appear to show Ilin making a Jeep deal with Colombia (50K JPEG). Apparently his success came through creating export relationships with countries before the American parent company established local offices or plants there.(8) 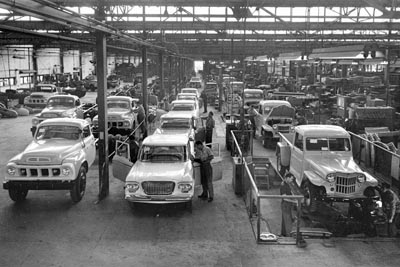 Some Willys trucks and station wagons were also built during the 50's and 60's, and pickups are seen here on the assembly line in 1960, alongside Studebaker trucks and automobiles. Photo courtesy Vaughn Becker. 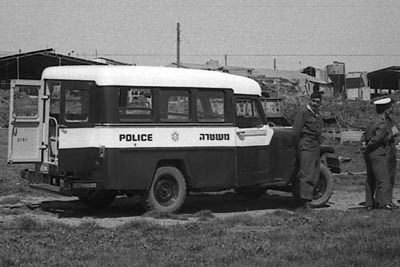 There was a big market for two-wheel-drive Sedan Delivery wagons and 4x4 Cab & Chassis trucks (over 3,000 units of each.) The cab & chassis version could be used to produce vehicles such as this Israeli police van. (Image courtesy Israel Motor Industry.)

When the government reduced tariffs on imported vehicles in 1962, Ilin introduced a cheap, stripped-down version of the pickup truck, known as the "Willys Compact." It was successful domestically, selling 398 units in 1964, representing 41% of total sales that year.(9) 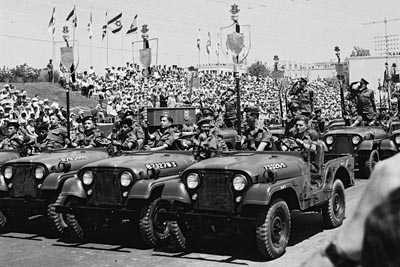 This undated photo shows the Israeli Army using M38A1 Jeeps, or possibly the militarized CJ-5 known as the Kaiser M606A2. It's not clear whether these were assembled at the Haifa plant. 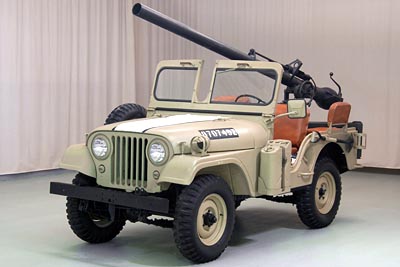 This 1963 M606A2, restored to how it may have appeared with the Israeli Army during the "Six Day War" in 1967, was offered for sale by Hyman Ltd. Classic Cars in 2011. It carries a Kaiser Toledo serial number plate (100K JPEG), with nothing to indicate it was assembled in Israel.

This example is fitted with a deactivated M70 106mm recoilless rifle with deactivated fixed 50mm targeting gun mounted above it. See also an interior view and rear view (100K JPEGs).

Haifa-built CJ-5s are still seen on the road in Israel. While it seems that virtually all the Israeli CJ-3Bs were exported, a larger percentage of CJ-5 production appears to have been sold domestically, both to civilians and to the government. 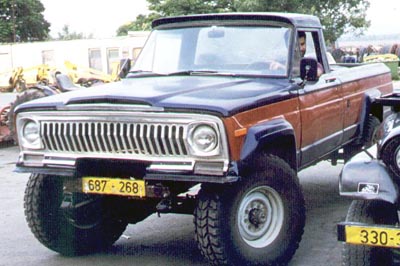 In the late 1960s through the late 70's, some full-size Jeeps were produced, mainly Gladiator trucks (over 700 units.)

It's interesting to find out that Israel does in fact have a long history of building Jeeps, particularly since the Israeli Defense Forces is still using the Jeep-based Storm vehicle, built under license by AIL in Israel.

Elsewhere on the web, see the Israeli CJ and Storm Club.