The drawing above, by Gen Satoh (© 2000), shows the CJ3B-J4 military version of the CJ-3B, built under licence by Mitsubishi in the 1950s. Almost identical mechanically to the Toledo-built CJ-3B, it does show some detail differences, including the rifle holder beside the steering wheel, and the location of the spare tire and the battery.

To really enjoy the details, you need to look at a larger version (300K JPEG). 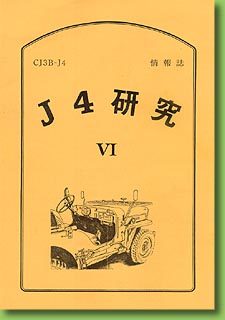 The drawing was originally published in issue 6 of  J4, an annual Japanese journal devoted to the CJ3B-J4. Many of the articles also provide detailed historical and restoration info relating to other Mitsubishi variations of the Jeep, and to the Willys 3B and M606.

Issue 6 of J4 also included material on the version of the J4 built to mount a 106mm recoilless rifle. Page 34 (100K JPEG) shows the folding clamp behind the windshield which secures the gun barrel while driving. The text is all in Japanese.

Other articles in issue 6 have photos comparing the details of the rear floors of various Willys and Mitsubishi models, and different versions of the T90 transmission. 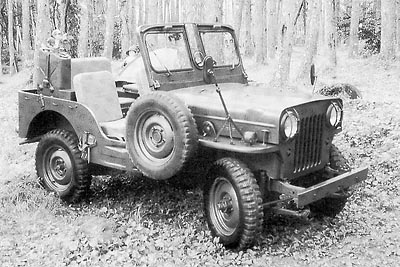 Issue 7 of J4, published in late 2001, includes some 30 pages on the J4M recoilless rifle Jeeps, which feature a cowl-mounted spare tire to increase clearance in the rear, and a windshield with front hinges and an opening in the middle for the gun barrel. 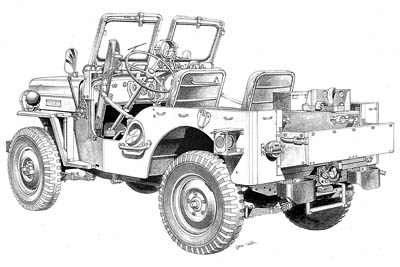 There are more of Gen Satoh's detailed drawings in issue 7. This J4 set up for recoilless rifle has the spare tire mount moved to the left side, like the J4 ambulance. 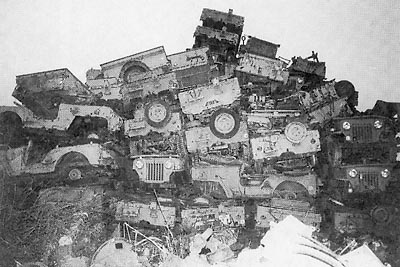 Many photographs in issue 7 come from an incredible odyssey through junkyards filled with surplus Mitsubishi Jeeps. There are also articles about details including springs, frame rivets, and the differences between the M38 and CJV-35U. 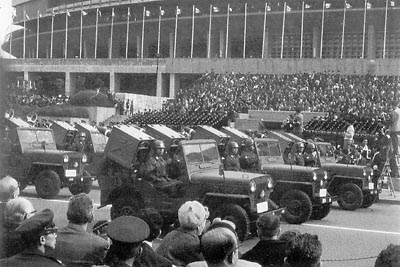 There are photographs of the J4 in active service, including this J4P variant carrying Type 64 anti-tank missiles, in a parade by the Japan Ground Self Defense Force.

Thanks to Morihisa Ochi for providing the copies of J4. For information on ordering J4, contact Mori at mutt@sage.ocn.ne.jp. -- Derek Redmond