The 40-year story of the production of Willys, Kaiser and AMC Jeeps in Mexico is not well known, largely because the volume of production was always pretty low. But it has some interesting details, including the first "AMC Jeeps" which were built there years before American Motors acquired the Jeep name in the U.S.

Willys Mexicana S.A. was set up in 1946 as a Mexico City dealer for Willys-Overland Jeeps, and by 1950 they were assembling Universal Jeeps, station wagons and pickups in a small facility. Production figures were small, but there are still some early flatfenders to be seen in Mexico. 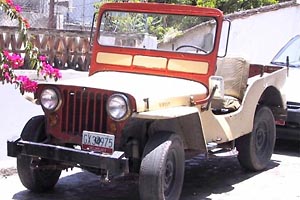 
The Aero-Willys passenger car was soon dropped in a decision by Kaiser in the U.S. to get out of the passenger car business, but the demand for Jeeps was not great enough to keep the new Willys Mexicana plant busy. Rather than continuing to produce the Aero independently (as Willys do Brasil was able to do), the company decided to obtain franchises for the assembly of other makes, which eventually led in 1960 to an arrangement to build and sell AMC Ramblers (20K JPEG). 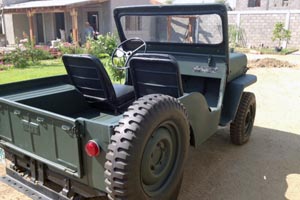 This 1953 CJ-3B was for sale in Veracruz in 2010. It appears to be quite original, but the taillights (100K JPEG) and their location are unusual. I'm not sure if this is a feature of the Mexican assembly, or a later modification. 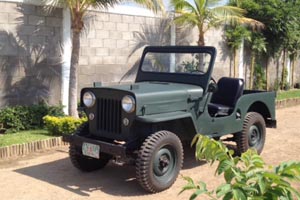 Another interesting detail on this CJ-3B is the rectangular vent or hatch on top of the cowl, just in front of the windshield (see a front view, 100K JPEG). More details on Universal Jeeps assembled by SOMEX would be welcome. 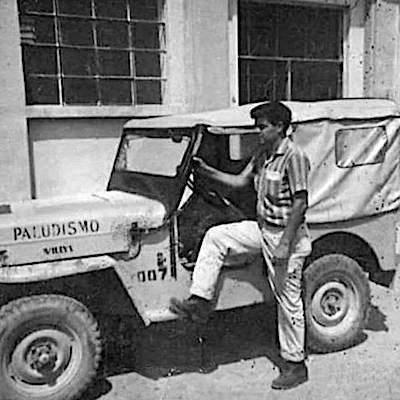 This yellow CJ-3B was photographed in Guerrero state, circa 1961, in use by the Secretaria de Salubridad y Asistencia Para el Paludismo, the Ministry of Health's anti-malaria campaign in rural areas.

Photo courtesy Fernando Ramirez, and Luis Ruvalcaba, who says some of those yellow 3Bs are still on the road. He has one with a dash plate indicating "This equipment was provided by the World Health Organization, the United Nations." This would likely indicate the Jeeps were not assembled in Mexico. 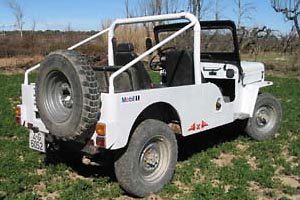 Protective legislation in 1962 limited importation of most makes, and required 60% local content in vehicles assembled in Mexico. In the early 1960s Willys Mexicana was building about 2000 Jeeps and 1000 Ramblers per year, as well as some 2000 other vehicles including Peugeots and Datsuns.

A full range of Willys vehicles was apparently built in Mexico City. This long-wheelbase CJ-3B was seen for sale in Mexico in 2002, but its unusual taillights appear very similar to the Spanish-made Jeep Avia so this may be an import. 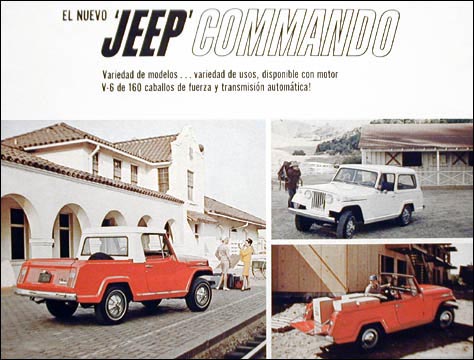 Willys Mexicana's parent company SOMEX became government-owned in 1963, and negotiated a new joint arrangement with American Motors Corporation and Kaiser Corporation to form Vehiculos Automotores Mexicanos (VAM). The new company introduced the J-series Wagoneer and Gladiator pickup in 1965, and later the Jeepster Commando. VAM also expanded by opening a new engine plant in Lerma in 1965, and by 1966 were able to increase local content by putting the AMC engines produced there into the entire Jeep line (232 6-cylinder in the J-series, and 199 6-cylinder in the CJ's). These could be called the first "AMC Jeeps." 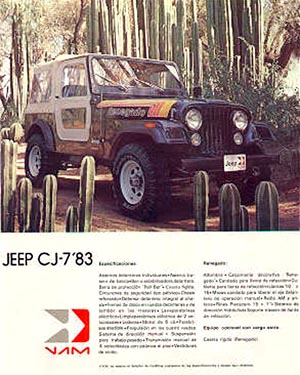 VAM's production of Jeeps declined to just over 1000 per year in the late sixties however, while Rambler figures climbed to nearly 10,000. (VAM continued to use the respected Rambler name into the 1970's for their version of AMC models such as the Hornet, 50K JPEG.)

Jeep sales went up again through the seventies and early eighties, and VAM was looking forward to introducing the upcoming XJ Cherokee. In 1982 they received a prototype XJ, and the engineering department managed to fit VAM's straight six into it, in place of AMC's intended four-cylinder or optional small V6. AMC was impressed by the project, which they shipped back to the U.S. and eventually developed into the 4.0-liter engine which appeared in AMC's 1987 Cherokees and remained as Chrysler's most popular engine for XJ's and Wranglers. Along with the many Mexican-built Jeeps still on the road in that country, the 4.0 must rank as VAM's greatest legacy. 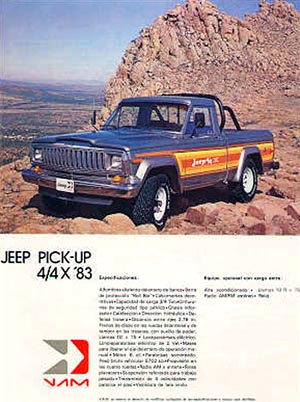 Unfortunately recession and devaluation of the Mexican peso in 1982 spelled the beginning of the end for VAM, which ended up as a subsidiary of Renault de Mexico, who decided not to put the XJ into production. Renault ended Jeep production in 1986 and pulled out of the country in 1987.

By 1991 Chrysler had begun limited Jeep exports to Mexico from the U.S., and Daimler-Chrysler now has a subsidiary known as Jeep de Mexico. 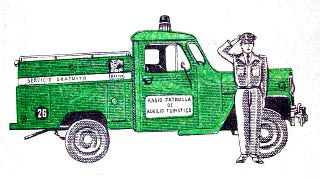 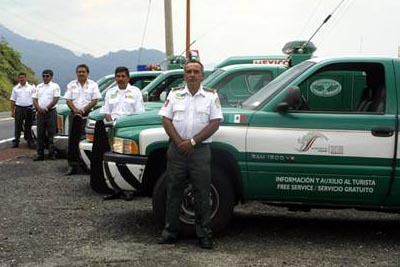 The experiment using Jeep vehicles was clearly successful, as the original Green Fleet grew into what today is known as Angeles Verdes, or Green Angels. As of 2007 the fleet of Green Angel trucks numbered 1,800, although recent photos don't show any Jeeps.

Thanks to Salvador Diaz, Former VAM Chief Product Planner, for information from his "History of VAM" published 1997-98 in AM-Xtra, the magazine of the AMC World Clubs. Thanks also to Gary Anderson for locating those articles. -- Derek Redmond