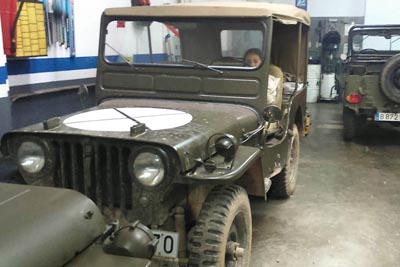 The first jeeps that arrived in Spain were a few Willys MBs and Ford GPWs, via Canada in the late 1940s and early 50s. But in 1953, after the U.S.A. established relations with Francisco Franco's Spain, a vast amount of material began to arrive, including M38s and CJ-3As.

This army surplus CJ-3A was photographed in Camprodon: Jeep Capital of Spain by Josep Bordas in 2018. See also CJ-3As in service with the Spanish Foreign Legion in Jeeps in the Spanish Sahara. 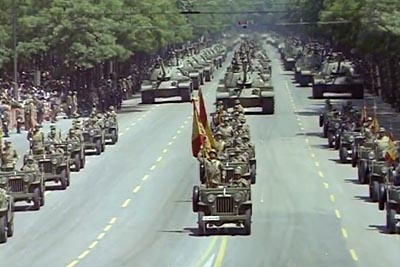 As American military bases were established in Spain, M38A1s, M170s and M606s were also supplied to the Spanish Army. Then from the beginning of the local manufacturing of Jeeps in Spain in 1960, by VIASA ("Vehículos Industriales y Agrícolas, S.A."), the production was oriented to the needs of the Spanish Army.

The Army used a large number of VIASA CJ-3s, and I have heard the military model referred to as "CJ-3M" but I have not seen any confirmation that VIASA or EBRO used that designation. A small fleet of them is seen in this undated parade photo. 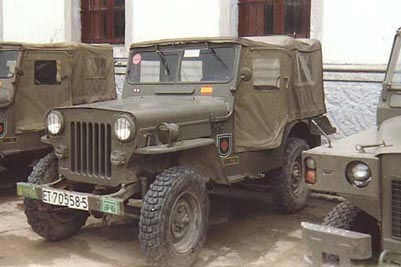 As of 1994, the Spanish army was apparently still using Jeeps produced by VIASA as well as later by EBRO, alongside newer vehicles. This one was photographed by M.A. Escudero at a military base at Zaragoza in 1994. This Jeep belonged to the mountain engineers unit of "Division Navarra" (the shield), and was assigned to a lieutenant (two small stars on the windshield frame). 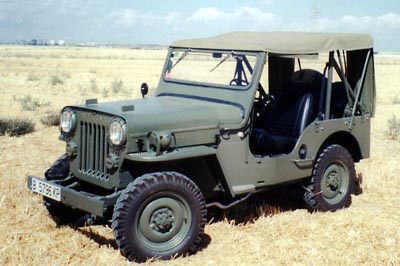 The early production units, such as this 1961 Jeep restored by Sergio Lwoff, were known as "Willys Viasa" and had the Willys stamping on the hood and tailgate. The ventilating windshield and dual electric wipers are original, as are the blackout lights, headlight guards and bumperettes. A right side photo (70K JPEG) shows the bracket for two 5-liter jerry cans. The engine is an F-134 rebuilt by the Army in 1981, and Sergio had the 24-volt electrics converted to 12-volt.

The seats, jerry cans, rear view mirrors, rollbar and canvas top are not original. Likewise the Willys stamping in the grille; Sergio obtained it via the CJ-3B Bulletin Board and had it welded in. (He also thanks Bulletin Board readers who helped him out with gauges, dash light and and dash plates.) The 6.00 x 16 military tires were made in Turkey. 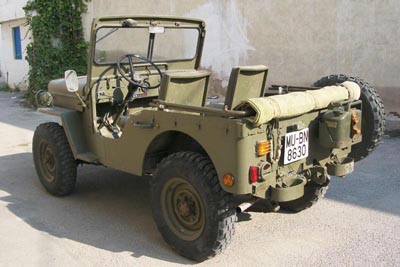 Through most of the 1960s and 70's, the VIASA military models used Perkins and Barreiros diesel engines, and are identifiable by the location of the gas tank on the right side, and conical (not flat) steering wheel. In addition to headlight protectors and blackout lights, the miltary version had a rear pintle hook and lifting rings.

This Jeep, unrestored and largely original, has frame number 503601 and was purchased as surplus in 1996 by Juan-Reyes Martinez Rafecas.

See details of another Willys-VIASA Army Diesel CJ-3B, now in the UK. 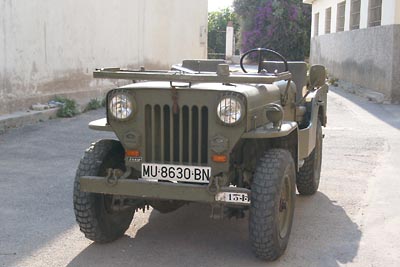 Juan-Reyes says, "It works perfectly and it has 50.000 km, the reason why its small Perkins is in the best condition. My dream would be to have free time to rehabilitate it completely. I envy those happy owners of Jeeps that have had sufficient time to carry out those wonderful reconstructions."

In the larger copy (70K JPEG) of the front view photo, the small "Jeep" logo can be seen below the right front marker light.

A rear view photo (50K JPEG) of another VIASA Jeep restored by Eusebio Leon shows the jerry can bracket on the left, and the framework for a Willys-style full canvas top.A right side photo (50K JPEG) shows seats over the rear fenders, and a rifle bracket. 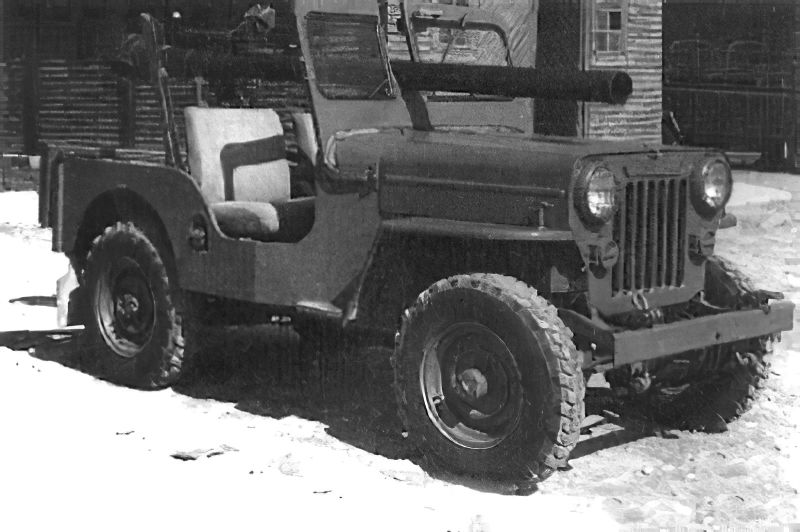 This archival photo shows a Viasa with 106mm recoilless rifle. Similar split-windshield gun-carrier versions were built in India and Japan, although Willys in the U.S. never put this feature on a CJ-3B or M606. 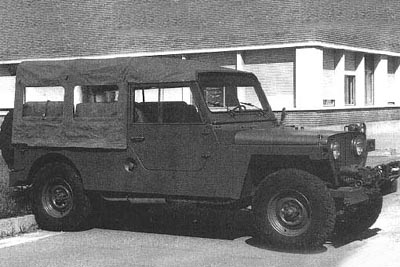 VIASA produced a long-wheelbase civilian version of the CJ-3B which they called the CJ-6 (see Los Jeeps: Made in Spain). But the prototype military version in this photo, a unique design with a low-hood front end and a mechanical winch, was never put into production.

These archival photos are courtesy of Francisco M. Díaz, originally published in in the Spanish off-road magazine Auto Aventura. 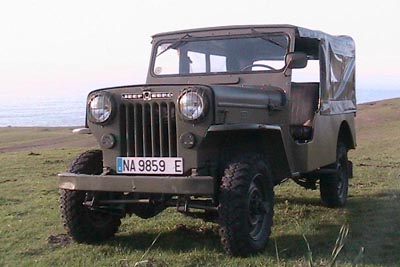 VIASA was absorbed by EBRO in the late 1970's, and their CJ-3B was renamed "Jeep Ebro". This Ebro in olive drab appears to be an early long-wheelbase example. It still has the VIASA windshield vent and JEEP stamping on the hood, and is owned by Ignacio Goikoetxea. A rear view (100K JPEG) reveals other differences from the VIASA version, including both civilian and blackout taillights, and a swing-away spare tire carrier. 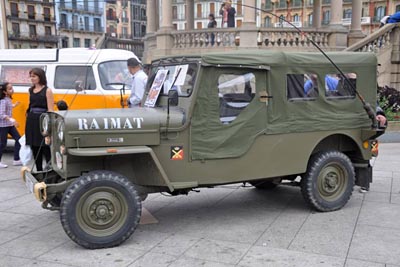 A later version carrying the "Bravo L" long-wheelbase badge on the hood, was photographed by John Carroll at a Pamplona car show. It has been nicely restored including full-length canvas top. 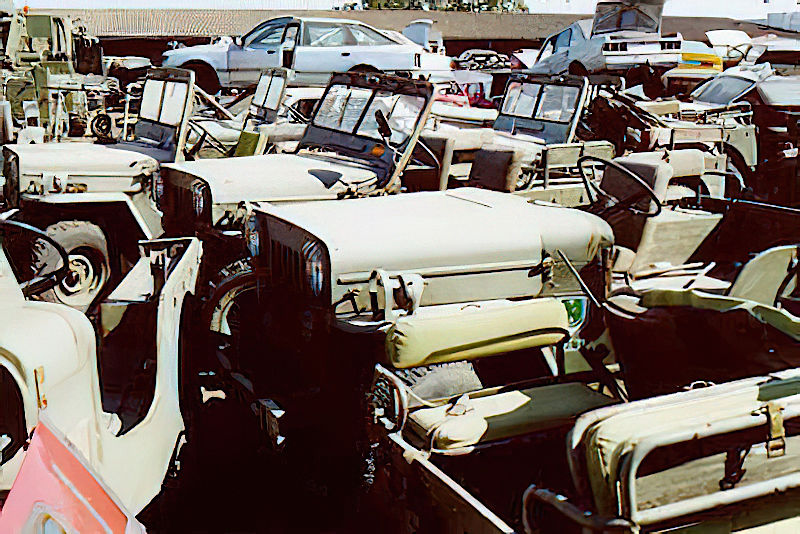 This photo taken by Paul Heijstee in 2002 shows surplus Jeeps in a Spanish scrapyard waiting for disposal. Many of the surplus units are exported for sale in other European countries. So far the Jeeps seen here are luckier than some other Jeeps (30K JPEG) photographed by R. Flores Yoldi in Ermua (Vizcaya), in 1991. 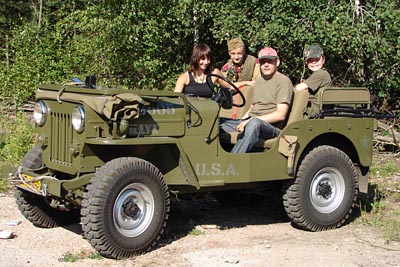 This example made it to Poland, where it was restored and painted by Marcin Klamerek in 2004. This Ebro of undetermined year is immediately recognizable as Spanish Army by the large front blackout lights. See also a nice photo of Marcin taking it out for a drive (220K JPEG).

Thanks to all the Jeep owners who contributed photos for this page. -- Derek Redmond

See also Jeeps Around the World on CJ3B.info.

Last updated 16 May 2019 by Derek Redmond redmond@cj3b.info
https://cj3b.info/World/Spain2.html
All content not credited and previously copyright, is copyright Derek Redmond